Oldest Trees in the United States

Looking for data on the oldest trees in America and where they’re located? Great! You’re in the right place! For this campaign, the Tree Triage Team analyzed thousands of pieces of data from MonumentalTrees.com to: 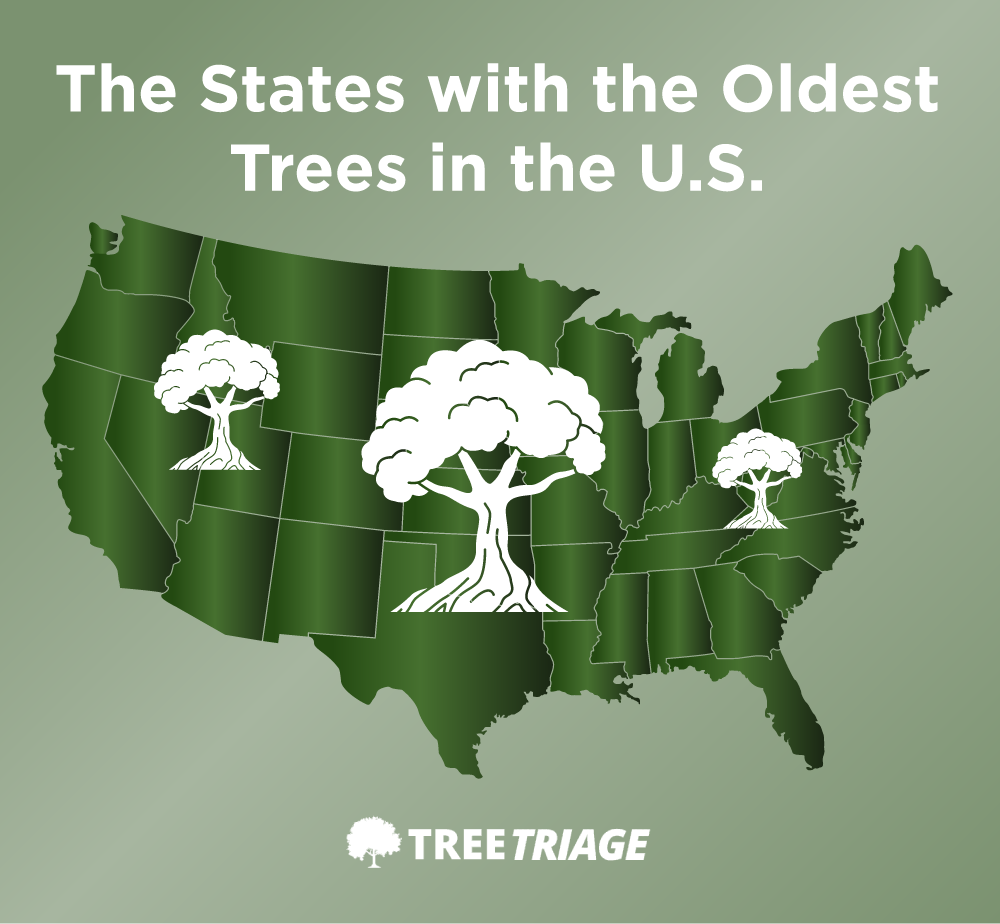 Large, old trees make up some of the most beautiful tourist attractions across the United States. With a healthy interest in ancient trees ourselves, we wanted to determine where the forests of the oldest trees are concentrated across the U.S.

If you’re an old tree lover, you’ve come to the right place! We conducted an analysis of age records uploaded to MonumentalTrees.com in order to determine the states with the oldest trees in the U.S., their average ages, most common species, and more!

Our first goal in this data study was to find out which states had the highest concentration of ancient trees. This data set was a bit challenging to find, as the term “ancient” as it pertains to trees doesn’t suggest a specific age, but rather an age well above the average age of trees of the same species.

To find where these ancient trees existed in the U.S., we scoured the data available from MonumentalTrees.com, where thousands of arborists and tree enthusiasts catalog trees across the nation. This is the most complete ancient tree archive available. We noted the location of each ancient tree and sorted them by state to find which area in the U.S. offers the best chance of locating one.

Our next goal was to figure out just how old the ancient trees in each state were and the species to which they belong. With thousands of age records available, we were able to average the age of all ancient trees using our previously acquired data sorted by state.

Finally, we set out to determine precisely where in the country the most ancient trees are found. We took our compiled data and sorted by specific location, including forests, nature preserves, and cities. We were able to determine the 20 best places to visit to see ancient trees in America.

The States With the Most Recorded Ancient Trees

First, our research team decided that it’s most useful for tree enthusiasts and tourists to know which state offers the highest number of ancient trees to visit.

Interestingly, only 26 states are home to ancient trees, so if you’re in search of these beautiful tourist attractions, you’ll automatically be limited to about half the country.

California is absolutely the state to be in if you’re looking to visit old trees. There are an incredible 103 ancient trees located throughout the state, which is nearly triple what any other state has to offer.

In fact, the seven oldest trees in the entire country are all located in California. They are:

On the other side of the country, the state with the second-highest concentration of ancient trees was Pennsylvania, with 35. The oldest tree in Pennsylvania pales in comparison to all of those in California. However, the 600-year-old Chinkapin oak in Oley, PA, is still a sight to behold.

After Pennsylvania came Virginia with 23, Washington with 19, Ohio with 14, and Florida with 12. These six states are the only ones with more than ten ancient trees total.

On the other end of the spectrum, seven states tied for last place with just one ancient tree each: Connecticut, Delaware, Iowa, Kentucky, Louisiana, South Carolina, and West Virginia.

The Average Age of Ancient Trees by State

Next, we wanted to pinpoint the best state to go to see some of the oldest trees in the country. As such, we took our collected data and averaged the age of all ancient trees within each state.

With only four ancient trees in the entire state, North Carolina took first place with an average ancient tree age of just under 1,400 years old. Two of these trees are under 150 years old, while the other two are over 2,500 years old.

In a close second place was Arkansas, with an average ancient tree age of nearly 1,250 years old. Arkansas has just two ancient trees that make up this impressive average: one just over 2,500 years old and the other just over 400 years old.

In a distant third place was Arizona, with an average age of 883 years. All other states came in with average ancient tree ages under 500 years old.

Notably, California, the state with the most ancient trees by far, had an average age of only 453 years.

In last place came the District of Colombia with an average age of just over 35 years, followed by Indiana with 81 years. All other states have average ancient tree ages over 100 years.

The Most Common Locations for Ancient Trees in the US

Finally, we got a bit more granular and sorted our data based on more specific locations. This step allowed us to hone in on the forests, groves, nature preserves, gardens, and cities with the highest concentration of ancient trees.

Unsurprisingly, the highest concentration of ancient trees in a specific area is in California. The California State Capitol Museum in Sacramento is home to an incredible 28 ancient trees, making it the best place to go if you’re in search of older species and a once-in-a-lifetime photo opportunity.

In second place with fewer than half that number was Balboa Park in San Diego, which houses 12 more ancient trees.

It came as no surprise that the specific locations with the third, fourth, and fifth highest number of ancient trees were also in California:

All of the other top 20 locations came in at just two ancient trees each.

Arborists and tree enthusiasts have been cataloging trees of all ages throughout America for more than a century now. Back in 1875, the American Forestry Association (AFA) was founded to protect trees from widespread development. Within just two decades, the AFA managed to make tree conservation a national effort, and more than 13 million acres were placed under federal protection.

As early as 1921, efforts were already being made to expand the tree canopy in several states with mass plantings. These efforts have continued to today, with the Global ReLeaf program being founded in 1988 by the AFA to replace millions of trees cut down for development or destroyed by wildfire.

Unfortunately, ancient trees, in particular, are not federally protected. However, many states and local municipalities legally protect their ancient trees from damage and removal and go to great lengths to keep them alive and healthy.

Tips for Caring for Old Trees On Your Property

While you probably don’t have a tree that’s thousands of years old on your property, you might have one that is considered ancient and demands some conservation efforts of your own. Old trees not only provide a number of benefits to the environment and home to wildlife, but they also offer shade and bring some unique and interesting history to your property.

One of the best ways to keep your old tree thriving is to ensure it gets the proper amount of water. The larger and denser a tree is, the more water it needs to survive. If you live in an area that might be providing insufficient water, consider watering around the base of your tree regularly and adding a mound of mulch around the trunk to help keep the soil moist.

You can also do wonders for old trees by having them pruned regularly. When done correctly, tree pruning will help your tree use its resources for the healthiest growth possible, avoid pest infestation and tree diseases, and gather the most sunlight possible to maintain good health. Pruning trees the right way can be challenging, so feel free to contact our certified and highly-trained arborists to get the job done the right way.

Finally, you can inspect your tree once a month or so for signs of problems, including any damage from tree pests or tree diseases in your area. Common symptoms of an infestation or infection include unusual wilting, early color changes, dead branches in the canopy, physical damage to the bark, holes in the trunk or larger limbs, and damaged leaves. Report any new or worsening symptoms to an arborist like ours immediately for prompt treatment.

Wrapping Up: Major Insights and Conclusions

The data acquired during our study should largely speak for itself: California is, by far, the best place to be in America if you’re looking to visit ancient trees. The state has three times the number of any other state, and the seven specific locations with the highest concentrations of ancient trees are all located in California.

Generally speaking, you’ll find the most ancient trees in states near the east or west coasts, including California, Pennsylvania, Virginia, Washington, and Florida.