Most Dangerous States To Be A Tree Trimmer

Looking for tree trimming accident statistics? Great! You’re in the right place. For this campaign, the Tree Triage team analyzed data from the Occupational Safety and Health Administration (OSHA) to determine:

Many jobs are hazardous, but did you know that, in 2019, it was reported that tree care is the 4th most dangerous job in the country? Tree trimming and tree removal are potentially unsafe jobs that require the care of a professional, but where do the most issues occur, and how do they affect tree professionals and homeowners? 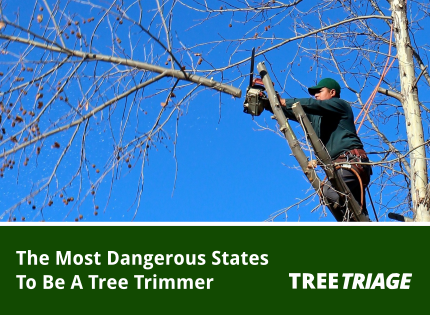 Our team at Tree Triage launched this study and looked at 20 years’ worth of OSHA data in an effort to understand where trimming-related accidents are taking place most often, including fatalities, injuries, and total incidents. This study is crucial for aspiring tree professionals and also for homeowners, as accidents often lead to property damage and the potential for personal injury.

To collect the most complete and accurate tree trimming accident statistics, we looked at every accident report filed with OSHA and related to tree care over the past 20 years. Any incident noted between September 23, 2001 and September 23, 2021 was analyzed for severity and cause. We broke these accidents up into three categories: injuries, fatalities, and all incidents combined.

To portray relative danger in each state accurately, we compared the data from OSHA with population data from 2020 and weighed overall danger based on incidents per 100,000 people. This helps control for population and avoids highly populated states — where tree trimming is needed far more often — from scoring unusually high.

Unfortunately, there is no way of confirming or collecting data on unreported tree trimming accidents, so this is a potential pitfall when completing this type of report. However, it’s reasonable to expect that areas where reported incidents are high will also have a higher occurrence of unreported incidents. As such, our insights and conclusions would likely not be affected even if it were possible to include unreported incidents as well.

Lastly, our conclusions for the most dangerous states for tree trimming give some added weight to fatalities, as these types of accidents are naturally much more catastrophic. However, fatalities are also far more likely to be reported than minor injuries, so we limited the weight given to them to some extent when identifying the most problematic states.

Our first goal was to identify the number of injuries related to tree trimming in each state across the country. Injuries can range from minor abrasions to broken bones and even paralyzation, so we weighed these carefully based on how often our team believed they were likely to happen and be reported.

Interestingly, the two states tied with the second most overall injuries — Maryland and Oregon — had only 14 reported injuries in the last 20 years.

On the other end of the spectrum, there were an incredible 18 states that have had no reported tree trimming injuries in the last 20 years:

Of these 18 states, six have populations over 5,000,000 — Alabama, Colorado, Indiana, Minnesota, Mississippi, South Carolina, and Tennessee. That puts them each at a little less than a sixth of California’s population, but the lack of any injuries is still statistically significant.

Next, we analyzed OSHA data over the 20-year period that included reports of a fatality from tree care. These reports weigh more heavily on our overall assessment of the dangers of tree trimming for obvious reasons.

Sadly, only seven states reported no fatalities over the past 20 years: Alaska, Montana, New Mexico, Nebraska, North Dakota, South Dakota, and Wyoming. Vermont and Washington D.C. were in a close second, with only one reported fatality over the 20-year span. Exactly half of all states reported five or fewer deaths related to tree trimming, meaning there are one or fewer every four years.

California once again reported the highest numbers, with a staggering 105 fatalities from September 23, 2001 to September 23, 2021. That puts the state at an average of 5.25 deaths per year from tree care incidents.

Finally, we looked at the overall number of tree trimming accidents by U.S. state, which includes all reported injuries and fatalities over the 20-year reporting period.

Four states have zero reported incidents: Montana, New Mexico, North Dakota, and Wyoming. All of these states are in the bottom third of state population, with Wyoming having the lowest population in the entire country and North Dakota coming in at the sixth least populated state. Still, zero incidents over 20 years is noteworthy.

Unsurprisingly, given the previous data, California had the highest number of overall incidents by far, with a total of 401. Even when controlling for population, California reports the highest number of tree trimming incidents per capita. It’s the only state that has greater than one death per 100,000 people — averaging 1.01 — with the next highest state — West Virginia — averaging 0.67 incidents per 100,000 people.

For comparison, the state with the second-highest number of overall incidents was Florida, with only 88 total and 0.44 accidents per 100,000 people. That means an accident is nearly five times more likely to happen in California than any other state and around 20 times more likely than the average throughout the country, which is 20.62 total over 20 years.

The statistics we pulled from OSHA are rather harrowing and really drive home how dangerous tree trimming is for both tree trimming professionals and the homeowners who hire them. To help improve overall safety for both parties, the Tree Triage team put together some tips for best tree trimming practices.

One of the simplest things you can do as a tree trimming professional to improve safety in the workplace is to read the OSHA Tree Trimming Safety Manual. It includes information on how to use tools and equipment properly, and it can quite literally be life-saving.

Of course, putting the safety measures in the manual into practice on every job is just as crucial. Never attempt to complete a job without the required gear and safety equipment, even if it seems straightforward and safe. Some of the worst accidents can occur from basic negligence, so always take the proper precautions.

Always inspect the tree carefully before climbing and cutting. Dead or damaged branches could snap or fall in unexpected ways, so read the tree before attempting any trimming.

Lastly, always maintain sound footing and never cut above you. These two simple tips are easy to follow and can limit injuries and fatalities on every job site.

As a homeowner, you might think getting your trees trimmed poses no threat to you or your family, but you would be mistaken. Falling branches and limbs can hit anyone and anything, so always stay far enough away from the work site so that there’s no chance of getting hit with debris. If possible, stay inside and away from the side of the house where trimming is taking place.

You can improve overall safety for professionals, yourself, and your home by hiring licensed experts with years of experience. Tree trimming is not an area where you should look for the lowest possible cost. Some companies may charge more for expert service, but they’re far more likely to have the experience to get the job done safely. Paying professional arborists like the ones on our team for tree trimming will help reduce the likelihood of an accident.

Wrapping Up: Significant Insights and Conclusions

With that being said, West Virginia reports the most fatalities per capita, with 0.45 for every 100,000 people. Still, the overwhelming number of total accidents in California makes it the most dangerous state for tree trimming accidents.

The four safest states for tree trimming are Montana, New Mexico, North Dakota, and Wyoming. All four states haven’t reported a single injury or fatality to OSHA during the 20 years for which we pulled data, from September 23, 2001 through September 23, 2021.

What’s causing the regional differences when it comes to tree trimming accidents? Whether it’s regulations, training, or local practices, it’s something our industry needs to dive into further in order to keep our arborists as safe as possible across the country.

If you want to minimize the risk of a tree trimming accident occurring on your property and the risk of damage to your home and other personal property, hiring experienced and licensed professionals is one of the best things you can do. You can contact our team at Tree Triage for tree trimming services that are safe, guaranteed, and come with decades of experience and all necessary and recommended safety measures.