22+ Statistics and Facts You Need to Know About Wildfires

Are you wondering how deforestation is affecting the health of the planet’s trees? 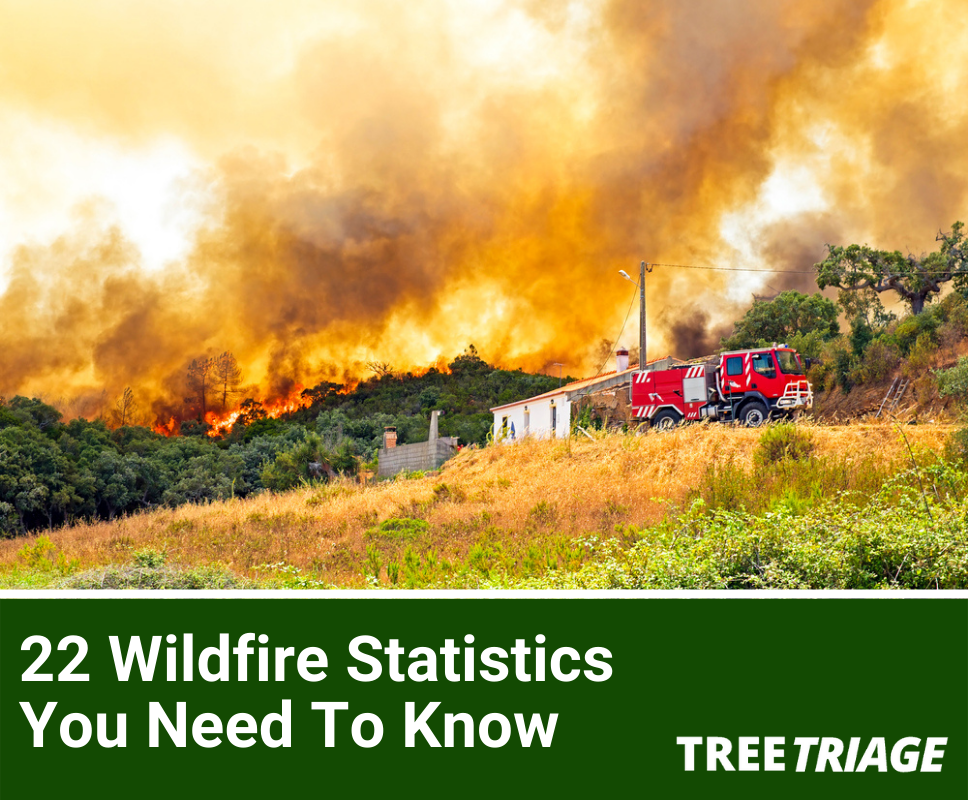 So, if you want to understand more about how wildfires impacting the planet and how it can impact your own area, keep reading!

In the United States, wildfires are increasing, both in frequency and impact. According to Insurance Information Institute, these fires burned 10.1 million acres of forest in 2020. In the previous year, the figure was 4.7 million acres. The same source reports that in the initial six months of 2021, there was an increase of 20% in the number of wildfires recorded compared to the same period last year.

The fires referred to above do not only affect remote wilderness areas; they are increasingly causing damage in residential areas. This is a view supported by the numbers. In 2020, around 17,000 structures were destroyed by wildfires, and over half of these structures were residences.

From the numbers above, it’s clear that we have a wildfire problem on our hands. We can only make good decisions on what needs to be done to deal with the challenge if we have as much relevant information as possible. Consequently, this article aims to share some statistics and facts about wildfires.

We hope that by realizing the scale of the problem, you will become more conscious of the human conduct that leads to wildfires and that you will do your part to alleviate the challenge they pose.

What Are Wild Fires?

When properly controlled, a fire can be an extremely useful tool. At the most basic level, fire provides energy that can be used for heating spaces or cooking. On a bigger scale, controlled fires can be used to clear large pieces of land for agriculture.

Planned fires are known as controlled burns, and they are often managed according to the law. The individuals and entities responsible for such fires invest the resources required to ensure that the fire they start remains controllable at all times until it has accomplished the job for which it was started. It is then properly extinguished.

While some fires are controlled and benefit humans, animals, and plants, many spiral out of control, destroying everything in their path. This kind of fire is known as a wildfire, defined by National Geographic as “an uncontrolled fire that burns in the wildland vegetation, often in rural areas.”

Natural factors or human activities can cause wildfires. However, when we look at the numbers, it becomes clear that humans start most wildfires.

Out of every ten wildfires that cause damage to forests or property, nine are started by people. The Insurance Information Institute identifies specific human activities that cause wildfires: “campfires left unattended, the burning of debris, downed power lines, negligently discarded cigarettes and intentional acts of arson.”

If human activity is responsible for 90% of all wildfires, nature is responsible for 10%. Natural wildfires have occurred for thousands of years. National Geographic notes that it is because of this that “certain plants and animals have evolved to depend on periodic wildfires for ecological balance.”

In an article published by the journal Frontiers in Ecology and the Environment, Juli Pausas and Jon Keeley present some of the benefits of natural wildfires. They write, “Wildfires generate open habitats for a diversity of light-loving plants and animals; these species offer a range of goods and services (food, fiber, pollination, tourism, hunting) to humans.”

Pausas and Keeley add that “wildfires help to control pests and catastrophic fires, contribute to the regulation of biogeochemical cycles, and can benefit plants in adapting to novel climates.”

A common way used by nature to start a wildfire is a bolt of lightning. The world experiences between 40 and 50 flashes of lightning every second, culminating in 1.4 billion lightning flashes per year. Some of these flashes start wildfires.

The Florida Department of Agriculture and Consumer Services provides a clear explanation of how nature can start a fire. It says, “Lightning fires occur when the lightning bolt strikes outside the area of rainfall, or it ignites dry fuels that smolder through the rain shower and begin to burn as the area dries out following the shower.”

According to the World Health Organization, hot ashes from volcanoes can also start wildfires. The same organization reports that “Volcanic activities and wildfires affected 6.2 million people and caused nearly 2,400 deaths between 1998 [and] 2017.”

How Hot Are Forest Fires?

The University of Utah’s Natural History Museum provides some numbers indicating how hot wildfires get. It reports that “An average surface fire on the forest floor might have flames reaching 1 meter in height and can reach temperatures of 800°C (1,472° F) or more.”

“Under extreme conditions, a fire can give off 10,000 kilowatts or more per meter of the fire front,” says the University of Utah’s Natural History Museum. Adding that “This would mean flame heights of 50 meters or more and flame temperatures exceeding 1200 °C (2,192 °F).”

Extent of Area Burned by Wildfires

An analysis of available statistics shows that the number of wildfires and miles burned increases every year. But how bad is the situation? The Congressional Research Service provides a graph indicating that in 1991, there were about 30,000 recorded wildfires. In 2020, the number was around 100,000.

The United States Environmental Protection Agency indicates that “The extent of area burned by wildfires each year appears to have increased since the 1980s.” Adding that “of the 10 years with the largest acreage burned, all have occurred since 2004, including the peak year in 2015.”

Another interesting dynamic noted by the United States Environmental Protection Agency is that “Fires burn more land in the western United States than in the East.”

The Congressional Research Service also reports that “In 2020, 58,950 wildfires burned 10.1 million acres, the second-most acreage impacted in a year since 1960; nearly 40% of these acres were in California.” The same organization says that “As of August 6, 2021, nearly 39,000 wildfires have impacted over 3.4 million acres.”

The Cost of Wild Fires

The U.S. Fire Administration (USFA) is responsible for collecting data from different sources to provide an idea of how extensive the fire problem is in the United States. Based on the data it collects, the USFA reports that in 2019, there were 1,291,500 fires, resulting in 16,600 injuries and 3,704 deaths. All the fires in that year resulted in damage estimated at $14.8 billion.

While the number of fires and injuries for 2019 reported by the USFA shows a decrease, it is concerning that compared to 2010 figures, the number of deaths is up by nearly 25% and the losses incurred shoot up almost 75%. This could indicate that we are not better at managing wildfires today than we were in 2010.

The National Centers for Environmental Information reports that the Western Wildfires and the California Firestorm in the summer-fall of 2017 cost $19.6 billion and led to 54 deaths.

An indication that the wildfire problem in the U.S. continues to worsen is the amount of money spent by the U.S. Department of Agriculture’s Forest Service on wildland fire suppression: $2 billion. Usda.gov quotes Sonny Perdue, the United States Secretary of Agriculture from 2017 to 2021, who shows how bad the situation is.

Perdue is quoted saying, “Forest Service spending on fire suppression in recent years has gone from 15 percent of the budget to 55 percent – or maybe even more – which means we have to keep borrowing from funds that are intended for forest management.” He adds that this creates a vicious cycle where his department remains with no money to prevent fires.

Where Are the Wildfires Happening?

If you have never witnessed the devastation of a wildfire firsthand, it’s easy to feel emotionally disconnected and view wildfires as something remote. However, anyone living in California, where brutal wildfires are common, will tell you about the devastation caused by a fire out of control.

InsuranceBusinessMag.com compiles data from the National Interagency Fire Center (NIFC) and creates a ranking of wildfire acreage burned in 2018:

The title of a document produced by the World Wide Fund For Nature (WWF) reads “Fires, forests and the future: a crisis raging out of control?” This indicates that the wildfire problem is likely to get worse in the future.

The WWF says that “Climate change and wildfires mutually reinforce each other, and the fires burning today in many parts of the world are bigger, more intense, and last longer than they used to.” Adding, “If current trends continue, there will be devastating long-term consequences on people, wildlife, and the climate.”

In our own small ways, each of us can become part of the solution by ensuring that we reduce the proportion of fires started by humans. We could also act in an environmentally friendly way to reduce the pace of global warming, which has been linked to an increase in the number of wildfires and the damage they cause.