Looking for affordable tree removal service in New Berlin, WI? Great! TreeTriage is at your service 24/7. 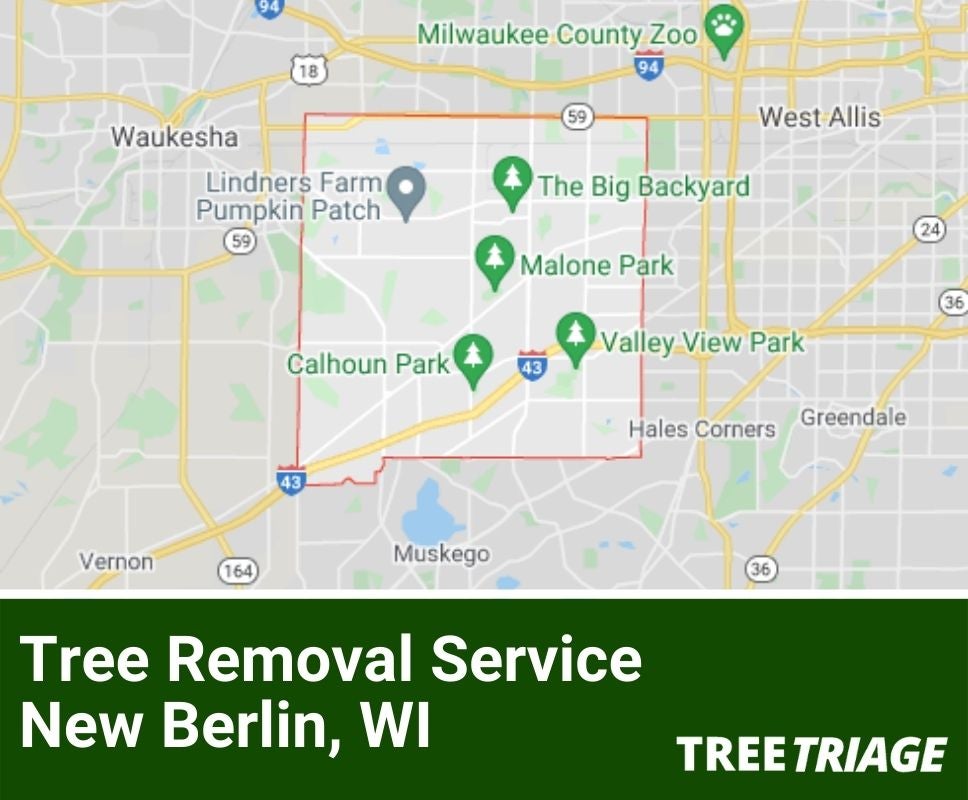 Tell us about your project in the form and we'll get you connected with specialists in or continue reading to learn what you should consider when removing a tree in New Berlin.

What Are the Most Common Tree Issues in New Berlin?

There are several variables in assessing the health of a tree and how best to treat it. Our arborists have to ensure that any diseases are treated, pests removed, tree growth regulated, roots pruned, and soil fertilized.

Anthracnose is a fungus that causes black lesions called cankers on most of the tree’s foliage. The word means “ulcer-like sore” and is diagnosed by the symptoms rather than a specific fungus that causes it. The trees most often affected are sycamore, ash, oak, and evergreen elms. It is widespread all over Wisconsin due to the amount of moisture that the state gets.

Cedar Apple Rust is another fungal disease that attacks apple trees. It is one of several fungi from the genus Gymnosporangium. It is a unique disease because it needs both cedar and apple trees to complete its life cycle. The disease starts in cedars and then spreads to apple trees.

Leaf Spots is another disease that is common in New Berlin. This disease is actually caused by three different fungal infections cylindrosporium, phyllosticta, and septoria. They create round spots on leaves, which eventually turn the leaf yellow and black. Many trees in New Berlin are susceptible to this fungus but it can be controlled by anti-fungal treatments.

Needle Blight, formerly known as Dothistroma pine needle blight, was first discovered in Illinois in 1941 and quickly spread to Wisconsin. It infects needles one to three years old, turning the needles brown and eventually endangering the tree.

Oak Wilt is yet another fungal infection that affects an oak’s ability to circulate water to its foliage. The fungus is extremely aggressive and spreads quickly from oak to oak, and it needs to be dealt with swiftly. Sadly cutting down infected trees still leaves the infection in the roots, where it can spread to other trees. One way to stop the spread is to stop pruning your red or white oaks when temperatures hit above 50 degrees until the end of July. Root graft barriers may be needed to stop the spread of this aggressive fungus.

Japanese Beetles were first seen in New Jersey in 1916 and voraciously attacked various plants including grass, milkweed, and various trees. Japanese Beetles have migrated widely and can now be found in most states east of the Mississippi River. These beetles only live a year and spend most of that underground before becoming active from June to August. This pest is all over southeastern Wisconsin and must be dealt with quickly because they do a lot of damage.

Another beetle is the Emerald Ash Borer; it bores holes in ash trees to lay eggs. When the eggs hatch, the larvae interfere with the tree’s ability to circulate water and transport nutrients. Finally, the beetle starves the tree, and it dies.

Gypsy Moths were discovered in the United States in 1889 and made their way to Wisconsin sometime in the 1980s. Gypsy Moths feed on hundreds of different types of trees and shrubs, making them a more dangerous pest than most invaders, limiting themselves to certain species of tree. Gypsy Moth populations tend to go dormant for a while before exploding all at once about once a decade. Many counties participate in an annual gypsy moth suppression program to keep potential devastation as low as possible.

Does the City of New Berlin Provide Any Assistance in Tree Removal Problems?

New Berlin went through a landscaping boom from the 1960s to the 1980s due to the increase in population. Many of the trees are 40 to 60 years old, and if they are on public land, they are the responsibility of the New Berlin Forestry Service.

Generally, a private owner is responsible for removing his own trees; however, if the tree is considered a nuisance or danger to the city, it will be cut down by the Forestry Service and the person will be billed for the cost. It says in the City of New Berlin Municipal Code §185-14. Elimination of Public Nuisance “The abatement of the Public Nuisance may be performed by a contractor on behalf of the City. In the event that said costs are not paid within 30 days of the billing, the costs may be pursued as a special charge for current services pursuant to the procedures as set forth in Wisconsin Statute § 66.0627.”

Who Is Responsible For Fallen Tree Removal in New Berlin?

New Berlin takes tree illnesses and pests very seriously, and the Forestry Service may remove a tree if they feel it is a danger to the surrounding trees, even on private land. However, the homeowner is still responsible for the cost of removal, whether done by the homeowner or the Forestry Service. Generally, you are responsible for your own property.

If you are a homeowner, not only do you have to remove fallen trees that are on your property, but you are also responsible for any damage that they cause. Most homeowners, however, have insurance, and depending on the policy, some expenses may be covered by the insurer; however, this coverage rarely covers the tree removal costs itself.

Suppose you rent in New Berlin, Wisconsin, and a tree has fallen. In that case, the property owner is responsible for tree removal and any damages the tree might have caused if it fell. If a fallen tree damaged your private property, you might also be eligible for compensation.

Any tree removal, trimming, pruning, or other maintenance of a tree or shrub on any rented property in New Berlin is the responsibility of the person or persons who own the property. If you own more than one property, then you are responsible for those as well. It is the landlord’s responsibility or property owner to maintain all trees, shrubs, bushes, lawns, and other types of landscaping.

Our arborists can be called in to determine whose property the damaging tree came from and they will be financially responsible for any damage it caused when it fell.

How Does the Soil Affect Trees in New Berlin?

Heavy rains, high wind, and the cold are the biggest threats to trees in New Berlin. Heavy rains, especially in areas with organic texture, cause high runoff eroding the soil and damaging trees. Heavy winds are also a problem in Wisconsin and can uproot trees, causing damage. Frost damage is also common in Wisconsin due to falling temperatures.

What If Dead Trees Are Near Power Lines in New Berlin?

The Forestry Service is responsible for ensuring that dead trees that are near power lines are removed. However, they are only responsible for trees near generators or high voltage lines. Low voltage lines that go into private residences are still the responsibility of the owner, but we can help remove them safely.

How Much Does Tree Removal Usually Cost in New Berlin?

Tree removal is expensive no matter what you do. Naturally, the smaller the tree, the less expensive it will be, but you still pay for the danger involved and the difficulty of the labor. Even worse, there are often unforeseen difficulties in tree removal, making the final price, on average, almost always more than the estimate. The minimum to remove a tree in the area is about $150, with a maximum of about $2,100, and an average price of between $500 and $700. Anyway you look at it, it will be expensive.

Naturally, some factors can affect the price, making them higher or lower (sadly usually higher), and it’s helpful to know what these factors are before you decide to have your tree removed.

Generally, the easier a tree is to get to, the less the price will be. If the tree is in your front yard, well away from other trees, and has space available for a truck to park, it will be cheaper than a tree in your backyard surrounded by other trees with no available space for our trucks or equipment.

The size of the tree matters. The bigger the tree, the more expensive it will be to remove and the more dangerous the job is. If the tree is big enough, you may end up paying the maximum to have it cut down.

Usually, healthy trees are good, but not when they are being removed. You can expect to pay much more for removing a healthy tree than a dead tree. Dead trees tend to be lighter, bringing down the price considerably.

Recent Requests We Received From Customers In New Berlin, WI

We have 2 ~ 45 year old Silver Maples in our back yard. They had a major overhaul a few years back but need some trimming and we would be interested in a quote.

Looking for a quote on removal of 2 large maple trees, 1 small dead pine tree and clean up of 1 maple and 1 pine tree please.

I need two spruce trees cut down and stumps grind out, in my back yard. Thanks!

Tree trimming only. We will take care of the down branches and clean up.

Tree removal at east side of lot at bottom of driveway marked.