What Are The Biggest Trees In America?

Are you wondering what the biggest trees in America are? 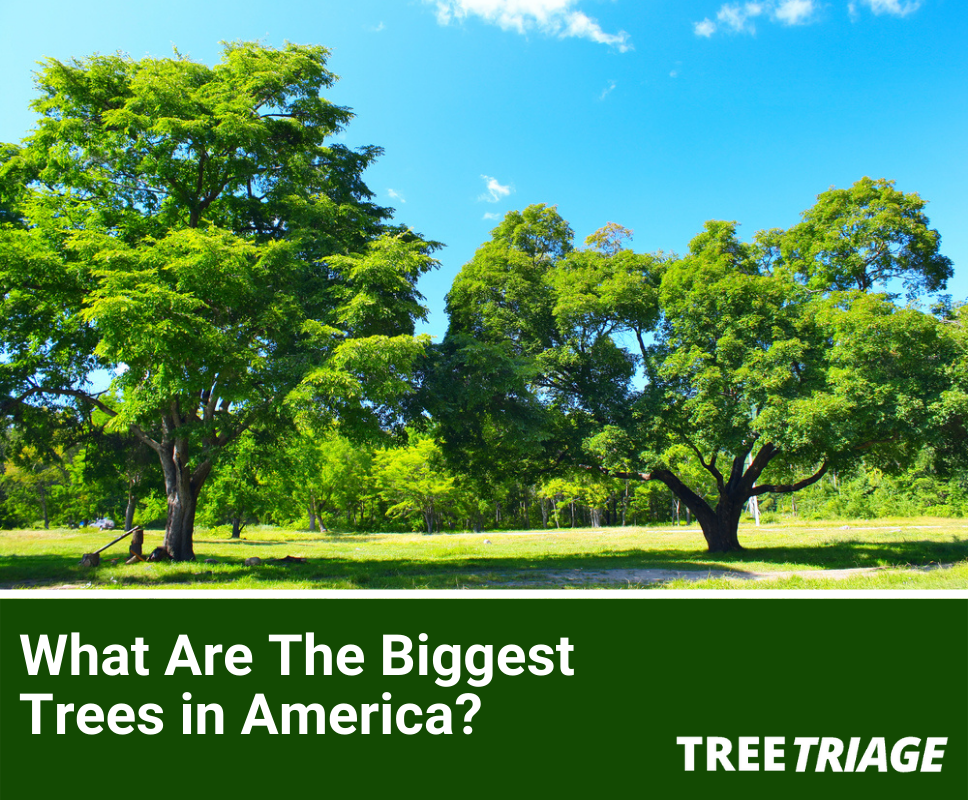 So, if you’re looking to learn about the giant trees in America and how to support their growth so they can support our ecosystem, keep reading!

Today, trees are the answer to most human and environmental challenges. For example, they capture carbon dioxide, produce the clean oxygen we breathe, provide food and medicine, create beautiful urban spaces where people can meet and exercise, and reduce the risk of floods. However, trees are easy to ignore, and many people don’t think twice before getting rid of one.

In the United States, to make people more conscious about the importance of trees, a non-profit organization called American Forests established an initiative known as the National Champion Trees Program. The organization’s goal is to get the public involved in forestry activities.

American Forests reports that “The call to search for America’s biggest trees first came in the September 1940 issue of American Forests magazine, where concerned forester Joseph Sterns published his article ‘Let’s Find and Save the Biggest Trees.’” It adds, “Sterns wasn’t referring to the famous and historic trees that were already protected, but the giants left standing in virgin forests.”

Today, the Big Tree Program (also known as the Champion Tree Program) is active in all 50 US states and the District of Colombia. Many countries have adopted it as a model for their own programs.

The Champion Trees program focuses attention on trees and the role they play in our lives. American Forests explains why the program matters: “With a greater understanding of what forests do for us all, we can encourage greater support to protect and restore these valuable resources.”

The organization then describes what trees do for us, including balancing the ecosystem, cleaning air and water, regulating the climate, and providing medicine, food, and shelter. American Forests adds that trees provide greener urban centers that encourage healthy social interaction.

Forests also encourage people to interact with the outdoors, facilitating healthy lifestyles as people participate in activities like hiking, cycling, and jogging.

What Does It Take To Be America’s Biggest Tree?

For a tree to become the biggest of its species in America, it has to be discovered, measured, and nominated.

According to American Forests, “National Champion Trees can be discovered in rural and urban landscapes, scattered throughout forests and fields, along roadways and in backyards.” Therefore, a champion tree could be right there where you live.

The process of nominating a tree begins with determining the category of the tree. According to American Forests, “Species must be recognized as either native or non-native and naturalized in the United States.” The organization adds, “Hybrids, cultivars, ornamentals, and varieties are excluded.”

The list provided by American Forests is based on sources like the Integrated Taxonomic Information System (ITIS) and the USDA Plants Database.

Still Happy With the Tree You Want to Nominate?

Before a nomination can be accepted, the final task is to contact a Champion Tree State Coordinator in your area. These coordinators check the tree’s health, identify the species, and confirm the measurements. Americanforests.org provides a list of these coordinators every year.

When it comes to trees, America can be considered wealthy. Estimates put the number of trees in the country at 228 billion. This places the country in the fourth position after Russia (642 billion), Canada (318 billion), and Brazil (302 billion).

But which ones are America’s biggest trees?

Lake Quinault Spruce Tree: A plaque next to the Quinault Lake Spruce reads, “World’s Largest Spruce Tree.” This is not surprising if you consider that the tree contains 17,650 cubic feet (500 cubic meters) of wood.

Lake Quinault Cedar: Seattletimes.com reports that “At 174 feet tall, its base is almost as wide as a two-lane road and dwarfs hikers who can only lift their heads in wonder at a giant that has stood since the time of Jesus.”

Hyperion: At 379 ft (115.55 m), it’s no wonder that the redwood found in Redwood National and State Parks is the tallest tree in the world.

Pando: In a report about Pando, Abc.net.au writes, “It’s a huge underground singular root system that sends up tens of thousands of clone aspen trees, each one genetically identical to the next, over an area of more than 100 acres.”

General Grant: According to the US National Parks Services, the General Grant Tree is the second-largest tree in the world.

Patriarch: This tree, thought to be 1566 years old, is described by the US Forest Services as the world’s largest bristlecone pine.

The fact that trees are life is hard to dispute. Everyone can take action to ensure that trees grow to their biggest in the most suitable environment.

American Forests invites you to take action and be “a voice for forests by asking your elected officials to support legislation that will restore forests.” The organization adds, “Pledge to be a forest champion.”