Looking for affordable tree removal service in Olympia, WA? Great! TreeTriage is at your service 24/7. 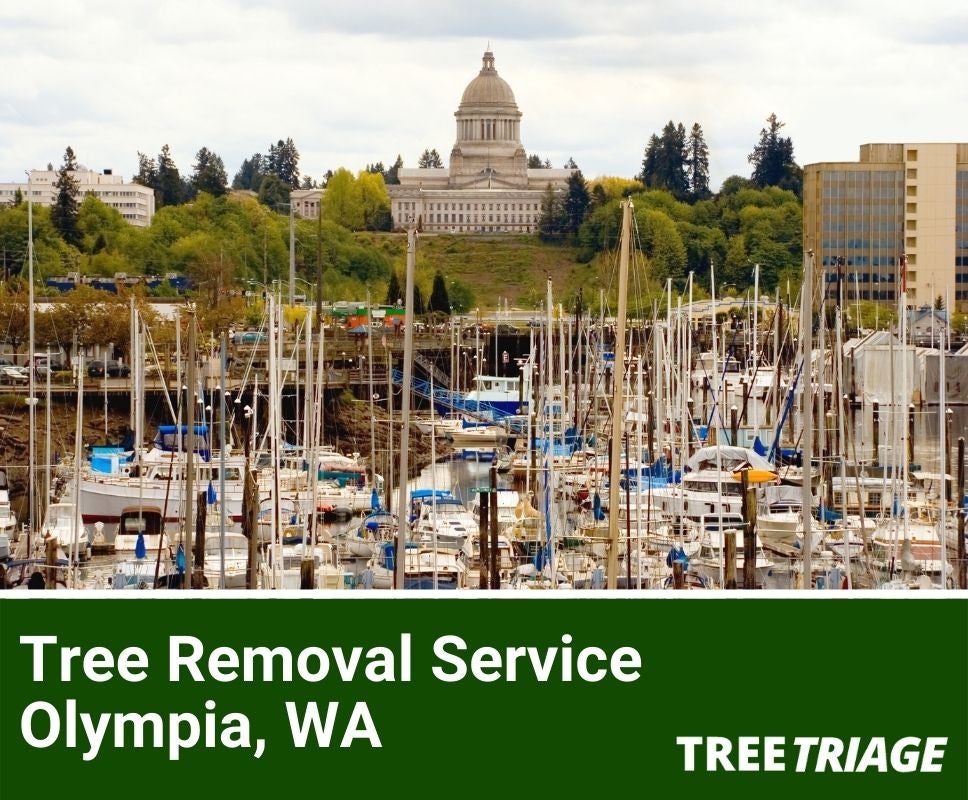 Tell us about your project in the form and we'll get you connected with specialists in or continue reading to learn what you should consider when removing a tree in Olympia.

What Are the Most Common Tree Issues in Olympia?

With so many biotic and abiotic damaging agents found in the trees of Olympia, the likelihood of root disease damage has increased. Warmer, drier conditions are stressing trees and creating an unknown future for the forests of Washington.

The most common tree issues in Olympia and its surrounding areas include:

According to the Pacific Northwest Region of Forest Health Protection, the foliar disease has affected over 512,000 acres of Washington forest land. It is detectable by yellows spots on leaves that eventually turn reddish-brown. As weather conditions continue to change and wet conditions transition into summer, the fungi have favorable circumstances to infect the host tree. When bacteria, viruses, and other fungi attack the foliage, the result is devastating. Species that are the most susceptible include the Monterey, Ponderosa, and lodgepole pines.

All species of trees, including the conifers and hardwoods of Olympia, are susceptible to root disease that causes tree rot. It occurs when the structural integrity of the roots and base of the tree are destroyed by adverse weather conditions, multiple species of fungi, or pest infestation. The most common diseases include:

According to the United States Department of Agriculture (USDA), the threat from common pests is a concerning issue with trees in Olympia. Insects, mites, and other defoliators, such as the elm leaf beetle, will remove needles and destroy deciduous and evergreen trees. Pine bark beetles are responsible for the devastation of millions of trees each year. Mountain pine beetles attack the lodgepole, ponderosa, and western white pine trees. The emerald ash borer beetle is responsible for the destruction of tens of millions of ash trees in 30 states.

The Asian gypsy moth was recently detected in Washington State. The non-native species feed on more than 500 species of trees. Egg masses with yellowish fuzz create voracious caterpillars that grow to 3.5 inches. The mature caterpillar has two rows of red and blue spots on its back.

If your trees are showing any signs of these destructive invaders, please contact us at Tree Triage to determine the best course of action.

Does the City of Olympia Provide Any Assistance in Tree Removal Problems?

For the past 26 years, the City of Olympia has been designated as “Tree City USA.” Recognized for its Urban Forestry programs, the city has a longstanding tradition of caring for its trees. The dedicated team oversees street tree planting, inspections, and the pruning or removal of hazardous trees that impeach the City’s right-of-way. They is a wealth of information for the builders, developers, and homeowners of Olympia.

A city ordinance (OMC 16.60) requires homeowners to maintain a minimum number of tree units on their property. If removing a tree from a residence falls below the specified amount, the homeowner must apply for a tree removal permit. Applicants must submit a $50 fee along with detailed plans for replanting the number of tree units on their property to meet the minimum requirements. The newly planted trees must be a conifer that is at least four feet tall or a single stem deciduous tree with a 1.25-inch caliper six inches above the root collar.

The City of Olympia created an ordinance to protect small stands of mature trees throughout its community. The tree tracts were turned over to Homeowners’ Associations to oversee. In 2011, the Urban Forestry Program saw the need to intervene and, through a grant, created a Tree Tract and Greenbelt Stewardship guidebook to help residents better understand the needs of caring for trees in and around their communities.

Who Is Responsible for Fallen Tree Removal in Olympia?

When a tree falls and causes damage, the injured party is responsible for contacting their insurance provider to file a claim. The owner of the tree is not held liable.

Washington law prohibits a resident from cutting, trimming, or removing a tree from a neighboring property that does not belong to them. Those in violation of this law are subject to three times the amount of damages if the property owner decides to take legal action.

If a fallen tree damages your personal property, it is your responsibility to contact your insurance provider. You are not held liable for any damage if the tree fell due to a weather incident or other “act of God.”

Renters are not responsible for tree removal. The landlord must handle all issues regarding fallen trees and provide preventative service if a suspicious tree may cause potential damage to the renter’s property.

In most cases, renters do not have the right to remove trees from a property that does not belong to them, without the landlord’s written consent.

As in most states, landlords in Olympia are responsible for the maintenance of all trees, shrubs, and hedges on their rented property. They are held liable to make sure all trees are safe for occupants.

If a tree from your neighbor’s property falls and damages your property, you must contact your insurance provider. Some homeowners have to pursue legal action when a neighbor ignored the risk and did nothing to prevent the damage.

Washington State law allows property owners to trim tree branches that encroach on their property line. They may not pass the line, and if the trimming causes significant and irreparable damage to the tree, they will be held liable for timber trespass.

How Does the Soil Affect Trees in Olympia?

Vegetation in the region includes hardwoods, conifers, and grasses. The elevation is 100 to 500 feet with an average temperature of 50 degrees and annual precipitation of 40 to 55 inches.

The Tokul soil, consisting of volcanic ash, is the official soil of Washington state. It is one of the most productive soils in the country, supporting hearty forests of Douglas-firs, hemlocks, red cedars, and various fir species.

A Thurston County survey revealed the soil in the region is deep, well-drained, and mostly level. Limitations include wetness, low strength, and slope. There are 25,000 acres in the county designated for urban use, with the remainder used for pastures, crops, homesites, and woodlands.

Olympia is warm and wet in the spring and early summer. Extremely hot days are rare because of the winds coming off the Pacific Ocean. Winters are typically cold, but freezing temperatures are isolated to higher elevations.

According to the Washington State Department of Natural Resources, changing climatic conditions, with drought as a primary driver, is negatively affecting the vast forestry of the area.

What if Dead Trees Are Near Power Lines in Olympia?

Homeowners are urged to contact Puget Sound Energy (PSE) to report tree limbs that are too close to overhead power lines.

A PSE-certified arborist will assess the situation with no cost to property owners. Trees within a 12-foot radius of the power lines will be trimmed or removed. Homeowners should not attempt to cut a tree near a power line, even if it is on your property. Avoid a power outage or dangerous situation by contacting the energy company.

PSE spends $12 million annually to maintain trees in the community. To offset tree removal, they spend $500,000 a year to plant new trees.

How Much Does Tree Removal Usually Cost in Olympia?

The average cost of tree removal in Olympia is $800, ranging between $290 to $1,300, sometimes more. There are varying factors that play into the overall cost.

Height of the Tree

The cost to trim a tree ranges between $187 to $250 per hour based on one of our three-person crews.

If the tree is in a difficult-to-access location on your property, the tree removal cost will be higher. If a crane is needed or active power lines surround the tree, the price will be significantly more.

Condition of the Tree and Location

If the tree is in poor condition or emergency service is required, the final cost will reflect the situation. If the tree is already down and not affecting a structure, the price to remove it will be substantially lower.

Recent Requests We Received From Customers In Olympia, WA

We have four or five-year-old trees that need to be trained they are hybrid fruit trees.

Have a maple tree I would like to get cut back.