Looking for affordable tree removal service in Gig Harbor, WA? Great! TreeTriage is at your service 24/7. 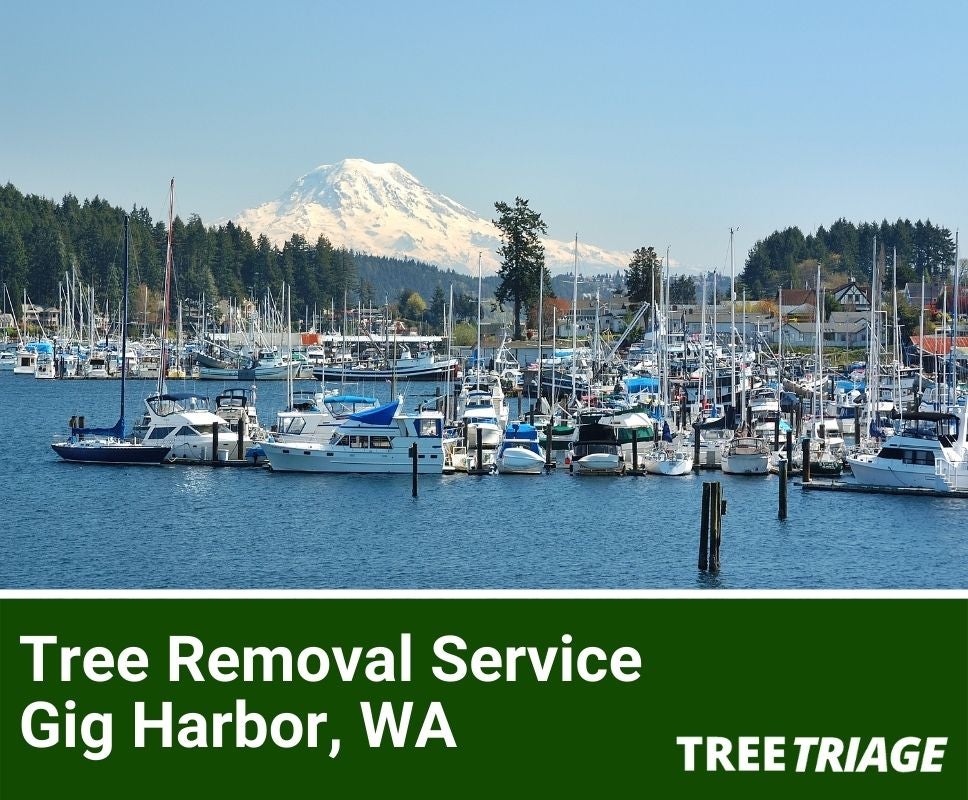 Tell us about your project in the form and we'll get you connected with specialists in or continue reading to learn what you should consider when removing a tree in Gig Harbor.

What Are The Most Common Tree Issues In Gig Harbor?

As a town in the Pacific Northwest, healthy, tall, and dense trees are a common sight in Gig Harbor. Evergreen ferns, Douglas Firs, Cedars, Cypress, and Hemlock are some of the common species you will find on this side of Washington State. With proper maintenance, these trees can last a lifetime despite being constantly threatened by invasive species and diseases.

Invasive tree species compete with native trees for space and resources. They reproduce and spread fast because they lack natural pests and predators to regulate their populations. As a result, they often displace the native species from their natural habitat, resulting in an ecological imbalance.

Other than invasive plants, trees in Gig Harbor are also susceptible to several diseases. When the diseases are not discovered and treated on time, the tree is likely to die and necessitate removal.

Here are the top four diseases that affect trees on this side of the Pacific.

As for pests, two types of beetles are common in Gig Harbor: the Emerald Ash Borer and the Bronze Birch Beetle. The two cause severe damage to ash and birch trees by boring holes inside a tree and feeding on leaves and foliage. The effects of the beetles are irreversible and necessitate tree removal by our professional arborists to prevent the spread of insects.

Does The City of Gig Harbor Provide Any Assistance In Tree Removal Problems?

The City of Gig Harbor acknowledges the many benefits of trees in the environment. Thus, there is a code of ordinance to protect and preserve trees in the area. The city, therefore, regulates the removal of trees on private property by requiring homeowners and contractors to obtain approval from the city. You must also have a recommendation from an ISA-certified arborist like Tree Triage for your request to be approved. Failure to obtain prior approval for the removal may attract hefty fines and a code enforcement investigation.

At the same time, Pierce County’s road crews are at the residents’ service to remove fallen trees and debris along county roads, especially after a windstorm. You can call (253) 798-6000 or submit a Request for Action Form to request the removal of downed trees or debris blocking major roads, like arterials and state highways, and sidewalks.

Who Is Responsible For Fallen Tree Removal In Gig Harbor?

Tree removal codes, processes, and ordinances vary from city to city and state to state. There also exist member association guidelines that govern this process to minimize tree removal disputes. Here is an explanation of who is responsible for tree removal in Gig Harbor.

Washington state law expects every homeowner to take care of every tree on their property. Therefore, you must be proactive to ensure you remove any dead, stressed, or damaged trees so that they do not cause any harm to others. If a tree falls and damages your home or another insured structure on your premises, homeowners’ insurance compensates for damages and covers the removal costs.

As a renter, it is not your responsibility to remove any fallen trees in the rental property. You are also not liable to damages caused by a fallen tree if you did not damage the tree. However, you need to inform your landlord if you notice a diseased or damaged tree on the property. The landlord’s property insurance will reimburse damages on the property and pay for tree removal. In contrast, your renter’s insurance coverage covers the damage to your belongings.

Property owners are typically responsible for tree maintenance and removal, so the responsibility of removing a fallen tree is entirely theirs. But their property insurance caters for losses and removal should the said tree destroy insured property and structures.

Washington has strict laws stemming from court decisions that govern neighbors and trees. As a property owner, you have to bear the costs of your neighbor’s tree falling on your property and causing injuries or damage.

Your homeowner’s insurance policy could help cater to the damages and removal costs. However, if your insurer finds some level of negligence from your neighbor, they may pursue your neighbor’s insurance.

But keep in mind, insurance coverage is limited to the tree causing structural damages. Otherwise, you will have to call us to figure out the removal costs on your own. You can also negotiate this with your neighbor or involve your Homeowner’s Association management to help settle the matter.

How Does The Soil Affect Trees In Gig Harbor?

Soil structure and composition determine the health and development of plants in an area. That’s because the soil is the anchor that holds a tree in place and is the foundation that delivers food, water, nutrients, and air to plants.

Gig Harbor soils are known as Tokul. These volcanic soils are loamy with a gravelly texture and a rich iron, aluminum, and organic matter content. They are very productive and support the growth of evergreen plants.

Unfortunately, these soils have a thick cemented layer consisting of volcanic ash 20 to 40 feet below the ground, limiting the rooting depth and water flow. The soils also have a high water retention capacity, increasing the possibility of soil compaction during wet winter months.

Windstorms are a common phenomenon in most of Pierce County. It is intense in areas where many large trees have been cut, and thus, the few remaining trees are left without defense from harsh winds.

Over the years, the windstorms have resulted in numerous deaths and costly structural damage resulting from fallen trees and branches. Additionally, multiple bridges have been brought down, and residents have had to endure periods of power outages. Fortunately, Gig Harbor residents do not need to worry about tornadoes because the Pacific Ocean moderates the climate in the city.

What If Dead Trees Are Near Power Lines In Gig Harbor?

Federal law requires utility companies to have a qualified line clearing crew to maintain trees within a 10-foot radius of powerlines. Peninsula Light Company and Puget Sound Energy are the primary suppliers of electrical energy in Gig Harbor. Both companies take it upon themselves to remove dead trees too close to power lines to maintain safe and uninterrupted service.

They also routinely trim and prune said trees every 3 to 4 years at no cost to prevent power outages and reduce safety hazards. You must contact your utility provider immediately when you come across a downed line or a dead tree near a power line. In the meantime, stay at least
10 feet away, and don’t be tempted to touch the tree or the downed lines as you risk being electrocuted.

How Much Does Tree Removal Usually Cost in Gig Harbor?

The cost of tree removal in Gig Harbor is $500 on average. However, this price may vary between $200 and $1,800 depending on the difficulty, time taken to complete a job, and other factors discussed below.

We will typically charge you more to remove trees near structures, rivers, or cliffs. These require extra precision and are riskier to remove than trees in an open area. Trees in such locations also need special equipment, like cranes and a bucket truck, which add to removal costs.

Contrary to popular belief, it is more expensive to remove a dead or dying tree than a healthy tree. That’s because while our tree removal teams can climb up a healthy tree with ropes to cut down the branches, our crew will need special equipment to bring down the weak and unhealthy tree. It is also quite challenging and takes more time because the team needs to ensure that the tree does not topple over in any direction. It is also important to note that it will cost you less to remove a fallen tree in an open area than when it falls on a structure.

Larger and taller trees cost more to remove because they involve more work and take more time to bring down. For instance, it will take longer for us to bring down a 60-foot tree than a 20-foot tree, and there is more wood to cut after it is down. This size difference could cost you as much as a few thousand dollars.

Recent Requests We Received From Customers In Gig Harbor, WA

Just planted two Yellow Long Neck fig trees. I need a care and feeding guide so I get the best results.

We have a dead madrona in our back yard that we need cut down to about 20 feet tall.

9 trees surrounding the house taken down.

I want to remove trees in my yard.