Looking for affordable tree removal service in Staunton, VA? Great! TreeTriage is at your service 24/7. 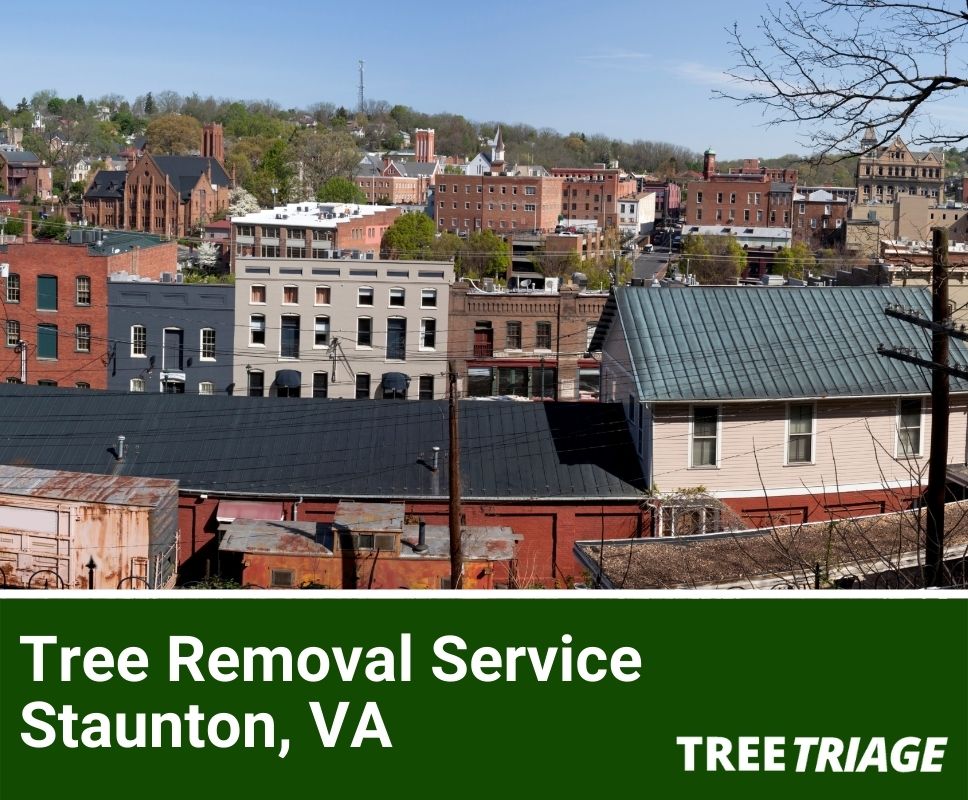 Tell us about your project in the form and we'll get you connected with specialists in or continue reading to learn what you should consider when removing a tree in Staunton.

What Are the Most Common Tree Issues in Staunton?

Staunton is shaded by hundreds of tree species. American elm, eastern hemlock, red maple, green ash, black walnut, and flowering dogwood are just a few trees you will come across along the city’s parks, gardens, and streets. However, the trees are often under threat from various sources.

Some of the common issues include:

Staunton’s tree pests are as diverse as its species. From sap-sucking aphids, spider mites, and scale insects to trunk boring beetles, the city’s trees are never safe. The risks usually heighten where the trees are weak, either from diseases or weather stress. Emerald ash borers (prevalent among black, white, and green ash trees), scale insects, hemlock wooly adelgids, spider mites, bagworms, leaf-eating caterpillars, spotted lanternflies, and gypsy moths are the most active pests on Staunton’s canopies.

Invasive species are pretty destructive as they compete with the surrounding plants for nutrients to the point of depriving them. Usually, invasive plants are quite aggressive as bad weather and soil conditions do not deter them from growing.

Common invasive plants in Staunton include giant hogweed, tropical soda apple, and the tree of heaven. The latter also aids the spreading of spotted lanternfly infestation to the surrounding trees as it’s the insect’s favorite host.

Staunton trees are affected by a range of diseases, which are both bacterial and fungal infections. Some conditions are also more prevalent during cold and wet weather, such as boxwood blight, powdery mildew, anthracnose, etc. Other examples of diseases include thousand cankers disease (a bacterial infection spread by the walnut twig beetle), Dutch elm disease, and oak wilt (usually affects even non-oak trees).

Does the City of Staunton Provide Any Assistance in Tree Removal Problems?

The city is responsible for maintaining public trees and removal. However, before removing or permitting anyone to remove such trees, the city must inform the landscaping advisory board of their intention through a written notice. The board often has 30 days to approve the request or suggest an alternative.

In case of an emergency such as hazardous (dead, dying, trees near power lines) or obstructive trees, the city can forgo the approval process. However, all removed trees must be replaced either at another public place or on private property, with the owner’s consent.

Who Is Responsible for Fallen Tree Removal in Staunton?

Fallen tree removal responsibility in Staunton rests on the tree’s owner. This means the city is responsible for removing fallen public trees, while private landowners should remove their fallen trees.

Essentially, a tree belongs to the owner of the land where the trunk grows. That means a tree with a trunk sitting on both sides of a boundary belongs to the adjoining owners. As such, they’re responsible for its care and removal.

However, there are instances where the removal responsibility shifts from the owners, such as a situation where the tree destroys insured property. In such a case, the insurance compensation covers the removal costs alongside the covered damages.

As a homeowner, you’re responsible for caring for the trees on your property including removing those that fall. However, if your home is in a managed community and the HOA bylaws restrict tree removal, you should inform the community manager. But generally, if the tree destroys insured property, you can count on the insurer to pay for the removal costs.

Generally, tenants are not responsible for the property’s fallen trees. This is usually the landlord’s responsibility. However, it’s always advisable to take renters insurance coverage to protect your personal belongings from destructions that may result from, say, a fallen tree. This is because the property insurance does not cover the tenants’ items.

Landlords are responsible for maintaining trees on their property, including removing those that fall. The only exception is where the rentals fall within an HOA community, and the bylaws restrict tree removal. In that case, the community manager should direct the removal process. But if a tree destroys property covered under homeowners insurance, the compensation should cover the removal expenses.

A neighbor’s trees can be pesky sometimes, especially those near the boundary line. Invading tree roots, falling leaves, broken branches, and the like are often your responsibility. However, state laws allow neighbors to trim encroaching trees up to the boundary line. But you shouldn’t overdo the trimming as this may harm the tree.

That said, the neighbor is usually not liable if the tree falls and damages your property. Unless you can prove they had neglected the tree, you should file a compensation claim with your insurer. In most cases, the homeowners insurance compensation covers the removal expenses.

How Does the Soil Affect Trees in Staunton?

Soil quality usually determines the health of the trees that grow in it. On top of providing support, it stores and supplies nutrients and water to the roots. Well-drained and deep soils promote optimal tree growth, while shallow and poorly drained soils contribute to poor tree health.

Mainly, soils exist in three main grain sizes and quality, which are clay, loam, and sand. Sandy soils are well-drained but poor in water and nutrient retention. As such, trees growing in highly sandy soils may have stunted growth.

The same applies to clay soils, which are on the extreme opposite. Due to their tiny grains, they tend to absorb and retain water. A high concentration of soil moisture usually encourages diseases such as root rot. Poorly drained soils also tend to be highly acidic, which inhibits optimal tree growth. Essentially, most trees prefer neutral pH levels.

Loamy soils are usually the best choice for tree growth. Like the clay and sandy types, they also exist in different variations. For instance, Staunton soils range from sandy loam to clay loam, loamy, sandy, and clay.

The weather has a significant impact on tree health. When the conditions are favorable, trees thrive and become stronger. On the other hand, bad weather interrupts their normal growth.

Usually, thunderstorms, floods, strong winds, and drought affect Staunton once in a while. For instance, strong winds often leave trees wounded with broken branches and twigs. Wounds weaken a tree’s health and also attract insects that perch and feed on the sap. On the other hand, flooding results in excessive soil moisture, which increases the chances of root infection and mold growth.

But generally, the city’s climate is warm and temperate, with enough rainfall to support flourishing plant life. This gives the trees favorable conditions to recover from the weather damage and bounce back to health. Winters are also a blessing as they are cold enough to help in pest population control.

What if Dead Trees Are Near Power Lines in Staunton?

Trees near power lines are the most common cause of power outages, especially during stormy weather. However, dead trees are hazardous, regardless of the weather situation. Not only can they cause power interruption, but they can lead to property destruction, injury, and death.

Power utility companies like Shenandoah Valley Electric Cooperative and Dominion Energy Virginia generally have proactive vegetation management policies that ensure trees near power lines are managed to enhance public safety. Though the trimming and removal programs are usually scheduled, they treat dead trees as emergencies. If there are dead trees near their lines, you should report to them immediately for prompt removal.

How Much Does Tree Removal Usually Cost in Staunton?

The cost of tree removal in Staunton ranges between $200 and $2,200, but the average total is often around $700. Generally, a removal quote includes cutting and clearing expenses. Stump removal is usually a separate cost that costs an extra $100 to $250, depending on the stump diameter and root depth.

We rely on certain factors to determine the quote. The main ones include a tree’s size, condition, and location.

A tree’s size determines the amount of time and removal method required. For instance, cutting a 20-foot tree may not require much effort. Clearing the debris is also pretty fast, especially if the crown is equally tiny. On the other hand, removing an 80-foot giant or one with a large crown always requires more time and effort. While manual removal is possible in most cases, there are situations where equipment may be required, which adds up to the costs.

Generally, removing a healthy tree is less expensive than a diseased or dead one. As long as a healthy tree is located in an open field, our team can remove it manually by climbing up and roping down pieces. However, hazardous trees (dead, dying, or diseased) are usually too risky to take down manually. Therefore, using a crane or bucket truck is essential to ensure the safety of our crew and your property.

Again, if the tree requiring removal has already fallen, the cost may vary depending on where it’s lying. In the case where a tree falls on an open area, removing it doesn’t require much equipment. But trees that have fallen on top of buildings always need specialized equipment to minimize additional damage to the structure and guarantee our crew’s safety. As a result, you may end up paying extra for the equipment expenses.

Finally, a tree’s location determines how much you spend. Typically, trees overhanging structures and power lines cost more to remove as the risk is higher. This necessitates using special equipment to remove them safely. Likewise, if a tree is in a hard-to-access area, such as a slope, you should expect to pay more. Again, this is because we need equipment to aid the removal.

Recent Requests We Received From Customers In Staunton, VA

We have a tree that is leaning, would like to have it taken down.

Looking to have a tree stump removed from our rear yard.

A quote on cutting down and removing a walnut tree.

I need a pine tree down and stump ground.