Looking for affordable tree removal service in Richmond, VA? Great! TreeTriage is at your service 24/7. 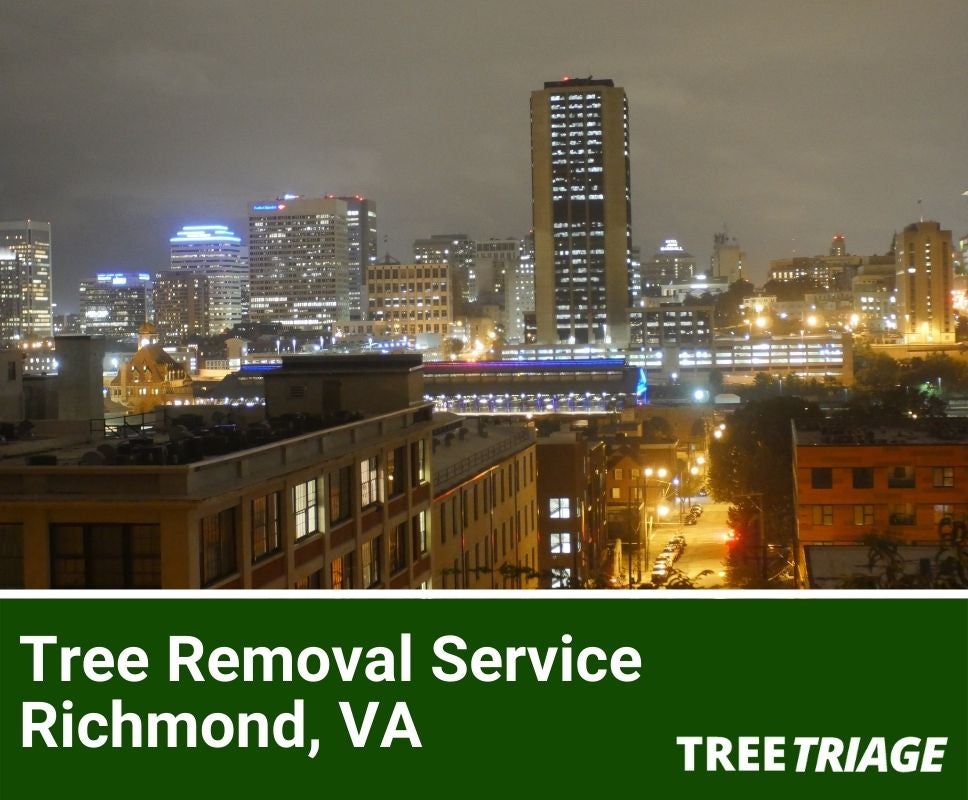 Tell us about your project in the form and we'll get you connected with specialists in or continue reading to learn what you should consider when removing a tree in Richmond.

What Are the Most Common Tree Issues in Richmond?

Richmond, Virginia is an area in which the history of the birth of our nation runs very deeply. As much history as there is and as many historical sites there are to explore, it would be rather hard for anyone visiting this beautiful city to realize that the area of Richmond is a host to some rather deadly diseases that affect the urban canopy. The term ‘urban canopy’ is just another way of saying the trees of the city, and Richmond has a number of them that are constantly under the gun from disease, such as ‘Sudden Oak Death’ to ‘Thousand Canker Disease’. In fact, here is a list of the five most common tree diseases that affect our ‘urban canopy’ here in Richmond.

Other than these common diseases, the trees in the greater Richmond area are constantly threatened by weather patterns. Being this close to the eastern seaboard, Richmond receives threats from hurricane-force winds that can wreck a tree population very quickly. The aging trees of this historical town are also beginning to take a toll on the tree population. Some trees in the greater Richmond area are approaching 200 years old, and those years are starting to show on some of our trees.

Whether you are a native of Richmond or you have recently moved to the area, having a dedicated team of professional tree experts like the ones here at Tree Triage is an essential element of Richmond life.

Does the City of Richmond Provide Any Assistance in Tree Removal Problems?

The tree ordinance for the City of Richmond is a 17-page document that lays out every contingency for tree health, pruning, removal, replanting, and any other activity that may, or may not otherwise interfere with the urban tree population. It is one of those types of documents in which there exists a lot of ‘lawyer jargon’ pertaining to the trees of Richmond.

Within the first couple of paragraphs, you will immediately realize that the City of Richmond cares a great deal about the health and welfare of its trees. This document also states that the Tree Committee for the City of Richmond has the right to approach any tree on private property that is dead or dying or poses a hazardous threat to any human or animal. In essence, you could just sit back and let the City come to you with your own private tree issues.

Who Is Responsible for Fallen Tree Removal in Richmond?

Otherwise, you can simply agree to tackle the issue on your own accord and settle it like an adult and let the high court handle the more serious issues that tend to happen other than tree problems. Basically, the laws are just like they are in most places, whoever owns the land where the root system of the tree is located is the responsible party. No courts. No court dates. Just common sense carried out at the adult level!

This can work two ways. If you rent a home, and for whatever reason, this tree has come down, the responsibility falls on the landowner. Now, if this tree comes down as a result of a storm or from high wind or other natural causes, the City of Richmond will come and clear it away. If you just want the tree removed from the property you are renting because you just don’t like it, you better check with the landowner before taking matters into your own hands. If you remove an otherwise healthy tree without asking permission, those above Supreme Court Rulings kick in, and you could be facing jail time if the landowner wishes to pursue the issue. Oh, and then you would also be fined by the City of Richmond for removal of a tree without a permit. Check with the landowner, if all parties agree, purchase a permit and call Tree Triage for the removal. See how easy that was?

Again, if you are the landlord you are most likely the landowner. Contact the city and have the City of Richmond’s arborist come out and evaluate the situation. If the tree is dead or dying, the city will gladly assist you in the removal. Also, in all of these instances if you are the land/homeowner, check with your homeowners’ insurance carrier as there may be a provision for tree removal, and don’t forget to purchase your permit(s) and applications.

How Does the Soil Affect Trees in Richmond?

Soil plays a very important role in the health and well-being of a tree, and the City of Richmond is blessed with trees, but not so much with soil. The location of the City of Richmond is close enough to the east coast that there is still a lot of sand in the soil. This creates expansive soil which expands and contracts with the water that is available, and since there is so much sand, the water doesn’t drain well and large root systems can weaken.

The Shade Tree Commission started adding certain minerals and other additives in and around Richmond to strengthen the soil. If you add pH robbing additives to the soil system, the soil will in turn gain strength in its ability to sustain healthy root systems. The City of Richmond began to add these components to the soil around the city in inconspicuous places back in 1998. Since then, the number of trees lost as a direct result of the soil has dropped 60% of what was reported in the span of ten years from 1998 to 2008. The City of Richmond still analyzes the soil of the city on a semi-annual basis and adjusts the additives accordingly. We do love our trees here in Richmond.

The weather systems that run through the greater Richmond area play a vital role in the number of trees that come down every year. Being close to the east coast and in the direct path of southern states that produce tornado activity, it is probably a wonder that there aren’t more trees lost to weather than there actually are.

What If Dead Trees Are Near Power Lines in Richmond?

Dominion Energy serves the state of Virginia as their primary electrical utility company. If you want to report a tree that has either come down on a power line or has lost limbs that are lodged on the power line, the best thing to do is to report the problem immediately. The Tree Department of Dominion Energy can be reached at 866-366-4357. There is also their online tool for reporting damaged or downed trees.

Dominion Energy also maintains its right of way that is in direct line with the power lines in and around the greater Richmond area. The Tree Division of Dominion Energy follows a tree trimming schedule, and every tree along the power line grid is inspected, trimmed, pruned, or removed according to the health of the tree that is in the area on their schedule for any given day. If you have an issue with a tree that poses a threat to the power supply in Richmond, you can contact the Tree Division and have them come and evaluate the situation free of charge. If the tree is indeed labeled as a threat, it will be promptly addressed by the Division.

The page of FAQs on the Dominion Energy website can probably answer the questions that you may have regarding tree/power line issues.

How Much Does Tree Removal Usually Cost in Richmond?

Those figures are just a starting point of what your tree removal could be. Those figures include things like:

Those figures do not include any of the following:

Now, let’s take a look at some contributing factors that can make your overall tree removal cost to increase, or in some cases, decrease.

How Big is the Tree?

Those averages above were for a medium-sized tree. The City of Richmond has on their tree ordinance webpage what they consider to be small, medium, or large trees. Given the additional work required to remove larger trees, we will charge more for those behemoths that need to be taken down.

Where Is the Tree?

Is the tree in question in an easily accessed place? If not, there may be additional charges to handle extra manpower or equipment needed to reach the tree for removal.

Is the Tree Already on the Ground?

If the tree has already come down on its own, there may be fewer labor charges than originally quoted. On the other hand, if the tree is still standing and is over 60 feet tall in areas that are hard to reach, the cost will be significantly higher.

Recent Requests We Received From Customers In Richmond, VA

I have several trees I would like someone to look at, and my neighbor has one as well. Hoping to meet with someone asap.

Need a quote. Storm caused trees to penetrate outside shed. Limbs on shed and in yard. Need to be removed ASAP.

Need stump ground down to repair fence. Tree tipped over during ice storm.

Back fence that leads to alley.