Looking for affordable tree removal service in Ashburn, VA? Great! TreeTriage is at your service 24/7. 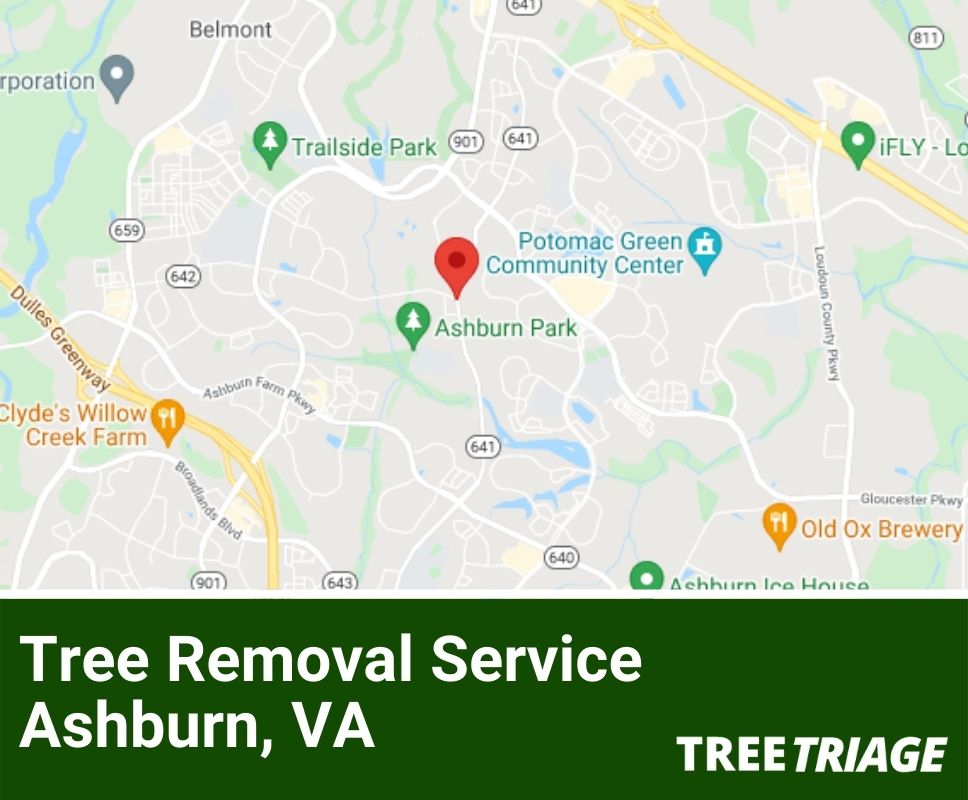 Tell us about your project in the form and we'll get you connected with specialists in or continue reading to learn what you should consider when removing a tree in Ashburn.

What Are the Most Common Tree Issues in Ashburn?

Loudoun County is home to some of the biggest trees in Virginia. These trees, also referred to as champion trees, are as high as 112 feet and have a diameter of up to 15 feet. You can find these in natural forests or private property. A few of the champion trees that grace the streets of Ashburn include the American Sycamore, Norway Maple, Pignut Hickory, Green ash, Hackberry, and American beech.

Because trees adapted to Ashburn’s environmental and climatic conditions, they have been in the area for many decades and some a century or two. Nevertheless, their health and aesthetics are threatened by several issues. These issues include diseases, insects, invasive species, and extreme climatic conditions.

Oak wilt and thousand cankers disease are the two common illnesses that attack trees in Loudoun County and, more specifically, in Ashburn. Oak wilt is a fungal disease and fatal for oak tree species with point leaves and devastating oak trees with round-tipped leaves. It is rampant in spring, affecting mature and young oak trees, and can kill an oak tree in just a few weeks.

A thousand cankers disease is another fungal disease spread by walnut twig beetles. The beetles bore cankers on a tree and deposit the fungus as they make their way through walnut tree species such as black walnut and butternut. It causes yellowing and crown thinning before eventually killing a tree or its parts.

Invasive species are very detrimental to native plant health mainly because they lack native predators and compete with native trees for nutrients, water, air, and space. Annoying invasive tree species in Ashburn include the Tree of Heaven, Bush honeysuckle, Garlic Mustard, and more.

Some deadly insects and pests weaken, stress, or kill trees in Ashburn. The most common insects that attack trees in the area, causing devastating effects, are the following:

Does the City of Ashburn Provide Any Assistance in Tree Removal Problems?

The City of Ashburn adopts the tree conservation ordinances of Loudoun County and the state of Virginia. According to Virginia’s tree conservation ordinance, property owners are allowed to remove trees from their property. However, certain bodies, like your homeowner’s association, Virginia Department of Forestry, or Resource Protection Area, can restrict or regulate tree removal practices.

The state also generally leaves tree maintenance and subsequent removal to property owners but advises residents to call 911 should they encounter a tree that presents a life-threatening hazard.

Moreover, the Virginia Department of Transportation also responds to traffic incidents and can handle tree trimming or removal to ensure safe traveling and reduce traffic congestion.

Who Is Responsible For Fallen Tree Removal in Ashburn?

Trees fall due to various reasons, including disease, damage, stress, age, or acts of nature. Whatever the cause, homeowners, neighbors, tenants, and landlords, are caught off-guard and left to wonder: “who pays for fallen tree removal?”. This guide expounds on this dilemma.

A homeowner pays for fallen tree removal plus damages and injuries associated with the fallen tree if it is evident that they were wholly or partially negligent. If a tree falls due to natural causes, homeowner’s insurance will typically cater to the costs of removal and damage repair.

It is not a tenant’s duty to trim, prune, or remove trees on rental property. Instead, their role is to inform their landlord of any impending risks around the compound such as dead, diseased, or damaged trees.

According to the law, landlords are responsible for the care and maintenance of trees on rented property. This means when a tree falls and a renter does not have anything to do with it, the landlord must pay for repairs and removal out of their pocket or seek assistance from their insurance providers.

When your tree falls on a neighbor’s property and it is not a result of your negligence, their homeowner’s insurance will pay for the damage to property and removal costs. But this is only the case if the fallen tree causes damage to covered properties. Otherwise, you can have an amicable discussion with your affected neighbor to determine how to split the removal costs.

How Does The Soil Affect Trees In Ashburn?

Ashburn consists of marine clay soils which are moderately deep but poorly drained. However, the soil features significant amounts of silt, sand, and loam. These soils are also unstable as they swell when wet and contract during drought periods. This instability causes rooting problems because of the lack of a firm and solid foundation throughout a tree’s lifetime.

Soil erosion is another rampant problem in Northern Virginia. When the top fertile soil is eroded due to harsh weather conditions, construction, or deforestation, organic matter and nutrient content are significantly reduced in the soil. This further affects the productivity of the soil and hampers the growth of healthy trees.

Like the rest of Loudoun County, Ashburn experiences thunderstorms at least 40 days annually, most during the summer months, particularly in the late afternoon or evenings.

Additionally, 5% of the storms are severe and feature violent hail, tornadoes, damaging winds, and flash floods. The strong winds moving at an average of 58 miles will often break or uproot solid and healthy trees as well as dead, diseased, or stressed trees.

Ashburn also receives about 22 inches of snow every year, which is detrimental to trees. Although most trees go dormant during winter, excessive snow can break or split branches and uproot or fall the tree.

What if Dead Trees Are Near Power Lines in Ashburn?

Federal and local governments expect utility companies to maintain and manage any trees or vegetation growing near power lines. When you notice a dead tree near an overhead utility line, you should call your electricity or communications provider.

In Ashburn, Dominion Energy is the primary electricity supplier. To adhere to the local and federal guidelines, the utility company takes charge of trimming and pruning trees too close to their distribution lines.

If a tree is growing dangerously tall, is dead, or weak, the company will remove the tree at no cost, even though it is on private property.

The removal ensures they continue to provide residents with reliable and uninterrupted power while protecting the general public from dangers associated with having a dead tree near power lines.

How Much Does Tree Removal Usually Cost in Ashburn?

In Ashburn, Virginia, the average cost of tree removal ranges between $290 and $2,040. These costs depend on several factors including the tree’s height, diameter, accessibility, the urgency of removal, and the current tree condition. The time it takes to cut a tree and the equipment required for a specific project also affects the price. Here are the main cost factors of tree removal in Ashburn:

Tree height is a significant factor that can help you estimate how much you will pay for tree removal in Ashburn. The removal costs typically go up with the height of a tree because of the equipment, expertise, and time it will take our team to bring down the tree. That said, here are price estimates determined by the height of the tree:

Time of the Year

It is best to remove a dead, diseased, or aged tree immediately to prevent hazards associated with the tree falling. However, if you intend to save some money when removing a healthy tree, tree removal is generally cheaper in winter. But, this is not always the case in Ashburn where our prices depend on how cold the winters get.

We charge more to have weak trees removed from your yard because of the dangers associated with the removal. On the other hand, we charge less for removal if a dead tree falls in your yard and doesn’t cause any structural damage.

Recent Requests We Received From Customers In Ashburn, VA

We have some broken and damaged limbs from the storm that need to be removed. One is very near our neighbors fence. Help soon would be appreciated.

I have a tree stump that I need to have ground down to meet the Ashburn HOA requirements. I can send a photo if easier than coming out for quote. Thank you!

fallen 25 foot tree in front yard to be cut to stump and removed. no stump removal necessary.