Trees And Offsetting Your Carbon Footprint (Everything You Need To Know)

Are you wondering how deforestation is affecting the health of the planet’s trees? 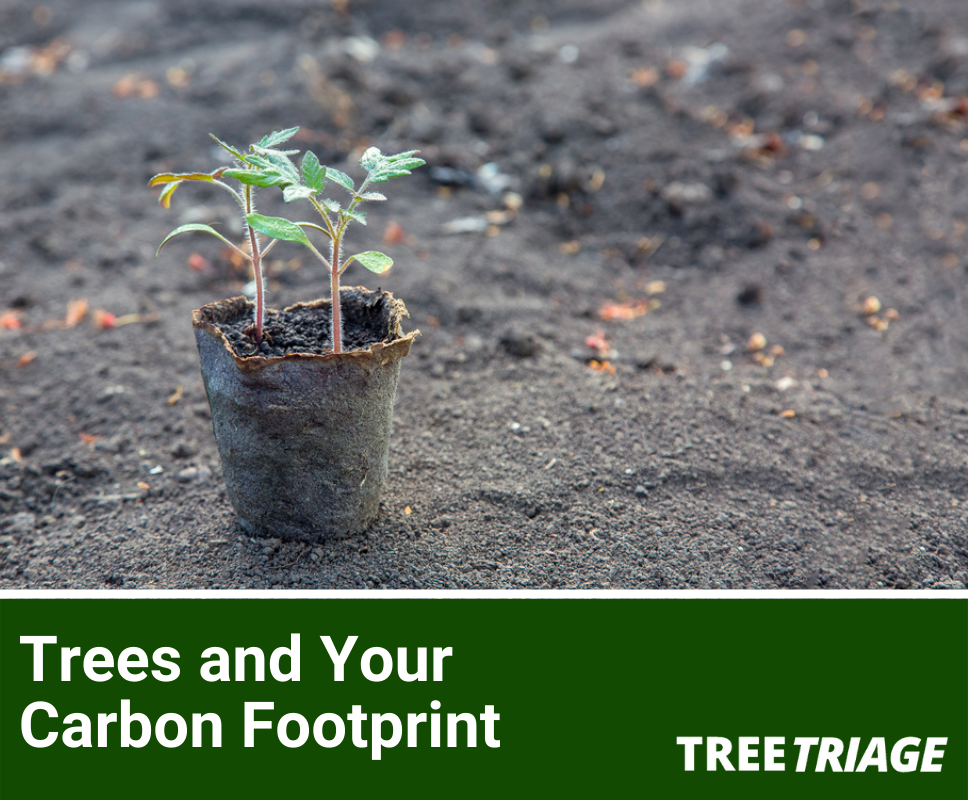 So, if you want to understand more about how your carbon footprint is impacting the planet and how trees can lower it, keep reading!

The fact that fossil fuels that produce greenhouse gases like carbon dioxide cause climate change is now well accepted.

Every human being consumes products and services that release carbon dioxide into the atmosphere. Our contribution to the aggregate greenhouse gasses in the atmosphere is known as our carbon footprint.

Many entities, companies, and individuals acknowledge the environmental damage caused by the carbon dioxide released into the air around us by the services and products we use. Consequently, they are interested in offsetting the carbon footprint by taking actions that remove greenhouse gases from the air around us.

One simple approach to offsetting the carbon footprint is to plant trees, which consume carbon dioxide through photosynthesis.

In this article, we define the phrase carbon footprint and how it is calculated. We then focus on carbon offsetting, how trees help in this process, and some of the challenges with relying on it. The article finally provides some tips on how to reduce your carbon footprint.

What Is a Carbon Footprint?

The organization that advises governments on sound policies, Conservation International, provides a simple definition of a carbon footprint: “Carbon emissions from your lifestyle choices, from transportation to diet, [that] impact the climate.”

To understand your carbon footprint, you just need to look around you. The manufacturing of the device you are using to read this article consumed energy. The device eats up more energy as you use it. It’s possible that this energy comes from burning fossil fuels. For the device to get to you, it had to be transported, and you probably used energy from fossil fuels when you went to buy it. Even if you bought it online, someone had to deliver it to you.

As you can see from the example above, we all contribute to the accumulation of greenhouse gases in the air around us. The fortunate thing is that we can take action to reduce our contribution. Carbon offsetting is one of these ways.

But what is the problem with greenhouse gases? They cause climate change, which according to the United States Environmental Protection Agency (EPA), “causes warming and is affecting various aspects of climate, including surface air and ocean temperatures, precipitation, and sea levels.”

EPA adds that the climate change caused by greenhouse gases like carbon dioxide is “disrupting people’s lives and damaging some sectors of the U.S. economy.”

The fact that we use the term “carbon footprint” indicates that the emphasis is on carbon dioxide. But why are we only worried about carbon dioxide when we also release other greenhouse gases, like methane and nitrous oxide?

The Union of Concerned Scientists has the answer: “Other gases have more potent heat-trapping ability molecule per molecule than CO2 (e.g., methane), but are simply far less abundant in the atmosphere.”

The Union of Concerned Scientists adds that the concern about carbon dioxide is also related to the fact that it remains in the atmosphere for longer. For example, methane will leave the atmosphere in about ten years, and it will take 100 years for nitrous oxide to go away.

On the other hand, an article published by the journal Carbon Management reports that “After the instantaneous pulse, 40% of the (carbon) emissions still remain in the atmosphere in 100 years, 20% after 1000 years and 10% after 10,000 years.”

It’s possible to calculate your carbon footprint. This could give you an idea of what you need to do to offset that footprint.

The Nature Conservancy provides an online calculator where you can enter your information and quickly estimate your carbon footprint. You can also find calculators from several other sites like Co2.myclimate.org, Climatecare.org, Epa.gov, and BP.com.

However, if you are not in the mood to do the math, The Nature Conservancy has done the calculations for you. The answer: “The average carbon footprint for a person in the United States is 16 tons [per year], one of the highest rates in the world.”

To get an idea of what they mean when they say that the American contribution is one of the highest in the world, you may want to know that the global average is around 4 tons.

Let’s put some context into the 16 tons of carbon dioxide each American delivers into the atmosphere per year. Energuide.be, a Brussels-based newspaper about energy, estimates that a passenger flying on a return flight from New York to Paris (11,668 km) produces one ton of carbon emissions. To get an idea of each American’s contribution, imagine every American making 16 trips to Paris and back every year.

We all play a part in carbon emissions. Therefore, we should all be part of the solution through carbon offsetting.

The online encyclopedia Britannica defines carbon offsetting as “any activity that compensates for the emission of carbon dioxide (CO2) or other greenhouse gases (measured in carbon dioxide equivalents [CO2e]) by providing for an emission reduction elsewhere.”

Green Mountain Energy, a provider of clean energy solutions, defines carbon offsetting as “investments in projects like reforestation efforts, methane capture at landfills and wastewater treatment facilities, and energy efficiency technology.” The same organization adds that these investments “act to help reduce both greenhouse gases and the carbon impact of human activity.”

The Challenge with Carbon Offsetting

Even though it is generally accepted that carbon offsetting is an effective way of reducing the harmful effect of greenhouse gases, not everyone is convinced.

Writing for Greenpeace.org.uk, Alia Al Ghussain starts with a statement that clarifies where she stands: “The biggest problem with carbon offsetting is that it doesn’t really work.” She argues that while trees can assist with capturing carbon, they should never be perceived as a replacement for slashing carbon emissions.

For Ghussain, the solution is clear: “the truth is that the need to cut carbon emissions means they [companies that want to truly reduce carbon dioxide in the atmosphere] will have to change the way they operate – and there’s no way around that.”

In his article published by TheGuardian.com, John Vidal shows how complicated the idea of carbon offsetting is. He writes, “There is no agreement on how much carbon dioxide a journey may emit, confusion about what actions best reduce emissions, a huge choice of where to direct your money, and growing cynicism as airlines, airports, and giant carbon-greedy corporations use offsetting to sell more flights or get permission to grow even further.”

Vidal concludes that “Offsetting can work, and it allows people who have to travel to do so with a clearer conscience.” He adds, “But the best strategy must be to reduce your own emissions first.”

The Role of Trees in Carbon Offsetting

“Nature can provide at least 30 percent of the mitigation action needed to prevent the most harmful impacts of climate change,” says Conservation International. The same organization adds that “Currently, the world’s forests store more carbon than is in the entire atmosphere.”

The statements above show that trees play an important role in carbon offsetting. But how do they do this?

In an article published by the U.S. Department of Agriculture, Joanna Mounce Stancil demonstrates the power of one tree. She writes, “Through a process called photosynthesis, leaves pull in carbon dioxide and water and use the energy of the sun to convert this into chemical compounds such as sugars that feed the tree.”

Stancil adds, “Trees also store carbon dioxide in their fibers, helping to clean the air and reduce the negative effects that this CO2 could have had on our environment.”

Do Some Trees Absorb Carbon Dioxide Better than Others?

Tips to Reduce Your Carbon Footprint?

As Ghussain notes, the trick with reversing the damage caused by carbon emissions lies in slashing the amount of CO2 in the atmosphere. To play your part, here are some tips you can follow:

While it would be impossible to avoid activities, goods, and services that add CO2 into the atmosphere, we can’t give up on reducing and reversing the damage that has already been done. Small actions like growing and looking after a tree, switching off the lights whenever you leave a room, sharing a car with co-workers or family members, working from home, or buying less can make a difference.