Looking for data on weather-related deaths in America? Great! You’re in the right place! For this campaign, the Tree Triage Team analyzed weather-related fatality and injury statistics from Weather.gov to: 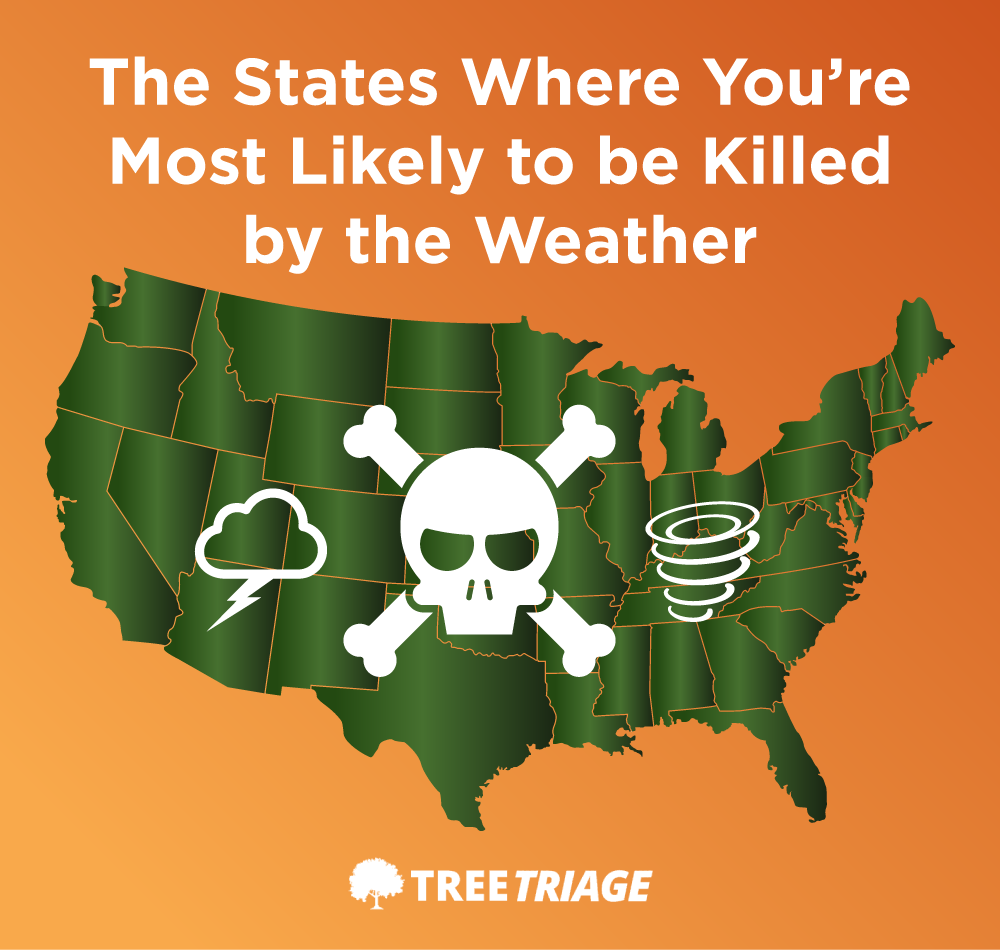 Our team of tree care experts is no stranger to dealing with the after-effects of extreme weather events in North America, especially in recent years. While maintaining safety on our customers’ properties is our main priority, our research team at Tree Triage just couldn’t help but be morbidly curious about where in the United States nature is the MOST extreme.

To find out, we analyzed 2020 data from Weather.gov to determine the states that saw the most fatalities, injuries, and total monetary damages due to various extreme weather incidents. We also determined the deadliest weather event in most US states by the number of fatalities due to cold, flooding, heat, tornados, and more.

Our first goal in this research study was to collect and analyze data from Weather.gov to determine which state has the most reported deaths as a result of extreme weather. Next, we scraped additional information to confirm how many reported weather-related injuries there were in each state. Combining these two data sets helped us find out which states are the most dangerous to human life in terms of extreme weather.

We also scraped data pertaining to reported property damages in dollars, including damage to homes, businesses, cars, and other personal property. This allowed us to compare states based on the overall extent of damage done by extreme weather events.

Finally, we wanted to isolate incidences by state and determine which deadly weather event was most likely in each state. We took all of the available data, filtered by state, and then sorted by the number of each reported weather event in each state.

The States With the Most Weather-Related Fatalities

We began our data analysis by scraping data pertaining to the number of deaths reported in each state that were directly related to extreme weather.

California came in at the number one spot with a staggering 46 deaths in 2020 alone, more than five times the national average number of fatalities due to weather. Arizona was in a close second at 45 deaths the same year. These were the only two states with more than 40 weather-related fatalities total in 2020.

Only three other states suffered from more than 20 deaths related to extreme weather: Tennessee with 30, North Carolina with 29, and Texas with 23.

On the opposite end of the spectrum, an impressive 11 states had zero reported weather-related deaths in 2020:

After these 11 states with no deaths, an additional 23 states had fewer than the average annual weather-related fatalities.

The States With the Most Weather-Related Injuries

Next, we looked at the total number of reported weather-related injuries in each state.

Interestingly, California and Arizona — which suffered the most weather-related deaths — didn’t come in at number one. Instead, Tennessee was the most likely state in the country for a weather-related injury to occur. A staggering 345 injuries were reported in 2020 alone.

California was in a distant second place with 253 injuries, followed by Mississippi, South Carolina, and Iowa with 125, 104, and 100 injuries, respectively. These five states were the only ones to have reported over 100 injuries related to extreme weather events.

The average number of weather-related injuries per state in 2020 was 27.88, and only nine states in total reported more than this:

Seven states tied for the safest in the country as far as weather-related injuries go, all with zero reported throughout 2020:

Of the states that did report injuries, 35 of them reported fewer than the national average.

The States With the Most Expensive Weather-Related Damages

Next, we looked at weather-related damages throughout the country to personal and public property. We arranged our data based on the estimated dollars’ worth of damage done.

In an unfortunate first place was Louisiana, with an incredible $14.6 billion in weather-related damages. This staggeringly high number is, in part, due to the three large-scale hurricanes that tore through the area in 2020 alone: Laura as a category 4, Delta as a category 2, and Zeta as a category 3.

In a very distant second place was Oregon with $3.6 billion, followed by Texas with $2.9 billion, Tennessee with $1.6 billion, and Washington with $1.3 billion in weather-related damages. Of all states across the country, these five were the only ones to sustain more than $1 billion in damages from extreme weather. All other states came in under $500 million.

Incredibly, Delaware, evidently protected from northern-moving tropical storms and hurricanes by Maryland, reported $0 in weather-related damages in 2020 as the only state with no reported damage.

The average reported damages across the country were just over $535 million, and an incredible 46 states fell under this number. This should put into perspective just how devastating extreme weather was in 2020 in the most-affected states.

The Most Deadly Weather Event by State

Finally, we analyzed all of our data to confirm what the most deadly weather event was in each state in 2020.

Heat was the deadliest weather event in California and Arizona, the two states with the most weather-related fatalities. That makes heat the overall most fatal weather event in the country. Heat is also responsible for the most deaths in Oklahoma and Nevada.

While heat killed the most people in 2020, the extreme weather event that was most serious in the highest number of states was flood. Floods caused more deaths than any other catastrophe in Colorado, Utah, Puerto Rico, Pennsylvania, Missouri, Ohio, Indiana, Kentucky, and North Carolina.

Two extreme weather events tied for the most deaths in the fewest states: lightning in Florida and winter storms in Montana. All other weather events were most deadly in at least two states.

Maintaining Safety On Your Property

Avoiding personal injury, fatality, and destruction of personal property at your home is probably number one on your list of priorities, especially when weather reports say that extreme weather is coming to your area. Unfortunately, there is only so much you can do to prepare for severe weather events.

In areas where wind storms, hurricanes, tropical storms, cyclones, tornadoes, and winter storms are a risk, one of the best things you can do to protect yourself, your family, and your home is to trim your trees regularly.

Removing dead and dying branches and making way for new, healthy growth in the tree canopies above your property is an excellent way to remove some of the risks of extreme weather. New, healthy limbs will be far less likely to fall during high winds, and healthy trees will be less likely to topple and lead to severe problems.

Having your trees trimmed by professional arborists like ours will also help keep your trees safe from tree pests and tree diseases, further helping to maintain healthy trees that are less likely to fall or drop limbs during extreme weather. Contact our certified arborists today to schedule a trimming if you’re concerned.

Wrapping Up: Major Insights and Conclusions

There’s no doubt that extreme weather can be catastrophic, both in terms of how it affects humans as well as personal property. Extreme weather events directly led to 434 fatalities, 1,422 injuries, and an incredible $27.3 billion in property damage in 2020 alone.

Most states with high fatalities, injuries, and damages appear along the coasts of the country. This is very likely due to the fact that hurricanes, tropical storms, and flooding are far more prevalent there than in landlocked states. Flooding is also common in states with major rivers nearby — like Missouri — and states with excessive snowfall — like Colorado and Utah.

Surprisingly, heat is the number one most common deadly weather event across America and is the most deadly in nine states.