Looking for affordable tree removal service in Simpsonville, SC? Great! TreeTriage is at your service 24/7. 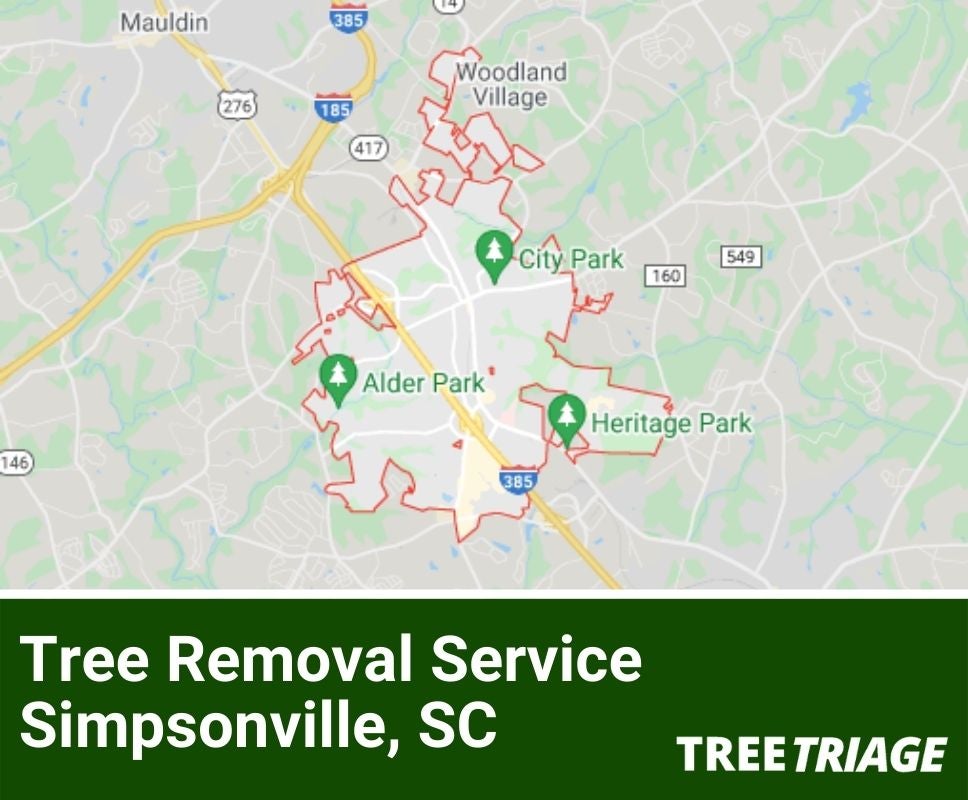 Tell us about your project in the form and we'll get you connected with specialists in or continue reading to learn what you should consider when removing a tree in Simpsonville.

What Are the Most Common Tree Issues in Simpsonville?

Simpsonville is located in the northern portion of South Carolina, about 15 miles outside of Greenville. The city lies in a portion of the state that is informally called “The Golden Strip.” This area earned the nickname in the mid-20th century due to the region’s potential for growth. And today, that potential has certainly been realized. From 2010 to 2019, Simpsonville’s population grew by a whopping 31.4%. Today, 24,221 people call the city home.

Trees are more than just a beautiful part of the landscape throughout Simpsonville and the rest of South Carolina. The foresting industry contributes over $21 billion annually to the state’s economy and is a major employer. With so many trees, issues are bound to come up.

The current biggest threat to Simpsonville’s trees is the Southern Pine Beetle. Unlike many tree pests, these beetles are indigenous to the area but become problematic when their population swells. Their numbers are usually kept under control by weather extremes. Most Southern Pine Beetles will not survive several consecutive days of temperatures above 100 degrees or below 0 degrees. In the absence of these types of temperatures, their population increases and creates an epidemic. Unfortunately, an epidemic cycle may last 3 to 4 years. The worst damage in modern history by these pests was in 1995 and 1996 when the beetles caused $125 million worth of damage to the state’s forests. Southern Pine Beetles tend to target older, stressed, and injured trees. Trees with a southern pine beetle infestation will have holes in the bark, sawdust at the trunk’s base, and visible pitch (a substance similar to sap) running out of the tree. These pests are managed via insecticides and by the removal of heavily infested trees.

Another pest that creates tree issues in Simpsonville and the rest of Greenville County is Emerald Ash Borers. These beetles are non-native pests from Asia and were first detected in Greenville County during the summer of 2017. Emerald ash borers are aggressive and destructive. These beetles have already killed tens of millions of the country’s ash trees since they were first detected in Michigan in 2002. Signs of an infestation include thinner foliage, sprouts growing at the base of the tree, splitting bark, visible tunnels created by larvae, and “D” shaped holes in the tree’s trunk. Trees with an Emerald Ash Borer infestation will also attract woodpeckers. Pesticides are an effective treatment for isolated trees but are cost-prohibitive for forests. Most trees with Emerald Ash Borers will have to be removed.

Does the City of Simpsonville Provide Any Assistance in Tree Removal Problems?

Residents who plan to remove a tree should be aware that the city may require a permit. Under certain circumstances, a tree removal permit is needed for “any tree with a diameter at breast height (DBH) of at least 12 inches or removing any tree that the Simpsonville Zoning Ordinance requires.” The exception to this requirement is tree removal at “a single-family residential property.”

Simpsonville also requires that homeowners remove any “nuisance” trees on their property. Section 18-37 of the city’s ordinance states that any “damaged or diseased limbs of trees or trees to the extent of potential injury to the public at large due to imminent structural failure” are “nuisances affecting public health.”

Who Is Responsible For Fallen Tree Removal in Simpsonville?

These guidelines simplify many tree issues in Simpsonville since 75% of homes here are owner-occupied. However, we have seen some intense tree disputes in our day! While we can’t account for every single issue that may come up, there are some rules of thumb for who is responsible for tree removal.

As noted above, homeowners are responsible for removing any fallen trees that grew in their yard. This is true even if the tree landed off of your property, such as in the street or on top of your neighbor’s flower garden. If you have a fallen tree, your first call should be to your homeowner’s insurance. Most policies have some coverage for tree removal.

If you’re renting a home in Simpsonville, you are not responsible for fallen tree removal. Even if routine lawn care is written into your lease agreement, fallen tree removal is generally considered above and beyond tasks like mowing and raking.

There would be one exception: if you did something to harm the tree or cause it to fall. Section 26-62 of the city’s ordinance states that “Any person who shall damage, deface or destroy any fencing, fences, trees, shrubbery or building on the land of another or belonging to any other person within limits of the city shall be deemed guilty of a misdemeanor.” If that applies to your situation, your landlord may hold you liable and expect you to pay for the tree removal.

Landlords own the property and are responsible for fallen tree removal. But if the renter acted negligently or intentionally caused the tree to fall, you may be able to hold them liable under the city ordinance mentioned above.

If you’re a property manager but do not own the property, the responsibility ultimately lies with the property owner.

If your neighbor’s tree falls on your property, they are still responsible for removing it. Hopefully, they’ll take care of it in a timely manner. If they don’t, contact the city for assistance.

How Does the Soil Affect Trees in Simpsonville?

There’s a reason the foresting industry thrives in this part of the country. The soil in Simpsonville is perfect for growing trees! In 1975, the United States Department of Agriculture (USDA) performed an intensive survey of the soil here in Simpsonville and the greater Greenville County. Our soil is described as having “a loamy surface layer” and drains well. Trees that are native to South Carolina will grow just fine in Simpsonville.

If you plan to plant varieties that are not native to this region, do your homework first. Some non-native trees will not thrive here or will require extra care. For example, many homeowners in the state enjoy growing peach trees in their yards. While peach orchards are prevalent throughout The South, the tree is not native to the U.S. There have been reported cases of Armillaria Root Rot in peach trees throughout South Carolina.

Hurricanes and tropical storms are a fact of life in coastal states like South Carolina. We get hit the hardest during peak storm season, which historically has been September and October. Simpsonville is further inland than much of the rest of the state, but trees can still sustain storm damage.

Another way that the weather affects tree health in Simpsonville is frost cracks. These cracks are caused due to the expand/contract cycle that the trunk experiences during temperature changes. Frost cracks are long and deep, and run vertically along the length of the trunk. Some tree trunks may need to be covered in paper tree wrap or burlap to prevent cracking.

What if Dead Trees Are Near Power Lines in Simpsonville?

Dead trees near power lines pose a serious safety risk. If a dead tree on your property is near a power line, the city expects you to remove it in short order. Removing or trimming a tree that is near a power line is not a DIY task! We have the experience and equipment to handle this task. In addition, we’ll work with the local power company to ensure that everyone stays safe during the tree removal.

If you have concerns about a tree not on your property, you should notify the power company. Most of Simpsonville and the surrounding areas are serviced by Duke Energy.

How Much Does Tree Removal Usually Cost in Simpsonville?

If you live in one of Simpsonville’s many dense subdivisions, it could be a tight squeeze for our equipment. We also have to take certain measures to protect any buildings, roadways, sidewalks, and pools beneath the tree we remove. If the tree is difficult to access, you can expect to pay more to remove it.

What you decide to do with the tree stumps

Stump removal or stump grinding is typically not included in the price of tree removal in Simpsonville, SC. After removing a tree, you have three options for what you want to do with the stump: leave it as-is, pull the stump out of the ground, or grind the stump down. Leaving the stump as-is does not cost you anything but may not be a practical choice. Grinding the stump is the cheapest removal option while pulling it out of the ground will cost you more.

The average cost of grinding a stump in Simpsonville is $110.00. You could pay a little more or a little less, depending on the circumference of the stump. Most stump grinding will be in the $80.00 to $141.00 range.

How healthy the tree is

A strong, healthy tree requires more work to cut down. Conversely, a dying or dead tree is much easier to remove. So while it can be painful to lose your Carolina Ash tree to a Borer infestation, at least the removal cost will be easier on your wallet.

Recent Requests We Received From Customers In Simpsonville, SC

I would like to have 5 trees and their stumps removed.

Remove some small trees and trim some larger ones.

Prune trees around the house.