Looking for affordable tree removal service in Bluffton, SC? Great! TreeTriage is at your service 24/7. 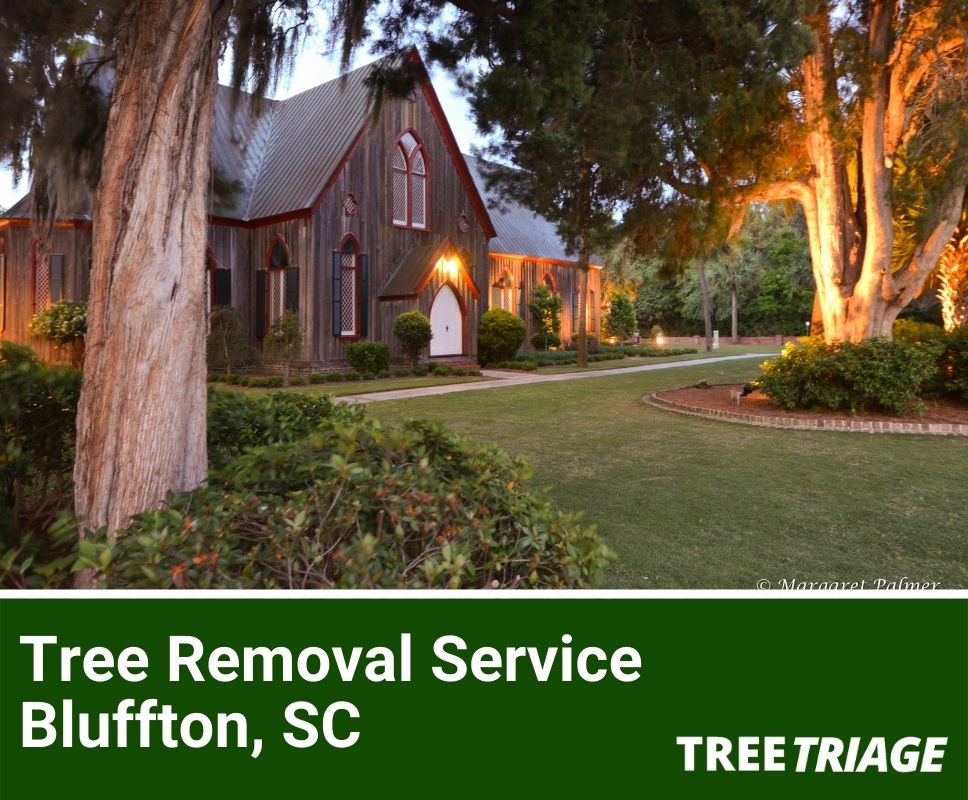 Tell us about your project in the form and we'll get you connected with specialists in or continue reading to learn what you should consider when removing a tree in Bluffton.

What Are the Most Common Tree Issues in Bluffton?

There are numerous tree species found in Bluffton, such as oaks, pines, palmettos, and cedar, to mention a few. Each of the trees has unique challenges, but there are common issues common to all trees in Bluffton, including:

Numerous natural disasters strike Bluffton, such as hurricanes, wildfires, and tornadoes. When these forces of nature strike, they move, break, crack and uproot trees regardless of the tree size. If you are caught up in such disasters, be wary of loose trees and follow all readiness guidelines provided by the government.

When Ben Franklin introduced the Chinese Tallow tree for ornamental purposes and oil production in the late 18th century, little did he know it would make the US’s ten worst alien plant invaders list. The tree is compatible with multiple soil varieties and grows and thrives quickly, producing fruits that birds eat, aiding in seed dispersal all over Bluffton. While the Chinese Tallow tree is non-aggressive, its fast-growing nature monopolizes an area resulting in low biodiverse flora. Also, the tree’s decomposing organic matter produces a chemical that curtails the growth of other plants within its vicinity.

Tree species in Bluffton grow tall enough to touch power lines, resulting in fires and power outages. In such occurrences, the power utility company is mandated to remove such trees. For instance, the recent removal of palmettoes due to their height. Although they possessed a historical significance to the city, the palmettoes were touching power lines causing power outages hence their removal.

The city of Bluffton encourages you to remove all invasive tree species and replace them with native trees such as oaks and pines. Also, if you spot an invasive, infested, or diseased tree, call the NISC for containment and eradication measures. Otherwise, contact our tree removal experts at TreeTriage for proper tree removal services.

Does the City of Bluffton Provide Any Assistance in Tree Removal Problems?

There exists Bluffton’s City of Ordinances – Chapter 12, Sec. IV – to guide citizens on issues on tree care, including tree removal. The chapter goes on to explain the circumstances under which the city can provide tree removal assistance in public property, but on particular conditions in private property, including:

If you want to remove a tree anywhere in Bluffton, go through the Code of Ordinances and be conversant with all rules and regulations about tree care to avoid any legal scuffles with the city.

Who Is Responsible for Fallen Tree Removal in Bluffton?

While trees add to the aesthetics of any property in Bluffton, certain circumstances can arise, resulting in the trees’ removal. But, do you know if you have any responsibilities to remove the tree? Let’s take a look at some scenarios:

If you are a renter in Bluffton, it means you are staying on someone else’s property. In this case, not unless you had a direct role to play in the fallen tree and the landlord can prove beyond any shadow of a doubt, then you’ll be responsible for removing the tree and recover any damages caused. Otherwise, the homeowner will remove the tree and recover the damages.

According to the law, a landlord in Bluffton leases or rents property they own to a renter. Therefore, it’s your responsibility to remove any fallen tree on your property if you are a landlord.

Disputes involving trees are common and drag on for a long time.

If a tree fell on your property and caused damages resulting from a natural disaster like a hurricane, you are responsible for removing the tree and damages.

However, if you spot a homeowner’s unhealthy tree, make a complaint about it, and fail to act, they’ll be responsible for removing the tree and the damages caused.

Tree removal can be especially without homeowners’ insurance, but that shouldn’t stop you from removing a fallen tree from your property. If you have a tree that needs removal, contact our tree removal experts to get the job done.

How Does the Soil Affect Trees in Bluffton?

The proximity of Bluffton to the Atlantic Ocean means most of the soils are sandy soils. These sandy soils formed thousands of years ago after glaciers and water deposited sandy marine sediments in the Bluffton area. Over time, precipitation, temperature acted on the parent material – the sediments – to form the sandy, acidic soils in Bluffton.

Sandy soils favor particular species of trees that prefer a pH of 7 and below, such as pines and oaks. Have a soil sample tested and analyzed to gain insight into the best tree to plant on your property.

The trees in Bluffton are adapted to the acidic soils. However, water leaches most of the nutrients deeper into the ground leaving poor soils due to the high drainage soil properties. These poor soils can result in weak or stressed trees.

If you have any trees with such issues, consider removing them. Contact our specilists at TreeTriage for professional tree removal services.

According to data from the SC Department of Natural Resources, 41 hurricanes and storm systems have hit the southern part of the state, impacting Bluffton. The sandy soils of Bluffton aren’t compacted and therefore not strong enough to firmly hold a tree in place. These trees are no match for ensuring high hurricane winds. The trees are easily uprooted, broken, and blown away, leaving unhealthy and weak trees.

The intense heat caused by the 80°F high summer temperatures in Bluffton causes the trees to shut down vital processes such as transpiration, and the production of carbon dioxide and carbohydrates necessary for growth. This shut down results in weak trees and increases the chances of pest and disease infestation.

What If Dead Trees Are Near Power Lines in Bluffton?

A fallen, dead, or overgrown tree near power lines pose a fire hazard and can cause power outages leaving numerous homesteads and businesses in Bluffton in the dark. There are various logistics at play while removing a tree near power lines, but it has to be done by trained and insured professionals.

So if you have a fallen, dead, or overgrown tree near power lines at your Bluffton home, don’t touch, go near, or attempt to remove it yourself. The various power utility companies will remove the dead trees just like NESC mandates.

How Much Does Tree Removal Usually Cost in Bluffton?

Tree removal in Bluffton doesn’t come cheap but necessary, especially if the tree in question is invasive, diseased, or infested. While there are some estimates on the cost of various tree removal services, certain factors will determine the final figure. They include:

Nature and Scope of the Job

The average cost of removing a tree in Bluffton is $700. But this figure goes much higher due to the risks involved if the tree is near power, gas, or water lines. Additionally, if a tree is in a public space, such as a school, the risks of removing the tree include personal injury and damage to property. While cordoning of the area can help minimize these risks, tree removers exercise great caution and are sometimes require different machines to get the job done, resulting in higher charges.

Talk of different machines; if the tree is too tall for traditional removal, our tree removers use extra machines such as cranes or bucket lifts, which will increase the final cost. For instance, an 80-foot tree may cost you $900, but due to its height, if our specialists will require a crane that’ll cost you an added $500.

These prices are estimates. For a more accurate figure, contact Tree Triage if you want to remove any type or size of the tree. However, ensure you follow all guidelines stipulated by the Bluffton Code of Ordinances.

Recent Requests We Received From Customers In Bluffton, SC

4 trees removed red oak, bluff oak and 2 water oaks all medium size. Prune 3 additional water oaks fairly high and finally grind roots growing out of the ground on both sides of the house.

Really need someone to come out to the house. Need tree pruned back. have 40 foot leyland cypress that's needs to be removed. maybe a few other items.. All in the back yard.

We had three trees hit by lightening over the summer and they seem to be all dead. Loosing bark by the minute. Consider having them removed.

Several tree roots are above the ground and our yard guy fears they will break his mower blades.

Need a quote to install approximately 30 5 caliper trees in our neighborhood.