Looking for affordable tree removal service in New Castle, PA? Great! TreeTriage is at your service 24/7. 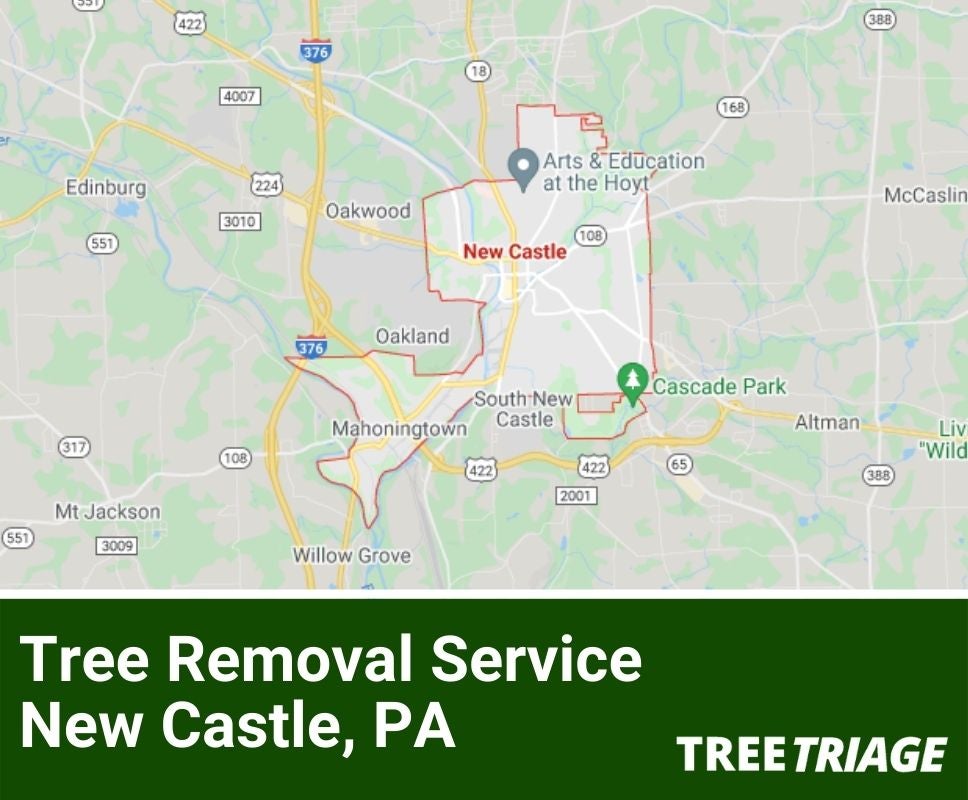 Tell us about your project in the form and we'll get you connected with specialists in or continue reading to learn what you should consider when removing a tree in New Castle.

What Are the Most Common Tree Issues in New Castle?

New Castle’s trees face a few common issues that require attention. In addition to the more mundane problems like disease from improper pruning, termites, and the like, there are also pests like the European gypsy moth (Lymantria dispar dispar) that require significant attention. These moths lay their eggs on trees, the larvae hatching and feeding on the soft parts of leaves. Without their leaves, the trees aren’t able to photosynthesize, eventually killing them through starvation, disease, or their vulnerability to other pests.

The emerald ash borer (Agrilus planipennis) is another problematic pest that’s sometimes found in the area. Mainly targeting ash trees, these beetles burrow in and eat the soft wood below the bark of trees, seriously damaging them and hampering their resistance to disease. Both of these insects are an infrequent but significant threat to trees in the New Castle area. Be aware of the signs of an infestation and report sightings to the local government as soon as possible.

Several species of trees that grow in New Castle are susceptible to cankers, as well. Frequently caused by disease, trees with cankers often need to be destroyed before any infection spreads to others in the area. While certain plant medicines can help in treating cankers, inexperienced gardeners are really playing with fire if they attempt this on their own. It’s much safer to let professionals like Tree Triage handle something like this than risk causing an outbreak with every tree in the neighborhood.

Does the City of New Castle Provide Any Assistance in Tree Removal Problems?

The city of New Castle does not currently provide residents with assistance in general tree removal. While the city does have a Christmas tree removal program, this is obviously exclusive to post-Christmas and these specific trees. Other than that, tree removal will be up to you to handle.

Who Is Responsible For Fallen Tree Removal in New Castle?

If a tree falls in your yard, does it obligate you to have it removed? Well, it depends. There are a few ways a fallen tree case can be resolved and much of it depends on ownership. Let’s take a look at some of the most common ownership issues surrounding a fallen tree so that you can determine if you’re the one who needs to have it taken away.

Homeowners typically own their homes as well as the land they live on. In this case, they also own the trees growing from their lawns, so they’re the ones who are responsible when that tree falls over. Outside a situation where someone else knocks over or destroys the tree, you’re going to have to pay for any removal services you want or need to be done by our team.

That said, there may be a common but unexpected way to offset the cost. Depending on how your homeowner’s insurance policy is written, your fallen tree removal might be covered. The usual stipulation is that your actions can’t have anything to do with the tree falling, but you’ll have to check your policy to know for sure. Either way, insurance could potentially eliminate the out-of-pocket tree removal cost entirely.

As a renter, you don’t own the home or land you’re paying money to live on. Because of this, none of the trees on the grounds actually belong to you, meaning they aren’t your responsibility to have them removed if they fall. As the actual owners of the trees, a landlord will need to pay for the tree removal. Beyond a situation where your actions have caused the tree to fall, you shouldn’t have any hand in getting the tree taken away other than telling the landlord it needs doing.

A landlord is the owner of the land and trees they rent. Therefore, they must also be the ones to remove any trees on the property, not the tenants. As outlined in Pennsylvania’s Landlord and Tenant Act of 1951, anyone renting property has to make sure that the property is in a safe and livable condition. Neglecting to remove fallen trees or to tend to trees, in general, would be a violation of this.

Similar to a homeowner, a landlord’s insurance policy might cover the tree removal costs. Like in other examples, someone else who knocks over a tree on the rented property might be held liable for the removal and other damages, too.

Trees falling onto neighbors’ lawns is such a common occurrence that virtually all states have some version of the law for it. Pennsylvania is no exception to this, the laws surrounding trees and ownership stating that whoever’s lawn the tree’s trunk grows on is the owner. This means that the owner will have to pay for removal. Unless something uncommon happened like the tree’s trunk growing beyond the property line, this should take care of most potential issues. If you do find yourself in a joint ownership situation, though, you’d need to discuss splitting the payment with your neighbor.

How Does the Soil Affect Trees in New Castle?

According to the Lawrence County soil survey data, New Castle’s ground is largely made of silt and loam with some larger rocks and gravel mixed throughout. This provides trees with plenty of nutrients and gardeners with an easy time digging up the ground. Though you might have to move past some of the rockier bits in places, trees should be able to grow fairly easily in New Castle and establish deep root systems.

With this in mind, New Castle can support a wide variety of trees. The American fringe, river birch, and American dogwood are all gorgeous examples of native trees. The red maple is another popular species, as is the red oak.

The weather in New Castle is mostly mild throughout the year with fairly hot summers and cold winters. While humidity and heat aren’t too bad in the middle of the year, winters can get below freezing on a regular basis and last a bit longer than you might expect. New Castle is actually one of the colder places in Pennsylvania, receiving about 35 inches of snow each year, slightly below the 41 inches of rain annually.

All of this taken together means that trees in the community need to be adapted to these winter freezes. Between this cold and the summers that rarely reach about 90 degrees on average, hedge your bets towards more cold-tempered plants if you’re thinking of planting trees. Additionally, watering is unlikely to be of much need unless you’re dealing with very young trees, thanks mostly to all the precipitation mentioned earlier.

What If Dead Trees Are Near Power Lines in New Castle?

In general, New Castle does not allow trees to grow tall enough to pose a danger to power lines. If a tree were to die under or dangerously near a power line, city officials would come to remove it. If a tree is in a dangerous place and hasn’t been dealt with quickly, you can contact the local government and ask them to take a look at it.

How Much Does Tree Removal Usually Cost in New Castle?

Tree removal in New Castle costs an average of $700, with most jobs falling between $175 and $2,090. Stump removal will typically add an extra $250 or so to your bill. These prices aren’t immutable, though. Several factors can change how much your tree removal bill ends up, a few of them being:

When it comes to tree removal, size is one of the biggest variables for the final bill. Depending on how tall a tree is, we might need more people, more equipment, and more time overall to get the job done safely and properly. If nothing else, that time factor would mean a bigger bill on its own given the per-hour rate for services.

Being able to access a tree we need to remove is a major part of a quick and easy job. In other words, if we can’t get to your tree without a (possibly literal) uphill battle, it’s going to take us a lot longer to do the job, and that’s going to cost you a lot more. While certain things like the tree’s location can’t be changed, you can definitely help us out by keeping the removal area clear of debris. The faster and easier we can access your tree, the sooner we’ll be out of your hair.

Like in most industries, an emergency tree removal costs more than a scheduled job. Mobilizing our crews on short notice, possibly on the weekends, holidays, or after hours, is a major hassle even if it is understandable. Like a fast pass at an amusement park, though, skipping the line will cost a little extra. If possible, it’s best to wait and schedule a removal even if a tree has already fallen. Better yet, be aware of the signs of a damaged or diseased tree and take measures to save it before needing removal, or at least schedule a preemptive removal ahead of time.

Recent Requests We Received From Customers In New Castle, PA

Trees and vines cut from backyard. Clean up and possibly dirt brought in. Residential lot.

Removal of tree branches that have already been cut down from 3 trees.

Trimming and cutting down a tree.

Oak tree needs to be removed.