Looking for affordable tree removal service in Glen Mills, PA? Great! TreeTriage is at your service 24/7. 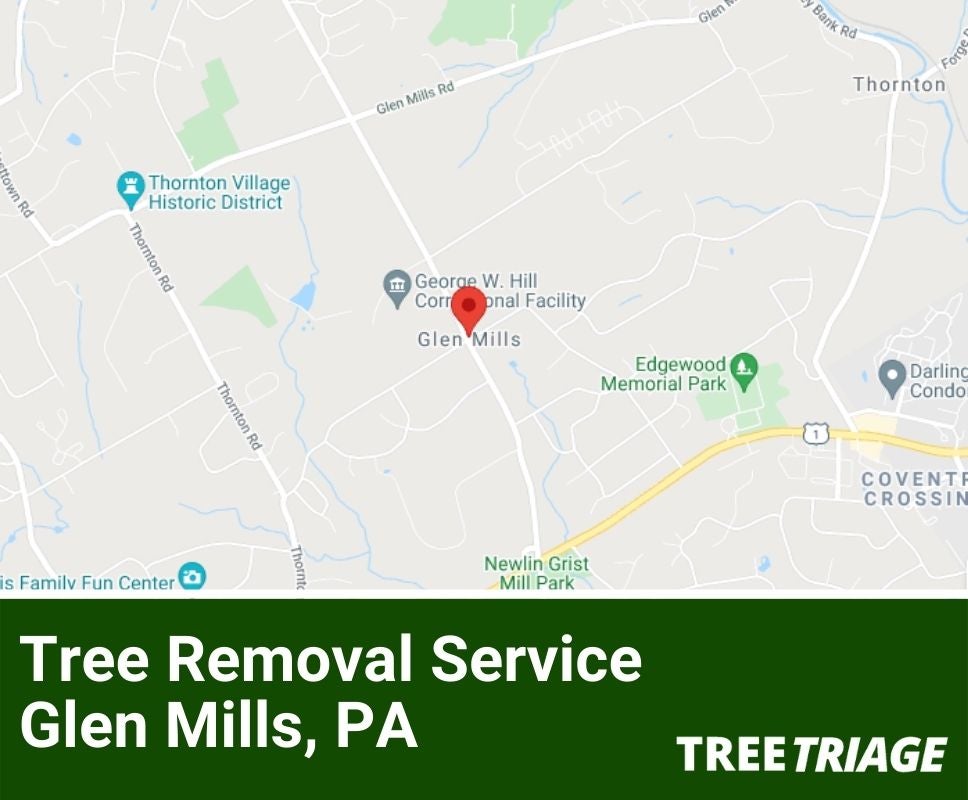 Tell us about your project in the form and we'll get you connected with specialists in or continue reading to learn what you should consider when removing a tree in Glen Mills.

What Are the Most Common Tree Issues in Glen Mills?

The trees in Glen Mills face a variety of issues. Typical problems include things like improper care, termite infestations, and car crashes. Beyond that, though, fungi and disease are likely to be what’s most dangerous for your trees. Over the years, Pennsylvanians have had to suffer from a variety of major tree diseases. Sudden Oak Death (SOD) is one of these diseases, the fungus has spread through the state several years back. While Glen Mills has thankfully been largely passed over so far, the potential is always there if problems aren’t reported and proper care isn’t given to the community’s trees.

One of the most dangerous pests that might affect Glen Mills trees is the European gypsy moth (Lymantria dispar dispar). The larvae of these moths eat the leaves from hardwood trees across the world, devouring them at such a rate as to kill off whole patches of forest. Pennsylvania is known to be a suitable habitat for these bugs, so it’s extremely important to send a report to local government officials if you spot one of these moths or their caterpillars, as inaction could easily lead to an infestation and potentially their spread to unaffected areas of the country.

Less dangerous though still threatening is the spotted lanternfly (Lycorma delicatula). They feed on the sap produced by various plants, piercing into them to suck it through the outer bark or stem. While one lanternfly is unlikely to do much damage, multiple lanternflies feeding on the same plant can easily kill it. Concord Township put out an informational guide on the invasive species, urging residents to use caution when moving in and out of areas where these bugs have been known to live to prevent them from spreading elsewhere.

Does the City of Glen Mills Provide Any Assistance in Tree Removal Problems?

Glen Mills’ local government does not assist residents in tree removal. While they are in charge of maintaining or removing trees on public property, homeowners and the like must take care of tree removal on their own.

Who Is Responsible for Fallen Tree Removal in Glen Mills?

Knowing who’s responsible for removing a fallen tree can be a bit tricky in certain situations. Let’s review a few common scenarios related to fallen trees and breakdown who would need to have the tree removed from the property.

If you own your home, this usually means you own the land underneath it. If that’s the case, you’d also own any trees growing in your yard. In the majority of cases, a tree’s owner is the one who’s responsible for having it removed once it falls or dies. Unless you can prove that someone else has caused harm to your tree that necessitated that removal, the time and costs associated with it are all on you.

Don’t get too down, though. Before you call us up, check your insurance policy. Many homeowners will find that tree removal is covered in some form, particularly if a tree fell due to an “act of God” or similar situation where they weren’t at fault. With insurance, you can significantly reduce or fully eliminate your removal costs.

By definition, a renter is only renting their dwelling and has no claim of ownership to it or the land it’s on. Unless some special arrangement has been worked out with your landlord, you don’t own any of the trees growing on your rented property. This means that you aren’t responsible for them if they were to fall over and need removal. In many cases, your landlord would even be compelled by law to remove the tree.

The obvious exception to this would be if you were somehow responsible for the tree’s current state. If you crash your car into a tree or cut it down, that could land you in hot water. At the very least, you’d more than likely have to pay for the removal costs.

As with a homeowner, a landlord owns the property they rent out even if someone else is living there. By that logic, the landlord is responsible for maintaining or removing any trees on that property. Just like with other forms of maintenance, having a fallen tree removed is a duty a landlord must have done. Pennsylvania law stipulates that rented properties must be clean and free of hazards, so a rotting tree laying on the front lawn is definitely not in compliance with that.

Like we said before, the difference here is that a renter or another party might be on the hook for removal costs if it’s provable that someone else is responsible for the tree falling. If that isn’t the case, though, a landlord’s insurance would potentially cover removal costs in the same way a homeowner’s insurance might.

The age-old dilemma of what to do if a tree falls onto a neighbor’s lawn still rages to this day. In times like these, it’s important to remember the question of ownership, specifically in regard to the tree itself. A tree’s owner is defined as the person on whose lawn the tree’s trunk was located. Regardless of where the tree fell, it’s up to the owner to have it removed. Beyond that, it’s also just common courtesy to do at least that much if your tree wipes out the neighbor’s shed on its way down.

A potential complicating factor for this would be joint ownership of a single tree. Roots and overhanging branches do not count towards a tree’s owner, but if the trunk of a tree has grown past the property line, it would likely mean that you and a neighbor would both be considered the owners of the tree. In this case, removing the tree would be a joint responsibility. While you could potentially argue in court that the person who originally planted the tree or who owned the majority of a tree’s mass should take care of the removal, this would likely be a major waste of time and would damage your relationship with your neighbor. It’s best to just talk things out like adults and agree to split the costs in a way that’s fair for everyone.

How Does the Soil Affect Trees in Glen Mills?

Based on data collected for the Delaware County soil survey, Glen Mills’ soil is mostly loam and silt. It also has the advantage of being outside of major cities like Pittsburgh, meaning that the soil is largely uncontaminated by the various chemicals and runoff that you might find in the ground there. This makes Glen Mills one of the most fertile places in Pennsylvania overall. It also means that a variety of trees can grow well in the land around this area.

Glen Mills lies within the “humid subtropical” climate zone, meaning town residents can expect hot and humid summers but milder winters. Rain is the most common type of precipitation in the area and, while possible, snow is becoming more infrequent as the years go by. This means that any trees planted in Glen Mills should be properly adapted to the heat, as that’s what they’ll be exposed to for most of the year. Some cold resistance is also smart, but may not be necessary if current weather trends of diminishing snow keep up

What If Dead Trees Are Near Power Lines in Glen Mills?

Dead trees growing near power lines pose a major public safety hazard, as deadwood is much more likely to burn than living wood. As such, Glen Mills tree trimmers make an effort to remove dead trees wherever they can find them, especially if they’re currently posing risks like this. If you see a dead tree on public property that hasn’t been cut down, you can contact the local government with that information to have them remove it. If your property has a dead tree located underneath power lines, you’ll likely be asked to remove it if you haven’t already done so on your own. Tree Triage can help in that case!

How Much Does Tree Removal Usually Cost in Glen Mills?

Size is one of the most important factors in tree removal. In general, taller trees are going to cost more to remove. The per-hour prices quoted above are all based around trees under 30 feet tall, for example. Between the extra safety precautions, extra time, and extra manpower needed to do the job right, don’t be too surprised if you find yourself with a larger bill than expected.

Calling in an emergency job tends to run you more than a standard call. After all, you’re asking us to drop everything and come over, even on the weekends, holidays, or after normal working hours. While you can’t exactly control when a tree falls through your house, it’s not unreasonable to expect that you might have to pay some extra for the removal.

A tree that’s easier to access makes our job so much easier. It’s less of a hassle, less of a safety concern when it falls, and it makes things run more quickly. If you’re hoping to save on your final bill, make sure the area around the tree that needs removing is as free of clutter as possible with an easy path to get to and from it.

Recent Requests We Received From Customers In Glen Mills, PA

Could i get an estimate of the cost please. Closest part of any structure is about 30' away and it is just one corner of the garage. nothing else in the area.

maple tree removed and hauled. 18 inch to 20 inch thick and sets on the corner of my driveway and the road.

Weeping willow removed from back yard.

Remove 7 pine tress around the deck.

I need an estimate for tree removal.