Looking for affordable tree removal service in Bucks County, PA? Great! TreeTriage is at your service 24/7. 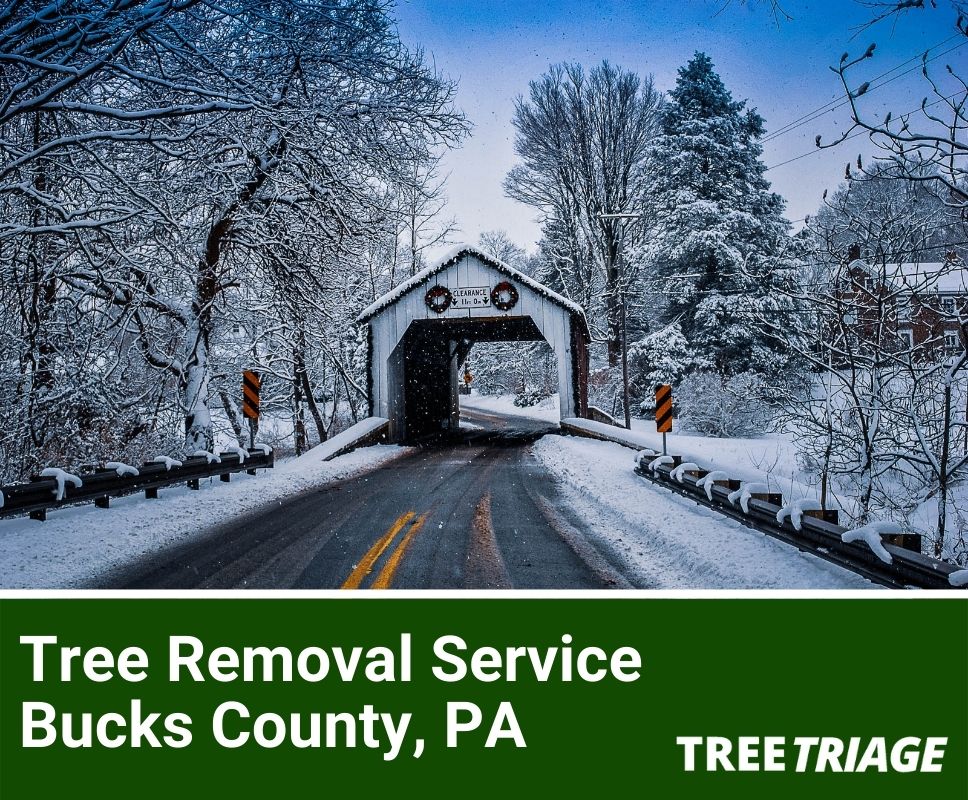 Tell us about your project in the form and we'll get you connected with specialists in or continue reading to learn what you should consider when removing a tree in Bucks County.

What Are the Most Common Tree Issues in Bucks County?

Bucks County has a temperate climate, which contributes to flourishing plant life. However, when extreme weather conditions such as storms and high winds rock the region, trees suffer immensely. Consequently, the weather-stressed trees are usually too weak to withstand pest and disease attacks.

Tree pests in Bucks County are both general and species-specific. For instance, the spotted lanternfly attacks both fruit and non-fruit trees, while the emerald ash borer mostly bores into ash tree trunks. Other pests in the area include bagworms, hemlock woolly adelgid, Japanese beetle, spider mites, scale insects, and Asian longhorned beetle.

Does Bucks County Provide Any Assistance in Tree Removal Problems?

Essentially, the borough is responsible for removing trees on public property. These include hazardous trees such as those dead, dying, or obstructing traffic. If diseased and pest-infested trees are beyond salvaging, they are also removed to curb the spread of diseases and pests.

The borough may also order the removal of such trees on private property by issuing a notice. If the owner fails to act upon it within the set timeline, the borough can enter their property, remove the offensive trees and charge the costs to the owner.

Where private owners want to remove trees on their property for whatever reason, they must first apply for a permit. However, for emergency removals such as property protection, you can remove the tree without a permit, then notify the borough within 10 days.

Who Is Responsible For Fallen Tree Removal in Bucks County?

Fallen trees, especially those along boundaries, are always a contentious issue. However, according to the basic land ownership laws, maintaining trees is the responsibility of the property owner where it stands. That means private landowners are responsible for removing trees on their property, while the Bucks County authorities maintain those on public property.

Sometimes trees grow on the boundary line such that the trunk sits on both sides of the boundary. In such a case, both property owners own the tree, thus have a duty to remove it when it falls. Nonetheless, there are situations where the tree owner is not responsible, especially if the tree causes damage.

Homeowners in Bucks County are responsible for removing their fallen trees. But if the tree destroys insured property, the removal costs are often covered by the homeowners’ insurance compensation.

However, the homeowner should always maintain their trees well, including removing the hazardous ones, such as those dead or dying. If the insurer discovers the fallen tree had been neglected, they can reject the compensation claim.

Essentially, renters are not responsible for removing dead trees on the property. In most cases, maintaining the trees, including their removal, rests on the landlord. However, property insurance only covers the landlord’s property. As such, renters should always consider taking renters insurance to protect their personal belongings from damages such as a falling tree.

In Bucks County, landlords are responsible for removing fallen trees on their rental property. The landlord should report the issue to the association where the houses are in a managed community that restricts tree removal. However, if the tree destroys insured property, the compensation often meets the removal costs.

Similarly, if the tree falls on your property, your neighbor is not responsible for the damages it may cause unless you can prove they had neglected the tree. Otherwise, you should file a compensation claim to your insurer. The payment should cater to the tree removal costs alongside the property damages.

How Does the Soil Affect Trees in Bucks County?

Soil is a crucial factor in the health of trees; besides offering them support, soils store nutrients, water, and essential minerals, which they use to produce their food. As such, trees require soils with a compactness level that provides maximum support and the right texture to allow nutrients and water to flow into the roots. Soils also filter pollutants, thereby preventing toxins from entering a plant.

Soil texture affects its properties and consequently the state of trees. For instance, sandy soils have large grains, which make them overly drained. On the other hand, clay soils have fine particles, hence are more compact than other soils. They also tend to bind nutrients, preventing them from being absorbed. Again, clay usually has a low pH, which is unconducive for most tree species. Many trees thrive at neutral pH levels, while some prefer alkaline soils. However, acidic soils can be treated by liming to increase their pH.

Generally, soil type varies depending on the location. Different trees also prefer distinct soils, with most of them performing well in well-drained soils. In Bucks County, the primary soil type is loam, which is well-drained in most cases. It exists in different variations such as silt loam, sandy loam, gravelly loam, etc. However, their drainage varies depending on the region. The water table in some places is relatively high, contributing to poor soil drainage.

Sandy soils are also found in some places. Usually, we recommend adding organic matter to sandy soils to increase their compactness and reduce water and nutrient loss.

Weather plays a vital role in tree health. Conducive weather such as moderate precipitation and temperatures are crucial to a tree’s growth. On the other hand, extreme weather conditions like flooding, high winds, drought, storms, etc., destroy its health.

Bucks County mainly has favorable weather, but like most parts of the nation, severe conditions hit the region once in a while. For instance, storms and high winds often leave devastating damage in their wake. They snap and uproot some trees, while those that survive often lose most of their leaves mid-season.

Leaves are an essential part of a tree as they help in food production. Typically, trees shed leaves, especially after the magnificent display of foliage beauty in fall. But that’s part of their cycle. By then, they usually have food preserves, which sustain them until new leaves grow and food production resumes.

In a nutshell, shedding leaves mid-season interrupts their normal cycle, resulting in starving, especially if a dry season follows shortly after. Prolonged dry weather also destroys the root systems due to dehydration. Consequently, trees with damaged roots are more susceptible to root rot, leading to a slow death if not detected early. Drought-stressed trees are also prone to pest infestation as they have weak defenses.

What if Dead Trees Are Near Power Lines in Bucks County?

Power utility companies have vegetation management policies that allow them to maintain vegetation along their power lines. This is because trees growing near power lines threaten lives and property, besides causing power outages.

The companies are keen on removing any dead trees near power lines as they pose a higher risk. A dead tree can topple any time, even without a trigger, such as a storm. For instance, First Energy collaborates with private landowners to remove such offending trees to avert potential tragedies.

PECO Energy also offers emergency removal services. But for non-emergency issues such as the occasional trimming of trees near the lines supplying power to your home or removing a tree for site development, you’re responsible for hiring a company like Tree Triage. You can request them to temporarily disconnect power to your home and reconnect when we’re done trimming.

How Much Does Tree Removal Usually Cost in Bucks County?

Tree removal cost in Bucks County depends on factors such as tree size, condition, and location. Generally, you can spend as low as $200 and as much as $1,900, depending on the mentioned factors. But the average spend for most removal jobs is about $550.

A tree’s size is usually the primary cost determinant. For example, a paperbark maple is likely to cost much lower than the taller silver maple. Likewise, a tree with a broad crown requires more time and effort to cut and clear, hence costs more than a tree with few small branches. Trees with thick or double trunks also cost higher than the slender species.

Note that the removal cost only covers cutting the tree and clearing. If you want the stump removed, you pay an extra $100-250 depending on the stump width and root depth. Usually, younger trees have shallower roots, as most tree roots grow deeper as they age.

Location is another unique factor that’s pivotal in determining the quote. We may charge you more if the tree is located near a structure and requires that we use special equipment such as a crane to remove. Trees near power lines also cost more due to the higher risk involved.

Similarly, if a tree is in a hard-to-access location such as near a river, cliff, slope, etc., it would cost you more, again because special equipment is required to remove it safely.

A tree’s condition is another vital cost factor. For instance, removing a healthy tree costs much lower than a dead or dying tree. This is because we may not require to use specialized equipment to remove the tree, especially if it’s in an open field that’s easily accessible. In this case, our crew can climb up the tree, cut and rope down pieces easily. This is unlikely with a hazardous tree due to the apparent dangers.

Finally, if you’re hiring us to remove a fallen tree, we would charge you based on where the tree has fallen. Removing a tree that has fallen in an open field is far cheaper than one that may have fallen on top of a building. In most cases, such a tree requires equipment, such as a bucket truck, to remove without damaging the property further.

Recent Requests We Received From Customers In Bucks County, PA

We have a few acres, the tree line is pretty close to the back of the house so we were hoping to remove enough trees to push the tree line back and have a bigger back yard. If possible, can we keep Communication to email (3 small kids). Thank you!

Tree is old next to the house need it removed. I am too old in my 80s and limited income. Can I get a quote?

I have a small tree that came down that I need removed.