Looking for affordable tree removal service in Aston, PA? Great! TreeTriage is at your service 24/7. 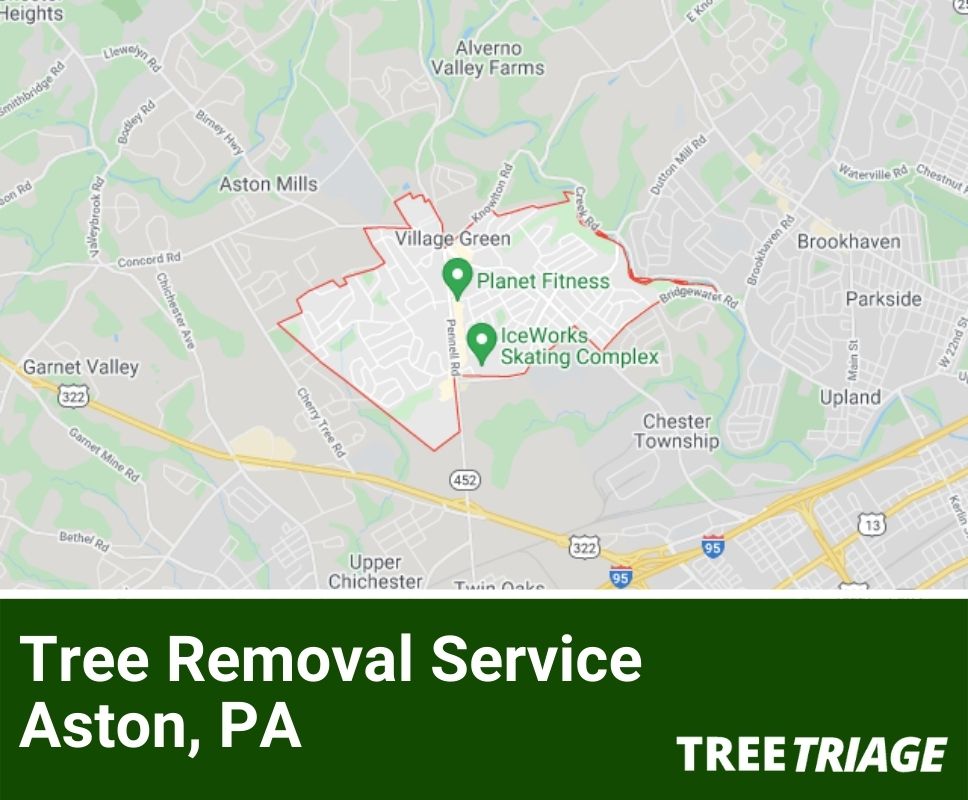 Tell us about your project in the form and we'll get you connected with specialists in or continue reading to learn what you should consider when removing a tree in Aston.

What Are the Most Common Tree Issues in Aston?

Aston’s trees are plagued by several issues, one of the most troublesome being the annual appearance of the spotted lanternfly (Lycorma delicatula). These bugs poke holes into trees and plants to suck the sap inside them, and the waste they release while doing so also encourages mold to grow over their victims. Delaware County has had many problems with these pests in the past, with numbers increasing every year. Summer is the worst season for them as many hatch at this time, meaning residents should stay on the lookout for their arrival and report them to pest control and local government.

Beyond that, the city’s trees also have more typical problems like tree diseases, improper care, car accidents, and termites. In addition to being more common, they’re also a lot easier to handle. Inclement weather may be an issue during certain seasons, particularly when it comes to snow and ice during the winter or heavy storms in the summers.

Does the City of Aston Provide Any Assistance in Tree Removal Problems?

Aston does not provide tree removal assistance to residents. While the city will collect both leaves and branches, they will not accept tree materials that are not leaves or branches under four inches in length, respectively. This means you can’t smuggle in a whole tree during one of these pickups and will have to take care of that on your own.

Who Is Responsible for Fallen Tree Removal in Aston?

When a tree falls, someone has to remove it, but who might that be? Figuring this out can be a bit tricky sometimes, but we’re here to help you parse the situation. Here’s who might be responsible for tree removal in a few different scenarios you might encounter in Aston.

Homeowners, by definition, own their homes. Typically, this also extends to owning the land a home sits upon. When you own land, you own everything growing out of it including any trees you might have on your lawn. If one of these trees falls, it would be your responsibility to have it removed as it is your property. The only major exception to this would be if someone else were to knock your tree over, in which case you could get them to pay if you can prove they’re at fault.

If you’re in a situation where you have to have a tree removed, though, don’t act too quickly. Before you give us a call, take a look at your homeowners insurance policy to see what it has to say about tree removal. While it will depend on what kind of coverage you have, many policies do cover tree removal caused by a variety of circumstances.

As a renter, you don’t normally own your house or the property it stands on. Since you’re just renting all of this, the person who owns the buildings, lawn, and plants on the property is the landlord. Going back to what we explained with the homeowner example, a landlord would then be responsible for removing trees from a rental property’s lawn because they still own those trees, even if they aren’t living on the land.

Similarly, the exception here would be if you, as the renter, decided to destroy a tree on the property. If you did that, you’d likely be responsible for the removal costs at minimum, excluding any damages you might have to pay. There’s also the possibility that a landlord includes tree removals as a duty of tenants in a lease, though this is pretty uncommon and something you should bring up before signing, if you see it.

Landlords, as covered previously, are the owners of the property and would be responsible for removing trees that fall in the yard. Pennsylvania law states that landlords have to create a safe and habitable environment for tenants to live in, and the absence of rotting trees on the front lawn is a part of that.

Similar to a homeowner, a landlord’s insurance policy may cover tree removals that are needed due to circumstances out of their control. Additionally, if a tenant or someone else is responsible for a tree falling, they could be the one responsible for the removal costs and, potentially, other penalties for destruction of property.

A frequent hypothetical question we get asked about is a tree falling from one lawn to another. In this scenario, the owner of a tree usually wants to know if they have to pay to remove their tree from a neighbor’s property, as opposed to the neighbor needing to remove it themselves. In the majority of situations, the former is what will happen, as the tree’s owner is still the owner even if the tree falls outside their property. However, things get more complicated if the tree’s trunk has grown past the property line, as it would be considered joint property of both neighbors. In that situation, you’d have to work out how to split those removal costs.

Note that this only includes the tree’s trunk as branches hanging past a fence or roots that have grown beyond the property line do not count towards joint ownership. On a related note, neighbors don’t have a right to knock over a tree that doesn’t belong to them just because they don’t like it, though they can trim branches that hang over the property line if this wouldn’t permanently damage the tree. If a neighbor’s tree is posing a hazard to your health and safety, contact the city about having it taken down or just ask the owner to handle it directly.

How Does the Soil Affect Trees in Aston?

The Delaware County soil survey indicates that the majority of soil in the Aston area is made up of silt and loam, with other areas being overtaken by concrete and development or turned into manmade landfills. This means that the land (the silt and loam parts, at least) provides a good amount of nutrients to plants while being easy to till. The properties of silt and loam also make for fairly well-drained ground that is easy to water. Trees like cedar, holly, and maples of all stripes do well here as do many evergreen trees like the pine.

Overall, Aston has hot, humid summers and cold, dry winters. The area is known for receiving a fair amount of precipitation each year, with warmer months averaging over 40 inches of rain and colder months averaging about 13 inches of snow annually. While watering typically isn’t a problem for the city’s trees, anything planted in Aston needs to be adapted to this temperature range to avoid damage during certain parts of the year.

Severe storms may also pose a threat to the community’s trees. Both large thunderstorms and tropical storms run the risk of damaging or completely uprooting trees, with the latter having happened as recently as 2020. Tropical storms also run the risk of tossing seawater around, something that most plants aren’t very fond of. In many cases, there isn’t much one can do to try to prepare their trees against this damage, and with storms becoming more frequent each year, being aware of this possibility is sometimes all you can do.

What if Dead Trees Are Near Power Lines in Aston?

If a tree has grown high enough to interfere with power lines and then dies, that poses a major fire hazard for the entire street. As such, Aston trees are usually pruned to avoid such an issue, then removed once they die. If you were to spot a tree, dead or alive, that looks to be posing a threat to the health and wellbeing of the area where it’s located, report it to the city authorities through their contact form.

How Much Does Tree Removal Usually Cost in Aston?

Tree removal in Aston usually costs around $675. While this is something like a base price for tree removal, several factors can influence your final bill, bringing it down to around $180 or over $2,100 in some cases. Some of these factors are listed below to help you better understand why your final bill is the way it is.

Size is one of the most important factors in determining the cost of tree removal. As you might imagine, bigger trees cost more to remove. This is because taking down a larger tree typically involves a lot of considerations for the safety of the surrounding area, extra people to manage the work, and extra equipment to get the job done. While not a hard-and-fast rule, expect to pay about $100 extra for every 20 feet above 25 feet for a tree that needs removal.

A tree’s location can affect how much it costs to remove it. For example, a tree near a bunch of power lines or an especially tall tree in an urban area is probably going to cost more due to considerations for safe removal and the heavy equipment needed to take it down. This could also refer to the area over which trees cover and how many trees you need removed.

Jobs are usually easier to do when we can actually get to them. Accessibility is key for getting things taken care of in a timely fashion. If we have to fight through a yard full of garbage to get to your tree, it’s a much bigger hassle for us. In the simplest terms, the longer the job takes, the more you’ll have to pay with our hourly rates. Keep your space clean and free of debris to make the job easier for all of us.

Recent Requests We Received From Customers In Aston, PA

looking for estimate to cut down tree in back yard to stump. thank you!

We have a lot of branches to be removed and need a quote.

I need one stump removed from a tree that was cut down.

Pine tree removed in back yard.