Looking for affordable tree removal service in Oregon City, OR? Great! TreeTriage is at your service 24/7. 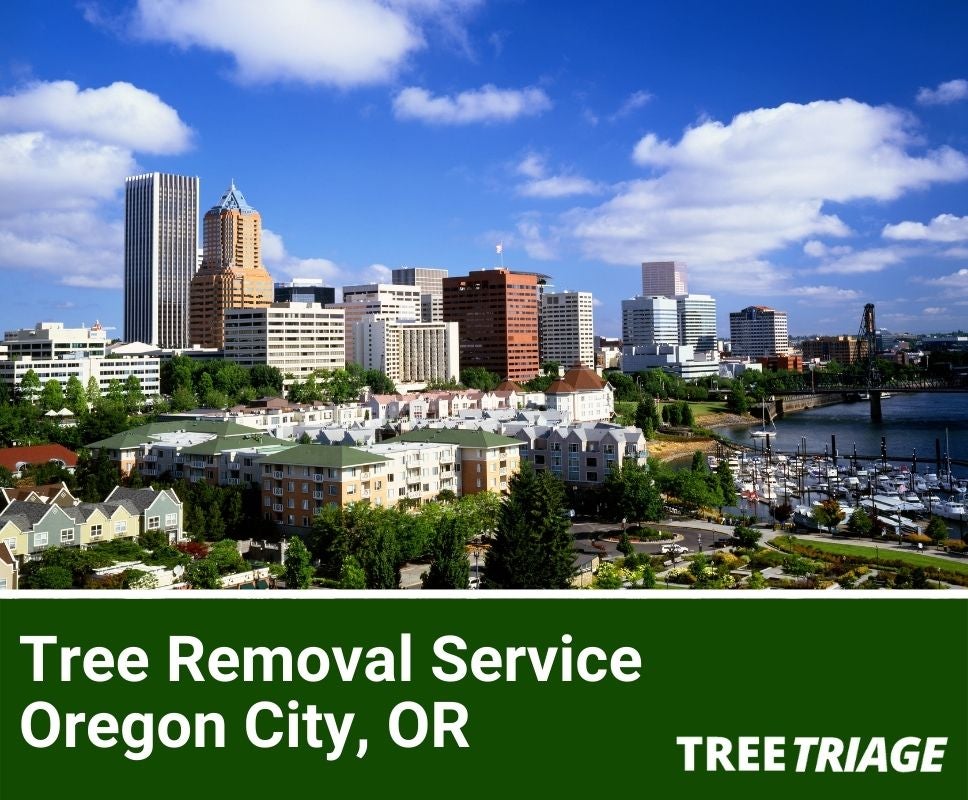 Tell us about your project in the form and we'll get you connected with specialists in or continue reading to learn what you should consider when removing a tree in Oregon City.

What Are the Most Common Tree Issues in Oregon City?

Unfortunately, there are a lot of health issues that Oregon’s trees need to deal with. As their caretakers, it is our responsibility to recognize some of these issues and learn how to deal with them. Some things that affect tree health in Oregon City include:

The roots of a tree will continue to grow for the life of a tree. They search out moisture and the nutrients the tree needs to grow and survive. Often, people plant trees without realizing that in a few years, they will need more room. Tree roots get blocked and obstructed by sidewalks, buildings, roads, and even other trees. A lack of available root space will compromise the tree, preventing it from getting the nourishment it needs. This will stunt its growth. The more the roots have access to water and fertilizer, the less expanding they need to do.

Soil compaction goes hand in hand with root restriction. Any ground that sees traffic or an abundance of use can become compacted. This includes ground close to walkways, parks, and backyards. Soil compaction can crush the roots of a tree, especially a young tree with smaller roots. Furthermore, soil compaction can inhibit root growth. The best way to combat compaction is to loosen and aerate the soil, as well as add amendments.

There are a lot of diseases and pests that can affect and infect trees in the Pacific Northwest. Typically, we see Dothistroma needle blight in pines and evergreens. The disease causes the needles to turn brown and fall off. Severe infections lasting year after year can cause the death of the tree. Some other diseases and pests that affect Oregon City trees are reported by the City of Portland and include:

Not limited to trees, aphids can cause damage to other plant life too. Aphids suck sap from leaves. While they may not do too much damage to larger trees, as their numbers grow, they will kill off leaves turning them yellow and stunt the growth of young stems and shoots. Their excrement in large quantities, known as honeydew, can develop into a black mold fungus.

As their name implies, elm leaf beetles affect only a variety of species of elm trees. They feed on the leaves, leaving lacy holes causing the leaves to eventually drop off.

Dutch Elm Disease is found universally in Europe and North America, affecting most species of elm. The result is death to a lot of these trees. The fungus blocks the water-conducting tissues of the host. It is transmitted from tree to tree by the elm bark beetle from spring until fall. Signs of Dutch Elm Disease include wilting, yellowing, and/or browning of the leaves.

This is yet another fungal disease found in dogwoods, sycamores, and some other hardwood trees native to Oregon City. Anthracnose also causes browning of the leaves, inducing them to fall in mid-to-late summer before normal fall dropping of the leaves.

Another fungus, this one grows in the soil and preys upon already damaged or stressed trees. Leaves brown and fall. It affects various species of ash, dogwood, maple, and redbud trees in varying degrees.

Does the City of Oregon Provide Any Assistance in Tree Removal Problems?

Oregon City wants to hang on to all its trees whenever possible. Therefore, the city wants to limit tree removal to the following conditions:

The city is responsible for trees on most city-owned land.

However, street trees, those in a planter strip alongside a homeowner’s property, are the responsibility of that homeowner, according to the city’s planning department. Street tree removal can only be done upon obtaining a permit. The permits are free.

The city’s planning staff is happy to work with homeowners on decisions regarding tree life within city limits. The city maintains a list of approved replacement street trees. Instead of replanting yourself, you may pay a fee to have the tree replaced by the city. In some cases, homeowners may plant a tree in their front yard within 10 feet of the street as an alternative. That tree will be designated as a city street tree.

Who Is Responsible For Fallen Tree Removal In Oregon City?

The responsibility of removing a fallen tree depends upon the location of the tree.

A renter has no responsibility for tree removal unless otherwise stated in a rental or lease agreement.

The landlord has the same responsibilities as a homeowner for the trees on his or her property and street trees. The exception would be if there is a clause in a rental agreement stating the renter of the property is responsible.

If a neighbor’s tree falls onto your property, it is your neighbor’s responsibility to have it removed. Sometimes, there are trees located right on the property line between two properties. Generally, this calls for an agreement between the two property owners to split the cost of tree removal.

How Does the Soil Affect Trees in Oregon City?

No matter where a tree is growing, the soil is one of the largest components of its health and safety. Soil stores water and the nutrients responsible for tree growth and longevity. The soil is also responsible for the stability of the tree.

Oregon City sees a lot of rain. That rain can leach normal minerals out of the soil, leaving the soil more acidic. This is true in Oregon City. According to Metro Master Gardeners, the best soil has a 7.0 pH level (the number of hydrogen ions in the soil). As hydrogen ions increase in the soil, its pH decreases, making it more acidic. Oregon’s soil has between 4.8 to 6.2 pH levels.

However, most trees can grow and live in Oregon City’s soil. The pH levels here are also good for flowering plants; they are not so great for growing vegetables.

Weather can indeed affect the health of trees anywhere. Uncommon weather can be particularly hard on trees. Oregon City’s high temperatures average in the mid-80s during the summer. In the winter, we experience lows in the mid-to-upper 30s. The below problems also affect tree health in the area.

Oregon City experiences an average of 43 inches of rain per year. We also see a little snow, amounting to about two inches. The sun shows itself, on average, for 142 days per year, but as you know, we often have overcast days.

Our trees are used to an abundant amount of rainfall and like it. When we experience unusually dry weather leading to drought-like conditions, it can be hard on our trees. Results include a lack of growth and making the trees more susceptible to pests and diseases. In this incidence, routine watering is necessary to make up for the loss of rainfall.

When unexpected weather hits any area, it is hard on the tree and plant life. Extremely hot temperatures will deplete the soil of moisture and nutrients. Trees can also get sunburn.

Likewise, extremely cold weather which trees are unaccustomed to can cause problems including freezing branches and leaves. In February 2021, Oregon City and other parts of northwest Oregon experienced a major winter storm, leaving many without power for days. Our trees suffered, too. Many were damaged while others were downed in the storm.

Oregon City asked its residents to document the damage while offering information about how to care for trees following the storm. Property owners found themselves having to remove some trees that were healthy just before the incident, and special tree debris drop-off locations were set up for residents.

What If Dead Trees Are Near Power Lines in Oregon City?

Dead or fallen trees near power lines constitute an emergency. You should never try to trim or prune branches near high voltage lines. If you see any downed trees in contact with high voltage wire, not directly on your property, you should call Portland General Electric or 911. If a tree or branch falls near lines on your property, you should make arrangements to have it taken care of immediately. If they are in direct contact with the power lines, call Portland General Electric or 911 immediately, day or night, and stay away from the area.

How Much Does Tree Removal Usually Cost in Oregon City?

Whether you have a downed tree or need a tree removed, we can help get the situation under control. The cost of tree removal has several variables, which we’ll discuss below.

Is the Tree Still Standing?

It will cost less to remove a tree that has already fallen. However, the tree will still have to be cut into removable sections. That is the bigger task, although it will reduce the cost somewhat.

A tree that is harder to get at will cost more to cut down and remove than a tree in the middle of an open yard. If the tree is close to the house or another building, or close to power lines and/or a pole, we will have to do more to protect and work around those objects.

Recent Requests We Received From Customers In Oregon City, OR

I need three trees in my back yard topped (trimmed). 30 feet tall with some broken limbs from the Ice storm. None of the limbs that need to be cut/trimmed are more than 2 or 3 inches in diameter.

We need 3 stumps grinded. They are about 2-3 ft in diameter. Please get us a bid. Thanks!

Tree branch clean up and haul away.