Looking for affordable tree removal service in Chesterland, OH? Great! TreeTriage is at your service 24/7. 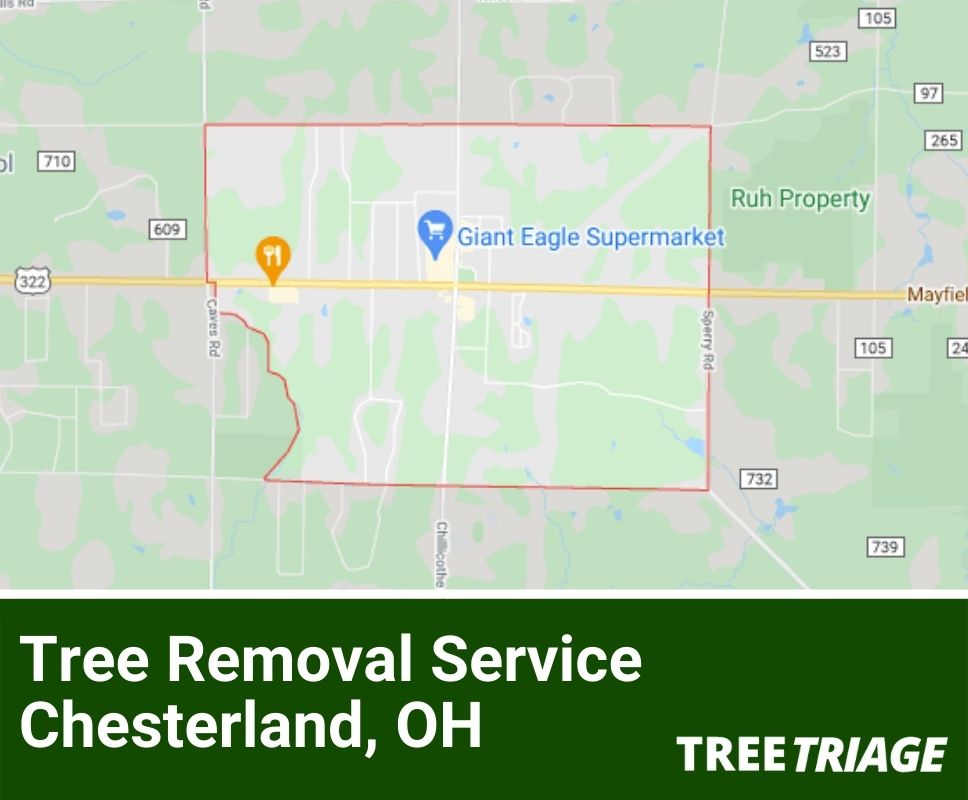 Tell us about your project in the form and we'll get you connected with specialists in or continue reading to learn what you should consider when removing a tree in Chesterland.

What Are the Most Common Tree Issues in Chesterland?

European gypsy moths, particularly their caterpillars, pose a significant threat to trees in the Chesterland area and throughout much of Ohio and the Midwest. Although adult European gypsy moths are not particularly problematic, the caterpillars of these insects frequently defoliate the leaves of hundreds of species of trees throughout the region, especially willows, aspens, cedars, birches, oaks, poplars, and fruit trees.

While eating these leaves does not automatically kill trees, it destroys one of the trees’ primary forms of protection from other types of hungry pests, diseases, strong wind, or other environmental factors, and other issues. Trees that become more vulnerable to these issues as a result of defoliated trees often die within a few years of infestation and there is no known cure at this time.

Residents of the Chesterland area that notice visible caterpillars, chewed leaves, or other indications of a European gypsy moth infestation should report the problem to the Ohio Department of Agriculture to have the trees inspected and receive advice about the next steps to take to attempt to save nearby trees that have not yet been infested.

The Asian longhorned beetle is another type of hungry pest that is common in the Chesterland region and across Ohio. These insects are becoming a major threat to hardwood trees in Ohio, as well as New York and Massachusetts, as they are spreading throughout these states quickly and have no cure at this time. Typical signs that Asian longhorned beetles may be living inside a tree include pencil-sized holes and other depressions that are chewed in the bark, sawdust buildup near these holes, and yellow or droopy leaves that prematurely fall off your ashes, birches, elms, maples, willows, and other hardwood trees.

Chesterland residents can report signs that may indicate the presence of Asian longhorned beetles to the USDA Animal and Plant Health Inspection Service to learn about advice for removing trees as needed or other options for keeping the beetles from spreading to the rest of your trees.

The Emerald Ash Borer has been found in Ohio, although it is somewhat less common than it is in many other states in the Midwest. Even though there are not as many of these insects in Ohio at this time as there are in other states that are dealing with them or other species of hungry pests in the state, the Emerald Ash Borer is still very damaging in the areas where it has been found and still has the potential to become a much more urgent problem if it continues to spread.

These beetles bore into the bark of all sixteen species of ash trees, which can have an impact on the trees’ ability to get enough food and nutrients and can result in leaves that turn yellow, or become unusually thin or wilted. Although there are a few treatment options available for trees that are infested with the Emerald Ash Borer, they are not very successful, and keeping the beetles from spreading across a state that currently has fewer infestations than most other states that it has been found in is a crucial aspect of protecting ash trees in Chesterland and throughout Ohio.

Although Ohio is not particularly prone to earthquakes, the Chesterland area experiences significantly more than the rest of the state. Several earthquakes with magnitudes of up to 5.8 have been felt in the Chesterland area over the past few decades, and two have occurred within fifteen miles of the area during this time. While this data is still below the national average and most minor earthquakes do not cause significant damage to trees, this part of Ohio has the highest potential in the state to experience broken branches or downed trees from an earthquake in the future.

Does the City of Chesterland Provide Any Assistance in Tree Removal Problems?

Chesterland does not provide any assistance with tree removal. Considered a census-designated place, rather than a city, town, or village, Chesterland has no official website and any potential assistance with trees would occur on the county level. Chesterland’s utilities, emergency services, and other needs are also handled by Geauga County. However, many of our team members are located in Geauga County and are available to residents of Chesterland and surrounding areas. Consulting our experts is likely your most helpful first step if you experience fallen trees, notice possible signs of diseased trees, or have other concerns regarding your trees.

Who Is Responsible For Fallen Tree Removal in Chesterland?

Like most states, Ohio generally places responsibility for fallen tree removal on the owner of the property where the tree lands, particularly if it falls during a storm. Trees that fall at other times may be the responsibility of the owner of the tree, as healthy trees rarely fall for no reason on their own, which means that trees that do not fall during a storm are likely diseased or otherwise weakened.

Renters are not responsible for fallen trees. However, you should let your landlord know what happened as soon as possible so that any damage can be assessed and the tree can be removed.

Landlords’ responsibilities regarding fallen trees typically align with those of homeowners. You will need to have trees removed from your tenants’ yards unless a neighbor was clearly at fault.

How Does the Soil Affect Trees in Chesterland?

Soils in Ohio tend to be slightly acidic, which contributes to preferred growing conditions for many species of trees and other plants that are native to the area. The region is also home to significant Miamian soils, which typically drain well and are high in lime, which is a good natural source of food for trees and is frequently used in fertilizer.

Ohio frequently experiences strong thunderstorms and tornadoes, especially in the summer. These storms often cause several types of damage to trees, such as blown-off leaves, downed branches, and uprooted young trees. More severe storms can also knock over larger trees, especially those that have been weakened by disease or hungry pests. Lightning is also a concern, as a direct lightning strike can instantly kill a small tree with a narrow trunk, and larger trees can experience damage that significantly weakens them or prevents them from obtaining enough nutrients. Other natural disasters and weather-related concerns are not common in Ohio.

What If Dead Trees Are Near Power Lines in Chesterland?

Chesterland residents should contact AEP Ohio for assistance with pruning or removal of trees that are located on or near power lines. Never attempt to remove a tree from a power line yourself to prevent electrocution or other potential injuries or damage to your property.

How Much Does Tree Removal Usually Cost in Chesterland?

Although there are several factors that can affect the total cost of tree removal services, tree removal in Chesterland typically costs an average of $775 per tree. This figure, which is slightly below the national average, will cover any labor costs associated with tree removal, as well as cleanup fees and any special equipment that may need to be used to cut down trees and remove them from your property.

The Chesterland area does not require permits for tree removal under most circumstances, but any additional fees that may be associated with permits will generally not be included in this cost. Permit fees would normally be paid directly to the city, but fees in Chesterland would be paid to Geauga County since it is not designated as a city and does not have its own government.

Many tree removals we get called for are emergency services, in the case of a fallen tree or one that is dead or dying and at severe risk of damaging property. We’re available 24/7/365 to serve you, but calls outside of normal business hours come with a small upcharge for the inconvenience.

Some of your trees may be more difficult to remove than others based on their specific location, especially if you have a large property. Trees that have enough room to fall in the open without landing on a building, power line, or other obstacle are quicker, easier, and less expensive to remove than those that are close to homes and need to be cut into pieces to safely remove. Likewise, trees that are especially close to buildings may have roots underneath the building that may be difficult for us to remove without compromising the stability of the building.

Similarly, most large trees are more difficult to remove than small trees. The tallest trees can sometimes cost up to twice as much to remove as small to average-sized trees, especially if they are also large in diameter. Large trees tend to be more likely to need to be cut into pieces to remove safely, as well as to require a crane, extra-large truck, or other special equipment to remove.

Recent Requests We Received From Customers In Chesterland, OH

I have an old stump in my back yard I need taken care of. I would like a call please.

Would like a quote on cutting and removing a tall tree at the front of my house.

to remove two young trees and the stump. If possible save the trees to sell or donate.

4-5 limbs hang over the roof of the house.

Got an oak tree needs a good trimming.