Looking for affordable tree removal service in Troy, NY? Great! TreeTriage is at your service 24/7. 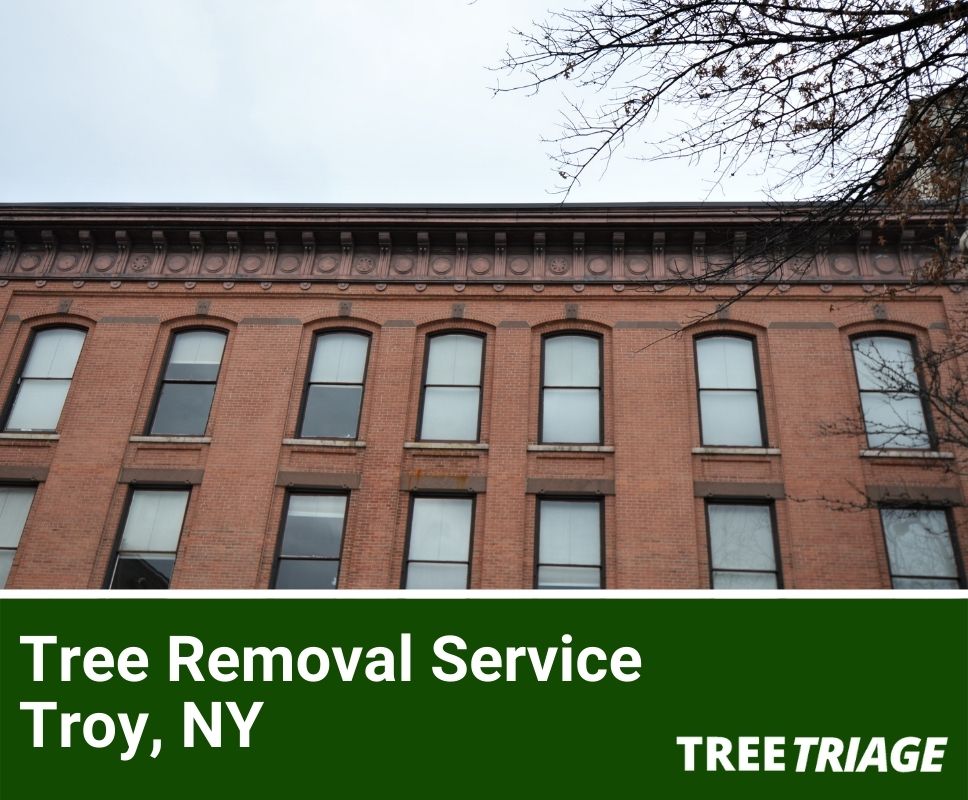 Tell us about your project in the form and we'll get you connected with specialists in or continue reading to learn what you should consider when removing a tree in Troy.

What Are the Most Common Tree Issues in Troy?

The trees of Troy have a few common issues they need to deal with throughout the years, chief among them being pests. One of the most dangerous pests trees in Troy have ever had to deal with is the emerald ash borer (Agrilus planipennis). Primarily infesting ash trees, these insects lay their eggs on the outsides of healthy trees, the larvae hatching and chewing through the tree’s bark to feed on its insides. If allowed to grow out of control, the ash borer can devastate the tree population in an area. In recent times, 80 trees had to be destroyed and replaced after an infestation.

While not as common in Troy, New York does have quarantine areas for both the Asian longhorned beetle (Anoplophora glabripennis) and the European gypsy moth (Lymantria dispar dispar). These bugs can be just as devastating as the ash borer, so it’s important to ensure you aren’t spreading their eggs when you leave a quarantine area. It’s also smart to stay vigilant, as their presence in other parts of the state could easily mean they might move over here one day.

Given that Troy is located right along the bank of the Hudson River, the famously polluted water can potentially harm trees if not treated before use. Any sort of flooding or other weather phenomena that causes water from the Hudson to flow onto trees could damage those that aren’t adapted to using the contaminated water.

Troy can also get very cold during the winter, even having had massive ice storms in the past. This can obviously be very harmful to trees and kill them where they stand if efforts aren’t made to keep them warm and protected from the ice.

On the less devastating side of things, more mundane dangers Troy’s trees face are things like the common termites, damage from car crashes, and tree diseases caused by improper pruning. While not as flashy as some of their other dangers, these are still important issues to look out for if you’re in charge of a tree on your land.

Does the City of Troy Provide Any Assistance in Tree Removal Problems?

Troy doesn’t provide assistance for tree removal, stating that trees that fall on a homeowner’s property or that are cut by professionals must be removed by the responsible party. While the city does offer yard waste collection services that do pickup leaves, branches, and even pieces of trees, the bags collected for this service can’t be any longer than three feet by six inches and must be under 30 pounds, meaning you can’t exactly slip a whole tree into one of them and call it a day.

Who Is Responsible for Fallen Tree Removal in Troy?

Determining who’s responsible for removing a fallen tree on private property isn’t always obvious. Between the question of ownership, fence laws, insurance, and costs, there’s a lot to juggle before you even make the call to get rid of it. However, if you can remember a few key things, you should be able to resolve any ownership disputes and figure out who’s on the hook for getting rid of a toppled tree.

Homeowners own the trees that grow on their land. Therefore, a homeowner is responsible for removing any trees on their property that fall. That means that, unless someone else came along and chopped it down, you’ll be paying for the removal services yourself. Before you hop on the phone with us, though, take a minute to review your insurance policy. For many people, tree removal is covered in many situations, so you could potentially reduce your bill by a lot by going through insurance.

Renters don’t usually own the property they live on (that’s kind of the point of renting, after all). As a result, they also don’t own any of the trees that might be growing on that land. Unless a renter has done something to cause a tree to fall, it would be the landlord’s responsibility to have it removed as part of the warranty of habitability inherent in rental agreements in New York.

The warranty of habitability in New York state rental laws specifies that landlords must create a safe and livable space for tenants, both in an apartment itself and the surrounding grounds. As such, removing trees that could rot, host pests, or obstruct walkways is a necessary part of renting land. Similar to a homeowner, landlords might be able to use insurance to help offset the cost of removal. Also like homeowners, if a tenant or other party is responsible for knocking over a tree on rented land, that person would be the one responsible for the removal costs and potentially other damages.

A neighbor’s tree falling onto your yard is never a good time. The question of ownership comes up a lot in scenarios like this, so the easiest way to resolve this issue is to point out that the tree still belongs to the person whose yard it grew in prior to falling. Trees are considered the property of whoever owns the land that their trunk grows on, meaning that any overhanging branches or roots grown past the property line do not mean a neighbor is also responsible for the tree (though they can trim branches as long as they don’t cause permanent harm to the tree). A trunk growing past the property line would be a different story, though, and could mean that both parties are co-owners of the tree that split costs for removal. Whatever the facts may be, addressing this judiciously is probably the best way to avoid starting a war with your neighbor.

How Does the Soil Affect Trees in Troy?

The Rensselaer County soil survey indicates that much of Troy’s soil is composed of loam, silt, and larger rocks. While much of the city’s land has been developed and filled with concrete, the land that remains is generally good for planting. However, the urban pollution in the area could mean that segments of land aren’t as nutrient-rich as they may need to be to raise healthy trees, so we recommend taking a soil sample to better understand what you might need to add to the ground before you plant. Maples are one of the best trees to grow here thanks to being able to weather the cold. Evergreens are good for similar reasons. Ash trees are also plentiful in the city.

Troy tends to have warm summers and very cold winters. Ice and snow are not uncommon during the colder months, with ice storms being a danger depending on the year. Any trees planted in the city need to be able to deal with the cold, otherwise, they risk freezing entirely and dying. During periods of heavy precipitation, flooding is also a danger for the town given its proximity to the Hudson River. In addition to the normal dangers of flooding, this also poses a risk of washing trees with the contaminated water from the river itself.

What If Dead Trees Are Near Power Lines in Troy?

In general, trees on public land shouldn’t be growing tall enough to interfere with power lines in Troy. If one does, however, the city is responsible for removing any dead trees on public property. This includes trees under power lines and anywhere else.

If a tree dies under power lines on private property, the owner of the tree would be responsible for having it removed just as they would in any other situation. However, given the nature of the situation, residents who aren’t quick enough with removal could potentially have the job taken care of by the city in exchange for some fines or other penalties.

How Much Does Tree Removal Usually Cost in Troy?

Removing a tree in Troy costs about $675 on average, with prices ranging from $315 to $2,187 depending on a number of factors. These factors can vary by job, though a few common things that might change the number on your bill are:

Size might be the most important factor in determining the cost of your tree removal. As you might imagine, bigger trees mean a bigger bill. Between the time and effort needed in planning the removal and doing it safely, a tall tree is just a much bigger hassle to deal with. In general, imagine about a $200 price jump every 20 feet or so above an initial height of 20 feet.

It should come as no surprise that more trees equals more money. Whether we charge for your specific job per hour or per tree, you’ll be expected to pay more the larger the scope of your removal project happens to be. Additionally, more trees in the same area might necessitate the use of heavy equipment, which itself often means a larger bill due to the considerations for using large machines in residential areas.

Like with most things, calling us out for an emergency tree removal will usually add some extra fees to your bill. While it can’t be helped if there’s a tree that has crashed in your living room, it’s still a hassle to send people out on short notice. This goes double for weekends, holidays, or after-hours calls. Typically, you’ll be paying at least overtime for these sorts of calls.

Recent Requests We Received From Customers In Troy, NY

We are interested in tree removal and clearing of a wooded area in our yard, as well as removal of a hedge. We would like the ground improved, backfilled, graded and sodded if you do that as well.

Have trees that keep falling on to our property damaging fence and some that will soon hit barn. Would like assessment for removal. And a check for any dangerous trees close to our house.

I'm looking for either pecan or oak to mill up for lumber. Was wondering if you ever get any good sized ones that you've removed?

Have a stack of cut down sm trees and a stack of grapevines that need to be removed from property.