Looking for affordable tree removal service in Middletown, NJ? Great! TreeTriage is at your service 24/7. 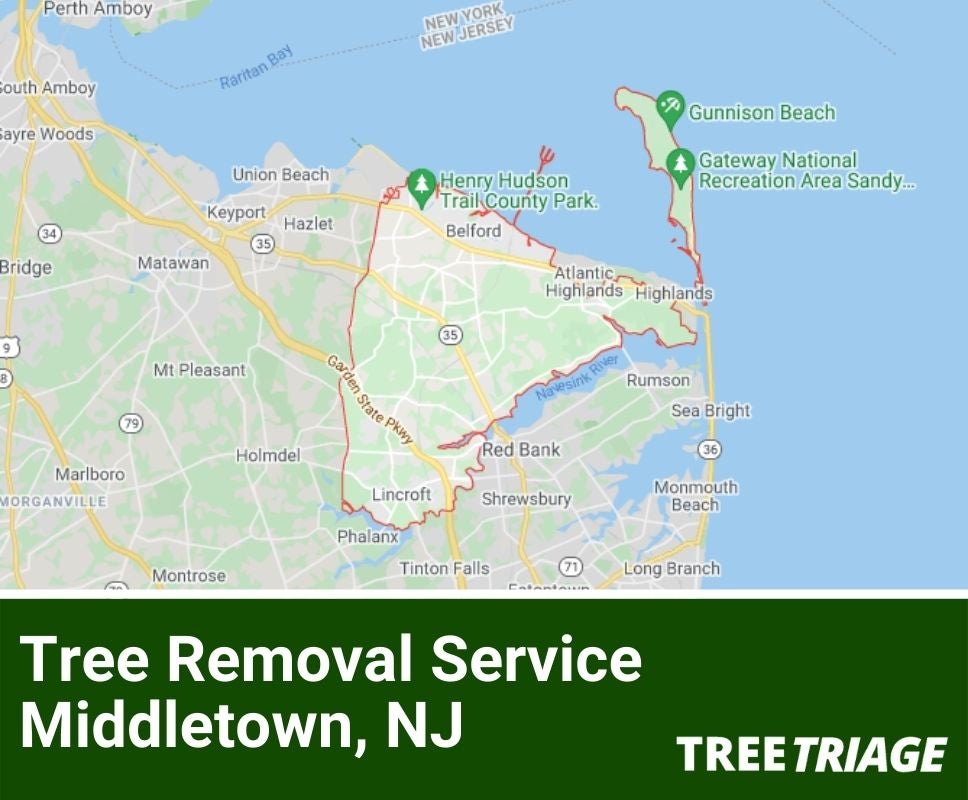 Tell us about your project in the form and we'll get you connected with specialists in or continue reading to learn what you should consider when removing a tree in Middletown.

What are the Most Common Tree Issues in Middletown?

Middletown is located in Monmouth County and is considered one of the famous townships in New Jersey. Besides, it’s a bedroom community of New York City and has been named one of the best places to live in and to raise a child by CNN Business and Safe Wise, respectively.

These alone are enough reasons to draw homeowners to Middletown. Together with the rich vegetation cover, there’s a quality of life and fulfillment in Middletown municipality. According to population estimates by the US Censors Bureau, the current population is 65,305.

The Walnut twig beetle spreads the Cankers tree disease and mostly affects the Black Walnut tree species. The beetle attacks tree branches and stems and borers into phloem tissues, thereby hindering food transport to other parts of the plant.

When the invasion is severe, the tree quickly dies in a few weeks due to inadequate nutrients for growth. Besides, the beetle creates an enabling environment for fungal attacks that further destroys the tree.

If you have no idea how to spot the canker disease, here’s what to do: look for signs of branch dieback, tiny holes, and cankers on branches and tree bark.

Oak wilt is a fungal disease affecting tree vascular systems, therefore preventing water transport from the root to all parts of the tree.

The disease starts when beetles attack red or white oak tree species. Unfortunately, it’s more severe in red oaks and can kill the tree within a few weeks.

The signs to look out for include: fungal mats, leaves changing color, and bark cracking. However, the obvious sign is holes in trees. Once you see these signs, the prudent thing to do is act on the problem, especially when the red oak species are affected.

The beech bark disease affects the American and European beech tree species and is caused by the scale insect. The insect inflicts wounds in the trees by piercing and sucking out the juice from them.

When the wounds are fully developed, they create a conducive environment for beech bark disease. The main signs of this disease are: oozing on trunks, sparse foliage, and fungal fruiting.

It’s caused by leafhoppers and spittlebug insects that attack tree xylem tissues, hindering the transport of water and nutrients to other parts of the tree.

The main symptom of bacterial leaf scorch attack is the discoloration of leaves. The leaves of affected trees quickly turn brown along the edges.

The Sudden Oak death disease primarily affects oak tree species like coast live oak. Besides oak trees, the disease affects horticultural plants and causes blight. The disease is devastating and affects tree leaves and twigs. To make it worse, it attacks both old and young trees in nurseries.

Sadly, the symptoms of Sudden Oak death are similar to other tree diseases. So, it may be a hassle diagnosing the situation on your own. Nonetheless, you can get our professionals to help with that.

The Asian Long-horned beetle is an insect attacking a variety of American hardwood tree species. Some of these include ash, birch, elm, willow, mimosa, katsura, golden raintree, and poplar.

Besides, according to the US Department of Agriculture, the infestation can also be spread by lumber, stumps, logs, branches, firewood, and wood debris.

The beetle is quite destructive and, sadly, has no cure after a full-blown infestation. It’s, therefore, a good idea to diagnose the problem and manage the situation early enough.

Potential signs of an infestation include; long-horned beetles on trees, small round holes on tree barks and stems, and discoloration and dropping of leaves.

According to the State of New Jersey: Department of Agriculture, the emerald ash borer has been affecting trees in Middletown and the rest of Monmouth County since 2019. The beetle mostly affects the white ash and green ash tree species.

First, they lay eggs in bark crevices. The eggs mature to larvae which attack the tree cambium. This affects the supply of water and nutrients to other parts of the tree and eventually kills the tree. To diagnose the problem, look for D-shaped holes.

The Eastern Pine Loopers mostly affect pine tree species in Middletown and the entire New Jersey State. The problems start in May when moths lay eggs on tree needles. In summer, the eggs mature to larvae that devour needle notches.

So, when you see brown needles in your pine trees or defoliation, most probably it’s because of the eastern pine loopers.

The Hemlock Woolly Adelgid is an insect that sucks the sap of trees and is closely related to aphids. Besides, the insect is destructive and mainly affects the Hemlock tree species in Middletown, NJ.

Dying limbs and large volumes of eggs on twigs is a sign for Hemlock Wooly Adelgid. Since the insect is quite destructive, it requires proper attention after diagnosis.

The larvae of Gypsy Moths mainly attack oak species and feed on their leaves between May and June. Leaves are the primary manufacturers of food needed for tree growth. However, when these moths devour the trees, they’re left helpless and eventually dying.

Look out for defoliation of leaves, egg masses, and caterpillars on tree leaves to diagnose the problem. This insect is dangerous and can kill the tree in a few weeks, so it needs proper attention from our arborists after diagnosis and before spreading to other nearby trees.

Does the City of Middletown Provide Any Assistance in Tree Removal Problems?

According to Middletown municipality, the Department of Public Works runs several functions, including tree maintenance. Therefore, the Middletown Township allows residents to contact the township authorities if there’s a tree obstructing a road or hanging near power lines.

So, whether the Middletown Township offers assistance in tree removal problems or not, the answer is yes. However, the tree needs to be in a public space. If this condition isn’t met, the property owner remains responsible for the tree removal.

Who Is Responsible for Fallen Tree Removal in Middletown?

Someone has to take responsibility when a tree dies or needs removal for one or more reasons. As we’ve already mentioned, the Middletown Township will be responsible if the tree falls in a public space. However, for private space, either the homeowner, renter, landlord, or neighbor can be held responsible.

Suppose you’re a renter, the responsibility shifts to the owner of the property. Therefore, you can call your landlord or the property management agency.

If you’re the landlord, you’ll need your insurance provider to help with the cost.

Lastly, if you’re a neighbor, you can also be a homeowner, renter, or landlord. Depending on the category you fall in, call the insurance company or the property owner to take care of the tree removal procedures.

How Does the Soil Affect Trees In Middletown?

According to the New Jersey Department of Environmental protection, some soils in the township contain Verticillium wilt—a fungus that lives in soil.

The disease affects several tree species in Middletown, such as maple and redbud species. So, if you’re thinking of having these tree species on your property, you should consider finding other alternatives.

Occasionally, Middletown experiences harsh weather conditions like tornados that destroy several trees at any single time. Sadly, this doesn’t only affect tree health, but also humans. When the tree falls during the devastating storm, they destroy everything on the way, including your and your neighbor’s houses. This potentially renders people homeless.

What If Dead Trees Are Near Power Lines in Middletown?

Dead trees near power lines in Middletown are the responsibility of the Township authority. When you spot one, don’t hesitate to contact the public works department.

Dead trees near power lines pose serious risks to humans, so they need to be removed. However, you may have to call us to remove the tree or get help from your neighbor if the tree belongs to either of you.

How Much Does Tree Removal Usually Cost in Middletown?

The standard tree removal services in Middletown cost between $200 and $1,750. However, the cost goes up by an extra $100-$150 if the task involves removing the stump.

Below are the factors that affect the cost of tree removal in Middletown, NJ:

It costs slightly more to remove aged trees with massive trunks than relatively young trees with smaller trunks. So, depending on the nature of the tree, expect to pay more or less from the average cost.

We charge more to remove trees that are near your home, shed, fence, or other personal property, as our crew will need to take great precautions to ensure nothing is damaged in the process.

Easy-to-access trees will attract a lower cost than hard-to-access trees. If we have to deploy heavy machinery to remove the tree, we’ll have to charge you more.

Recent Requests We Received From Customers In Middletown, NJ

I have a 15' dogwood with a 4 inch diameter trunk that I need transplanted. Also looking for a similar sized dogwood to plant along with it in line. Is this something you would be interested in doing.

I have an infected tree. Not sure if it can be cured. Looking for a diagnosis. If not curable, will you be assist with replacement? Thanks!

After last August tornado and hurricane, I need debris removal as well as tree removal for a new fence installation.

I am looking for a quote to remove one large tree in my yard.

I need a quote to remove a stump from a birch tree.