Looking for affordable tree removal service in Concord, NH? Great! TreeTriage is at your service 24/7. 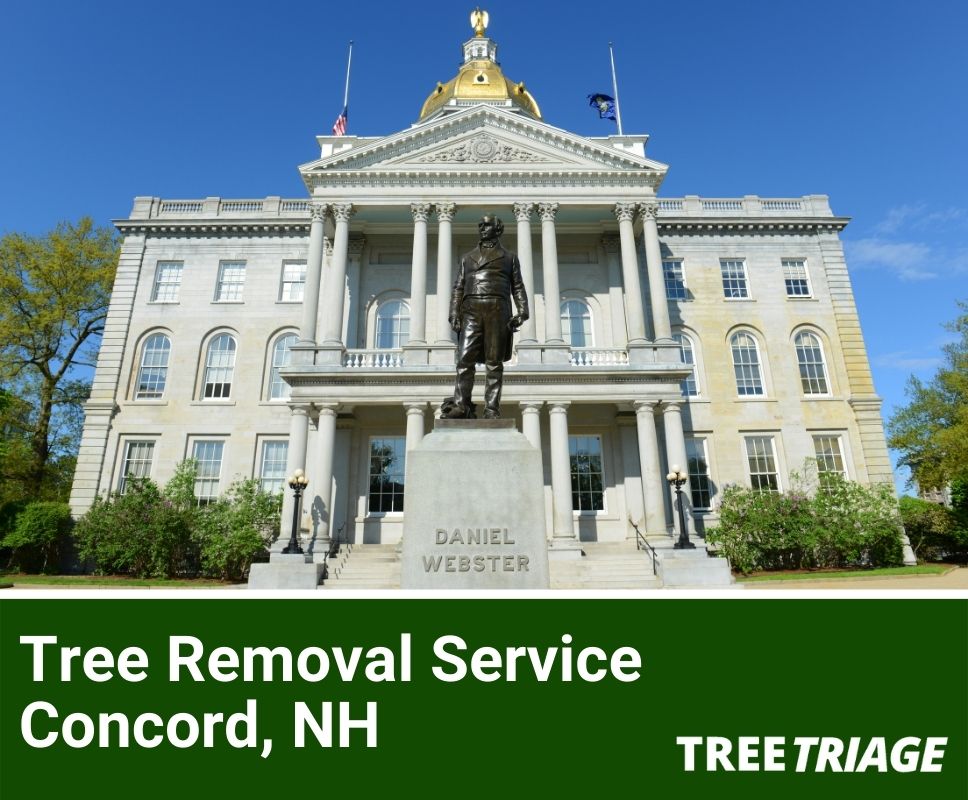 Tell us about your project in the form and we'll get you connected with specialists in or continue reading to learn what you should consider when removing a tree in Concord.

What Are the Most Common Tree Issues in Concord?

You might think that the freezing New Hampshire winters would kill off any invasive tree pests, but you would be dead wrong. Three of the most deadly pests in the country are happy to call Concord home. These are the emerald ash borer (EAB), hemlock woolly adelgid, and the red pine scale. All three are fatal to infected trees, but it can take some years for the trees to die. The city estimates that up to 20% of the local trees will die from invasive insect infections in the next five years. To make matters worse, this is on top of the natural attrition of trees from old age and weather-related damage. One last bit of bad news for trees is that Concord will likely lose every single ash tree in the city to EAB by 2023.

This is a bright green beetle that has spread east in recent years. You can tell if an ash tree is infected with EAB by a D-shaped hole in the bark that indicates the mature beetle has drilled out of the tree, leaving an extremely compromised vascular system behind. Multiply that by hundreds of beetles and you get an idea of how deadly they are.

Because of this imminent danger, the city and state have implemented a response to the EAB threat, which, according to the New Hampshire Department of Agriculture, Markets, and Food, includes detection and monitoring known populations, making science-based recommendations for landowners, recommending the use of best management practices for moving potentially infested ash logs and ash firewood, releasing biocontrol agents to preserve the ash trees of tomorrow, and providing outreach to residents, visitors, and industry about this pest.

New Hampshire is one of the few states that still has a quarantine on interstate transportation of ash firewood. It’s hard to resist chopping up dead ash trees for firewood, and in truth, burning infected wood is a great way to rebuff the spread of the EABs. But the state prefers that if you do use ash for firewood, you abide by the adage of buying it where you intend to burn it.

The hemlock woolly adelgid (HWA) is the least fatal, meaning it is treatable if it’s discovered in time. This is a relatively new tree hazard in Concord. It’s only been a problem since about 2000, but the HWA has decimated hemlocks down south in the Great Smoky and Blue Ridge mountains. The adelgid is a tiny, wingless insect with a bite that’s much tougher than tree bark. The little critters feed on small hemlock twigs. Eventually killing the host tree in four to ten years. In the meantime, the tree continues to get weaker, so it can’t fight off other invasive pests like elongate hemlock scale or hemlock borer. HWA move around Concord and the rest of New England through birds and other wildlife and the transport of infected nursery stock. It’s illegal in New Hampshire to transport inventory infected with HWA, it’s even illegal to move live HWA unless the intent is to destroy them.

If you have hemlocks on your property, you should have us inspect them every year to ensure they aren’t infected with HWA. There are treatment options for a small infestation that range from cutting the trees down to a pesticide cocktail that’s either sprayed or injected into the tree.

Red pine scale attacks – you guessed it – red pine trees. You can tell if your pines are vulnerable by counting needles, two needles per bundle, as opposed to the five on white pines.

The pests are waxy and red-brown, and the females are wingless. Males have wings but don’t fly. They burrow into the tree and inject a toxin into the bark as they feed. At a certain point, the toxins cause chlorosis and extensive bark lesions in the tree, which eventually kills it. The signs of red pine scale are a change in the color of the needles from bright green to light green then yellow to red. Once a red pine is infected, there is nothing to be done. A healthy tree is not at high risk for infestation and you can’t combat the scale by trying to fertilize the tree back to health. That only encourages the insect to thrive and kill the tree faster.

The only solution to an infected red pine is to cut the tree down during the winter months when the pests are dormant. This will prevent the spread of the scale to other red pines.

Does the City of Concord Provide Any Assistance in Tree Removal Problems?

Our state motto, live free or die, isn’t just some random saying from Latin, but it was cribbed from the French Revolution, where they knew a thing or two about that ideal. Anyway, it does speak to our ideals about property rights and the government impinging on them, which is bad, unless there are trees in a public right-of-way that are expensive to remove. The city of Concord will use taxpayer money to remove even privately-owned trees that are deemed a public nuisance as well as any trees that the city owns on public land. Your city taxes pay for routine maintenance of publicly-owned trees to ensure they are healthy and not likely to cause damage to property during storms.

Who Is Responsible for Fallen Tree Removal in Concord?

Believe it or not, the tree owner is not necessarily responsible for removing a tree that falls in your yard. Unless the tree was diseased or dead, it’s on you to make the problem go away. Your insurance will cover the costs based on your deductible, but if your neighbors have a lot of trees, it might be a good idea to get a policy enhancement against this kind of damage.

If your tree falls next door and the tree was healthy, that’s considered an act of God in New Hampshire and you are not responsible for paying for damages, whether it be tree removal or property loss. If, on the other hand, the insurance adjuster finds that the fallen tree was dead or diseased, they can and will make the argument that your neglect caused the tree to topple onto your neighbor’s garage. In this case, you are responsible for all damages.

Residential tenants are not responsible for tree removal on a rental property unless the lease specifically addresses the issue and says such.

Any trees on your property are your responsibility. It’s in your best interest to maintain a healthy treescape for your property value.

You may prune back the limbs from a tree on an adjacent property that are encroaching on your land, but you have to be sure not to touch any branches. Remember that state motto? If you overenthusiastically prune the tree, so much that it loses its aesthetic properties, you are responsible for substantial damages, like triple the value. Have us do any trimming if a neighbor’s tree goes over your property.

How Does the Soil Affect Trees in Concord?

Native Concordians are quite proud of the Marlow soil in the area. In a state with so much granite, loamy soil is great for the trees. The pH levels of the soil are low, between 4.5 and 5.5, making it very acidic. You can amend the soil to a pH range of 6 to 6.5 or close to neutral pH with lime. If you love blueberries, rhododendrons, azaleas, and holly, though, you’re in luck. They thrive in really acidic soil.

The native oaks, maples, and pine trees in Concord also like the soil quality here.

Trees in Concord are primarily vulnerable to wind and ice. It’s a good idea to have your trees inspected every year so that any hazardous limbs are removed before winter storms set in. A half-inch of ice on a branch can cause substantial damage if the branch breaks off and hits a power line or your house.

What if Dead Trees Are Near Power Lines in Concord?

Either Unitil or Eversource is responsible for removing dead or hazardous trees near power lines. Both companies trim limbs back on a scheduled routine and remove dead or fallen trees. In an emergency, they will come and remove a tree that might or already has fallen on the lines.

How Much Does Tree Removal Usually Cost in Concord?

Our tree specialists can’t estimate the cost of removing a tree until they can physically inspect the impacted trees. We depend on both human labor and equipment for tree removal, and the combination of the following factors is what drives the cost. Most removals in the area fall between $200 and $2,100, with an average cost fo around $715.

Both the height and diameter of a tree are critical when it comes to determining the cost. A tree that’s big enough for our crew to climb will cost less than one that’s tall but too skinny to climb. Renting extra equipment also adds to the cost.

Second is the tree’s location in your yard. If there is good clearance, it will cost less than if it’s hard to get to or surrounded by the house and driveway.

Finally, the tree’s health is a factor. Our crew can’t climb a weak, diseased tree, so we’ll need to rent extra equipment to take the tree down.

Recent Requests We Received From Customers In Concord, NH

I've recently taken down softwood trees (pines and hemlocks) and have 6 stumps I would like ground. The largest of these is about 3 feet in diameter.

I have a farm in Mt Pleasant. Need two trees removed. One is over our metal bridge that cars cross get into our place. Need to get a quote.

One tree front yard trimmed up two trees back yard take down also next door home interested getting a quote.

Take down tree in the front yard.