Looking for affordable tree removal service in Southport, NC? Great! TreeTriage is at your service 24/7. 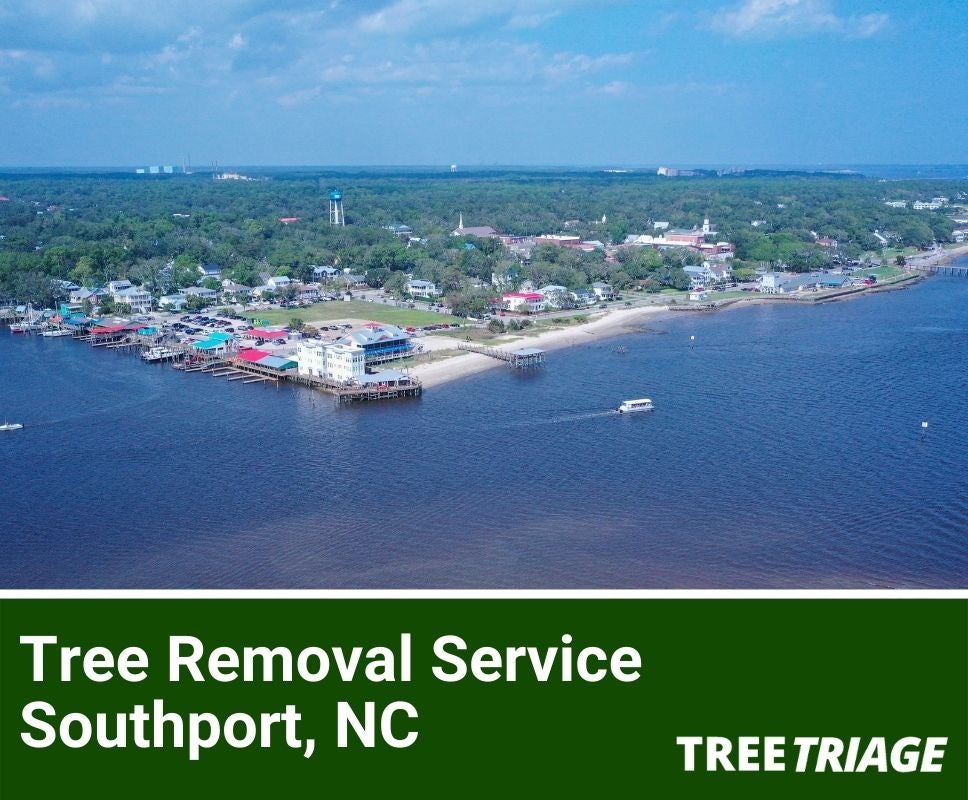 Tell us about your project in the form and we'll get you connected with specialists in or continue reading to learn what you should consider when removing a tree in Southport.

What Are the Most Common Tree Issues in Southport?

The climate of Southport, North Carolina is one common to the U.S. South, as in hot summers and short windy winters. All of that can wreak havoc on local trees, even though every citizen here values the trees available.

Southport’s trees are always colorful and make up a diverse list of species. They include Red Maple, Loblolly Pine, and Live Oak with many of them as old as 100 years or more.

While these bring beautiful colors to local areas, they can easily turn to darker shades when disease and insects strike. One of the most common tree insects in this area is the Emerald Ash Borer that typically goes after ash trees. Beetle larvae feed on tissues under the bark, disabling the tree’s ability to transfer nutrients.

Other insidious insects found here include the Gypsy Moth and the Hemlock Woolly Adelgid. All of these do similar damage to tree bark and bring tree death within three to five years.

Numerous diseases also can strike trees here, despite the best efforts from arborists to prevent them. Thousand Cankers Disease is still overly prevalent. Sudden Oak Death is also feared on our valued oak trees. Even the famous Indian Trail Tree here in Southport (thought to be 800 years old) was attacked by a mysterious tree disease back in 2018.

Along with persistent nature, humans also cause tree issues. Once in a while, a car might hit a valued tree, bringing it down instantly. Construction crews also sometimes disrupt trees during construction work.

Does the City of Southport Provide Any Assistance in Tree Removal Problems?

Based on local laws, all Southport residents need to obtain a permit before a tree can be removed on public or city property. These are known as regulated or specimen trees.

To get the permit, residents have to go through Southport’s Planning & Inspections Department. On occasion, the city might waive the need for any permit if the tree poses a risk after a major storm, or causes an immediate disruption to public services.

The City Manager then makes a determination on whether new trees are planted in place of the removed ones. All steps (plus analyzing the prior tree) are done by a city arborist who comes to inspect the tree in question.

Procedures like this are fairly common everywhere in removing trees when they pose dangers to property or life. Our team sometimes helps the city take care of tree issues, no matter where the tree is located.

Who Is Responsible For Fallen Tree Removal in Southport?

Local residents sometimes puzzle over who takes responsibility for fallen trees. It makes sense considering some trees fall on property lines that might make more than one person responsible.

For the most part, anyone who owns their own tree takes responsibility, other than some exceptions. Much depends on whether a resident is a homeowner, rents, owns rental property, or is a nearby neighbor.

Owning a home means having to take care of a lot of things, including the yard. Any resident owning a home here in Southport is going to have sole responsibility for any tree falling on the property.

Based on Southport law, all homeowners should adhere to North Carolina’s basic negligence theory that says any dangerous tree to another property needs care or removal.

In the case of personal damage to a home on that property, the homeowner needs to turn to a homeowners’ insurance policy to get damages covered. It’s possible, however, the insurance company would pick their own tree care company to get the debris cleaned up.

Homeowners can choose their own tree specialists if the tree falls in the yard area without causing damage. We frequently help homeowners take care of trees posing danger to avoid any sense of negligence.

Any renter should let the landlord take care of a fallen tree. A landlord is like a homeowner and does similar preventative tree maintenance to prevent risks. Once in a while, a renter may agree to take care of the tree if the contract stipulates yard maintenance and, specifically, tree removal. Or, the renter might have planted the tree on their own.

The landlord usually takes responsibility for trees on the land they own. It’s not overly common to see rental agreements stating tenants are responsible, but it can happen.

Local laws in Southport don’t have a definitive statute in place on deciding whether a neighbor is truly held liable if one of their trees goes over on another neighbor’s yard or house. The basic common law idea of negligence is adhered to when the tree was a definite danger to another neighbor and nothing was done to amend the situation.

A judge may have to make the final call on this due to no set laws in place. Still, it might mean a lawsuit taking place by the neighbor based entirely on tree negligence.

Our team is always available to help neighbors and homeowners take care of diseased or dying trees. Doing so is a better way to avoid potential legal complications later.

How Does the Soil Affect Trees in Southport?

Soil is always important to how a tree flourishes here in the city. Southport has a lot of Cecil Soil, the official state soil. It’s known for being mostly a sandy loam, a good mixture of sand, silt, and clay. A combination like this is a very good soil type for growing trees and lots of other plants.

One of the greatest benefits is the clay since it holds water very well. Sandy loam soils are known for their good drainage, making it possible to grow trees without too much effort.

Still, some care is needed when working with clay elements in this soil. It can dry out fairly easily during Southport’s hot summers. Frequent irrigation and mulch are a good idea during those months.

During the winter, sandy loams could become overwhelmed from too much water if a major rainstorm hits. Even then, the better drainage makes it less apt to cause severe issues with copious amounts of water.

Every resident should check their soil type around their Southport home. If not finding sandy loam, it can easily be created for a tree’s benefit.

Every Southport resident has experienced at least one severe weather issue here in the city. The biggest is the threat of hurricanes and general windstorms. Tornadoes are the most frequent type of wind event, wreaking havoc on trees in mere hours.

Weakened trees here can easily topple with just a small wind gust under 60 mph. Those who’ve lived through major windstorms know what it can do to trees, leaving a wide swath of debris to clean.

When this happens, our crews take on heavier demands, if always getting the job done. Regardless, other unexpected weather events can come up, with drought being one. Wildfires could also happen during overly dry periods, leading to thousands of our old and valued trees being decimated in one day.

During these weather scenarios, no one can do anything other than hope for the best. Proper preventative care of a tree by our team can help local trees withstand some of these events.

What If Dead Trees Are Near Power Lines in Southport?

Brunswick Electric is typically responsible for situations where a Southport tree falls on local power lines. Sometimes the utility company works with us to help with the cleanup process and the same applies to working with city trees.

It takes a larger team when trees disrupt power lines after major storms. After all, with power possibly knocked out, residents can get impatient if the debris isn’t taken care of within a reasonable time frame.

What residents shouldn’t do is attempt to remove tree debris from power lines on their own. The dangers of this are far too great, especially if having no contact with Brunswick Electric on whether the power is really off.

Whenever our team works with local power utilities to clean up dead trees, we make sure the power is off for the safety of our workers. Patience is the key to getting this job done right and safely for everyone involved.

How Much Does Tree Removal Usually Cost in Southport?

Removing a tree takes considerable work, so what someone pays is going to vary considerably based on the unpredictable aspects of nature. Other circumstances can apply as well.

Take a look at some other things affecting cost:

Some trees are so diseased, it takes extra time and effort to ensure debris is cleaned up thoroughly. A diseased tree could risk exposure to humans or pets, causing potential illness.

Only tree professionals like ours should handle a diseased tree. Yet, a tree may already be dead from other factors. In all cases, it takes more time to get rid of a diseased tree than if it was healthy. Expect things to prolong further if the diseased tree is overly large.

Southport still has remote areas where people live. Despite the enjoyment of living in the backwoods country, a felled tree there can be complicated to remove. Extra equipment to clear away brush and haul away debris is required by our team to get this done efficiently.

Not everyone realizes removing the stump from dead trees is a task that’s usually done separately from the initial cleanup phase. Extra charges are going to apply to take care of the stump, especially when it’s huge due to the tree’s considerable age.

Or, many choose to leave the stump where it is, especially when it can easily blend in with the surroundings without causing any dangers.

Recent Requests We Received From Customers In Southport, NC

A large branch that has grown over our house to be removed.

Need a Bradford Pear tree in my back yard removed.