Looking for affordable tree removal service in Franklin, NC? Great! TreeTriage is at your service 24/7. 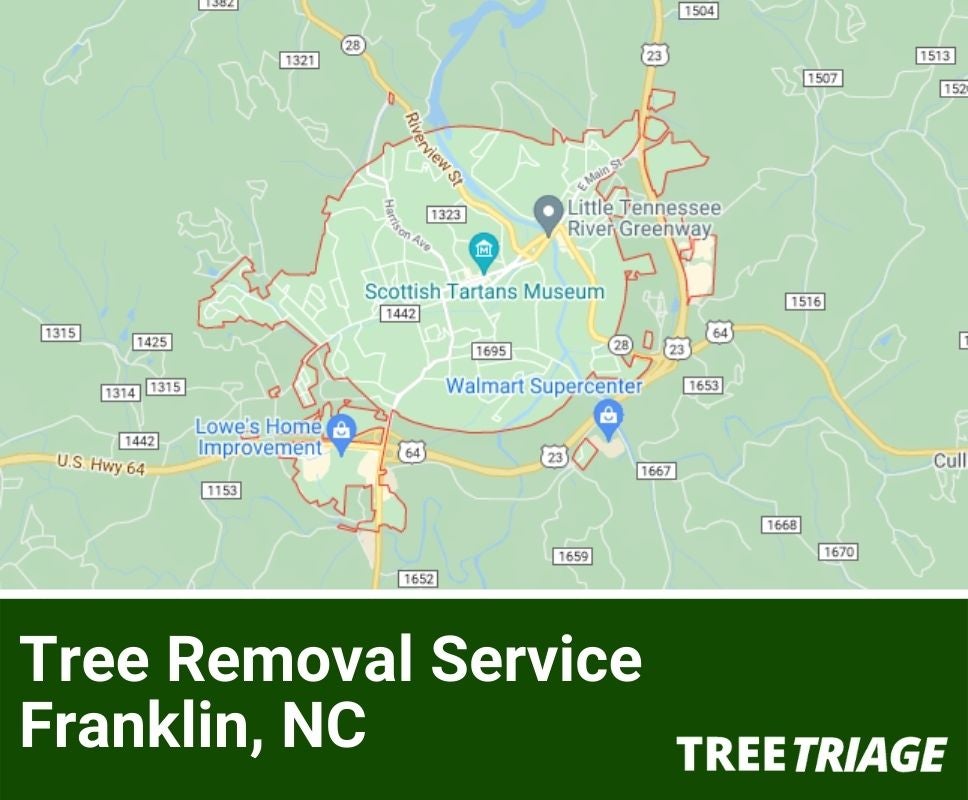 Tell us about your project in the form and we'll get you connected with specialists in or continue reading to learn what you should consider when removing a tree in Franklin.

What Are the Most Common Tree Issues in Franklin?

According to the Franklin Chamber of Commerce, Franklin Town has been named the best place to retire. Amongst the many reasons for this are the beautiful sceneries, including the Blue Ridge and the Great Smoky Mountains.

Besides, Franklin has a rich vegetation cover with a variety of tree species. Nonetheless, there are some issues affecting trees. So, what are they? You could be asking. According to the North Carolina Forest Service, the common tree issues in Franklin, NC are tree diseases and insect pests.

To be specific, some of these issues include leaf disease, stem and branch disease, root disease, vascular disease, defoliators, bark borers, wood borers, twig and bug insects, and sucking insects. This is the sneak peek view, so let’s quickly get to the details!

As the name suggests, this disease affects tree leaves. Sadly, they aren’t choosy; they attack both broad and needle-like leaves. The leaf disease is easy to spot in trees since leaves are often exposed. This also explains why leaves are susceptible to disease attacks.

The impact of leaf disease varies depending on the type of infection. This is to say, while some leaf diseases are harmful, others may not be.

What do we mean? Here’s the thing: Some infections disappear as soon as the leaves drop while others spread to the rest of the tree. It’s the latter type of leaf disease that’s dangerous and more destructive.

Think about it. Trees make food through the leaves, meaning that there won’t be enough food for the tree if the leaves are infected. This eventually kills the tree.

Stem and branch diseases are common in Franklin and easy to spot. All you need are the signs to look out for. The already affected trees have galls and cracks and exhibit an irregular growth pattern.

Other signs to raise the alarm are weeping wounds, cavities, and fungi attacks. Many times, you’ll spot these signs in the early days. Therefore, it’s best to quickly find an amicable solution before the disease spreads to the rest of the tree(s).

Stems and branches play an important role in holding the tree together. Besides, they host the leaves which produce food for the entire tree. Therefore, it’s best if they’re always healthy and strong. If there’s a reason to treat the infected stems and branches, this would be it.

Root diseases affect the roots of a tree and can be hard to notice because the roots are buried in the ground, so it’s tough seeing the signs when they first appear. Sooner or later, the symptoms are transferred to the leaves.

Vascular diseases are among the most severe tree issues in Franklin. If not handled on time, some strains can kill the fully grown and mature trees in a matter of weeks. That’s pretty soon, and you could be wondering how it’s so.

The vascular system is responsible for transporting water and nutrients to all parts of the tree. Therefore, anything affecting the flow can kill the tree within a short time. However, you can prevent this by identifying the signs early in time and finding an amicable solution.

Defoliators harm trees by feeding on their leaves. This prevents trees from making their food and eventually ends up dying due to a lack of nutrients. Besides, the extent of damage depends on the number of defoliating insects leading the attack.

In extreme cases, the insects can destroy host trees in a couple of weeks. So, it’s best to deal with the situation once you notice an invasion of defoliators. Plus, it’s always better to mitigate the spread of these insects from one tree to another.

Moreover, they cause thinning of crowns, holes in leaves, and the absence of foliage. These are the signs to look out for and take quick action. Some examples of defoliator insects are pine webworms, Gypsy Moth, Bagworms, Cankerworms, and Pine Sawflies.

These insects bore through the bark of trees for several reasons. Some do it for food, others do it for shelter, while others bore trees to create an environment for reproduction. Whatever the reason, bark borer beetles are destructive and can kill trees when the infestation is severe.

Bark borer beetles create tiny holes in the bark of trees. So, this is what you need to look for if you want to deal with the situation before it escalates. Some examples of bark borers in Franklin town are IPS beetles, black turpentine beetles, and southern pine beetles.

Wood borers operate in the same way but with a slight difference. These insects attack the wood of dead trees by boring holes in them. Besides, others attack dying trees and green logs, eventually causing lumber degradation.

These insects mostly attack seedlings and twigs of young trees. Besides, they’re destructive and kill trees in no time by going after the juicy and succulent parts.

A quick way to identify these insects is by looking for the deformation of leaves, seedlings, twigs, and buds. Some examples of these insects are twig girdlers, tip moths, Pales weevils, and Pine weevils.

These insects pierce through soft parts of the tree and suck out the juice. Besides, they compete with the tree for nutrients such as carbohydrates which are needed for healthy growth. Severe infestation can kill the affected trees in a little over a few weeks.

These sucking insects are tiny, so it can be a hassle to spot them. However, a sure way of knowing about their presence is using a magnifying lens. Besides, other symptoms like defoliation and deteriorating tree health are often good indicators.

Scales, Aphids, Gall Makers, and Hemlock and Balsam woolly adelgid are some of the sucking insects in Franklin.

Does the City of Franklin Provide Any Assistance in Tree Removal Problems?

According to the town’s regulations in the Town of Franklin, North Carolina: Code of Ordinances, the management of trees in public spaces is a responsibility of the town. So, does the town of Franklin provide any assistance in tree removal problems? The answer is yes and no.

Who Is Responsible for Fallen Tree Removal in Franklin?

Tree removal can be a tussle, especially when several parties are involved. Justin M. Lewis of Ward and Smith, P.A attorneys, says, “The law of fallen trees in North Carolina is based largely on the legal theory of negligence.  According to principles of negligence, the owner of the property from which the fallen tree originated will be liable only if the owner knew that the tree was hazardous or such hazard was obvious.”

If you’re the homeowner, you’re responsible, but your home insurance provider will likely help out with the cost.

If you’re a renter, your landlord or management agency should be responsible.

If you’re the landlord, you’re responsible for removal, but your home insurance provider might help out with the cost.

If you’re a neighbor, your home insurance provider should help with the cost whether you’re a landlord or owner occupant.

How Does the Soil Affect Trees in Franklin?

According to the Soil Survey of Franklin County, North Carolina, the soil is rich and supports various tree species. Some examples include oak pine, loblolly shortleaf, oak-hickory, and oak gum cypress.

Weather conditions vary in Franklin town from time to time. Therefore, it’s normal to experience snowfalls during winter. When in excess, the snow can harm tree leaves and branches. Also, there’s ample rainfall and moderate temperatures that provide enough water and warmth for healthy tree growth.

What If Dead Trees Are Near Power Lines in Franklin?

Dead trees near power lines pose a risk to humans if they fall. Thus, the noble thing to do is contact our arborists or the town authorities to remove the trees as an emergency service.

How Much Does Tree Removal Usually Cost in Franklin?

According to our records, it’ll cost you an average of $740 to remove dead or dying trees in Franklin, NC. However, this depends on tree status, access, and your preferred removal company. The total can range between $150 and $1,900 or more based on the below factors.

Younger trees are smaller and cost less to remove than old huge-sized trees.

Trees that are closer to power lines, your home, fences, sheds, or other personal property pose more of a risk and will cost more to remove.

Recent Requests We Received From Customers In Franklin, NC

Trees along road need to be taken down. On a hill and close to power lines.

Have A very large oak Tree on my property needing trimming or removal.

1 large tree removed that is close to the house.