Looking for affordable tree removal service in Coon Rapids, MN? Great! TreeTriage is at your service 24/7. 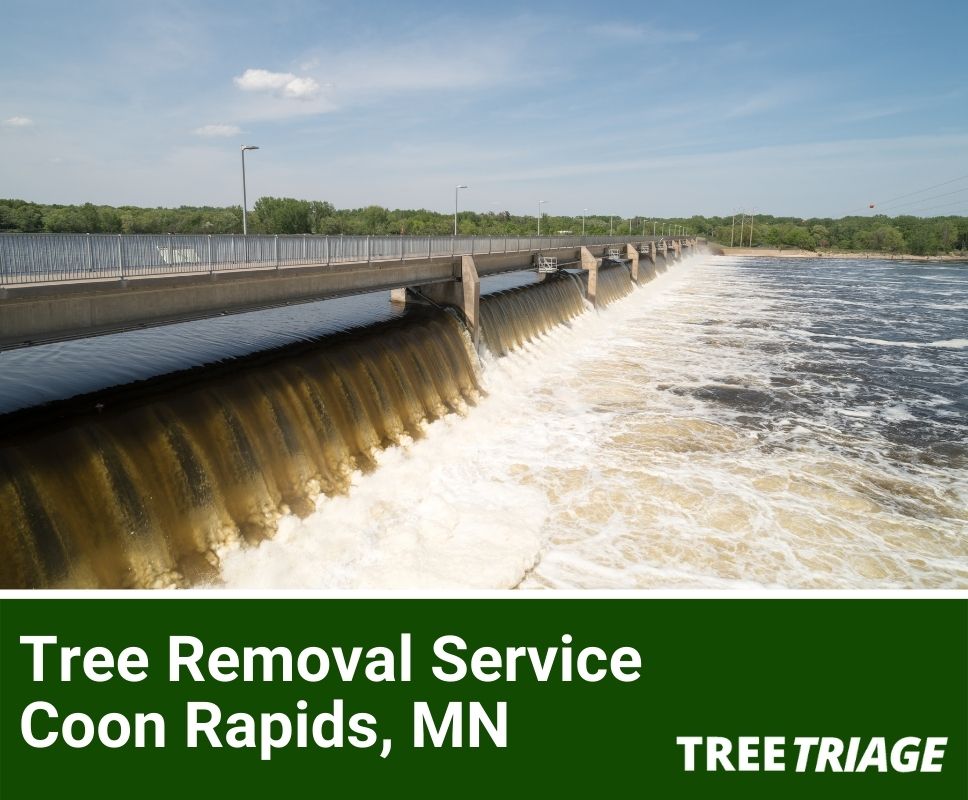 Tell us about your project in the form and we'll get you connected with specialists in or continue reading to learn what you should consider when removing a tree in Coon Rapids.

What Are the Most Common Tree Issues in Coon Rapids?

Two tree diseases, in particular, Dutch elm disease and oak wilt disease, are of significant importance to Coon Rapids as they are commonly fatal to their host trees. As such the city has declared its intention to control and prevent the spread of these diseases as well as other potentially threatening diseases which may affect our local shade trees. With this in mind, the position of city forester was created. It is their job to work closely with the city manager to control and prevent these, and other epidemic diseases which may occur in our shade trees.

Dutch elm shows itself by yellowing, browning, and/or wilting the leaves in any variety of elm. The disease is caused by a fungus that blocks the tree’s water-conducting tissues. The fungus is carried from one tree to the next by the elm bark beetle. The majority of infected elm trees die from the disease.

Another fungal disease, oak wilt, kills large numbers of oak trees every year. Sap beetles carry the disease from one oak to the next. Infected trees will have discolored leaves that may curl, or wilt and eventually drop off prematurely. The tree crown dies off leading to the eventual death of the entire tree.

Any tree found to be infected with either disease or the beetle carriers will be declared a public nuisance by Coon Rapids. Property owners with infected trees must have them cut down with all parts removed and burned including branches, trunks, brush, and stumps. At Tree Triage, our professional tree removal specialists are well aware of the proper removal and burning of infected trees.

The city’s forester performs an annual inspection of public and private land. They also respond to any reports of Dutch elm, oak wilt, or the beetles that carry the diseases and will visit the site for an inspection. If the beetles or disease is found, they will direct the property owner to destroy and remove the tree.

Yet another type of fungus, diplodia sapinea, affects several species of pine trees causing dead branch tips leading to entire branch death, and a decline in growth of the tree. It severely affects seedlings and can cause sudden death in a young tree. The fungus itself can survive on dead needles, branches, and cones for more than five years.

The emerald ash borer (EAB) is an invasive insect native to Asia. EAB infests and kills weakened and healthy trees alike with all species of ash susceptible to it. In North America, the first findings of EAB were in Michigan in 2002. Since the extreme temperatures of northern areas of Minnesota slow the spread of EAB, areas in the central part of the state and southward including Coon Rapids are at higher risk.

Early EAB can often be spotted due to an enormous amount of woodpecker holes in the trunk of a tree, as the birds feed upon EAB larvae. An infected tree can also become lighter in color due to woodpeckers removing the outer bark. Additional signs include yellowing of the leaves and canopy loss. According to the Minnesota Department of Natural Resources, Minnesota has lost approximately one billion ash trees to EAB in recent years. Coon Rapids residents who suspect an EAB infestation should report it to the city as well as Arrest the Pest at 1-888-545-6684.

The white pine weevil is native to North American and infects more than 20 species of pine with the eastern white pine and jack pine being the most vulnerable. These pests generally prey upon smaller, younger trees making new growth wilt and droop. Needles become lighter in color and eventually drop off. Infested trees can be stunted for two to four years following an infestation. The damage will not only affect the growth of the tree but deform the stems and leave the tree more open to wood decay.

Does the City of Coon Rapids Provide Any Assistance in Tree Removal Problems?

Coon Rapids’ Forestry Division protects city shade trees. While they do not offer any specific assistance for homeowner tree removal, the forestry staff is available to answer questions. The functions of the department include:

As part of the city’s forestry education, each year, the city celebrates National Arbor Day on the last Friday in April. Included as a part of the festivities, residents can choose from a selection of bare-root trees for preorder through the Forestry Division for a nominal fee.

Who Is Responsible For Fallen Tree Removal in Coon Rapids?

With the city’s forester on board, Coon Rapids forestry staff works hard to protect all trees in the city. While the department is responsible for the care and management of public trees and will inspect private trees as needed for infectious fatal diseases, it cannot assist with the removal of a private fallen tree. However, the forestry department is available to provide tree removal information to its residents.

A homeowner is responsible for removing a fallen tree from his or her property. A professional tree removal service like Tree Triage can ascertain the reason for the tree’s death and what measures need to be taken for proper removal. The city should be notified if the tree was infected with Dutch elm or oak wilt.

A renter does not have any responsibility when it comes to a sick or fallen tree other than notifying the property owner about the tree.

As the property owner, a landlord is responsible for any trees on their property. He or she should arrange for the removal of a fallen tree as soon as possible and notify the tenants in advance of the date and time of removal.

If your neighbor’s tree falls onto your property, it is your neighbor’s responsibility to have it removed. You should discuss the situation with the neighbor and he or she should arrange to have a professional tree service like Tree Triage remove it at a convenient time for both of you.

How Does the Soil Affect Trees in Coon Rapids?

The county of Anoka has a variety of soil mixes from sandy to loamy. The soil is generally beneficial for trees growing in the area. To learn just what your Coon Rapids soil is like, you can send a soil sample to the University of Minnesota for analysis. For more information, visit the Soil Testing Laboratory website.

In Coon Rapids, we are accustomed to the temperatures dropping well below freezing and closing in on zero during the winter. Our trees are used to this too. But an early frost can cause some damage to younger and newly planted trees. Frost damage can affect new sprouts and leaves or needles, turning them brown. However, the damage is rarely extensive and is mainly aesthetic, although it can slow down growth. Rarely will frost damage kill a tree even in the most extreme temperatures.

What If Dead Trees Are Near Power Lines in Coon Rapids?

Together, trees and power lines are a problem. Whether a living tree is growing around the lines or a dead tree is resting near to them, the situation needs to be taken care of swiftly. In the case of a tree connecting with live power lines, especially when it is raining, snowing, or following a storm, call 911 immediately.

If you spot a tree growing around power lines or a dead tree near power lines that does not pose an immediate threat, Minnesota Power asks you to call them as soon as possible at 1-800-228-4966. Once notified, an inspector will come out to assess the situation. While Minnesota Power may remove branches, it is up to the tree owner to clean up any remaining debris.

How Much Does Tree Removal Usually Cost in Coon Rapids?

A common tree removal job in Coon Rapids will range between $250 and $2,100 and average around $640. But there are a lot of elements that can affect the pricing including the tree location, the difficulty of the job, and how long it takes.

You can probably guess that a larger tree will cost more to cut down than a smaller one. It is more time-consuming not only in cutting it down but in removing it as well. So, while a 10-15-foot tree may cost $250 to cut down and remove, a 60-70-foot tree is going to cost a lot more. In addition to longer hours for our crew, a taller tree may require additional equipment, such as a bucket truck, to aid in cutting it down.

Difficulty of the Job

A few things can affect how difficult a tree removal job will be. Consideration needs to be given as to whether the tree is alive, ill, or dead. It is easier and safer to remove a live healthy tree than one that is diseased or dead and therefore more fragile.

Consideration must also be given to tree location. A tree that is close to the house, garage, other trees, or power lines will take more time with the roping down of each branch as it is cut to avoid hitting the power lines, house, or other trees.

Our tree removal specialists in the Coon Rapids area usually don’t include stump grinding in their initial fee. Some homeowners like to leave the stump to save money, while others want it removed. Stump removal will cost an additional $300, on average.

Recent Requests We Received From Customers In Coon Rapids, MN

Need a crab apple tree in front yard trimmed. I would like to thin out and bring sides in.

Looking at shoreline cleanup Taking down a couple trees.