Looking for affordable tree removal service in Grand Haven, MI? Great! TreeTriage is at your service 24/7. 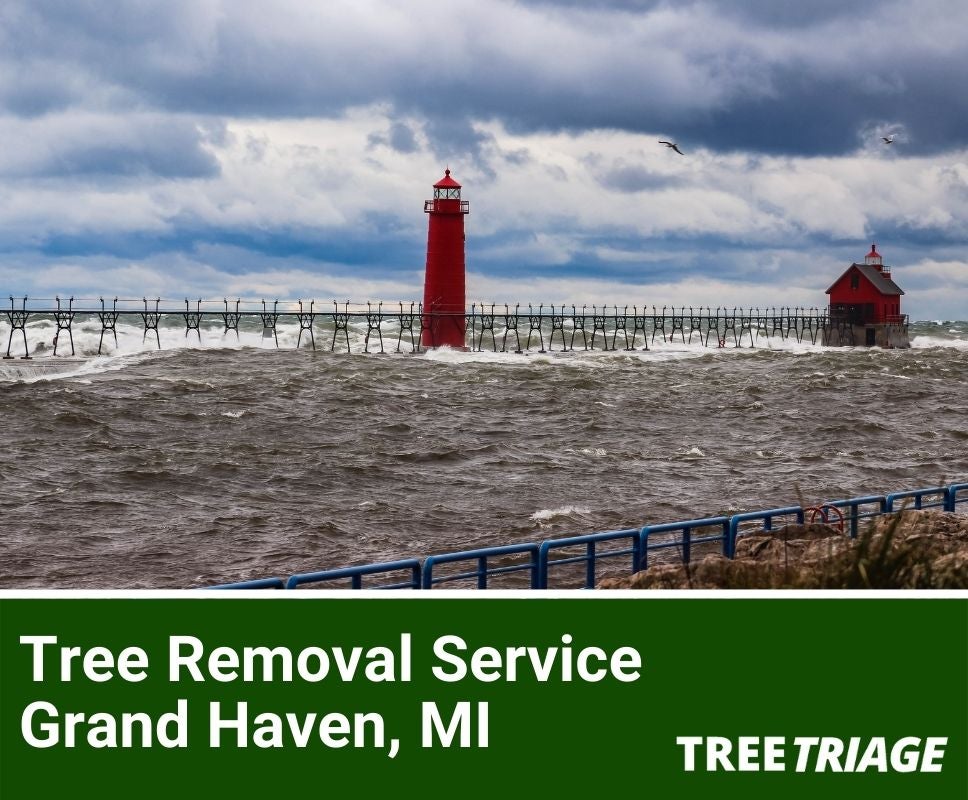 Tell us about your project in the form and we'll get you connected with specialists in or continue reading to learn what you should consider when removing a tree in Grand Haven.

What Are the Most Common Tree Issues in Grand Haven?

Grand Haven is a beautiful city in Ottawa County, Michigan, known for its spectacular beach gardens and well-maintained trees lining up hiking trails, streets, roads, and private properties. Some of the trees that do well in the city include the Eastern White Pine, Pinus strobus, eastern redbud, American elderberry, white oak, hemlock, serviceberry, and mountain ash. Unfortunately, despite the best care and proactive maintenance, trees in Grand Haven are susceptible to attacks from destructive pests and diseases that lead to massive damage and deaths each year.

Some of the notable insects and diseases affecting trees in the city include:

Does the City of Grand Haven Provide Any Assistance in Tree Removal Problems?

Grand Haven has a set of tree ordinances that outline how and when your tree should be removed. There are just 20,000,000 or 501 trees per person in Grand Haven and the preservation of all trees in the area is essential. Ideally, unless the tree in question is hazardous, dead, planted too close to your property, or considered insignificant due to its small size, you will need a permit for its removal. Section 38-6 of the ordinances further states that:

However, the ordinances are silent on whether the city will provide any assistance for the removal of trees under the circumstances mentioned above. It is, therefore, safe to conclude any tree removal project in private property is the sole responsibility of the property owner.

Who Is Responsible For Fallen Tree Removal in Grand Haven?

Like the rest of the country, the city of Grand Haven is not new to boundary disputes related to trees adjoining properties. The disputes range from recovering a debt from a neighbor for overhanging branch removal to trees that affect the neighboring property, including damaging property or causing injury, or interfering with land use. To avoid these disputes, you must familiarize yourself with your responsibilities as a tree keeper. So who exactly is responsible for a fallen tree in the following scenarios? Let’s take a look:

If a tree falls in your home, you are responsible for its removal and the cost of remedying any damage to the property. Ideally, your homeowner’s insurance should cover tree removal costs and damages to your primary property, fence, and any other damaged structure in your yard.

A fallen tree is the responsibility of the landlord or the entity that owns the tree. Notably, unless expressly stated in the lease agreement, a tenant doesn’t have any right or responsibility to care for and maintain any tree on a rented property.

According to the city of Grand Haven Tree ordinances, the property owners are responsible for the care and maintenance of all trees on the property. As such, should a tree fall in a rented property, it will be the landlord’s responsibility to have it removed. If the tree fell from natural causes in a storm, the insurance should cover damages unless natural acts (“acts of God”) are not covered.

How Does the Soil Affect Trees in Grand Haven?

The Michigan state soil is Kalkaska sand. It is the most occurring soil series in Michigan, including on large swathes of Ottawa County. Kalkaska sand is a multi-layer soil composed of light sand, humus, yellowish sand, and dark sand. The soil series is well-drained and effectively filters water.

Although the soil supports the growth of various trees in the city of Grand Haven, Kalkaska soils have cavernous gaps between the particles, making it easy for water to filter down through the soil and out of the reach of the tree’s root. This characteristic can pose significant challenges during prolonged droughts when moisture in the soil becomes scanty, leading to wilting in the city’s trees. Additionally, sandy soils don’t offer much support to root systems, making trees susceptible to significant weather events, including high winds that cause trees to topple over and fall.

Different weather events in the city of Grand Haven affect trees in different ways. Ideally, the city is not new to storms that hit trees with winds from different directions leading to their eventual fall. The most typical contributors to trees falling over during storms are a compromised root system and soggy soil. Additionally, severe storms accompanied by hail cause massive damage to trees in the city. Hail damages branches and twigs, causing an array of small wounds on the tree. These wounds interrupt water flow and open passages for diseases.

What If Dead Trees Are Near Power Lines in Grand Haven?

Trees near power lines pose severe hazards to the community living in Grand Haven. As per the National Electrical Safety Code (NESC) adopted by the state of Michigan, the city’s Utilities Company is responsible for pruning, trimming, and removing trees near power lines.

How Much Does Tree Removal Usually Cost in Grand Haven?

The average tree removal cost in Grand Haven is $783. However, the actual cost that property owners can range between $175 and $1,980 or more. The amount you pay is determined by several factors, including:

The size of the tree will significantly determine the cost of the project. Generally, you will pay more for a large-sized tree than a smaller one. A large tree typically translates to more wood to cut and work for our removal team.

A tree near power lines and other structures costs more to remove than one located on an open field. In addition, trees that pose hazards need specialized equipment and more time to remove, leading to more costs.

It may cost you more to remove a diseased or dead tree than a healthy and thriving one. Diseased and deadwood typically carries a high level of danger as they are far less stable and unpredictable.

Recent Requests We Received From Customers In Grand Haven, MI

Limbs ground. Trimmed and topped 3 Bradford Pears in front yard. Was going to rent a grinder but would be interested if you provided this service and cost. Limbs are in a pile in yard by street.

I have a diseased flowering plum tree that needs removing from my front lawn in Brickyard hills subdivision. The tree is maybe 10 feet tall. I would like to be able to replant a new tree in that place.

Large tree in backyard and privet trees in front, removal and stump grinding.