Looking for affordable tree removal service in Davison, MI? Great! TreeTriage is at your service 24/7. 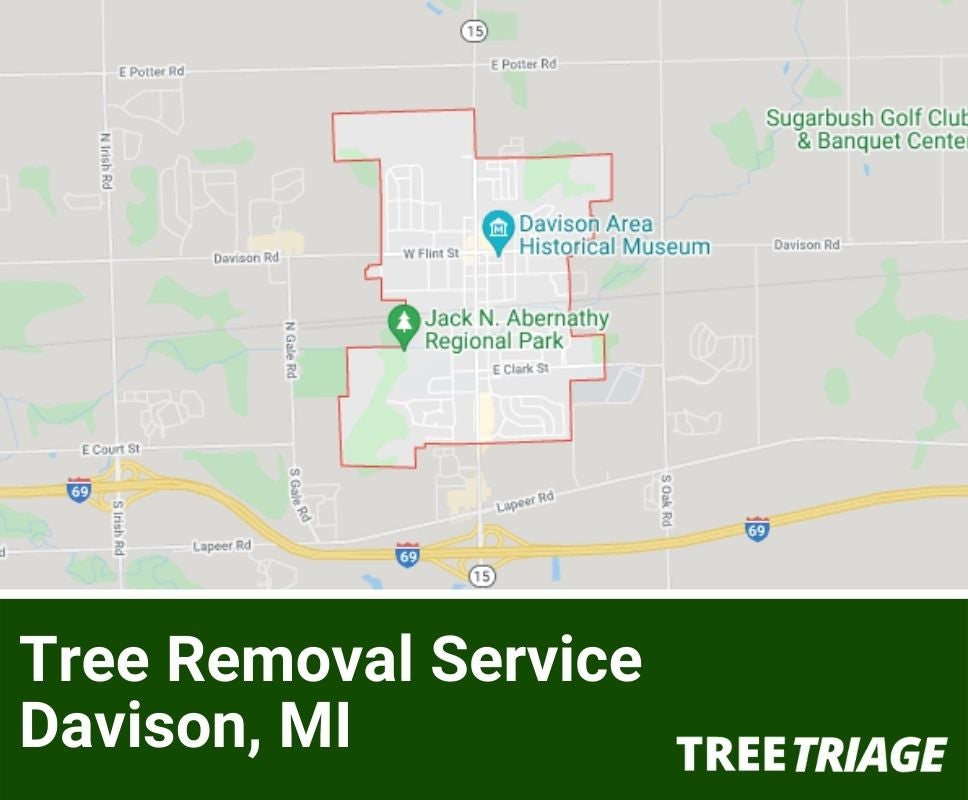 Tell us about your project in the form and we'll get you connected with specialists in or continue reading to learn what you should consider when removing a tree in Davison.

What Are the Most Common Tree Issues in Davison?

The European gypsy moth is one of the most common pests in Michigan. Although the adult moths are somewhat less of a problem, their caterpillars frequently defoliate more than 300 species of trees. Defoliation in and of itself usually does not automatically kill trees, but it leaves them more vulnerable to secondary problems. Much like a wound that is left uncovered is more likely to become infected, trees that lose a significant portion of their leaves to hungry caterpillars are more likely to become diseased or invaded by other pests.

This moth is a widespread problem in Michigan and several other states because the caterpillars do not choose specific species of trees to feed on, which puts all trees in the state at risk. Although European gypsy moths can infest any species of tree, some of the most common in Michigan include aspens, cedars, birches, cottonwoods, oaks, willows, and poplars. Visible caterpillars, egg masses, or damaged leaves that may be connected to this moth should be reported to local agriculture officials who may be able to lessen the impact of the problem by installing special insect traps on your trees and property.

Beech bark disease, also known as BBD, is caused by a type of insect called the beech scale and a type of fungus called the Neonectria fungus. The insects infest Michigan’s beech trees and feed on the sap of the trees. Once the infestation makes the sap easily accessible, which leaves the tree vulnerable to the fungus, the fungus is then able to block the sap flow and kill the wood. Infected trees may become covered with a type of white wool material. Most trees with the disease will eventually die, but they may lose branches during storms (before completely dying) because they are weakened and more susceptible to damage.

Oak wilt is a type of fungal disease that affects red and white oaks. Although both species can experience oak wilt, red oaks are much more susceptible to serious damage and more likely to be killed by the fungus than white oaks. Oak wilt can spread on its own through roots that touch other trees or beetles or other pests that carry it from tree to tree, especially just after a tree has been pruned, but moving the trees or their wood is a more common culprit. For this reason, oak trees should not be pruned during their growing season to prevent the disease from spreading.

Boxwood blight is a type of fungal disease that primarily affects Michigan’s boxwood trees as well as a select few other species. This disease defoliates leaves and causes black lesions on stems and sticky spores on the trees. Like many tree problems, it is typically spread by moving infected trees. Boxwood blight can often be prevented by using fungicides, but there is currently no treatment. It can be found both in nature and in nurseries, and most tree nurseries in Michigan are currently taking steps to prevent this relatively new problem from spreading among young trees. Because this disease has only been found in Michigan since 2018, its full potential effects on trees in the state are not yet known.

Does the City of Davison Provide Any Assistance in Tree Removal Problems?

The City of Davison does not offer tree removal assistance. However, it does state that residents may obtain a permit to take downed trees from city parks to use for themselves. This program helps the city keep wood from fallen trees in the area, which allows it to be useful without increasing the risk of spreading diseases or hungry pests to other parts of the state.

Who Is Responsible for Fallen Tree Removal in Davison?

Until recently, Michigan aligned with most other states in placing responsibility for removing trees that fall during a storm on the owner of the property where the tree lands. A bill was introduced in the fall of 2019 that considered changing this responsibility to the owner of the tree. This proposition, which would be known as the Tree Owner Liability Act, would hold owners of trees responsible for any damage they cause. Although this bill does not appear to have passed yet, this policy has the potential to change in the near future.

At this time, homeowners are responsible for trees that fall in their yard unless the damage is caused by negligence. This may change in the near future.

Renters are not responsible for removing fallen trees, but they should have their landlord arrange to have them removed within a reasonable amount of time following a storm.

Landlords are currently responsible for removing trees that fall on their property unless the problem was the result of negligence.

At this time, you are only responsible for a tree that falls in a neighbor’s yard if the problem was your fault. However, you may become liable for any tree that falls from your property in the future.

How Does the Soil Affect Trees in Davison?

The Davison area consists mainly of alfisol soil. These are moderately-leached soils that provide a favorable environment for tree growth. Unlike many other types of soil, they do not frequently drain water and nutrients too quickly for trees to absorb them properly or leave roots sitting in waterlogged soil.

The Davison area, as well as much of central Michigan, experiences relatively common tornados during the summer. Although this frequency is not quite as extreme as the tornado levels found throughout southern parts of the Midwest in the area known as Tornado Alley, tornados are one of the most significant weather-related threats to trees in the Davison area.

Although not all tornados create a significant threat to humans or are likely to cause serious property damage, nearly all tornados can harm trees. The strong winds associated with tornados are nearly always capable of damaging trees by blowing off leaves and breaking branches or knocking over young trees that have recently been planted and have not yet had time to establish firm roots. Because many young trees are planted in the spring, they still tend to be quite vulnerable when tornados begin to form in the area a few months later. More serious tornados can break off larger branches and uproot larger trees, which can cause more serious damage to homes, vehicles, power lines, and other items they may land on.

Large, fallen trees can require costly removal or repairs, which means that it is important for residents of Davison (and other areas that are prone to tornados) to have adequate homeowners insurance to cover unexpected damage and removal needs, even if you do not personally own trees.

Although most tree species that are native to the central Michigan area are able to handle average cold winters, severe ice storms can cause damage to almost any tree. The area experienced an ice storm in December 2013 that left up to an inch of ice coating most of the trees in Davison, Flint, Lansing, and several other cities.

Hundreds of thousands of trees throughout this region experienced ice damage, such as split limbs, broken off limbs, and high crown breakage. High crown damage, which was the most common type of damage to Michigan’s trees during this ice storm, involves damage to the areas where branches connect to trees, preventing new branches from forming properly in areas that were broken. Many of the branches that grew throughout this area shortly after the ice storm were weak and poorly formed, which made them more susceptible to being broken off the tree than other branches during storms in the months and years that followed.

Although some trees that experience ice damage can be saved, this largely depends on the extent of the damage and where the tree is likely to land if it falls in the future. Minor damage can often be mitigated with proper pruning, while a severely damaged tree may need to be removed if it is likely to land on a home or other object. If you are not sure, contact us to have our arborists inspect your tree and its surrounding area to determine the best course of action.

What if Dead Trees Are Near Power Lines in Davison?

In Michigan, trees that are located or growing near power lines are the responsibility of DTE Energy. Untrained individuals should not attempt to prune or remove dead trees that are located too close to power lines. Instead, report the problem to DTE or your local electric company for assistance. Taking the time to have these problems taken care of by an electrical professional can help you avoid putting yourself in additional danger.

How Much Does Tree Removal Usually Cost in Davison?

Tree removal in Davison usually costs between $210 and $1,860, with an average price of $691. These estimates cover labor and cleanup costs as well as any special equipment that may be needed to remove your tree. If your tree removal requires a permit, this will typically be an additional fee.

Trees that are close to buildings, power lines, or other obstacles often take more time to move because they may need to be cut into manageable pieces to safely remove, rather than simply chopped down.

Trees that are diseased or in poor condition may be more difficult to safely remove than healthy trees because they are often weak or unstable and present danger to our crew.

Large trees typically need more manpower to remove than small trees, and they may also require the use of a crane or other extra equipment.

Recent Requests We Received From Customers In Davison, MI

We're going to want some trees trimmed and stumps ground down. Also, our neighbor needs help, too. We're on Worth Road off M-15 south of the river. Have you worked for us before?

I have several that I need removed. I might have to do them individually depending on the cost. They are in my back yard, but you can easily drive back there. Looking for a price.

I have a tree I need thinned out so we can get more sun in the backyard and still have privacy.