Looking for affordable tree removal service in Pembroke, MA? Great! TreeTriage is at your service 24/7. 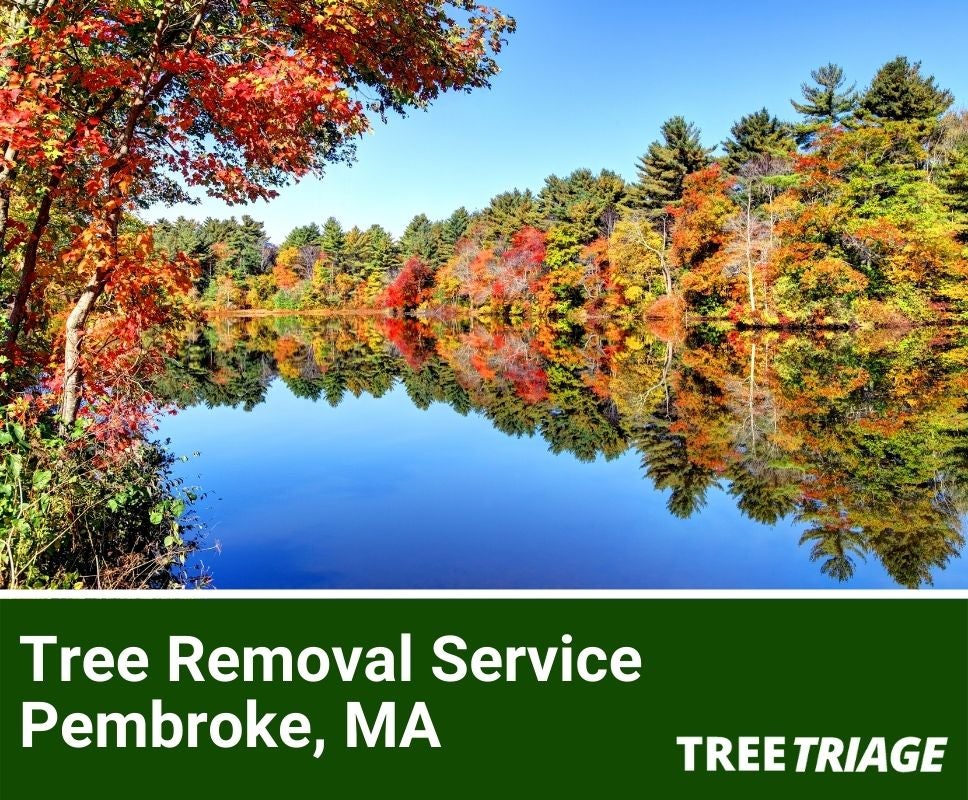 Tell us about your project in the form and we'll get you connected with specialists in or continue reading to learn what you should consider when removing a tree in Pembroke.

What Are the Most Common Tree Issues in Pembroke?

There are several native and invasive insects and diseases that can create issues for trees in Pembroke. While some tree issues in Pembroke are merely aesthetic, others can not only undermine its beauty but also damage the tree’s structural stability and cause death.

Beech leaf disease is a recently discovered disease believed to be caused by a foliar nematode species. The condition was first identified in Ohio in 2012 and has since spread across the northeastern United States, including Massachusetts. In June of 2020, officials detected beech leaf disease in Plymouth, Massachusetts, just 16 miles from Pembroke.

Damage occurs as the nematode feeds inside the leaves and damages them. Eventually, the disease spreads to the tree buds, leaving them unable to produce new leaves. The symptoms begin as a dark green banding pattern on the lower canopy, which ultimately spreads throughout the tree and causes death. The disease affects American beech, European beech, and Oriental beech trees of all ages, but young trees and saplings are the most vulnerable. Young trees can die in as little as five years from the initial infection, and the disease proves fatal to 90% of beech saplings.

In the caterpillar stage, the gypsy moth is a significant threat to the foliage of a tree. One caterpillar can eat up to one square foot of leaves in a single day, and a severe infestation can strip a tree of every leaf in just a few days. The gypsy moth will attack nearly any tree but prefers oak, elm, maple, and other hardwoods, which can rarely survive repeated infestations.

The female beetles lay their eggs in the bark crevices of ash trees, and when hatched, the larvae feed on the tissue under the bark for up to two years before emerging as an adult. As the larvae feed, they create tunnels that interfere with the tree’s ability to transport water and nutrients. As damage accumulates, the canopy will thin, and branches begin to die. Trees typically die within three years of showing visible symptoms, making the emerald ash borer a significant threat to all ash trees in Pembroke.

Does the City of Pembroke Provide Any Assistance in Tree Removal Problems?

The Pembroke Department of Public Works, Tree Division is responsible for maintaining and addressing tree issues on public property. While the city does not provide any direct assistance to residents to remove trees from private property, the division does have the means to address trees deemed to be a nuisance.

Additionally, National Grid, the power distributor in Pembroke, is responsible for tree maintenance near their distribution lines. The utility regularly inspects trees on its property and adjoining properties for trees that could damage power transmission lines. If the utility finds a tree on private property that is a danger, they have the right to ask for permission to trim or remove the tree at their expense.

Who Is Responsible For Fallen Tree Removal in Pembroke?

As a homeowner in Pembroke, you bear the sole responsibility of maintaining your trees and the cost of removing a fallen tree from your property. Often, trees grow near a fence or property line, confusing the issue of who owns the tree, but if a tree or large branch falls on your property, you will be tasked with the removal. Many homeowner insurance policies provide coverage for tree removal, enabling you to recover part or all of the removal costs.

If you are a landlord in Pembroke, you are responsible for maintaining your property, including removing fallen trees. Landlords have a unique position in that they are required to ensure that their property is free of nuisances or hazardous conditions that could potentially harm tenants or visitors. Your liability makes it vital for you to regularly inspect your tree’s health for signs of disease, pest infestation, or other issues that could lead to a potentially dangerous situation. While landlords are not typically responsible for damage to a tenant’s property, if a landlord or property owner is found to have been negligent, they may be held liable.

If you are a neighbor and a tree or large branch falls on your property, you are responsible for the removal. This general rule holds whether the fallen tree originated from neighboring private or public property with few exceptions. Your insurance will often cover at least a portion of the removal cost and cover any property damage loss you incur. While the cost of removing a tree is typically on the landowner where the tree lies, sometimes, if the tree was known to be a nuisance, your neighbor could be held liable.

How Does the Soil Affect Trees in Pembroke?

The soil in Pembroke is a well-draining loamy soil that is ideal for a wide range of plants and trees. Loamy soil is a mix of nearly equal parts sand and silt, with a slight amount of clay. The result is nutrient-rich soil that drains well while retaining enough moisture to promote the growth of healthy root systems.

The weather in Pembroke can have a significant effect on the health of your tree. Like much of the northeast, winters in Pembroke bring freezing temperatures and the occasional severe winter storm. With an average of 43 inches of snow yearly, winters expose Pembroke trees to sub-zero temperatures, snow, sleet, and hail. Heavy snow and ice combined with high winds have the potential to damage even the healthiest tree.

What if Dead Trees Are Near Power Lines in Pembroke?

One of the biggest causes of power outages in the Pembroke area is tree contact with the power lines. A dead tree or branch near a power line can disrupt power to sections of the community and pose a risk to people in the vicinity of the wire. The transmission and power lines in Pembroke are the responsibility of National Grid. The company is also responsible for removing dead trees near power lines and maintaining trees that could cause a power issue.

How Much Does Tree Removal Usually Cost in Pembroke?

The cost of removing a tree in Pembroke can vary greatly. While a stump removal typically costs less than $200, the average tree service in Pembroke is about $650. Our average tree service usually consists of pruning, trimming, and removing damaged, diseased, or hazardous limbs and branches. The cost of removing a tree can be considerably more, with the final price dependent on several factors.

The health of your tree is one significant cost factor. A tree whose health is compromised requires special precautions to remove it safely. If your tree is dead, dying, or diseased, you can expect the cost of removal to be greater.

The size of your tree is also another consideration that will affect the removal cost. The taller the tree, the greater the risk to our crew members working on it, and often the removal may require added equipment to cut it down safely. Additionally, the increased size of the canopy means more limbs and branches to clear from your property. Added risk, specialized equipment, and additional labor can significantly impact the cost of removing your tree.

The location of the tree is another significant cost factor. Trees growing near power lines, fences, houses, and other structures require a great deal of care to avoid damaging property. Often, removing a tree in a confined area requires specialized machinery and additional personnel to ensure that your property isn’t damaged

Recent Requests We Received From Customers In Pembroke, MA

We have about 12 trees, oak and pine, small that we would like removed from the back of our property in order to open up the yard somewhat.

Looking to have a medium size tree removed and other tress stump removed. Grind for both. Thanks!

I'm looking to get an estimate to remove three trees at my home.

Cut down a dead spruce, grinding of the brush and stump.