Looking for affordable tree removal service in Mashpee, MA? Great! TreeTriage is at your service 24/7. 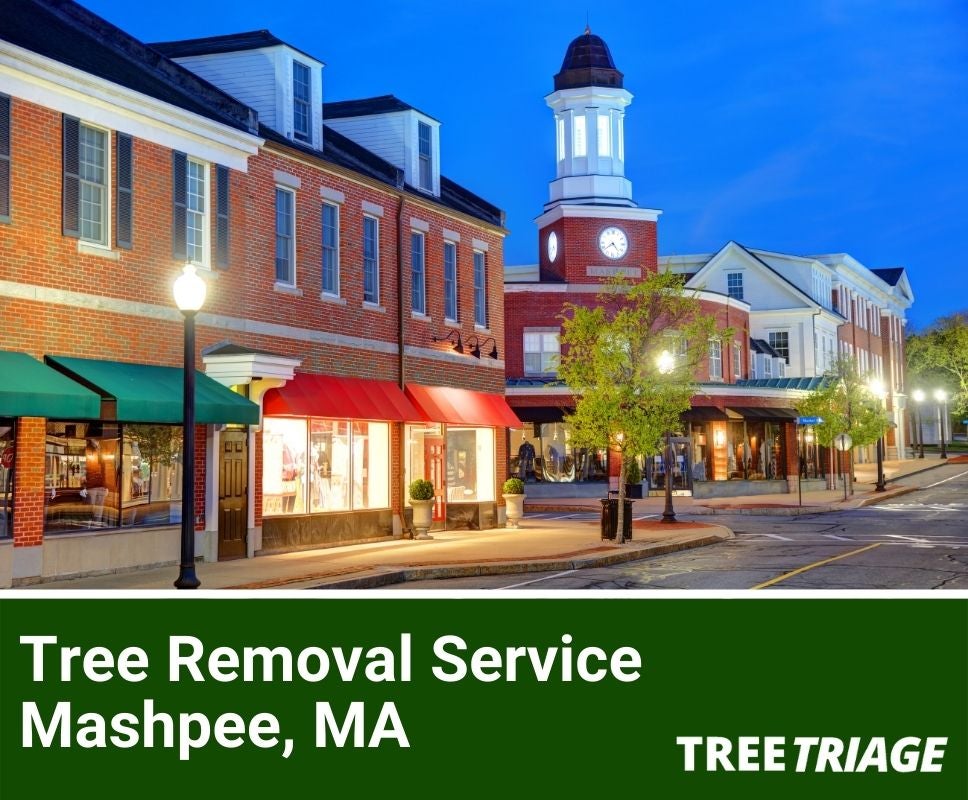 Tell us about your project in the form and we'll get you connected with specialists in or continue reading to learn what you should consider when removing a tree in Mashpee.

What Are the Most Common Tree Issues in Mashpee?

The Asian longhorned beetle is a type of insect that has become a significant threat to the health of hardwood trees in Massachusetts, Ohio, and New York in recent years. This beetle chews pencil-sized holes in the bark of various hardwood tree species in the Mashpee area, such as elm, ash, birch, willow, mimosa, poplar, and maple trees, and feeding on and laying eggs inside the trees weakens the trees and often kills them. In addition, Asian longhorned beetles often spend the majority of their lives living inside a particular tree, which can severely impact the health of the tree over time.

Insecticides can sometimes be used to prevent Asian longhorned beetle infestations from occurring, which can be an effective method of protecting unaffected trees located in the vicinity of trees that the beetles have been found in. Still, there is currently no known treatment for infested trees. Signs of a possible Asian longhorned beetle infestation can be reported to the USDA Animal and Plant Health Inspection Service online, which can help homeowners learn about the best next steps to take to manage a particular infestation.

As an American problem, the European gypsy moth was first found in Massachusetts, and it has since spread throughout much of New England and the Midwest. Although these European natives tend to do minor damage as adults, their caterpillars frequently eat and defoliate the leaves of approximately 300 species of trees throughout Massachusetts and other affected states, making it easier for other types of hungry pests and diseases to have a more damaging impact on the trees. Although European gypsy moth caterpillars can affect over 300 species of trees, most of that damage primarily focuses on approximately half that many, with aspens, cedars, cottonwoods, birches, oaks, poplars, willows, and various types of fruit trees among the most common targets.

Residents can report signs of European gypsy moths to the Massachusetts Department of Agricultural Resources and avoid moving firewood, Christmas trees, wood chips, and other fresh wood products between counties and especially between states to help keep these moths and their caterpillars from spreading.

The emerald ash borer has been found in Massachusetts, though it is a somewhat less prominent local threat than in many other states. This type of beetle attacks all species of ash trees by feeding on their bark and laying eggs inside the trees, leading to split bark, branch dieback, and other symptoms. In addition, the presence of the emerald ash borer can waken trees and make it difficult for them to absorb enough food and water, which can eventually kill the trees. Because the emerald ash borer is currently less common and somewhat less problematic in Massachusetts than it is in many other states, it is essential for residents of Massachusetts to avoid moving firewood, wood chips, and other wood products to minimize the spread of the beetle and keep its effects less severe.

Beech leaf disease, also known as BLD, was first found in Ohio in 2012 and has since spread to Massachusetts and surrounding states. This fungal disease, first detected in Massachusetts in June 2020, typically results in damaged leaves and can eventually kill trees. Because beech leaf disease is relatively new, information about how it spreads and possible steps for preventing or treating it are relatively limited. This is especially true in Massachusetts, as only being in the area for the past year has given local scientists and arborists little information to work with. However, this disease is likely to reach a level of concern similar to that of many other tree diseases in the area unless it can be stopped from spreading in the near future.

Other hungry pests that have not been extensively reported in Massachusetts but can thrive in the region if they are brought in include Asian gypsy moths, European cherry fruit flies, and spotted lanternflies. Avoid bringing firewood and other wood products into Massachusetts to help prevent new major threats from affecting our local trees.

Does the City of Mashpee Provide Any Assistance in Tree Removal Problems?

The City of Mashpee accepts brush, Christmas trees, and other tree pieces under six feet long at the city’s recycling Transfer Station. Brush larger than six feet long will need to be cut into smaller pieces to be recycled, or it can be brought to Cape Resources in Marstons Mills as is. The city also accepts leaves, grass, and other yard waste and offers home composting bins that residents can use to reuse their yard waste.

Who Is Responsible For Fallen Tree Removal in Mashpee?

In Massachusetts, most trees that fall during a storm are the property owner’s responsibility rather than the owner of the tree. Fortunately, most homeowner’s insurance companies provide adequate coverage for fallen tree removal and any damage associated with fallen trees. However, this responsibility can shift to the tree owner if the tree fell because it was in poor condition, and homeowners also have certain rights when it comes to managing a neighbor’s tree that encroaches onto their property.

Your homeowner’s insurance will typically cover tree removal from your yard, as well as any damage that results from fallen trees or other debris during a storm. However, you will usually not be able to hold a neighbor responsible for removing his or her tree from your yard unless it should have already been removed because of disease or other damage that caused it to fall. Although you cannot deliberately damage a neighbor’s tree, you may prune branches or trim roots that reach into your yard and could cause damage to your property.

Renters are not responsible for tree removal unless their lease specifies otherwise.

Landlords generally follow the same guidelines as homeowners when it comes to determining tree removal responsibility.

You are typically not considered to be at fault if an otherwise healthy tree falls into a neighbor’s yard during a storm, as this situation usually cannot be prevented. However, diseased trees, damaged by hungry pests or otherwise weakened, are more likely to fall during storms and can even fall for no reason other than their damage, which you are likely to be held liable for. Your neighbor may also cut branches or roots that reach into his or her yard, although they cannot damage any other part of your tree, and fruit that falls into their yard will become theirs. This means that paying attention to the condition of your trees and taking care of potential problems before they cause damage is a must.

How Does the Soil Affect Trees in Mashpee?

Much of Mashpee’s Cape Cod region consists of sand, gravel, and clay, with less soil conducive to plant and tree growth than other parts of Massachusetts. These materials result from glaciers once present in the region, which deposited them over the area’s native prevalent granite and gneiss. However, the area does have a high proportion of Mesic Entisoils and some areas of sandy and loamy soils. Loam soils are typically well-balanced and provide the best basis for plant and tree growth, while sandy soils are too thin to create adequate conditions for many species of trees and often result in too much drainage and too little water retention. However, certain species that thrive on excess water tend to find ideal conditions near the region’s many bogs, marshes, and swamps.

Like many coastal areas, Mashpee and the rest of Cape Cod are prone to flooding. Although flooding tends to be less likely to immediately kill trees than lightning, hurricanes, or other weather issues that affect trees in other parts of the country, frequent flooding can weaken trees over time. This can leave them more likely to be damaged by other types of severe weather, as well as diseases or hungry pests. Flooding can also cause leaves to turn yellow or fall off and bend or break thin branches and very young, thin trees. Frequent flooding can also affect the quality and level of nutrients in Mashpee’s soil over time. In addition, large amounts of water can cause erosion and changes in oxygen and carbon dioxide levels.

What if Dead Trees Are Near Power Lines in Mashpee?

Eversource handles the majority of work on trees that are near power lines in the Mashpee area. This includes trimming branches back to a distance of at least two feet from power lines and removing dead or otherwise hazardous trees within eight feet of a power line, especially those larger than sixteen inches in diameter. Eversource also provides guidelines surrounding who is responsible for the cost of removing these trees and what should be done with the wood on a case-by-case basis. Be sure to contact Eversource instead of attempting to remove or prune these trees yourself to avoid possible electrocution or additional damage to your property or nearby trees.

How Much Does Tree Removal Usually Cost in Mashpee?

Tree removal costs in Mashpee usually range from $154 to $1,950, with an average cost of $652. This estimate, which is somewhat higher than the national average, includes labor fees, cleanup costs, and any necessary materials.

Taller and wider trees cost more to remove than shorter and thinner trees because safely doing so is more complicated, takes longer, and may require additional equipment.

Trees that are easy to reach generally cost less to remove than those located close to power lines, buildings, or other obstacles.

Emergency tree removal, such as dealing with a tree that is about to land on your house after a storm, usually costs much more than routine services scheduled well in advance.

Recent Requests We Received From Customers In Mashpee, MA

Stump is about 24 in diameter. Located in front yard close to drive way. I will take care of haul away.

Hello, m looking for a quote to have 2 silver maples taking down and some stumps ground up.

I have a tree in my front yard I want taken down.

I have a tree next to my deck leaning.