Looking for affordable tree removal service in Gardner, MA? Great! TreeTriage is at your service 24/7. 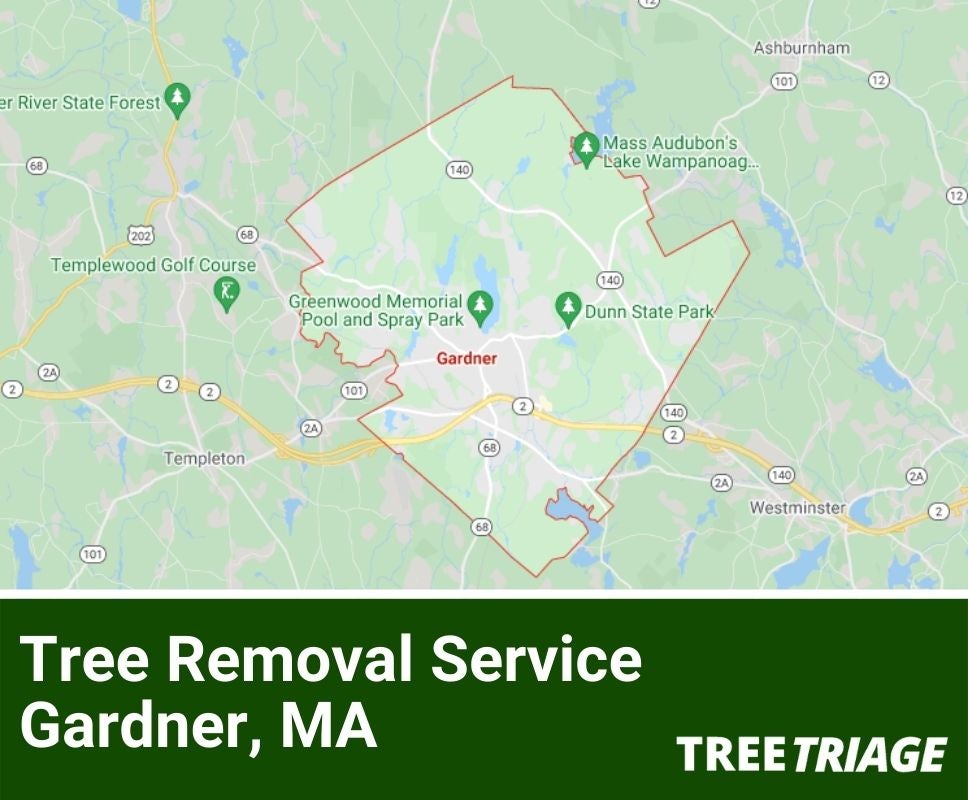 Tell us about your project in the form and we'll get you connected with specialists in or continue reading to learn what you should consider when removing a tree in Gardner.

What Are the Most Common Tree Issues in Gardner?

The state of Massachusetts experiences numerous plant diseases that attack its trees. Some occur most frequently in the north-central area in which Gardner resides. This small city of about 20,000, located in Worcester County, rests between Crystal Lake and Wrights Reservoir, relatively near Cedar Swamp and Tophet Swamp.

A new disease, Beech leaf disease (BLD), first documented in Ohio in 2012, now appears to attack trees in Gardner, too. Worcester County is one of the three counties in MA experiencing this newly documented disease. Arborists first noted BLD in Gardner in 2020 that it resembles foliar nematode species, Litylenchus crenatae. This disease can kill a tree by damaging its leaves, which reduces its vigor and ability to photosynthesize. Because of its newness, arborists do not know how the disease spreads, the length of time for symptoms to develop, or how the disease infects new trees. It affects most beech trees – the American beech, European beech, and Oriental beech – regardless of their age or whether they grow in a forest or urban landscape.

In cooperation with the United States Department of Agriculture, the state launched an eradication program of the Asian Longhorned Beetle (Anoplophora glabripennis, or ALB), an ongoing threat to the state’s hardwood trees. Currently, no cure exists to rid trees of the ALB, so the eradication program relies on early identification to eradicate the beetle. According to the Massachusetts Department of Conservation & Recreation, the ALB could incur more damage to the state’s trees than the combined threats of chestnut blight, Dutch elm disease, and gypsy moths. The state established transportation quarantines to stop arborists and loggers from sharing infested wood outside of already infected locations, including Worcester County. You should call us to inspect each tree within quarantine areas for ALB infestation. We must remove any infested trees and use a woodchipper to destroy them.

Other bugs also plague the trees in Garnder, including the Hemlock Woolly Adelgid (Adelges tsugae), which first entered the state in 1989. It attacks Eastern hemlock trees throughout the state. The government has released two biocontrol species to attempt to limit establishment – Psedudoscymnus tsugae and Laricobius nigrinus. The Southern Pine Beetle (Dendroctonus frontalis), a native beetle, attacks Pitch pine by causing defoliation that devastates the state’s many stands of pines. The Department of Conservation monitors its population density using annual trapping. All species of the area’s ash trees remain under attack by the Emerald Ash Borer (Agrilus planipennis), first introduced to the state in 2012. To thwart the infestations, the state released three biocontrol species – Oobius agrili, Spathius galinae, and Tetrastichus planipennisi.

The plethora of pests that attack Massachusetts’ trees can leave Gardner’s trees barren, but they can often recover from these blights with early detection and quick action. If you notice trees on your property suffering from disease or infestation, please, contact us at Tree Triage for assistance.

Does the City of Gardner Provide Any Assistance in Tree Removal Problems?

Due to its population, MA state law requires The City of Gardner to appoint a licensed and trained arborist as its tree warden, states The Gardner News. This position assists citizens by examining trees in the city and determining when their ill-health requires trimming, cutting, or removal. Before a property owner can cut or trim a tree or have another party do so, they must have the Tree Warden examine the tree. While the Tree Warden or its deputy can remove a tree, if the property owner wants to make changes to the trees on their property, they must first obtain a permit from the Tree Warden. Rather than local law, this is Massachusetts state law Chapter 87, Section 3.

The City of Gardner pays for removing brush and tree limbs from your property 12 times per year. Waste Management devotes four days per month to pick up limbs and tree pieces. The collection schedule appears on their website, but typically yard waste pickup occurs the first full week of each month. In November, the city provides two weeks of brush and limb removal.

Who Is Responsible For Fallen Tree Removal in Gardner?

Massachusetts takes its trees very seriously. If the tree does not grow on your side of the property line, do not touch it except under two sets of circumstances. If a tree falls on private property in Gardner, the tree removal becomes the property owner’s responsibility, but you can cut down any part of the tree that crosses your property line, the state court found in Shiel v. Rowell, 480 Mass. 106 (2018). That ruling upheld what the law refers to as the “Massachusetts rule.”

The tree removal expense belongs to you. Check your homeowners’ insurance policy because many of these insurance policies pay for part or all tree removal costs. You may be able to have the tree cut up into pieces and removed from your yard by placing it at the curb at one of the thirteen weeks of brush and tree limb collection the City of Gardner provides each year.

If you rent an apartment, house, or other living quarters in the City of Gardner, Massachusetts, your landlord must pay to have the fallen tree removed. Rather than a city law, the state of MA governs this under its provisions for landlord and tenant rights.

In Gardner, the property landlord, as its owner, must pay for the pruning, trimming, maintenance, and all tree removal on their property. This is true for each property the landlord owns.

Cordially approach your neighbor to let them know that a tree from their property fell on your property. In the state of MA, it is not legally required for them to pay for the removal of the tree, but if the tree in any way damaged your property, you should request to trade the homeowner’s insurance policy information. You will need to file a claim for property damage. It may pay for all or part of the tree removal.

How Does the Soil Affect Trees in Gardner?

The University of California at Davis mapped the soil data and topography for the US. According to the UC Davis Soil Resource, Gardner soil consists mostly of Peru, about 61 percent, and about 20 percent of Marlow. A rocky soil, typical to hilly and mountainous areas, the following soils round out its mixture – six percent Lyman, five percent Pillsbury, five percent Berkshire, and three percent Monadnock.

So, what does all of this mean with respect to the soil conditions of Gardner affecting the trees? You will find it tough to grow trees in the native soil. Like many areas in the northeast, this makes an excellent industry for soil companies. You will need to purchase topsoil and have it placed to plant a garden or trees in Gardner. You can purchase suitable topsoil from any number of sand and gravel companies or farm supply firms. Once you have the new soil in place, you could plant apple trees, which grow well in the area.

Gardner’s location in north-central Massachusetts provides it with mild summers with highs typically around 80℉ as well as winter freezes when the temperatures drop. The weather can spike summer temperatures to 90℉, and winter temperatures can drop to 0℉ at times.

This means that while most plants and trees do well during summer, winter can wreak havoc on them. The city gets regular snow and ice during winter, which can freeze limbs, which then break off. When trees freeze, they may not survive if they have already developed a disease or suffered damage. If healthy before the freeze, they should do fine since they have stored carbohydrates to help them recover, so they develop new buds in spring.

What if Dead Trees Are Near Power Lines in Gardner?

You should report any dead trees near power lines to National Grid. Its employees trim trees in each neighborhood every five to seven years. Unless you report the need, the company won’t visit your location sooner than that. The electric company will cut down the dead tree. Homeowners can trim the branches of healthy trees beneath or near the low voltage lines, but you should report a fallen dead tree or a dead tree posing a threat to power lines.

Suppose you plan to plant trees in your yard, phone 811 at least two days prior. National Grid, the electric company serving Gardner, has placement guidelines and buried line information that can help keep you safe.

How Much Does Tree Removal Usually Cost in Gardner?

In Gardner, most tree removals cost between $155 to $2,020, depending on the size of the tree. You can typically expect the costs to remain less than $600 per tree for a tree of a height of 30 feet. Plan on spending an average of around $520 on tree removal in Gardner. Three factors affect these costs.

Recent Requests We Received From Customers In Gardner, MA

One tree has fallen and is now hung up in another tree. That needs to be cut down. I have other trees that I would like to have cut down.

Our lot has several dead trees near our house, creating hazards. If someone could look at the situation, we'd appreciate it.