Looking for affordable tree removal service in Chelmsford, MA? Great! TreeTriage is at your service 24/7. 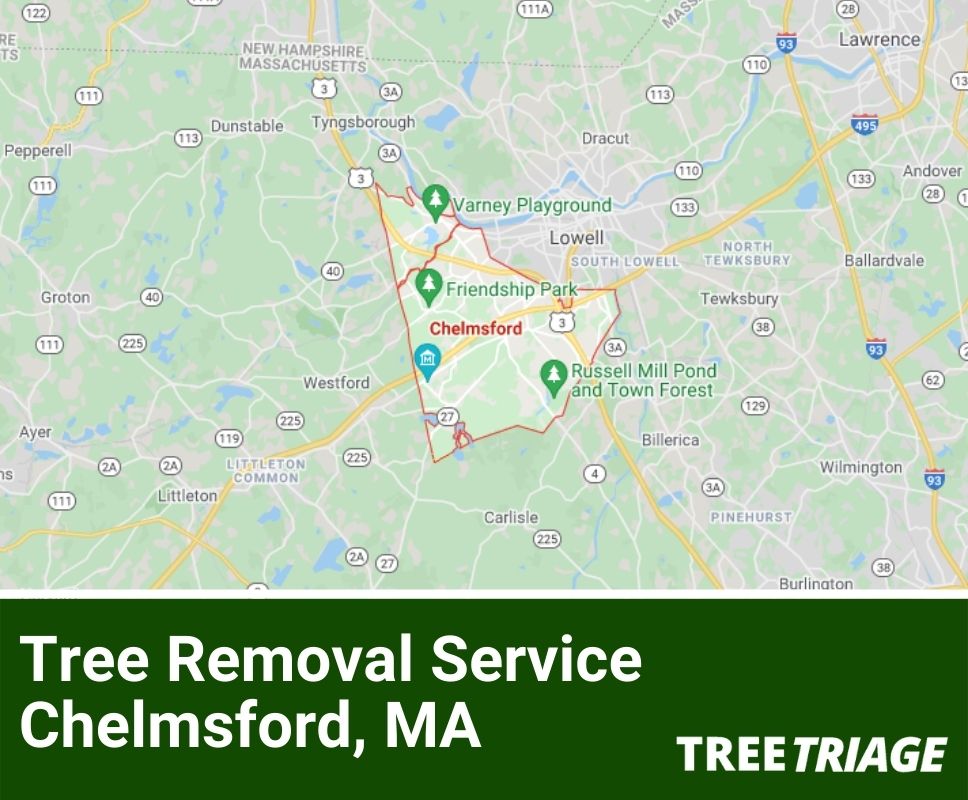 Tell us about your project in the form and we'll get you connected with specialists in or continue reading to learn what you should consider when removing a tree in Chelmsford.

What Are the Most Common Tree Issues in Chelmsford?

There are several native tree species found in and around Chelmsford, but the most abundant are eastern white pine, followed by red maple, and northern red oak. Birch and Ash trees are also quite common landscape trees. Both native and naturalized tree species found in Massachusetts are vulnerable to a variety of issues. The most common tree problems we run across in Chelmsford include:

Adult gypsy moths do their best to provide a good nursery for their caterpillar offspring, which means finding a suitable tree to act as a nursery. Gypsy moth caterpillars are voracious feeders that prefer to munch on oak and aspen tree leaves as opposed to conifers. While most trees can recover from a mild infestation, repeated defoliation can cause trees to become weak and unable to survive.

This invasive beetle, with its flashy emerald green body, is a menace that’s spreading across Chelmsford and the entire state. As their name implies, emerald ash borers literally bore holes into the trunks of ash trees in search of food. Over time, they cut off the water supply route to the tree’s crown. The tree slowly weakens and eventually dies from lack of nutrition.

Dutch elm disease is a deadly vascular disease that primarily attacks elm trees in Chelmsford. The first signs of Dutch elm disease include out-of-season yellowing leaves and visible detection of bark beetles. There is no cure for Dutch elm disease and most trees will end up succumbing to the loss of water and nutrients within a couple of years.

This small insect is causing big problems for trees in Chelmsford and the surrounding areas. In fact, the Asian longhorn beetle is considered to be a much bigger issue than Dutch elm disease. Ash, elm, willow, birch, and several other tree species are under threat and there is a real concern for the potential impact it will have. Millions of acres of trees could be lost to this single insect pest in coming years.

As a homeowner, you want to do as much as you can around the house. But, it’s never a good idea to take on tree pruning without expert help. We see poorly pruned trees all the time in Chelmsford, and we feel bad for the trees that have been hat-racked or mutilated, so badly they’re structurally weak and vulnerable. Worse yet are the neglected trees that no one has ever pruned.

Does the City of Chelmsford Provide Any Assistance in Tree Removal Problems?

When it’s time to remove a tree from your Chelmsford property, you’re probably not going to get any assistance from the city. Anything that happens inside your property lines is really up to you to take care of. So, if limbs and branches litter your yard, or a tree falls, you’ll have to arrange for tree removal and debris cleanup.

If, however, the tree in question is on public property within the City of Chelmsford, they’ll absolutely take care of it. In fact, the city has a Tree Warden and a full set of laws, regulations, and rules designed to protect the trees within the city. If you’re concerned about a city tree, contact the Chelmsford Public Works Department and they’ll send someone out to assess the situation.

Who Is Responsible for Fallen Tree Removal in Chelmsford?

When determining liability for a fallen tree, the tree’s health is taken into consideration. A tree that appeared to be healthy before a natural event like strong winds knocked it down is not the same thing as a clearly diseased or dead tree falling. When the tree is healthy, the fallen tree’s owner is only responsible for damage caused to their own property. Clearly diseased, damaged, or dead trees that fall, however, are the tree owner’s responsibility.

If one of the trees that grows on your property falls onto your property or buildings, it’s your problem. You’ll need to contact us to schedule tree removal services, arrange for the debris to be hauled off, and fix any damage. It’s a good idea to contact your homeowner’s insurance company to find out what your coverage includes when it comes to fallen trees.

If you’re renting a home in Chelmsford, you’re pretty much relieved of any obligation or liability when it comes to the trees on the rental property. If a tree falls, you’ll want to reach out to your landlord or property management company as soon as possible to notify them of the problem. They’ll make sure someone takes care of the tree removal, cleans up the debris, and fixes the damage.

Like any property owner in Chelmsford, you’re responsible for the care and upkeep of the trees on your property. If one falls in your rental property yard or on the home, it’s up to you to clean up the mess and take care of the tenants. Tree removal, debris cleanup, and repairs are all your responsibility.

If one of your neighbor’s healthy trees falls on your land due to strong winds or other weather events, it’s considered an “act of God”. That means your neighbor can’t be held liable for it since they had no way of controlling the situation. However, if one of their trees was obviously dead, dying, or diseased, and falls on your property, they do have a legal responsibility to take care of the costs to have the tree, branches, limbs, and debris removed.

How Does the Soil Affect Trees in Chelmsford?

The majority of soils found in the Chelmsford area are sandy loams, which presents a unique challenge for tree growth. Sandy soils tend to dry out very quickly and nutrients can easily leach out of the soil before tree roots can absorb them. Sand can also be unstable when it becomes saturated with water, which can allow a tree’s roots to move, potentially knocking the tree over.

In areas where there is a higher clay content in the soil, trees can sometimes fall victim to soggy conditions that threaten root systems. Clay also expands as it gets wetter, which can put pressure on tree roots, snapping small roots, bending, and cracking larger roots. This puts the tree at risk of becoming infected with bacteria and fungal infections.

Trees are directly impacted by the weather and New England’s weather is a particular challenge. If there is a drought, trees don’t grow properly and some may even die. Too much rain and trees become waterlogged and vulnerable to root rot and other problems. Strong winds, heavy rains, and lighting from seasonal thunderstorms cause damage to trees in Chelmsford every year. Bitter winter winds, ice, and heavy snow can wreak havoc on trees here.

What if Dead Trees Are Near Power Lines in Chelmsford?

Dead trees and power lines are a potentially deadly combination. If you notice a tree or branches that look like they’re getting close to touching a power line, immediately get away from the area. It doesn’t matter if the tree is on your property, your neighbor’s, or if it’s on city property. Contact National Grid to report the problem tree. Be sure to make note of the specific address or the closest intersection and an accurate description of the tree in question.

How Much Does Tree Removal Usually Cost in Chelmsford?

The average cost to have a tree removed in the Chelmsford area is between $750 and $1,000. But, that’s just an average and some tree removals cost substantially more or less. The only way to know exactly how much it will cost to have one or more of your trees removed is to schedule a tree inspection. We’ll take a look at the tree and determine what it will take to remove it. Some things we’ll consider include:

Small, immature trees are pretty easy to deal with and the cost will be relatively low for each tree. However, large, mature trees are another story. It takes heavy equipment, additional rigging, safety equipment, and a large crew to safely remove a mature tree. Not only are big trees hard work, but they’re also extremely dangerous and that means we charge a premium to remove them.

If your tree is in an open area where we can easily get our equipment and crew in, that’s a good thing. If there’s enough room to bring the tree down without hitting anything, even better. If this describes your tree, your bill will be fairly low. If the tree’s in a hard-to-reach spot, on a steep slope, in between buildings, or anywhere else difficult to get to, we’ll charge more.

Oftentimes when you see an average cost for tree removal, that includes jobs that involve removing more than one tree at a time. In most cases, when you’re having several small trees removed from a Chelmsford property, you’ll pay less per tree than if you’re having one large tree removed. It’s all about the size and location of the trees in addition to the number of trees.

Recent Requests We Received From Customers In Chelmsford, MA

I have three large white pine trees that I would like the lower branches removed. Thank you!

We have two pine trees we recently had cut down. We need them cut up and taken away.

Looking to have 5-6 trees removed and stumps grinded.

Side of house roots from bushes I removed and 3 rocks.