The (Un)surprising Link Between Redlining And Shade Trees

In the United States, owning a home is often seen as the peak of the American dream. However, the issue of housing discrimination against people of color and ethnic minorities in the US is a reality that can’t be denied.

There is no better example of this discrimination than the concept of redlining, which was outlawed in the 1970s but whose impact can still be felt today. But what is redlining? 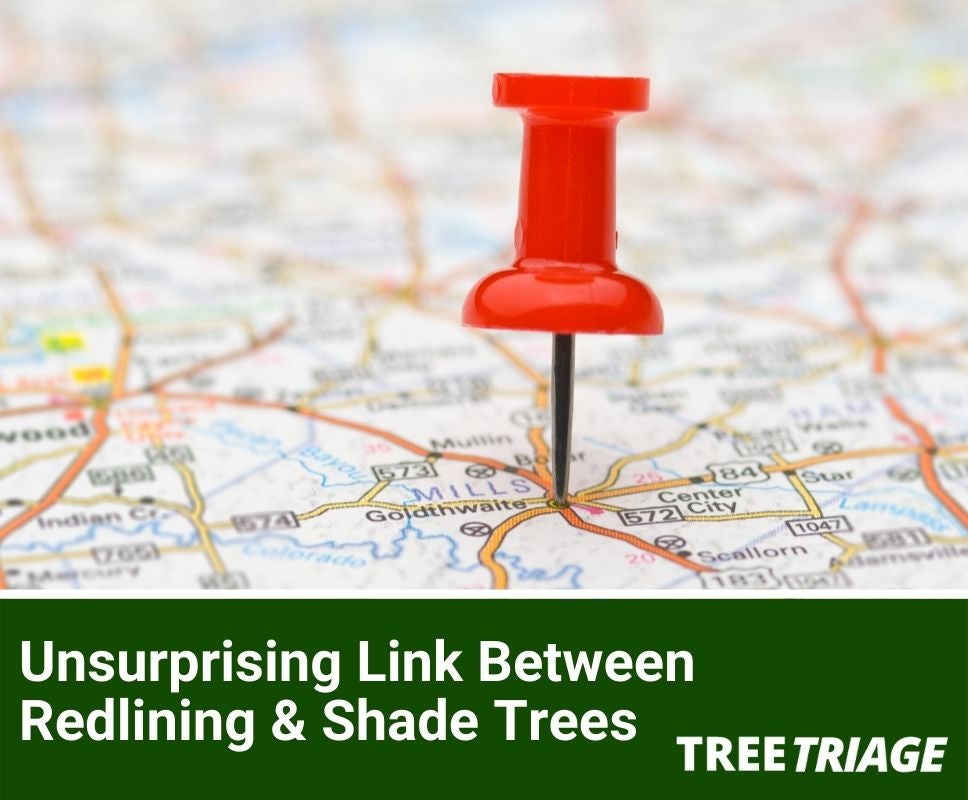 In this article, we’ll cover:

Redlining is the illegal practice of systematically discriminating against certain groups – usually based on race – in providing services. Writing for the news website NPR.org, Terry Gross quotes Richard Rothstein, the author of “The Color of Law,” who says that the practice could be equated to a “state-sponsored system of segregation.”

In a piece she wrote for the New York Times, Candace Jackson provides a broader definition of redlining: “the term has come to mean racial discrimination of any kind in housing, but it comes from government maps that outlined areas where Black residents lived and were therefore deemed risky investments.”

The segregation central to redlining was characterized by some banks in the US denying mortgages to specific individuals in urban areas, usually to people of color. In an article published by CBSNews.com, Khristopher Brooks reports that the practice prevented such individuals from “buying a home in certain neighborhoods or getting a loan to renovate their house.”

Brooks adds that the practice resulted in “banks and other mortgage lenders commonly [rejecting] loans for creditworthy borrowers based strictly on their race or where they lived.”

Jake Blumgart writes for WHYY.org, a public media organization in the Philadelphia region. He calls redlining a system of “Whitelining in the suburbs.” He adds that the system’s main aim was to provide single-family homes with low-cost mortgages to white families in suburban neighborhoods.

Today, the idea of redlining is no longer confined to the housing market; it has become a popular term for discrimination against people of color and minorities in the broader financial services sector, including student loans, insurance, and credit cards.

Why Call It Redlining?

Investopedia.com has the answer: “The term ‘redlining’ was coined by sociologist John McKnight in the 1960s and derived from how the federal government and lenders would literally draw a red line on a map around the neighborhoods they would not invest in based on demographics alone.”

The History and Practices of Redlining

To understand what the redlining system attempted to achieve, it’s vital to follow the history of the practice.

The practice of redlining started in the 1930s. The Chicago Tribune reports that the practice started when “surveyors with the federal Home Owners’ Loan Corporation (HOLC) drew lines on maps and colored some neighborhoods red, deeming them ‘hazardous’ for bank lending because of the presence of African Americans or European immigrants, especially Jews.”

Even though the redlining system is said to have started in the 1930s, Habitat for Humanity notes that this was just an extension of systematic racism that had existed in the US “for hundreds of years before the 20th century.”

Habitat for Humanity also adds that this discrimination has been especially “destructive to people of color, especially Black individuals, who have been denied the opportunity to build a better life for themselves and their families due to historic discrimination in US housing policy.”

Attempting to Solve the Calamity of the Great Depression

Redlining is specifically associated with the establishment of the HOLC. A paper published by the National Bureau of Economic Research reports that following the foreclosures resulting from The Great Depression, the HOLC was tasked with providing new low-interest mortgages to private mortgage lenders and homeowners.

The real problem seems to have started when HOLC’s parent company (the Federal Home Loan Bank Board) came up with the idea known as the “City Survey Program.” According to SmartCitiesDive.com, a website covering news and trends shaping cities and municipalities, the idea involved finding solutions for all The Great Depression-linked outstanding loans by analyzing the ethnic and racial composition of the US large cities.

From the City Survey Program, the Federal Home Loan Bank Board came up with the “residential security maps.” These maps categorized neighborhoods into four grades as described by SmartCitiesDive.com:

Grade A: Represented by the color green signified the best areas that were ethnically homogenous and perceived as having more room for development.

Grade B: Marked by the color blue, these neighborhoods were already fully developed but still considered desirable.

Grade C: These areas had started showing signs of decline and attracting what was considered a “lower grade population.” They were marked yellow on the maps.

Grade D: The red color used to signify these neighborhoods was a mark showing that the areas were dilapidated and inhabited by an “undesirable population” – mostly blacks and Jews – with low homeownership rates and living in old houses.

The Effects of Redlining

In 1968, the Fair Housing Act made redlining illegal. However, even though redlining has been illegal for almost 50 years now, many argue that the effects of the system can still be felt today. Others go as far as arguing that the system may be outlawed, but it still exists.

Brooks acknowledges the idea that the effects of redlining linger up to this day in his CBSNews.com article entitled “Redlining’s legacy: Maps are gone, but the problem hasn’t disappeared.”

Brooks quotes the real estate app Redfin, which concluded that “Scholars who study housing discrimination point to redlining as one factor behind the gulf in wealth between blacks and whites in the US.” The app adds that the system has cost individual black people at least $212,000 in personal wealth since 1980.

The Disparity in Tree Canopy Cover

The fact that redlining had adverse socio-economic effects such as high levels of unemployment, residential vacancy, and living in the less desirable areas is generally accepted. However, the environmental effects of the policy have been mainly overlooked.

Dexter Locke and his colleagues conducted a study entitled “Residential housing segregation and urban tree canopy in 37 US cities” published by the journal npj Urban Sustainability in 2021. The study results show that “areas formerly graded D, which were mostly inhabited by racial and ethnic minorities, have on average ~23% tree canopy cover today.”

On the other hand, the same article states that “Areas formerly graded A, characterized by U.S.-born white populations living in newer housing stock, had nearly twice as much tree canopy (~43%).”

Another study published by the journal Environmental Health Perspectives agrees with the conclusions above. The researchers conclude that “neighborhoods that had lower HOLC grades in the past tended to have fewer green resources like parks and trees in the present day.”

Why Does Tree Canopy Matter?

The findings above indicate that there is a strong connection between tree canopy and HOLC grades. But how does the disparity in tree canopy affect communities?

Dexter Locke and his colleagues have the answer: “Trees are an important component of the urban environment.” The scholars add that the trees “reduce the urban heat island effect and provide a number of other public health benefits such as crime reduction.”

In her piece published by Bloomberg.com, Linda Poon reports that the lower canopy cover in low-income and minority neighborhoods results in such places getting significantly warmer than surrounding areas because of the urban heat island effect. Typically, such areas have fewer trees and other cooling infrastructure that provide shade.

Poon’s views are supported by a 2020 study published by the journal Climate, which revealed that “94% of studied areas display consistent city-scale patterns of elevated land surface temperatures in formerly redlined areas relative to their non-redlined neighbors by as much as 7 °C.” The researchers add that at the national level, formerly redlined areas are around 2.6 °C warmer compared to those that were never redlined.

Indeed, redlining was outlawed in the 1960s, but Poon cites Calvin Gladney of Smart Growth America, a nonprofit organization aiming to create sustainable communities, who says, “just because you take away a rule doing damage at the time, that damage doesn’t go away.”

Jenna Leventoff, a senior policy counsel at Public Knowledge, argues that “The same neighborhoods that were once redlined by banks and insurance companies now face similar discrimination by internet service providers.” Public Knowledge is an organization that helps shape policy on behalf of the public interest.

Brentin Mock agrees with Leventoff in his Bloomberg.com article entitled “Redlining is Alive and Well—and Evolving.” Mock argues that even though banks may be banned from practicing unfair discrimination based on race, they will “find some other application to filter out undesirable borrowers.”

Finding Solutions to the Redlining Legacy

We can talk all we want about the effects of redlining, but that will achieve very little if we can’t come up with ways of mitigating them. The National League of Cities has some suggestions:

Even though the government can help reverse the lingering effects of redlining, you can also play your part as an individual. Something as simple as growing a tree or coming together as communities to look after the local parks can go a long way in improving our environments.