Looking for affordable tree removal service in Newport, KY? Great! TreeTriage is at your service 24/7. 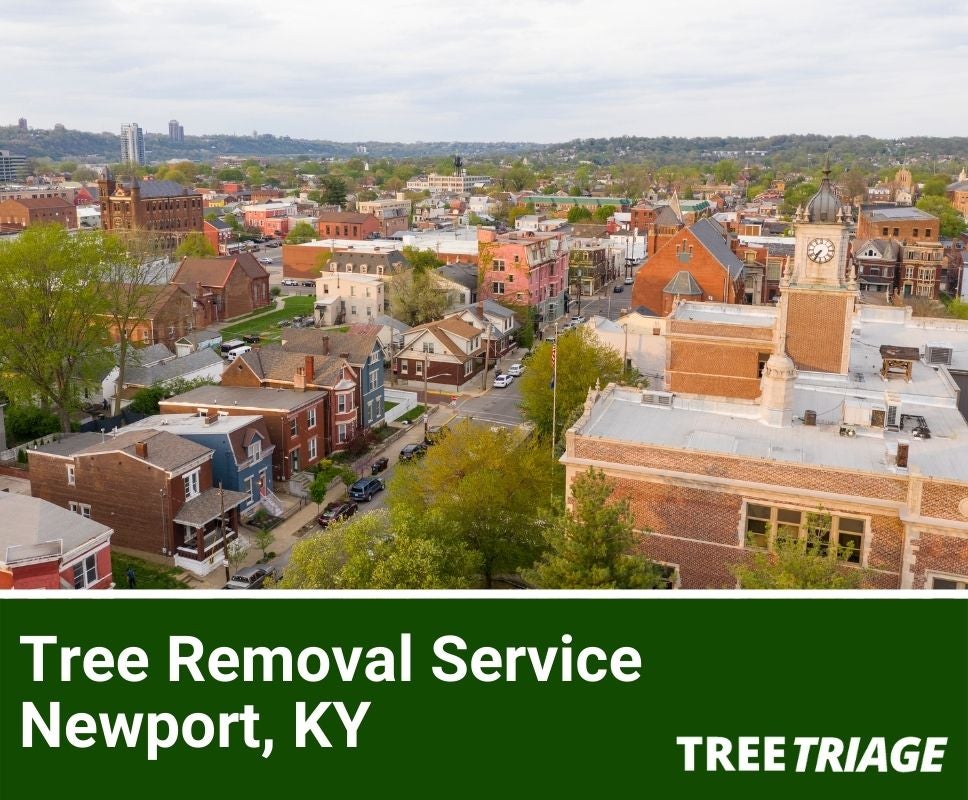 Tell us about your project in the form and we'll get you connected with specialists in or continue reading to learn what you should consider when removing a tree in Newport.

What Are the Most Common Tree Issues in Newport?

In Newport, trees face a number of common problems that the city and residents need to deal with. Typical tree troubles include things like termites, diseases caused by improper pruning, and a lack of nutrients in the soil. These are all fairly easy to deal with on your own and usually don’t result in a removal. There’s also the persistent threat of a bad driver crashing into a tree, though that’s not really something you can protect again in most cases.

However, something more serious is the emerald ash borer (Agrilus planipennis). These pests can devastate trees, primarily in the ash family. After being laid in cracks in tree bark, the larvae chew into the tree to feed on its soft interior wood, burrowing out after maturing. Both the ash borer’s damage and the potential for disease and other pests to finish the job have done a number on Newport’s trees in the past, 2018 being a major year for tree removal as a direct result of an infestation. By the end of 2019, there were only 88 ash trees still standing.

Flooding is always a possibility in Newport thanks to it being located right next to two rivers. While the floodwall does help to manage the water, it’s not uncommon for there to still be some flooding at particularly rainy times of the year. In an especially bad flood, it’s possible for trees to be uprooted and swept away. Additionally, the thunderstorms that often precede these floods typically come with high, damaging winds and the potential to obliterate trees with bolts of lightning.

Does the City of Newport Provide Any Assistance in Tree Removal Problems?

Newport does not provide residents with tree removal assistance. While the city does remove trees regularly if they are dead, diseased, or otherwise no longer wanted, officials do not typically provide assistance to residents who need a tree removed from their private property.

Who Is Responsible For Fallen Tree Removal in Newport?

Understanding who’s responsible for a fallen tree isn’t always as clear-cut as it might seem. While the minutiae of tree law is probably the last thing on your mind after a tree’s crashed into your living room, knowing who pays for the removal is still important. Let’s examine who might be responsible for removing a fallen tree depending on their claim to ownership of the tree.

As a homeowner, you probably own your land and the trees growing out of it. If this is true, you’re the one who has to have those trees removed after they fall. This isn’t too hard to understand; after all, they’re your property, so you have to take responsibility for them. That said, if someone else were to knock your tree over, you could hold them accountable for that and make them pay for the removal, plus other damages if you want to press the issue.

If you aren’t in that kind of situation, though, you’re paying out of pocket. However, you might be able to skip the bill depending on how your insurance policy is written. Many insurers stipulate different scenarios in which you’ll be covered for tree removal. Usually, you can’t be the one responsible for the tree falling. If that describes what happened to your tree, you might not have to pay anything for the removal.

For the most part, renters don’t own the property they live on. This also means they don’t own any of the trees on that property, so they aren’t responsible for having them removed if they fall over. Unless your actions have caused the tree to fall over, you’re not obligated to do anything about a fallen tree other than alert the landlord that it has fallen.

As mentioned before, landlords are responsible for removing fallen trees on the property they rent. Not only are they the owners of these trees, Kentucky rental laws state that landlords have a duty to keep rental properties (common areas included) safe and habitable. Having a rotting tree on someone’s lawn is not conducive to a safe or habitable environment, so this needs to be taken care of like any other maintenance task. As the law says, landlords have 14 days to complete tasks like this, otherwise, tenants can withhold their rent.

Like anyone else who owns a home, a landlord should be insured for the property they rent. Because of this, they likely have similar coverage to a homeowner for their tree removals. This obviously involves checking the specifics of the policy to be certain, though.

In general, determining who removes a tree if it falls onto a neighbor’s land comes down to ownership. A tree’s owner is whoever’s land the trunk grows on. If the tree stood on your lawn up to the moment it fell over, it is still your responsibility to remove it even if it’s crossed the boundary. Note that this is specifically about a tree’s trunk, as neither roots nor branches that go beyond a fence are counted towards ownership. A trunk growing past the border, however, does create a situation of joint ownership, in which case you’ll likely have to work something out in regard to the removal costs with the neighbor who co-owns the tree.

How Does the Soil Affect Trees in Newport?

While much of Newport is covered by concrete, the soil survey data from the county indicates that the dirt there is composed largely of clay, silt, and loam. While this does make for a fertile place to grow, the limited growing space within the city means there aren’t many places to grow new trees in Newport. That said, they are working to change this with tree planting days, cutting out sections of concrete to make room for more green space. Currently, the city maintains around 3,100 trees on public land to keep an approximate 33% tree cover.

Due to the city’s history of floods, many of the trees planted in Newport have deep root systems to help them hold into the ground. A lack of competition among trees in the most urban parts of the city means they can really sprawl underneath the streets.

Newport is characterized by hot, wet summers and chilly, slightly dry winters. Humidity is a constant for much of the year, a natural part of being located at the intersection of the Ohio River and the Licking River. Despite this, the area only gets about 45 inches of rain per year, accompanied by 13 inches of snow in winter. In general, trees that are adapted more towards the heat do better here, as the colder days are less frequent than the warmer ones and average lows only get a few degrees below freezing.

While the area isn’t breaking any precipitation records, flooding has historically been a problem for the area. Again, that’s to be expected when it’s so close to two different rivers. After a particularly devastating flood in the 30s, the city’s iconic flood wall was constructed in 1948. This has helped to cut down on instances of flooding, though water levels have risen past the wall. Either way, flooding poses much less of a risk to trees, thanks to these factors.

What If Dead Trees Are Near Power Lines in Newport?

Newport performs annual safety checks on all of its public trees. In the majority of cases, a dead tree anywhere will be spotted during one of these checks and slated for removal. If you happen to find a tree in a precarious place that has yet to be removed, you can contact the Community Services Department by calling 859-292-3686. Once reported, the tree will likely be removed quickly.

How Much Does Tree Removal Usually Cost in Newport?

The average cost for tree removal in Newport, KY is about $550, but your total could range anywhere from $100 to $1,700 or more. Several factors can change your final tree removal bill, including:

Calling us out on an emergency job usually carries with it a higher price. It’s a major hassle for our crew to perform an emergency tree removal. This is especially true on weekends, after hours, or on holidays when people aren’t normally working. To avoid all of this mess, try to be as proactive as possible about the health of your trees, treating their ailments or having them removed before the situation grows worse.

Being able to get to a tree that needs removing is a crucial part of removing a tree. Trees near homes, sheds, or other personal property are more challenging to remove and will almost always come with higher costs.

When it comes to tree removal, size is pretty important. The taller your tree, the more work goes into taking it down. Not only is it simply a longer job, taller trees sometimes require a lot more of our crew members and equipment to remove safely. After all, making sure the trees come down without crushing someone’s car is a big part of the job. While not always the case, expect an extra $100 or so added to the per-hour rate for every 20-feet above 25-feet your tree stands.

Recent Requests We Received From Customers In Newport, KY

2 trees in the back yard right by the deck need chopped down 1 is rotted.

I have a dozen trees I need taken down on a building lot in Springfield.

Need the tree to be topped rounded up around.

Cedars in The back, topped and made narrower.