Looking for affordable tree removal service in Overland Park, KS? Great! TreeTriage is at your service 24/7. 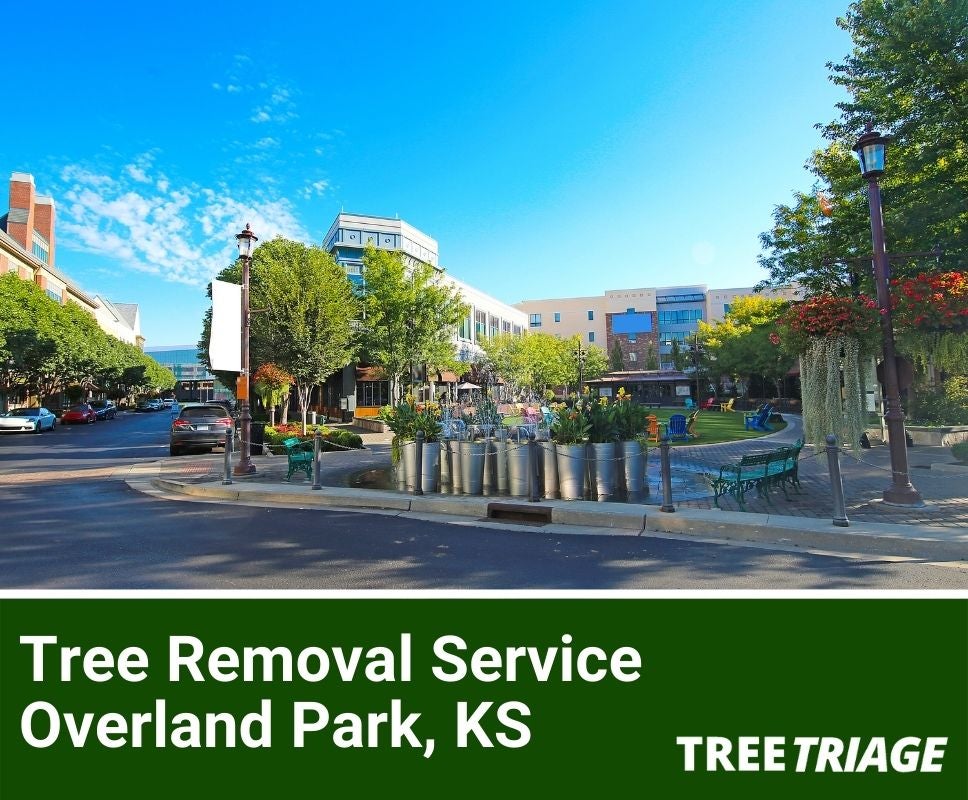 Tell us about your project in the form and we'll get you connected with specialists in or continue reading to learn what you should consider when removing a tree in Overland Park.

What Are the Most Common Tree Issues in Overland Park?

Trees are a natural resource that many of us take for granted as we pass by them every day. Just because trees are such a common and bountiful sight does not mean that we should so easily disregard them. They provide a lot of life to Overland Park, KS, and the entire world. A variety of ailments and diseases sadly plague those same trees that can make it difficult or impossible for them to grow and thrive.

Dutch Elm Disease is a significant factor in the health of trees in the entire state of Kansas. It is devastating because the fact is that the American Elm tree was once among the most plentiful in the United States. This particular tree can proliferate in urban environments, and it made for the ideal tree to have around as the population grew. However, as Kansas State University reports, this disease was accidentally brought to the United States in the 1930s and eventually made its way to Kansas by 1957. The condition now exists in tree populations throughout the state, and it has taken out almost all the old native trees in Kansas.

Forest trees and the landscaping trees that one might have in their front yard are vulnerable to a disease known as Oak Wilt. It is a fungal disease that has been around since the 1940s. It is said to sprout up just from time to time, but it is devastating to the trees that it latches onto when it reaches that point. The eastern third of Kansas is the area that is most likely to report this particular disease, but it can show up in Overland Park or anywhere else.

Another issue is the pests that invade tree populations. The lists of bugs and insects that go after trees in Overland Park is so long that it has to be categorized alphabetically. From Aphids to Zoysiagrass Billbug, there is no shortage of pests looking to take advantage of the resources that belong to the trees and need to be used by those same trees to survive. It is a worrying development that continues to plague the trees of Overland Park.

Does the City of Overland Park Provide Any Assistance in Tree Removal Problems?

The city of Overland Park is not going to simply jump to assist those who need to have a tree removed from their property. That is not the proper function of government, and it is undoubtedly not something that the city will do as a public service. State law in Kansas very specifically spells out that the local governments will not remove trees unless those trees pose a risk of public harm. Then they will only do so if they had previously provided notice to the owner of those trees that they need to remove the trees.

The City must give the property owner an adequate amount of notice to do the right thing and get the tree removed before they come in themselves to get the job done. That said, they will take all necessary measures to ensure that the City protects the public from the potentially reckless actions of any property owner who is not maintaining his or her trees properly.

Who Is Responsible For Fallen Tree Removal in Overland Park?

The law holds homeowners to the highest level of responsibility for maintaining the trees that are rooted in their property. In fact, not only does the homeowner have to worry about the removal of trees that have died on their property, but they are also responsible for trimming and maintaining trees so that they do not obstruct public spaces. On top of that, the City may order a homeowner to remove a live tree if it is diagnosed with Dutch Elm disease. The reason is that Dutch Elm disease will eventually take that tree out regardless.

Be careful if you are a renter not to allow yourself to get roped into paying for things that you are not responsible for. Overland Park, Kansas, has protections afforded to renters via tenant rights spelled out by the Department of Housing and Urban Development.  Those rights come from a federal agency, but they apply to locals in Overland Park. Renters should never be held legally responsible for removing trees from a property that they are renting. That is the jurisdiction of the property owner him or herself.

Landlords carry the burden of the removal of trees rooted in the property that they oversee. An important distinction here is that a property manager acting would not personally have to write the check from their account to get a tree removed. The actual cost of tree removal defaults back to the owner of the property. However, a property manager may be the one who reaches out to a tree removal company to get the service set up.

A tree that falls into a neighbor’s property can cause a lot of issues. The neighbor will be upset by the obstruction on their property, and they may even want to try to take care of the expense of tree removal themselves. This might sound like a kind-hearted and generous offer, but the reality is that the neighbor is not responsible. They need to get the tree off of their property as soon as possible, but the legal liability always falls back to the property owner where the tree is rooted. The owner should want to handle this quickly to avoid additional disputes and issues with their neighbors.

How Does the Soil Affect Trees in Overland Park?

There are regular releases of scientific reports about the quality of the soil in Overland Park. These reports are known as soil surveys, and they serve the vital function of informing the public about the quality and types of soil present in Overland Park. The reports are valuable information to farmers and others who rely on the land for their livelihood. Still, they can also be helpful reports for determining how the soil might impact trees in the area.

There are dozens of different types and qualities of soil in Overland Park, and each has its scientific name. To avoid getting too much into the weeds, it is best to simply understand that the soil in Overland Park is generally favorable to the growth of trees. The soil quality is essential since extreme weather can hit the area at times, and it also has other risk factors for trees, such as the diseases and pests mentioned before.

Overland Park, Kansas, sits right in the middle of an area coined “tornado alley.” The area is named this because it’s in a plains state that sees a higher number of tornados. The flat land and other weather conditions brew together just perfectly in this area to make it far more vulnerable to tornados than other places. Overland Park has an average of three tornados per year. That may not sound like much, but considering the destructive power of those storms, it is a big deal.

These storms are not good news for trees. They are basically like sitting ducks to the wrath of a powerful tornado. Worse yet, the trees themselves can be uprooted by a strong enough storm and become like projectile missiles towards populations of people and buildings. It is a dangerous thing, and it is a factor that you should consider when reviewing the risks to trees in this area.

What if Dead Trees Are Near Power Lines in Overland Park?

Anyone who has a dead or dying tree that sits near power lines in Overland Park, Kansas, will receive a notice from the city that details the policies that the City has laid out for handling this situation. You can think of it as a gentle reminder in some sense, but the City is deadly serious about taking care of this problem. Power lines are expensive to produce and maintain, and the city will not stand by while dead trees take out those same power lines. They need their residents to be more responsible than that.

The notice will give the property owner a minimal amount of time to take care of the dead tree before the city moves in to do it themselves. Should the city have to do this work, they will charge the owner back for the services rendered, and that charge will almost always be well above the market rates that the homeowner would otherwise have paid.

How Much Does Tree Removal Usually Cost in Overland Park?

Tree removal in Overland Park typically costs between $300 and $2,100, but your cost depends largely on the below factors.

The homeowner who waits until their time has nearly expired to take care of a dead tree will very likely pay a much higher cost to take care of the problem now. We cannot simply rush specific orders to the top of their queue without charging more for that privilege. It is best to schedule an appointment as far in advance as possible to avoid some extra charges that accompany waiting.

An easily accessible tree that we can simply remove from the property is cheap and affordable on almost any budget. However, a large tree that requires us to chop down large branches first is likely to incur many more expenses. Thus, the tree’s location (aka if it is still standing or not) will impact the overall cost.

Tree removal is one thing, but you may also want stump removal, wood chipping, or log splitting for firewood. These services will all add to your total.

Recent Requests We Received From Customers In Overland Park, KS

I have a stump thats sitting at ground level that needs to be removed. Not sure what variety it is but its probably around 25 years old.

We have approx. a 8-10' stump in a square between our house and walkway that needs removed.

Removal of roots in multiple locations along fence lines and in the yard.

I have a pile of tree limbs I need removed.