Looking for affordable tree removal service in Naperville, IL? Great! TreeTriage is at your service 24/7. 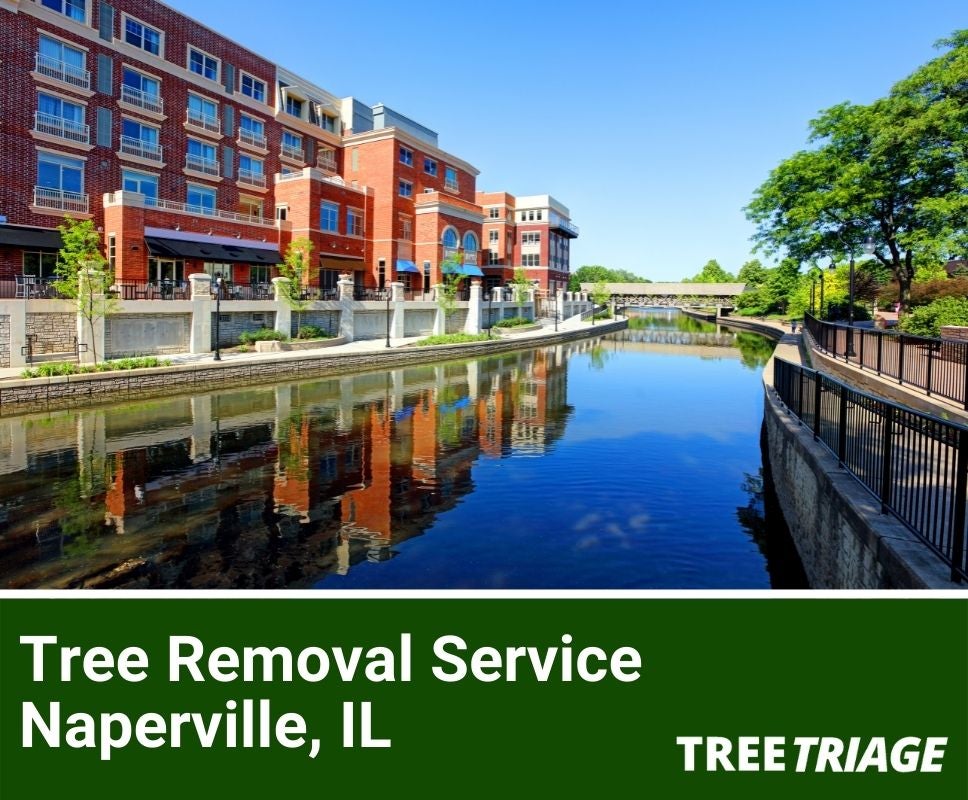 Tell us about your project in the form and we'll get you connected with specialists in or continue reading to learn what you should consider when removing a tree in Naperville.

What Are the Most Common Trees in Naperville?

Naperville experiences several problems with trees that are common in Central Illinois. One of the most common problems with trees in Naperville is that anthracnose harms many trees in the area. Anthracnose is a fungal disease that causes many deciduous trees such as ash, oak, sycamore, maple, and birch trees. In the worst cases, the fungus can rot leaves right off the trees, and the trees will ultimately need to be cut down when they die.

Other fungal infections such as Bur Oak Blight, Cedar Rusts, and Dutch Elm Disease all impact trees popular in Naperville and are often present in the area.

Root Rot is another common problem in Naperville, and it’s when one tree gets a fungal infection in its root system. The root is unique in that it can spread through root systems to infect multiple trees and kill off entire swaths of them in shorter periods of time than other fungal infections.

Trees, often common in the Naperville area, can endure four (4) different seasons with the diverse weather that Naperville receives. These trees often include a variety of maple and oak trees as well as ginkgo, elm, chestnut, and dogwoods to name a few.

Does the City of Naperville Provide Any Assistance in Tree Removal Problems?

The City of Naperville has a program that helps keep the city beautiful. Their program is called Parkway Trees — Removal & Replacement by the City, which shares the cost of tree removal and replacement 50/50 with residents to help keep the city beautiful. The idea is to keep the cost of removing and replacing trees affordable in the city so that homeowners feel like they can afford to cut down and replace trees on their property as needed. The program allows residents to claim up to one tree per year, and the city will share the cost of removal and replanting 50/50 with the homeowner.

The city will inspect the tree and determine if it needs removal. If the tree qualifies, then the city will split the removal cost 50/50 with the resident, but the resident can only use it for one tree per year on their property. Residents who have questions about qualifying for cost-shared tree removal can call the Urban Forest Development Office at (630) 420-6059 for further information on applying and seeing if their tree is eligible for the cost-share tree removal program within our city.

The City of Naperville is also responsible for paying for the entire removal of any tree that is removed and replaced and is on the city’s public property. For example, trees along roadways or in public parks or recreational spaces are 100% the responsibility of the City of Naperville when it comes to covering any costs of trees that need to be removed and replanted within the city.

Who is Responsible for Fallen Tree Removal in Naperville?

Naperville has a program called Parkway Trees — Removal & Replacement by the City. The city helps residents replace up to one tree on their property each year by splitting the cost 50/50 with the city if the tree qualifies upon an inspection by a worker from the Urban Forest Department. The program started during the 2018 budgeting session, which helps residents remove and replant trees at a more affordable cost.

The following people are responsible for removing trees that fall on their property in Naperville:

If you are a homeowner, you are responsible for all the trees that will fall on the property where your home (or business) sits. You will need to cover the costs of cutting down and replanting any trees on the property that need to be taken care of. You can always apply for the Parkway Trees – Removal & Replacement by the City to help you remove up to one tree on your property per year and split the cost 50/50 with the city. That program can provide some financial relief for your property maintenance budget.

Landlords are responsible for covering the costs of all repairs that your rental property needs while tenants reside on the property. These responsibilities include removing trees and replanting trees on your rental properties. The good news is that you can write all of your property maintenance costs off of your taxes each year as a business expense.

If you have a tree fall on your property, whoever had the tree on their property is responsible for covering the cost of removing and replanting the tree. It’s important to know where your property lines fall so that you can determine if the tree is on your property or the property of a surrounding neighborhood.

If the tree ends up being on your property, then be sure to remember that you will need to cover the cost of having the tree removed and replanted. You will also be responsible for any damage done to your neighbor’s property when the tree fell. This is why it’s important to understand where your property lines are and whose responsibility the tree is and who needs to cover the associated cost.

Your neighbors are people that have to live next to you. Treat their property as you would want yours treated. It would help if you always try to make a situation like this right as you will have long-term relationships with those around you impacted by what happens over time.

How Does Soil Affect Tree Health in Naperville?

The most common soil in Naperville is the same type of soil prevalent in most of Illinois, and it’s called drummer soil. Drummer soil accounts for more than 1.5 million acres of soil throughout Illinois’s central and northern parts. These soils are primarily found in the prairies and central parts of the United States. These soils are great for growing soybeans or corn, which are common crops in Illinois.

Naperville experiences a wide variety of different types of weather throughout the year. Temperatures range from as cold as 16 degrees in the winter, and it gets as hot as 84 degrees in the summer. That doesn’t include cold snaps and heat waves that can make temperatures hotter or colder at certain times throughout the year. Naperville sees an average of approximately the US average in precipitation each year with about 38 inches of rain and 28 inches of snowfall throughout a calendar year. There is an average of 189 days of sun and about 120 days of precipitation each year in Naperville.

What if Dead Trees are Near Power Lines in Naperville?

If a dead tree falls near a power line, locals in Naperville are asked to call Naperville’s Electric Utility to report the downed tree so that it can be cleaned up as soon as possible. Naperville’s residents are asked not to remove trees independently as it can lead to serious injury or even death. Removing downed trees near a power line requires trained electrical professionals to be able to remove the trees safely.

Please reach out and notify Naperville’s Electric Utility at (630) – 420 – 6111 to report a downed tree near a power line. They will do they’re best to get the tree removed as soon and safely as possible. We take the health and well-being of our community very seriously and will do what we can to keep the community safe and remove these trees before they cause additional problems.

How Much Does Tree Removal Cost in Naperville?

The average tree will cost between $100 and $1800 in Naperville depending on which tree needs to be removed. The following are some factors that are taken into consideration when removing a tree in Naperville:

Trees that are close to physical structures like someone’s home, a shed, or other structures will have to be taken down much more carefully than a tree standing on open land with no structures around it to damage. The slower the process goes, and the more time it takes to remove a tree, the more you will have to pay our crew to remove the tree and the additional labor they will have to do to remove it.

The Amount of Labor Required

Large trees will generally require more labor to cut them down so you will have to pay more money to have the tree cut down. Many of the larger trees will have to get cut into pieces and turned to chips to remove them safely and efficiently. All of that causes extra costs when removing a large tree from your property.

These are just some of the costs that factor into removing a tree from your property in Naperville. Of course, the cost varies based on the prices in your area and what the market is like in your city, but the more work it takes to remove a tree, the more you will have to pay to have it removed.

Recent Requests We Received From Customers In Naperville, IL

Have several trees that may need trimmed or removed. One tree is leaning on roof of new garage.

Quote on removal of 2 Hawthorne trees, on the NW corner of our home. I can send photos.

I need 3 trees removed from our property.

Trimming of multiple trees in the spring.