Looking for affordable tree removal service in Joliet, IL? Great! TreeTriage is at your service 24/7. 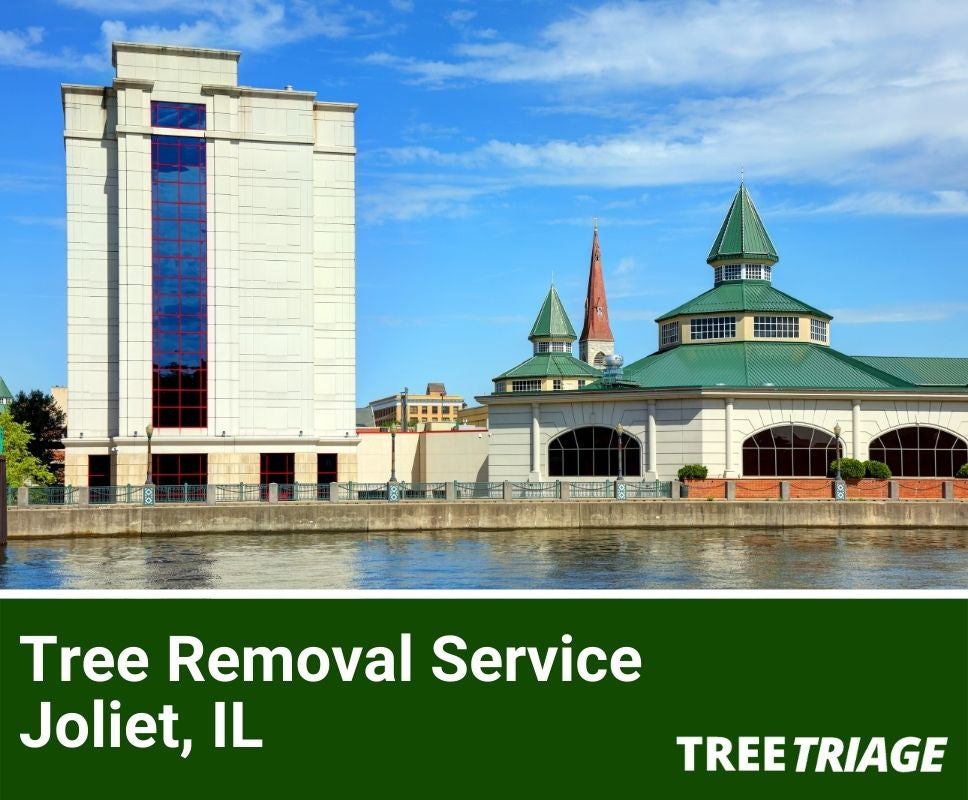 Tell us about your project in the form and we'll get you connected with specialists in or continue reading to learn what you should consider when removing a tree in Joliet.

What Are the Most Common Tree Issues in Joliet?

Joliet is the third-largest city in Illinois State and has a population of 147,829, according to the 2019 Population and Housing Unit Estimates.

Joliet experiences a favorable climate with hot, humid summers and cold winters. In addition, rainfall is moderate throughout the year and makes trees in Joliet thrive. Nonetheless, according to the University of Illinois Plant Clinic, there are common issues affecting trees in Joliet.

It’s believed that this beetle must have migrated from Asia through wood packing materials. Adult beetles measure 0.5 inches long and are metallic green in color.

These beetles only attack ash trees by drilling tiny holes into the tree. During spring, adult beetles leave their habitats through the D-shaped holes they’ve created.

Woodpeckers love their larvae, so if you see extensive woodpecker damage on trees, it’s a sign of an emerald ash borer infestation. This beetle mainly destroys ash trees through its larvae which feed on the phloem and xylem, thereby hindering the flow of food and water.

Sudden oak death or ramorum blight disease is caused by a fungus pathogen that mainly attacks oak species like coast live oak and tanoak. Other tree species the disease attacks include rhododendrons and camellias.

Sadly, diagnosing this disease by sight can be difficult since the signs are similar to other tree diseases. Therefore, we recommend seeking help from our certified arborists when you notice massive tree dieback or leaf blight.

Thousand cankers disease combines the walnut twig beetle and the fungal infection known as Geosmithia morbida. In addition, the disease mainly affects the black walnut tree species in forests and urban spaces, thereby lowering the economic potential of this tree.

It starts when the walnut twig beetle drills tiny holes in twigs of trees and eats into the plant’s tissues. These tissues are responsible for transporting food and nutrients to all parts of the tree. However, an infestation of these beetles hinders the nutrient and water supply needed for healthy growth.

But it doesn’t end at that. The holes open doors for fungal infection attacks, which destroy the trees further.

The root and butt rot disease is a fungal infection mainly affecting the following tree species in Joliet:

The disease is mainly associated with old trees and causes rotting around the roots and the stem. This weakens the tree, making it susceptible to breakages and windthrow, which means that strong winds can easily break all your affected trees.

The fungi causing the disease live in the soil, so it starts by attacking the tips of the roots before moving to the stem. Unfortunately, it’s not possible to diagnose the disease early on; the only time you know about it is after it’s weakened the tree.

Armillaria root rot is a fungal infection affecting mainly deciduous trees, shrubs, and evergreen trees in Joliet. It leads to poor growth and discoloration of foliage to a brownish color. Eventually, it weakens the tree and makes it susceptible to breakage by the wind.

In addition to these signs and symptoms, you should also look out for branch dieback. The disease affects roots and leaves, preventing water intake by the roots and the manufacturing of food by the leaves. This alone can kill thousands of trees in a few weeks.

Lastly, the disease is destructive and needs proper attention. Once you notice these signs, it’s best to contact us for help.

Diplodia tip blight is a fungal disease attacking mainly conifers, especially the Austrian pine. The other pine trees this disease affects include:

Apart from conifers, it attacks and destroys other tree species, like the Douglas fir, Norway spruce, Colorado blue spruce, American larch, and some cedars. The disease has the potential to destroy several tree species, meaning it requires immediate attention after diagnosis.

Surprisingly, only above 15-year-old trees are susceptible to this disease, except for seedlings. In addition, it can be severe in trees that are over 30 years old, and quickly kills ones that have already been weakened by other diseases or drought.

The bacteria is spread by leafhoppers and spittlebugs. These insects feed on xylems meant to transport water and nutrients to other parts of the tree, thereby hindering the healthy growth of trees. Unfortunately, the disease is potentially dangerous and has no cure. So, it quickly kills the affected trees.

When you notice leaves turning brown prematurely, it’s usually a potential indication of bacterial scorch. Another sign to look out for is the browning of leaf margins. Since the disease is fatal and has no cure, consulting our arborists immediately can go a long way.

Does the City of Joliet Provide Any Assistance in Tree Removal Problems?

The city of Joliet assists in tree removal problems if the tree is one of the city parkway trees. What are city parkway trees? According to the city’s website, these are trees found in the grassy easement between sidewalks and streets’ curb lines.

Therefore, the city is only responsible for trees found in public spaces like city parkways. If a tree needs removal and it’s in private property, the property owner should handle it and bear the cost.

However, if you’re not sure what to do when a tree in your neighborhood needs removal, you should contact the city authorities or a professional arborist. Our team can come to assess the situation and advise accordingly.

Who Is Responsible for Fallen Tree Removal in Joliet?

According to the city of Joliet, the city doesn’t remove dead, dying, or fallen trees found on private property. Therefore, it’s the responsibility of residents and key individuals. We’ve put together a list to explain who might be responsible for tree removal in various situations:

If you’re a homeowner, you also own the property, meaning you’re fully responsible for tree removal. However, if you have homeowners insurance, your provider will help cover the cost.

If you’re a renter, it means you don’t own the property. Therefore, you’re not responsible for organizing tree removal or covering any of the associated costs. However, if you notice a tree on the rental property looks diseased or dead, you should contact your landlord immediately so that they can take care of it. This is in your best interest because fallen trees can pose risks to both your physical safety and personal property, like cars.

If you’re a landlord, it likely means you’re also the property owner. Therefore, it’s your responsibility to remove any tree that falls within your property. The good news is that you don’t have to do it on your own. Ultimately, it is your responsibility to maintain the property and keep your tenants safe, so being vigilant about tree removal is of utmost importance.

If your neighbor’s tree falls in your yard, it’s your responsibility to remove it. The only exception to this is if you can prove that your neighbor was negligent, meaning that they knew the tree was sick or dying and did nothing to prevent the tree from falling into the yard.

Otherwise, in most cases, when there’s a storm, for example, and your neighbor’s tree falls into your yard, it’s your responsibility to remove it.

How Does the Soil Affect Trees in Joliet?

Some parts of the city have soils that favor fungi and pests, thus contributing to common tree problems like root and butt rot diseases. In particular, the emerald ash borer is problematic and the leading destroyer of ash trees in Joliet.

In addition, according to the soil studies, there are four broad categories of soils in Joliet. These are Millsdale soils, Channahon soils, Romeo soils, and Plattville soils.

Plattville soils are deep and well drained, meaning they allow plant roots to go deeper into the soil. They also facilitate easy intake of oxygen. Therefore, they’re the best for most tree species.

What if Dead Trees Are Near Power Lines in Joliet?

Dead trees near power lines pose a threat to humans due to the risk of electrocution. If the trees are in a public space, the city is responsible for removing them. However, if they’re on private property, individuals or residents should call our team to handle the situation.

How Much Does Tree Removal Usually Cost in Joliet?

Our records show that tree removal costs in Joliet range between $200 and $2,000, depending on several factors like tree status, nature of work, and accessibility.

Tall, aged trees cost more to remove than short and relatively younger ones. So, depending on the nature of the tree, expect to pay more or less than the average cost.

Stump removal costs an extra fee of between $100 and $150, which means that you should add another $100-$150 to the typical cost to get the overall cost for removing your tree.

If your tree falls in a site that’s easy for our team to access, it will cost less to remove the tree than if it was located in a trickier area. For example, if the tree falls near any buildings or power lines, we may need additional equipment and arborists to complete the job, which will increase the overall cost of tree removal.

Recent Requests We Received From Customers In Joliet, IL

We have 1 possibly 2 large trees and some small ones that we would like to get a quote on for removal. would you be able to come out on a Saturday morning to look at the project?

The tree in front of the house removed completely. Also depending on the price the tree on the other side of the driveway.

Remove tree in north west corner of lot to down below ground.

Need and estimate on a tree removal near my garage.

Remove a dying willow tree in our back yard.