Looking for affordable tree removal service in Sioux City, IA? Great! TreeTriage is at your service 24/7. 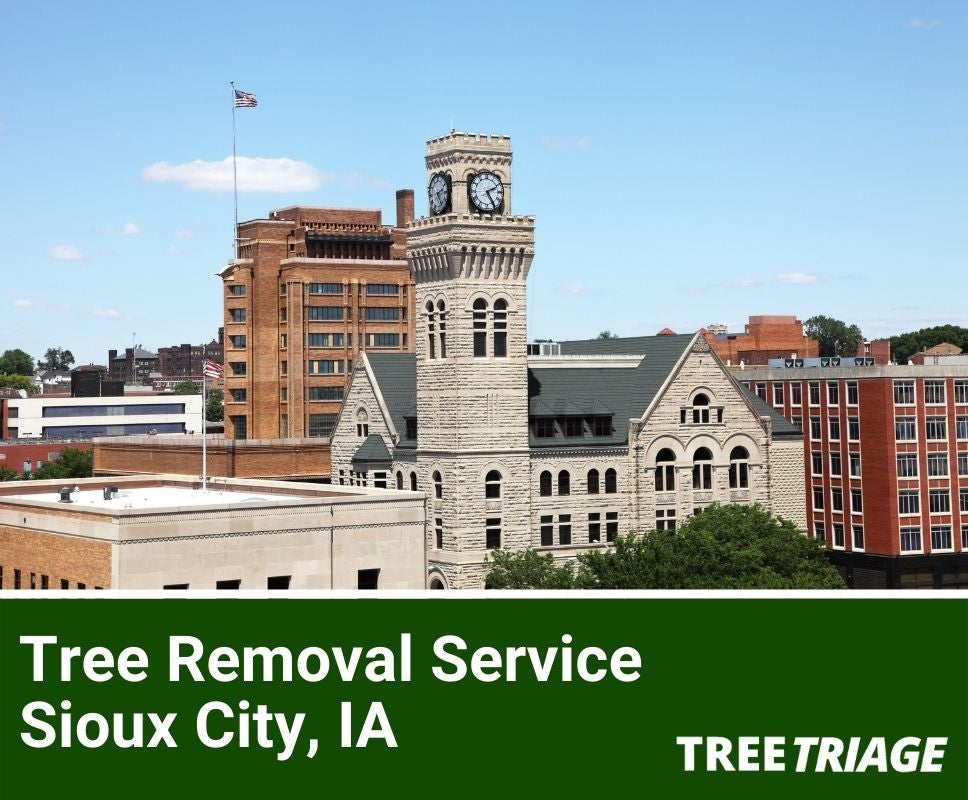 Tell us about your project in the form and we'll get you connected with specialists in or continue reading to learn what you should consider when removing a tree in Sioux City.

What Are the Most Common Tree Issues in Sioux City?

Sioux City is situated along the Missouri River, just east of Nebraska in the northwest corner of Woodbury County. The city hosts various golf courses and parks, allowing residents to enjoy the outdoors. Sioux City is famous for Sue Bee Honey and was the original location of Gateway Computers’ headquarters. Sioux City is also one of the few places in the world where you can see Loess hills, a natural formation that only exists in Iowa and Shaanxi, China.

Iowa is located in the region known as tornado alley, an area where tornadoes occur with the highest frequency. Tornadoes are a common problem for trees in Sioux City. Even minor EF0 tornadoes can break branches and damage trees. Over a 45-year period, Iowa experienced an average of 31 tornadoes each year.

While a majority of tornadoes are relatively weak, even in tornado alley, there can be some tornadoes above EF3. These tornadoes have high wind speeds nearing and exceeding 200 miles per hour. Powerful tornadoes can uproot trees, snap trunks, and debark trees. Tornado damage is a common reason our customers call us for tree removal in Sioux City.

Bur oak blight is a disease that causes the browning of leaves and defoliation in bur oak trees. It is caused by a fungus and may be fatal for affected trees. Bur oaks are the second most common tree in Iowa, making bur oak blight a major problem statewide.

At least 87 counties in Iowa are affected by the disease, including Woodbury County. If you suspect bur oak blight, contact our tree removal specialists in Sioux City. We can treat your trees and ensure the disease does not spread.

Chlorosis is a common disease affecting pin oaks and other trees due to a lack of nutrients in the soil. Common symptoms of the disease include pale or yellowing leaves, curling, and brown spots on leaves.

The clayey soil in most of Iowa is not suitable for some trees such as sweetgum, crabapple, silver maple, and pin oak. Soil is a leading cause of chlorosis in Sioux City. If you suspect chlorosis, our specialists may be able to increase the nutrition in your soil to save the tree.

Does Sioux City Provide Any Assistance in Tree Removal Problems?

If a tree falls on a city street or right of way, Sioux City Public Works can remove it. The street maintenance crew clears and maintains the roads to improve safety for drivers and pedestrians.

The city is also responsible for the public parks, and they regularly remove dead, tipping, or fallen trees in public parks. If the tree is on your property or any other private property, the city will not likely be able to help you.

Who Is Responsible for Fallen Tree Removal in Sioux City?

As a renter, you are typically only responsible for keeping the premises clean and well maintained. A tree typically falls into a common area of the rental property and is considered a major repair. Unless your rental agreement or lease agreement states that these sorts of repairs are your responsibility, your landlord will typically be responsible.

If you see a dead, tipping, or fallen tree, alert your landlord immediately. The landlord should respond promptly, especially if the fallen tree causes damage or presents a hazard.

As a landlord, you are responsible for tree removal from your rental properties in most situations. It is the landlord’s obligation to keep the rental property fit for tenants. This means making repairs and maintaining a reasonable level of safety. When a tree falls into a common area like a walkway, driveway, or patio, it is your responsibility to remove it. Any damage should also be repaired, especially roof damage and other hazards.

When a tenant notifies you of a dead, tipping, or fallen tree, you should respond in a reasonable amount of time. You are not likely responsible for tree removal if the tree is damaged by the tenant or guest of a tenant.

As a neighbor, you are responsible for trees on your property–much like a homeowner. If a tree’s roots or branches reach over to your property from an adjacent property, you are permitted to trim them based on Iowa law.

How Does the Soil Affect Trees in Sioux City?

Being part of the Loess Hills, Sioux City has a unique soil consistency. Loess is easily eroded, giving the hills their distinct look. Loess is also prized in the agriculture industry and has porous, gritty, and tightly packed characteristics. Loess can be ideal for growing a variety of trees.

Droughts can be prevalent throughout Iowa and can have a severe impact on the health of your trees in Sioux City. With seasonal dry weather and almost yearly moderate to severe droughts, caring for your trees can be a necessity.

Trees that are not adapted to dry climates can become extremely weak during droughts, making them susceptible to insects, disease, and fungus. It is critical to provide your trees with nutrition and watering during dry weather. Our tree experts in Sioux City can help you decide on a tree that will withstand drought and dry conditions.

What If Dead Trees Are Near Power Lines in Sioux City?

MidAmerican can also provide guidance for planting near the power lines. The tree you choose to plant should meet certain height requirements to not cause problems in the future.

How Much Does Tree Removal Usually Cost in Sioux City?

Tree removal in Sioux City costs between $200 and $2,100 in most cases, with an average of $780. Three major cost factors influence the price of our affordable tree removal service in Sioux City.

The size of the tree has a major impact on the cost of our removal service. Taller or wider trees are typically more difficult to remove than smaller trees. They require greater precautions to avoid the tree falling in an unintended direction and prevent large branches from falling and causing damage.

Trees with a wider trunk take longer to cut and can make disposal and transportation difficult. Cleaning up after a large tree can also take more time, resulting in a more costly tree removal service.

The location of the tree is a critical factor in the cost of our service. Removing a tree from a location with few people and obstacles can be less expensive than removing a tree in a more congested location.

Obstacles like power lines, structures, and vehicles must be protected from fallen debris during removal. Pedestrians, traffic, and children playing nearby must also be kept at a safe distance during our tree removal service.

The condition of the tree also affects the cost of tree removal in Sioux City. A standing tree will almost always be more costly to remove than a fallen tree. It takes more time to remove standing trees and requires more preparation to avoid risks.

Trees typically require removal due to a pest infestation, disease, or fungus. Trees with an active infestation, disease, or fungus can also be more costly to remove than trees that died of natural causes. We take careful steps to avoid spreading the ailment to other trees, treating the nearby trees before or after the removal. Some pests and fungi also require careful containment of the debris to avoid contaminating other trees and the removal of damaged roots.

Recent Requests We Received From Customers In Sioux City, IA

Lost a tree in the wind and broke it in half need someone to cut it the rest of the way down and remove it.

Looking to Plant a couple of Trees in our back yard for shade. How big are the Trees you are able to plant?

I cut out several pines over the winter. Approx 50 stumps to be removed in our yard. 2 acre lot. Thanks!

I need a quote on removal of a tree in my back yard.

Looking for a bid on trimming the trees at my home.

Quote on cutting a tree down and stump removal.