Looking for affordable tree removal service in Locust Grove, GA? Great! TreeTriage is at your service 24/7. 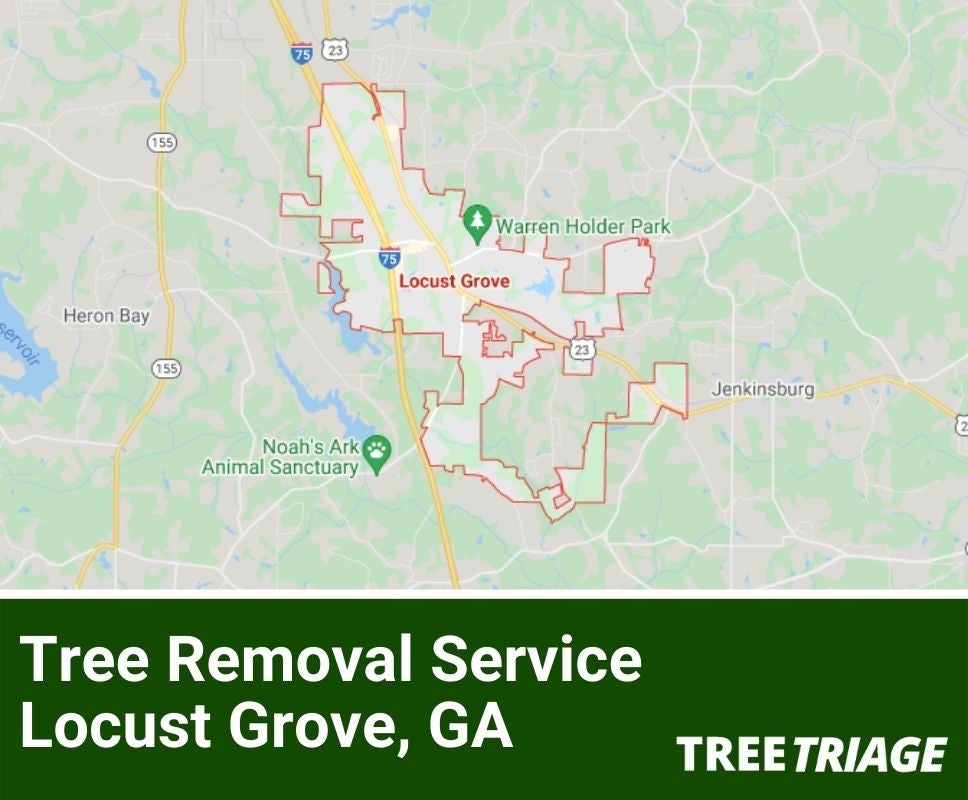 Tell us about your project in the form and we'll get you connected with specialists in or continue reading to learn what you should consider when removing a tree in Locust Grove.

What Are the Most Common Tree Issues in Locust Grove?

Trees in Locust Grove have a few potential threats to look out for, though the great irony is that those threats rarely include actual locusts among their ranks. In terms of pests that populate the region, the Asian citrus psyllid (Diaphorina citri) can be a major problem for citrus trees. These bugs feed on sap from the plants and spread citrus greening disease which can cause major negative effects on both the fruit and the trees themselves. With that said, they generally don’t pose a threat to other types of trees.

Termites are another potential hazard, particularly when it comes to dead trees. Dead trees left to rot pose many risks on their own, including as homes to things like rats as well as carriers of tree diseases. If you see dead or dying trees out in the wild, report them to the local government early so they can be dealt with in the most efficient way possible.

Natural disasters and bad weather might also be a danger for trees. Thunderstorms are fairly common and can get severe in summers, though flooding is more rare but still possible. Both of these things can harm trees for reasons ranging from destruction by lightning to fast-moving water to eroding the soil around their bases. Locust Grove is also considered high-risk for tornadoes, which can uproot trees and destroy them with flying debris. In line with this, the strongest tornado that ever reached the town was in 1964 and resulted in only a single injured person and no fatalities, so the odds of weathering that storm seem fairly high whether you’re a tree or a human.

Does the City of Locust Grove Provide Any Assistance in Tree Removal Problems?

Locust Grove does not offer any sort of assistance to residents who need a tree removed from their property. If you see a tree on public land that’s dead, dying, or just having some problems, call the local government offices at 770-957-5043 to report it.

While the town maintains the trees on public property like its parks, in most situations, those who own land are in charge of removing their trees. You’ll have to enlist our help to get one removed from your lawn.

Who Is Responsible For Fallen Tree Removal in Locust Grove?

Understanding who’s responsible when a tree falls can save you a lot of money and a few headaches. Deciding who’s on the hook for removing it doesn’t always seem that simple, but if you can remember a few details, it shouldn’t be a problem. Here are some common scenarios and how they would likely play out after a tree falls.

If you own the land a tree is on, that makes you the owner of that tree. As a result, you’re responsible for the tree if it falls over. Locust Grove officials won’t remove your tree from where it’s fallen, so it’s going to be up to you. If you aren’t looking forward to paying for that, though, check your insurance policy first. Depending on what it contains, some homeowners may have their removal costs subsidized or fully paid for through their insurance.

Unlike homeowners, renters don’t own the land they live on. That means they are not responsible for any of the trees there. If a tree were to fall on the lawn connected to a place you rent, you’ll have to call your landlord and have the tree removed. As outlined by Georgia law, landlords have to keep rental properties safe and habitable for their renters. Considering a fallen tree rotting on the lawn wouldn’t be safe or habitable, they’re on the hook for taking care of the problem. The exception to this would be if you were to do something that caused the tree to fall over (cutting it down, for example), you’d likely face some penalties for destruction of property.

Like we mentioned before, landlords are responsible for keeping a tenant’s space safe and habitable. This, combined with their similar ownership of trees on a property they own like a homeowner, means that landlords will have to have any fallen trees removed from their property. Also like a homeowner, many insurance policies will cover tree removal for rented properties to help soak up some of the cost.

Property disputes with neighbors are generally the most complicated fallen tree situations. Ownership of a tree falls to whoever owns the property where the trunk is planted. Note that the law specifies the trunk, meaning branches hanging over the fence of some roots poking up underneath it do not mean that the tree is any less yours. If this is clear-cut and only one of two people owns the tree, just apply what we’ve covered before for homeowners or renters. If, however, a tree’s trunk has grown past the property line and into a neighbor’s yard, that means it’s joint property. In that situation, you might have to come to some kind of agreement with whoever jointly owns your tree about paying for removal expenses. As long as you talk about it, you should hopefully reach a fair agreement on this and be done in time for the next cookout.

How Does the Soil Affect Trees in Locust Grove?

Based on the Henry County soil survey (which includes Locust Grove), the soil in the area is largely well-drained to somewhat poorly-drained and composed of loam and clay (more clay than loam). This makes the land a great place to grow trees like magnolia, hawthorn, or even locust trees where the town takes its name. Planting trees with deep roots is a good idea given the potential for flooding in Locust Grove, as well as the fact that trees that grow deeply can reach more nutrients in the compacted clay soil.

Like many places in Georgia, Locust Grove has hot, humid summers and warm, dry winters. Additionally, the area can sometimes experience cold snaps in the winter, leading to overnight freezes. Trees freezing can cause a ton of root problems, especially if those trees aren’t suited to surviving in the cold, to begin with. Any trees planted here will need to be able to adapt to the heat as well as the potential freezing climate during colder months.

As mentioned before, thunderstorms are common in Locust Grove. These can sometimes result in flooding. Tornados are possible to happen anywhere in Georgia with the town being no exception. Similar to the above stated, the tornados that hit Henry County generally weren’t that bad and did little to harm the people or trees in the area.

What If Dead Trees Are Near Power Lines In Locust Grove?

Dead trees underneath power lines pose a serious risk to public safety. A little over a decade ago, large portions of southern Georgia were consumed by a Bugaboo Scrub Fire partially caused by a downed power line. To avoid this from happening again, clearing major hazards from around lines is important, which includes dead trees.

If a tree that belongs to the town were to die beneath a power line, it would be the town’s responsibility to have it cut down and potentially replaced. While workers would hopefully notice this before it becomes a problem, you can report dead trees to the local government.

If a tree belongs to you and happens to die under a power line, it would be your responsibility to call us to remove it as quickly as possible. Ideally, though, you shouldn’t allow a tree to grow underneath any power lines, to begin with, let alone allow it to get tall enough to potentially touch them.

How Much Does Tree Removal Usually Cost in Locust Grove?

The cost of removing a tree in Locust Grove averages around $675, with prices ranging from as low as $200 up to or over $1,890. Prices can change fairly and dramatically depending on several factors. Some of them are listed here to help you fully understand a potential bill.

Calling us for an emergency job tends to cost more than a standard scheduled appointment. Mobilizing our crews on the weekends, on holidays, or after working hours is a hassle even on the best of days. In addition to emergency service fees, you might also be paying for overtime hours during these cases.

Tree size might be the most important factor that affects the removal costs. As you might expect, larger trees are harder to remove. Not only do they require more planning for a safer removal, but they also use more of our crew embers, more equipment, and more time. All of these things can raise the price of the removal.

Tree removal and stump removal aren’t the same thing. While they might sometimes be bundled together, removing a stump presents its challenges and is often paid for separately. Expect $150 more on your bill to take the stump away along with the rest of the tree.

Recent Requests We Received From Customers In Locust Grove, GA

Two palm need skinning from ground level up 10 feet. easy access. No timing of palm prawns at this time.

Buyers for property have requested Mesquite tree be trimmed prior to closing.

Two stumps approx 8-10 inch palm trees are chopped down next to pool.