Looking for affordable tree removal service in Conyers, GA? Great! TreeTriage is at your service 24/7. 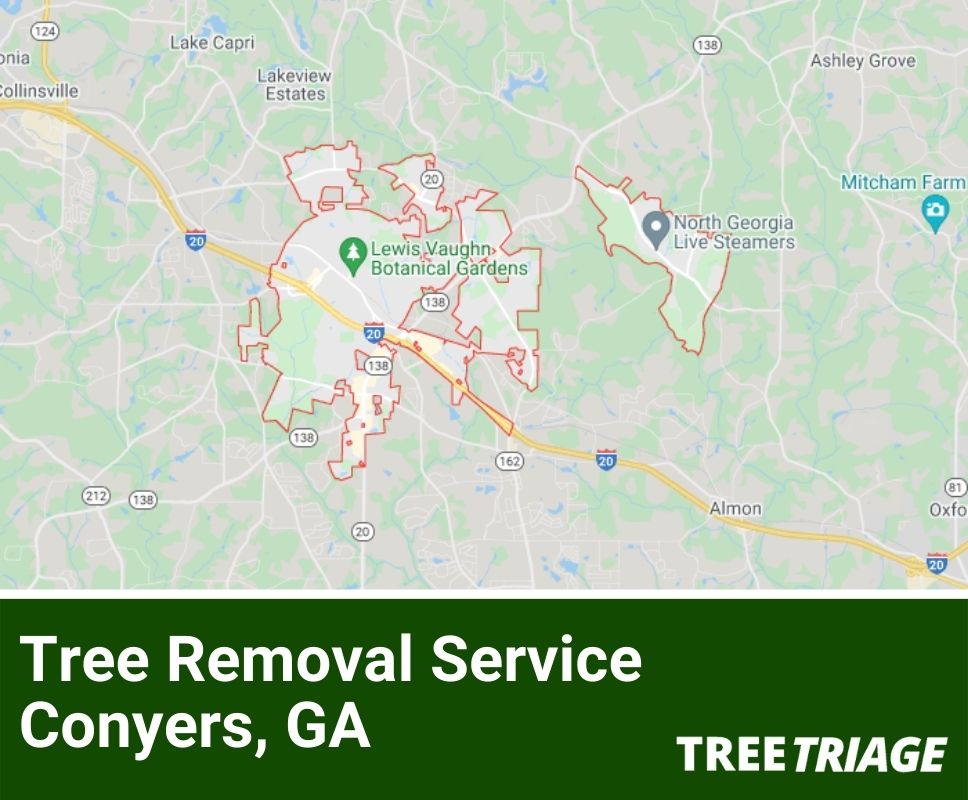 Tell us about your project in the form and we'll get you connected with specialists in or continue reading to learn what you should consider when removing a tree in Conyers.

What Are the Most Common Tree Issues in Conyers?

Conyers and Georgia, in general, have their fair share of invasive and non-native trees. The Bugwood Center for Invasive Species identifies the Nepalese brown top, Chinese privet, and the Chinese wisteria as some of Georgia’s most invasive tree species.

Another invasive pest in Conyers is the emerald ash borer. Known as a tree killer, this insect was first recorded in 2002, ravaging ash trees by the millions in Canada.

Its long-awaited arrival was cut short in 2013 when an article confirmed fears of its discovery in neighboring Dekalb County. From there, the emerald ash borer infestation has been feared to spread into Conyers and the rest of Georgia.

In Conyers, known pests are far more dangerous than invasive trees and unknown species. These are the grubs, borers, ants, and termites that can be found on almost every tree in Conyers and Georgia at large.

Conyers has a lot going for it, but perennial calm weather is not one. According to a hail tracker, Conyers has received severe weather warnings 15 times in the last 12 months. Seemingly, trees on roads and people’s backyards are one hailstorm away from falling. In fact, an article shows the path of destruction across Conyers in one of its largest storms in recent history on June 2020 before Hurricane Sally. It left fallen trees across houses on roads and power lines.

Does the City Of Conyers Provide Any Assistance in Tree Removal Problems?

Like many other cities, Conyers has a code of ordinance that outlines the relationship between its residents and its trees.

The tree ordinances outline specific legal requirements and regulations to be met during tree planting and removal, including:

Like many other cities in Georgia and the country, the city is responsible for the removal of public trees. According to the Georgia tree ordinance found here, a tree is considered a public tree if it is:

If a tree is located between your Conyers street and the sidewalk, it is owned by the city. Since tree ownership is decided by where the trunk lies, in such a case, it’s the city’s responsibility to remove a fallen tree.

In the unlikely case that the city or state removes a tree from private property, it may be for unique reasons such as the tree being an immediate public safety concern or standing in the way of the operation of the city.

Who Is Responsible for Fallen Tree Removal in Conyers?

When it’s not the city’s responsibility to remove a tree, who does this role fall on? Is it the landlord, tenant, or the real estate company that owns the home?

If the tree trunk is entirely in your neighbors land, the tree belongs to him regardless of whether a part of the branches, leaves, fruits, and canopy are on your property.

If the trunk of a fallen tree is entirely in your Conyers home or private property, it’s almost 100% assured that you are responsible for the removal of the tree. However, damages or injuries due to a fallen tree on your property are not always your responsibility.

The same case applies if your private property is close to stormwater management systems.

According to Chapter 11 of the Conyers GA code of ordinances, a private property owner is responsible for the removal of dead or fallen trees around detention basins, retention ponds, and other stormwater control devices. This applies to dead trees with a diameter of fewer than 12 inches.

Georgia law is clear that the responsibility of a fallen tree lies on the property owner. This law excludes Conyers renters from accidental tree falls in properties where they reside.

However, rental contracts vary. In some cases, businesses and individuals can rent homes and property in Conyers long-term (for five, ten, or twenty years). There may be provisions in the lease agreement regarding tree maintenance that shift responsibility to the renter or tenant in such a case.

Another circumstance that may make the tenant liable is if the property owners can prove that the fallen tree resulted from the renter’s negligence.

Conyers and almost every city in the country places the responsibility on the tree owner or the property owner. In all cases, that is be the landlord.

The landlord is responsible for every single tree whose trunks are entirely on their property. This means that the maintenance, removal, and trimming of trees is your responsibility.

However, during storms and accidents in Conyers, it’s your homeowner’s insurance that will cover most of the damage resulting from the tree falling.

In some circumstances, as a neighbor, you can share in the ownership of a tree. If the tree trunk falls on the property line, making the tree a boundary tree, it is considered joint property.

In Conyers and many other US cities, the responsibility for a boundary tree is shared between the two neighbors.

However, any tree that is not a boundary tree is not your responsibility as a neighbor. This is regardless of whether the canopy or shade of that tree is within your private property.

How Does the Soil Affect Trees in Conyers?

According to the University of Georgia, most of the soil around the state is low in pH and lacking in one or two major minerals.

Soil that is low in pH leads has a significant effect on trees. If you find pines in your Conyers neighborhood with yellowed, broken, and flecked leaves, it’s probably because of the low soil pH that often goes untreated.

Moreover, soils with low pH such as those in Conyers may release aluminum. This mineral results in stunted root growth, which means that trees are susceptible to strong winds during storms such as hurricane Sally.

The Georgia Soil and Water Conservation Commission also note that Georgia’s topsoil has eroded significantly for the past two decades. That, compounded with climate change and storms, makes it hard for trees to hold during storms.

Georgia is known for its moderate weather with four seasons. However, winter in Conyers may not be as kind to the coniferous trees that grow there.

During winter, coniferous trees and pines in Conyers are susceptible to browning and desiccation. In an article, the University of Georgia outlines that cold weather leads to cold injury, especially for young pecan trees.

This cold injury may range from longitudinal bark splitting and sparse development of canopy to the separation of bark from wood. Additionally, developing foliage on these pecan trees in Conyers will get burnt if exposed to cold weather for three hours or more.

What if Dead Trees Are Near Power lines in Conyers?

However casual the conversation about falling trees may seem, it’s always crucial to remember that falling trees are dangerous and a public safety hazard, especially when power lines are involved.

A News11 article reported a sad incident in nearby Douglasville where a falling tree and power lines fell on a man’s car, resulting in his untimely death, which makes us wonder what happens when a dead tree falls on a power line.

If a dead tree falls on a power line and is an imminent danger in Conyers:

How Much Does Tree Removal Usually Cost in Conyers?

In Conyers and Georgia, you require a permit from the state before removing a tree that is yet to fall. According to the Conyers tree ordinance, any hardwood tree species with a diameter larger than six inches requires a permit to be cut down.

Similarly, any pine tree with a diameter larger than twelve inches require a permit for our tree professionals to uproot them.

Once you have your permit and documentation sorted out with the Conyers authorities, getting your tree removed will depend on a lot of factors:

Trees are not created equal. Softwoods such as pine will be cheaper to have removed than hardwoods such as oak.

Similarly, trees do not grow to be the same height and width. That said, the taller the tree in your Conyers backyard, the more expensive it is to remove.

Your dead Conyers tree can fall anywhere. If it falls on your backyard without hitting anything, it won’t be very expensive to remove that tree.

Sadly, the same cannot be said if the tree fell on your neighbor’s house or the nearest power lines. Removing those trees will be costly.

Recent Requests We Received From Customers In Conyers, GA

Have a few tress I deem critical to be removed that threaten the residence, one of which looks to be dead and leaning over home. I do not answer calls I don't recognize the number so email or text me first with your number.

Hi, I am looking for someone to prune my flowering trees. 1 Magnolia, 2 dogwoods. Maybe some others depending on your opinion. Thank you.

Approx. 25 foot pine tree cut down. Maybe 3. But, I would like to know the prices, ahead of time. Thank You!

Need a free quote on Cut a big and tall tree and grind.