Looking for affordable tree removal service in Winter Garden, FL? Great! TreeTriage is at your service 24/7. 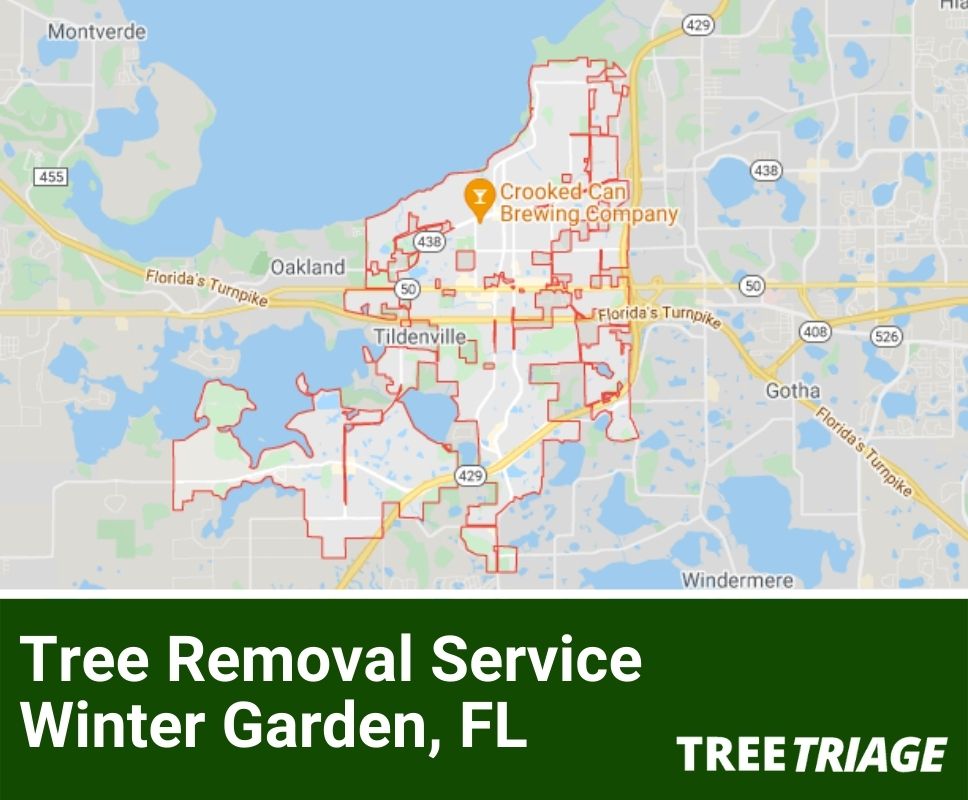 Tell us about your project in the form and we'll get you connected with specialists in or continue reading to learn what you should consider when removing a tree in Winter Garden.

What Are the Most Common Tree Issues in Winter Garden?

Tree issues that might pop up in Winter Garden, FL are quite similar to those that might appear in other areas of the state. There is a great breakdown of what those types of issues are and how they impact trees on the Florida Department of Agriculture and Consumer Services. It breaks down the types of diseases that most trees in the area experience into a handful of categories. Those include foliage diseases, stem diseases, root diseases, and degenerative diseases. Any of these types of diseases can potentially strike at a tree in Florida, and it is worrisome, to say the least, as they are delicate resources that we all must respect and nurture as much as we can.

Fusiform rust is one type of disease seen throughout the various species in the state of Florida. It is known as the most serious and the most potentially deadly of tree diseases found in the Southeastern portion of the United States. It is caused by a fungus known by its scientific name as Cronartium quercuum. It is important to try to spot this disease in the tree as rapidly as possible to make an attempt to save it. Keep an eye out for blisters on the tree that appear yellow or orange as a potential sign of trouble. Additionally, you will want to look for rust-colored spores to appear, as well. These can also be a sign of trouble.

Another concern for the trees in Florida is the pests that can feast on those trees and kill them off just as quickly as some other things. For example, it is not unusual for a group of pine bark beetles to go after a tree and zap it of its natural resources by taking what they want from it for themselves. These are small insects, but they tend to work in large groups, and they are extremely damaging when they get together like that. They tunnel into the bark of trees to lay their eggs, and then their offspring hatch and begin to eat from within the tree. The tree can be quickly taken out as a result of this activity. There are ways for humans to fight back against these insects, and all measures should be taken to try to save the trees from their demise.

Does the City of Winter Garden Provide Any Assistance in Tree Removal Problems?

The city government in Winter Garden, Florida is not in the business of assisting residents with the removal of trees from their property unless there is an emergency situation that they need to step into. It is far more common that the residents are asked to seek out their own provider of this service to receive the help that they require. The city government is not at all interested in getting involved unless they have to.

The federal government provides programs encouraging people to plant more trees, but the removal of trees is considered something that one may do to enhance the value of their personal property, and thus, it is no business of the government to step in to help. That said, if the tree that is to be removed seems to pose a threat to the safety of the public in Winter Garden as a whole, then it is possible that the government will do something to get this taken care of. In this scenario, the price that the homeowner will pay for the removal service is likely much higher than if they had simply hired a private company like Tree Triage to take care of it before it escalated to a problem of this size.

Who Is Responsible for Fallen Tree Removal in Winter Garden?

Renters have rights in the state of Florida that protect them from having to take care of a fallen tree. They are responsible for paying their rent on time and taking care of some basic upkeep to keep the property livable, but you will not have to worry about removing a tree that has fallen. If your landlord pressures you to do this, you should refer them to the tenant’s rights part of Florida state law that protects you.

Landlords have to assume responsibility to remove a tree that has fallen on the property because they are also the homeowner. However, property managers who merely manage a property for a homeowner can avoid having to shell money out of their own pocket to take care of this type of thing. They will probably be the ones to place the call to our removal team, but they are not going to have to actually pay for the service themselves.

The frustration level is sure to mount if you are a neighbor and a tree that isn’t yours falls onto your property. You might be so angry that you become tempted to pay for the removal of the tree yourself. However, you should try to take a step back from that ledge and realize that, in reality, you are not the one who is responsible for taking care of this. The homeowner (aka your neighbor) needs to do it. In fact, they might even be responsible for damages caused to your property from their tree falling over.

How Does the Soil Affect Trees in Winter Garden?

The soil quality impacts how trees grow no matter where they are. The same is true in Winter Garden. The city has the same sandy soil that most of the entire state does. This is great for the classic palm trees that Florida is so proud of, but it doesn’t work for every species. Trees that require incredibly sturdy soil to root into may be out of luck in Florida. Unfortunately, the soil does not hold up as well as some other types of soils from other areas.

Despite the name Winter Garden, the city actually enjoys a very warm and generally tropical style climate with the average temperature throughout the year at a very comfortable 71 degrees. The weather is, thus, of no concern as far as trees dying from freezing, but they can potentially get overheated during the summer months. It is very important that they receive plenty of water during the summer months in particular. Fortunately, the frequent rains that much of the state of Florida enjoys tend to take care of this naturally, but homeowners should try to pay mind to the fact that their trees may require additional watering during this time.

Another item worth noting as far as weather is concerned in Winter Garden, Florida is the fact that the tropical climate can be a major attractive element for the types of pests that attack the trees. They are difficult to get rid of as they thrive in these warm and moist environments. It is worth educating oneself on the various pest threats and how they might be neutralized when possible.

What If Dead Trees Are Near Power Lines in Winter Garden?

One of the worst possible scenarios for a tree that is falling down is to also have to worry that it might topple over into power lines. People don’t always think about this, but the reality is that even one tree tipping over into power lines could mean lights out for several blocks worth of houses. Thus, the city is very adamant that people keep their trees trimmed and away from power lines as much as possible. However, there are scenarios that are simply impossible to avoid. If a tree appears to be dying and about to fall into a power line, the city should be notified immediately. They will need to send out an emergency crew of workers to cut down the tree and prevent it from causing major damage. You might have to pay up for this, but it is better than being charged fines for not reporting the tree falling over and having to pay stiffer penalties in the future.

How Much Does Tree Removal Usually Cost in Winter Garden?

Most tree removals in Winter Garden will cost between $175 and $1,900, with an average of around $625. There are some factors that will influence your total.

Different cities and counties throughout Florida have sets of protected species of trees that they do not permit to be removed or at least severely limit the number of trees that are allowed to be removed. If the type of tree that you are looking to have removed is one that is limited by Winter Garden, then you could see a much higher cost for its removal. We will likely need to seek special approval to do so, and this could make it a lot more costly for you to get that tree removed.

Our hourly rates are in line with the national average. Large jobs that take more time, however, will naturally cost more because of the greater time spent working on your tree.

Finally, you need to know that you will pay more if you require faster emergency service. We have entire lists of people waiting to receive our services, and we can move you to the front of the line, but only if you are willing to pay a premium for that service. Try to handle your tree removal problems before they become more urgent and expensive as a result.

Recent Requests We Received From Customers In Winter Garden, FL

Trim about one foot off crepe myrtle(one on either side of driveway)Now they are about 8' tall.Trim poor little peach tree. It is half dead limbs but tried to bloom/needs dead growth cut out.It's about 8' by 3'wide.

We have an avocado stump that I attempted to remove and decided we need professional help.

My patient who is elderly and disabled needs a tree removed in front lawn.