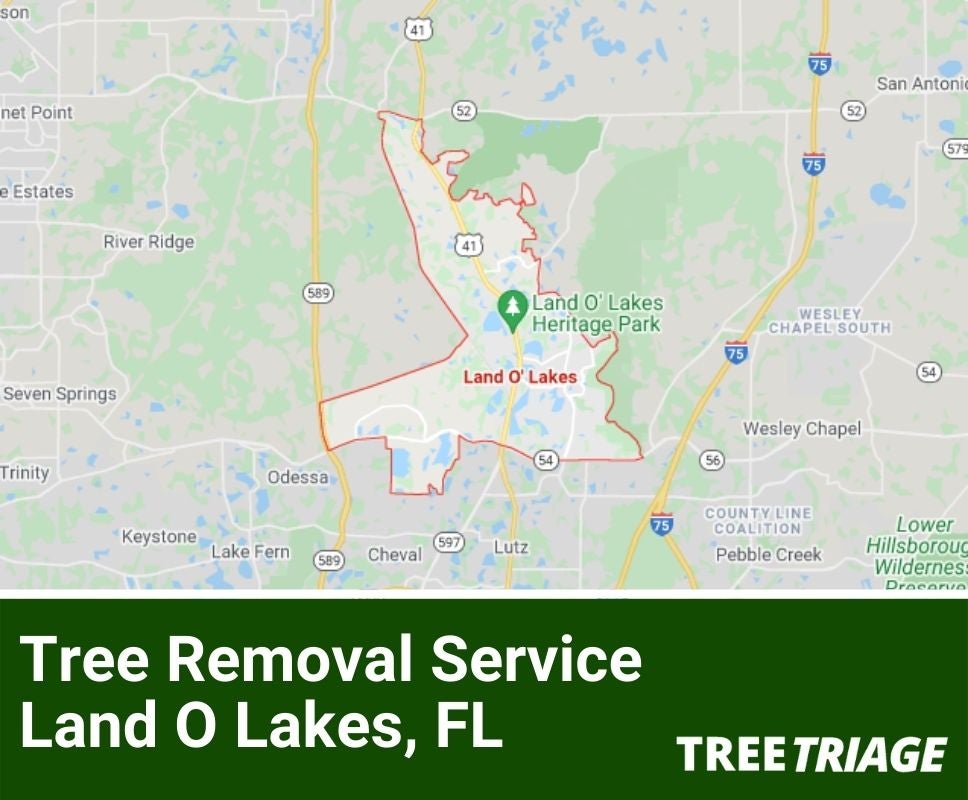 Tell us about your project in the form and we'll get you connected with specialists in or continue reading to learn what you should consider when removing a tree in Land O Lakes.

What Are the Most Common Tree Issues in Land o’ Lakes?

The humid, subtropical climate in the Land o’ Lakes area is home to many tree species, including varieties of ash, maple, oak, and various flowering trees. In addition to these common hardwoods, the area also produces Cypress, Southern Red Cedar, and a wide range of palm trees. Unfortunately, palm trees in Land o’ Lakes are particularly susceptible to several common issues.

Lethal yellowing is a viral-like disease that affects mainly coconut palms but can have an impact on other species, as well. The disease is primarily spread by leafhoppers, several species of tiny insects known for their ability to jump from leaf to leaf. The condition causes mature palm fronds to yellow and die, beginning from the lower fronds and moving upwards. Lethal yellowing spreads fast but is treatable with antibiotics if the condition is diagnosed early.

The palm leaf skeletonizer, a Florida native, has a life cycle that starts as an egg before becoming a caterpillar, pupa, and finally, an adult moth. The insect does most of its damage during the caterpillar stage, where they feed individually or in groups on the upper and lower surfaces of many palms. The caterpillars prefer the tissue between the veins or ribs of the leaf, leaving behind the bare skeleton of the leaf, but will sometimes feed on the leaf stems, destroying the vascular structure and causing the frond to die. While mainly the damage is an aesthetic issue, causing the palm fronds to brown and even die, healthy palms can survive the damage.

Ganoderma is a difficult-to-diagnose, fatal palm disease that is incurable and unpreventable. The condition is caused by a fungus that affects all palm species, degrading the essential structural materials in the lower four to five feet of the tree trunk. Caused by the fungus Ganoderma zonatum, the disease does not cause soft rot, so the tree trunk seems solid and healthy.

Symptoms of Ganoderma include wilting and a general decline in the health of the tree. The disease can only be confirmed by the growth of a hard shelf-like structure called a conk on the lower part of the trunk as the tree nears death or the discoloration found inside the trunk after cutting down the palm tree.

The fungus is spread by spores released by the conk that can survive in the soil. For this reason, our tree experts recommend you remove an infected tree immediately after a conk appears on the trunk, including as much of the stump and root system as possible. Little is known about the conditions that cause Ganoderma. There is no known treatment, and it is not recommended to plant another palm in the same area without taking special precautions to safeguard the tree’s health.

In addition to pests and diseases, Land o’ Lakes trees are also vulnerable to severe weather conditions. The area receives about 52 inches of rain annually, with most of it falling during a rainy season that lasts from May to September. Land o’ Lakes’ location between the Gulf of Mexico and the Atlantic Ocean means that the rainy season brings plenty of thunderstorms with heavy rainfall and high winds.

Does the City of Land o’ Lakes Provide Any Assistance in Tree Removal Problems?

While Land o’ Lakes does not provide any direct assistance with tree removal from your property, Pasco County has a very comprehensive tree policy in place. Most tree removals in Land o’ Lakes require a county permit, with the exception of many invasive species. Generally, removing any tree with a trunk diameter of five inches or greater at breast height will require a permit. Additionally, many homeowners associations in the area require approval before removing a tree.

Who Is Responsible for Fallen Tree Removal in Land o’ Lakes?

Who is responsible for removing a fallen tree in Land o’ Lakes is sometimes confusing. Generally, the cost of removal falls upon the property owner, regardless of whether the tree was growing on someone else’s property or your own.

As a homeowner in Land o’ Lakes, you are responsible for removing any fallen branches or trees on your property. While homeowner insurance policies differ, they often will not pay for removing a tree if it does not involve property damage. If a tree falls on your property and causes damage, your insurance may compensate you for any damage you incur and include the tree removal.

If you are a renter in Land o’ Lakes, the owner or manager of the rental property is responsible for removing a fallen tree. If the tree causes any damage to your property, typically, your rental insurance will compensate you. While landlords are not usually responsible for a tenant’s property damage, if the fallen tree was known to be diseased or dying, they may be liable for your damages.

If you are a landlord in Land o’ Lakes, you are responsible for removing any fallen trees on your rental properties and may be held liable for any damage the tree causes. Landlords must inspect and monitor the health of trees on their property to ensure the safety of their tenants and limit their liability in the event a tree or large branch falls and causes property damage.

If you are a neighbor and a tree or large branch falls on your property, you are usually responsible for the removal. Removal costs are typically your responsibility whether the tree falls from neighboring private as well as public property. The exception is if the tree causes property damage, interferes with your ability to use your property, or is known to be diseased or damaged and, therefore, a nuisance.

How Does the Soil Affect Trees in Land o’ Lakes?

Like most of central Florida, the soil found in Land o’ Lakes is sandy. While several tree species, like red oak, white cedar, and pines, grow well in sandy soil, this soil is typically less fertile than other soil types. Sandy soils have large gaps between the particles, which allow water and nutrients to drain away quickly. Fast draining sandy soil has a low moisture and nutrient content that requires frequent fertilization and watering to maintain healthy plants and trees.

Tropical storms and hurricanes are significant causes of tree issues in the Land o’ Lakes region. Hurricane-force winds can damage even the healthiest tree, and diseased or damaged trees are particularly vulnerable. High winds can topple a tree or bring down large branches, which may take years to recover.

Florida is also known as the lightning capital of the world, with many trees in the Land o’ Lakes region struck every year. Palm trees are especially vulnerable to lightning strikes because they are often tall and have only one growing point at the top, which, when damaged, causes the tree to die. A lightning strike can cause bleeding, burn marks, a collapse and sudden browning of the canopy, and even kill the tree instantly.

What If Dead Trees Are Near Power Lines in Land o’ Lakes?

The county’s natural resources protection plan gives utility companies some leeway for protecting overhead and underground utility services. Still, it limits the utility company’s ability to remove trees that are 18 inches or greater in diameter and requires them to perform pruning and trimming in accordance with American National Standards Institute (ANSI) 300A 2001.

How Much Does Tree Removal Usually Cost in Land o’ Lakes?

Tree removal in Land o’ Lakes can vary widely due to several factors. In addition to the basic costs of labor and equipment, the size, accessibility, and health of the tree also impact removal costs. Most trees run between $175 and $2,200 to remove.

Probably one of the most apparent cost factors of removing a tree is the size. While a small ten or fifteen-foot tree can often be removed quickly with little mess to clean up, a thirty or forty-foot tall tree with a large canopy takes substantially more time and work for our team to remove. Additionally, a large tree presents a much greater safety risk to our crew members.

The location is also a significant factor in the cost of removing a tree. While a tree in an open area can typically be dropped easily by our experienced arborists, working near power lines, houses, or other structures requires extreme caution to protect property. A situation like this may require additional labor or specialized equipment to remove the tree safely.

Finally, the tree’s general health also affects the cost of removal. Removing a dead, diseased, or dying tree presents unique safety issues due to the unknown health of the tree. An unhealthy tree can often crack or splinter uncharacteristically, while it is usually easy to predict how a healthy tree will react when cut.

We have 4 taller trees and 1 smaller tree that needs to be removed and stumps ground out and some shrubs.

One large tree removed and one med.