Looking for affordable tree removal service in Deltona, FL? Great! TreeTriage is at your service 24/7. 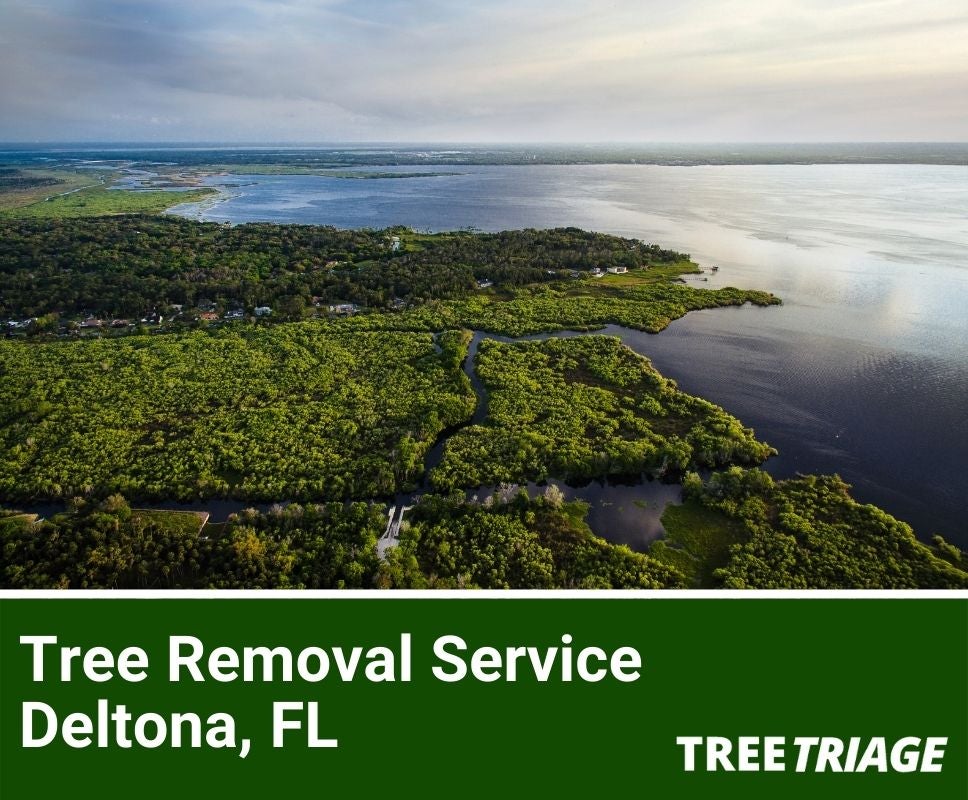 Tell us about your project in the form and we'll get you connected with specialists in or continue reading to learn what you should consider when removing a tree in Deltona.

What Are the Most Common Tree Issues in Deltona?

There are two foes that Deltona trees face–disease and weather events–and both are a pretty direct result of the subtropical climate of Volusia County.

It’s so damp and humid most of the year that our trees are vulnerable to fungi infestations, and the climate is so favorable that tree pests like it here, too. Our arborists are currently fighting off the laurel wilt fungus as it continues its march across Central Florida. Laurel wilt is introduced to red bay trees via the ambrosia beetle, which drills into the tree bark and spreads the fungus. This non-native fungus first showed up in Duval County in 2005 and hit Volusia around 2013. If you’re not sure what a red bay tree is, it’s a Florida avocado tree–the Florida Agriculture Plant Division has even started an online campaign to “Save the Guac” since native avocados are in danger.

Proactive tree owners can avoid laurel wilt by having our arborists inspect their red bay tree and treat the roots with a fungicide that will prevent the fungus from establishing itself in the tree.

Another common tree fungus, Hexagonia hydnoides, was the culprit that killed the historic live oak tree that has shaded the Volusia County Administration Building since the 1980s. The common name for this fungus is Hairy Hexagonia–not much more appealing, but it is a fungus–and it looks like a giant mushroom shelf growing out of the tree. It is a mushroom, just not one you’d want to put on your pizza. HH, let’s call it, is shaped like a big piece of pie with large spores and long black filaments like hair growing out of the spores. They’re saprophytic parasites, meaning they feed on the wood of a dead or dying host. HH spores are airborne and if they find a crack in a tree branch, they’ll settle right in and go about their business of killing a healthy tree.

These are just two of the tree diseases common to Deltona. HH isn’t the only mushroom fungus, and there are several other canker fungi that threaten local flora.

The impact of the weather on Deltona trees deserves its own section, so keep reading!

Does the City of Deltona Provide Any Assistance in Tree Removal Problems?

The city will remove dead or damaged trees that are in public rights of way and easements. Basically, any tree that presents a hazard to traffic or pedestrians is one that they will either remove or provide assistance for removal.

Who Is Responsible for Fallen Tree Removal in Deltona?

Florida law is pretty clear on this. Property owners are only responsible for damage caused by dead trees on their property–if you have a dead or damaged tree that falls onto your neighbor’s new truck, congratulations–you (or your insurance company) is buying a new truck. If the fallen tree was healthy and an “act of God”–a storm–knocked over a healthy tree, you’re off the hook. Your neighbor is even responsible for tree removal.

However, if your neighbor had told you that the tree was damaged before it fell, you’re back in the check-writing business for damages, and not your insurance company, since you had prior knowledge. It’s always a good idea to have your trees inspected and pruned back before storm season.

Generally, the landlord is responsible for removing dead or damaged trees, as it’s their property. You do need to notify them and make sure they deal with the tree before there’s further property damage.

You are responsible for maintaining your property, and ensuring there are no hazardous trees on-site falls into that category.

As we noted above, unless a healthy tree damages your property during a storm the tree owner has to pay for the damages and removal. If you noted a sick tree and notified the neighbor before the incident, the responsibility reverts back to the owner.

How Does the Soil Affect Trees in Deltona?

Not surprisingly, the soil in Deltona is sandy–15 to 20 feet deep before it turns into red clay. This sandy soil is why flooding is such an issue for the city; it gets saturated easily and has nowhere to run off to since the city is at sea level. Sandy soil is loose, like the sand on the beach, and trees can struggle to get enough nutrition from this type of soil. Soil amendments and fertilizers can help with tree health, but this is why you’re better off planting native species trees in Deltona, such as a native sycamore that can withstand the poor soil like a champ.

There’s always a trade-off in life, and for residents of Deltona, it’s the weather. Sure, it’s temperate–average yearly highs in the low 80s and lows in the 60s–but it is in that pesky subtropical zone that is great for the skin but smack in the middle of the Southeastern US storm alley. Since Deltona nestles between the Atlantic and the Gulf of Mexico, it’s situated for a double whammy every hurricane season. If you’ve lived in the area for more than a couple of years, you know that a tropical storm can be just as damaging for trees as a Category 3 hurricane. Few long-time Deltonans can forget the summer of 2004, when the eye of Hurricane Charley roiled directly over the city, the same year it took later sideswipes from Hurricanes Frances and Jeanne.

A powerful storm–from the garden-variety heat storms that are common on summer evenings to the dreaded Cat 5 hurricane–threatens trees from the roots upward. Trees are vulnerable to lightning strikes, high wind damage, and oversaturation of the ground. Ancillary damage from a tree that topples during a storm are cars, garages, and power lines.

Also, even though Deltona is miles inland, it’s so close to so many big lakes that a storm surge is another factor in tree damage during storms. Days of rain, combined with local flooding, can stress trees to the point they simply fall over from the roots.

One of the byproducts of a big storm is lots of humidity afterward–the perfect environment for those dreaded fungi to take hold in a formerly healthy tree.

What If Dead Trees Are Near Power Lines in Deltona?

It’s a fact of life in Florida that trees are planted near power lines and grow up to encroach on those lines. It’s another fact that those trees occasionally get damaged during a storm, and they either die or are so severely damaged that they need to be removed. When this happens, Florida Power and Light (FPL) will remove the affected trees. FPL contracts with local certified arborists like Tree Triage to remove trees according to standard arborist practices, so those unattractive V-cuts in your trees aren’t the county cheaping out, it’s how it’s supposed to be done.

How Much Does Tree Removal Usually Cost in Deltona?

Tree removal costs in Deltona tend to fall between $300 and $2,000, but there are many factors that go into pricing a removal job for you. Here are three of our most significant considerations:

The first factor is accessibility–how hard will it be to get to the tree? One that’s in the front yard by the sidewalk is easy; one that’s near the house and hanging over the roof is a lot more labor-intensive and therefore more expensive.

The size of the tree also matters–a tall, thin tree may look easy, but can’t support our crew members climbing it safely. Also, dense, thick trees like oaks or magnolias will take more crew and equipment to remove.

It’s counterintuitive, but a dead tree is more expensive to move. Our crews can’t safely climb the tree, and hollowed-out branches and trunk cavities mean that extra precautions are necessary to get the tree down safely.

Recent Requests We Received From Customers In Deltona, FL

Estimate for Pine taken down on back left corner of the house if your facing the house.

Removal of tree branches that overhang from neighbors yard that hang above our roof.

Front yard has a sycamore stump that needs grinding down below surface.

Hi. I am looking to have a pine tree cut down and would like a quote.