Looking for affordable tree removal service in Clearwater, FL? Great! TreeTriage is at your service 24/7. 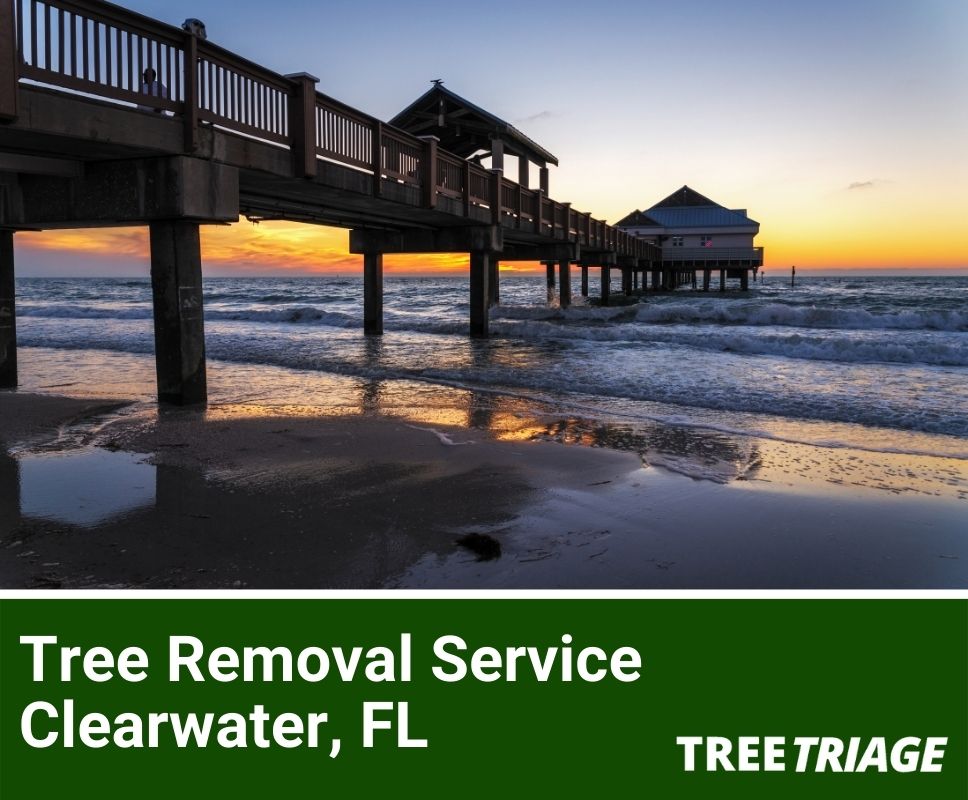 Tell us about your project in the form and we'll get you connected with specialists in or continue reading to learn what you should consider when removing a tree in Clearwater.

What Are the Most Common Tree Issues in Clearwater?

The treescape in Clearwater is vulnerable to mother nature on two fronts: weather and insects. Hurricane season is always a little scary for local homeowners, but the broader enemies are the pests that destroy trees by the hundreds every year. The subtropical climate here makes a fertile ground for all kinds of insects, and few trees are immune to all insects. These are some of the diseases and pests that cause severe or even fatal damage to local trees.

Leafhoppers are tiny insects that do just that. They hop from host tree to host tree and transmit a bacterium that clogs the tree’s watering channels. The infected tree’s leaves appear scorched when the waterways dry up. This disease is easy to spread and is fatal if the tree isn’t treated.

Poor drainage, compacted roots, and nutrient deficiencies–especially zinc and manganese–all contribute to trees being affected by chlorosis, which means the leaves aren’t getting the chlorophyll they need to survive. Yellow leaves are a sign of the disease, as are smaller and bitter fruits. Chlorosis is hard to battle in an environment that’s tailor-made for the disease, but routine fertilizing and soil maintenance will help trees fight it off. Chlorosis affects the following trees in Clearwater.

This is a fungal infection that is fatal to all elm species. The Elm Bark Beetle is the villain here; it transmits a fungus that blocks the tree’s veins’ ability to move water throughout the tree. The first sign of Dutch elm disease is brown, wilted leaves at the crown of the tree. The sapwood eventually dries up and dies, which is fatal for the infected tree. The fungus can also spread through tree grafting. Watch for this disease during the tree’s late summer growing season. Smart homeowners avoid planting elm trees as the risks of Dutch elm are just too high.

Will Spanish Moss Hurt My Trees?

The idea that Spanish moss is damaging to trees is an urban legend of sorts, probably brought on by the fact that it’s a parasite. What that really means is that the bromeliad (that’s what Spanish moss is, not an invasive parasite), or air plant, anchors itself in the tree but gets its nutrients from the air and water. When you notice it growing on fences, power lines, and other nonorganic objects, you’ll realize that it isn’t a dangerous thing after all. When the moss grows so large that it’s hanging over branches and brushing the top of your cars it’s really graceful and attractive, but at that point, it’s a danger to the tree in that the weight can weaken the host branches during heavy rains.

Does the City of Clearwater Provide Any Assistance in Tree Removal Problems?

The city will remove any hazardous trees that are in public rights of way–typically any city-owned property that fronts any private property, either residential or commercial. If you have questions about city trees, call the Urban Forestry Division at the Public Services Department at 562-4950 (727) 462-6563. The city does not have a set calendar for trimming hazardous trees. That doesn’t make much sense, as trees don’t get diseases or damage on the city schedule, but they will prune or remove as needed. The city does not remove or maintain any trees on private property, but the Urban Forestry Division will be happy to help with pruning techniques and provide information.

Who Is Responsible for Fallen Tree Removal in Clearwater?

As we mentioned earlier, tropical storms and hurricanes are responsible for lots of tree loss in a given year. Then, the question of who’s responsible for a fallen tree becomes a hot issue. Is it the homeowner whose giant magnolia crashed through the neighbor’s garage, or is it the neighbor, who undoubtedly feels like the innocent victim of a random tree assault?

Florida law says that the homeowner is not liable for damages if a tree falls onto an adjacent property and damages an insured structure because of a weather event–the neighbor files a claim with their insurer. If, however, the damage was a result of homeowner negligence–the tree wasn’t maintained properly, you did a bad DIY trim without realizing how important balance is–then the neighbor’s insurance company will recover their loss with your insurance company. Review your policy or ask your insurance agent if you’re liable for damages in case of negligence.

If You’re A Renter?

Lawn maintenance is typically part of the tenant’s responsibility, but tree maintenance is not addressed in the typical lease. Some landlords specify that the tenant is responsible for any tree trimming up to six feet off the ground.

If You’re A Landlord?

The trees on your property are your responsibility. A good maintenance routine only increases your property value, so don’t cheap out on tree care.

If You’re A Neighbor?

You can trim back a neighbor’s tree branches that are hanging over your property. You may not cut back past the property line, and you can’t cut so much that you threaten the tree’s health. If there’s a “boundary tree” that’s on your lot and your neighbors’, you own it equally and have to agree to any maintenance.

How Does the Soil Affect Trees in Clearwater?

The soil in Clearwater is a fine sand–”sugar sand”, as the locals call it. It’s so fine that it can’t hold water or nutrients, but it’s often so compacted from construction that homeowners don’t realize how fine it really is until years later when their trees are failing. Compacted soil isn’t good for trees and other plants either; the roots can’t grow through the soil, and the soil can’t absorb water, so there are problems with runoff. You can loosen compacted soil with a pitchfork, and add soil amendments before you start any landscaping.

If you’re looking for the very best tree to plant in Clearwater, the one that will really thrive in the soil and heat and withstand high winds, it’s the Live Oak, formally known as Quercus virginiana. Live oaks can also handle local pests and salt spray, which may be why the city has decided to name the live oak the official city tree.

Hurricanes are the greatest natural threat to Florida and Pinellas County. They have caused the greatest amount of property damage, and as more people move to Pinellas County, the potential for hurricane-related deaths and damages increases every year. That’s not the weather’s fault, per se; it’s just math. The high winds that are the signature of hurricanes are only part of the damage trees suffer, there is also the large amount of rainfall that comes with big storms. Storm surges are another challenge for local trees, the rising water weakens already-stressed trunks and branches, sometimes causing the tree to topple over from the root. That’s what has happened when you see a thirteen-foot root ball at the base of a fallen tree.

What If Dead Trees Are Near Power Lines in Clearwater?

Florida Power and Utility (FPU) will remove any dead trees or debris that are near power lines. FPU has a tree maintenance schedule for Clearwater; they come every three years to prune back trees that are encroaching on main power lines and six years for neighborhood lines. They will not trim back a tree that isn’t threatening power equipment. That’s up to the homeowner.

The city sends a separate crew to pick up any debris left over from the tree trimming or removal.

The city does ask that you think about where you plant your trees before you start digging that hole–consider where the roots and branches will extend when the tree is mature. If it looks like the tree will be a power line hazard, or the roots will grow under the street, why not move the tree or substitute a smaller specimen?

How Much Does Tree Removal Usually Cost in Clearwater?

How much will it cost to remove a dead or damaged tree in your yard? Our arborists can’t give you a reliable quote without a visual inspection, but these are the things they factor into their estimate. Having your tree branches trimmed back will cost a couple of hundred dollars, while removing a large dead tree can be as much as $1,500 or more.

Size does matter when it comes to tree removal, but not necessarily what you think. Sure, a giant magnolia will set you back at least $1,000–it’s tall, wide, and dense. But a tall skinny pine tree can be just as expensive if the tree is too narrow for our crew to climb. Our arborist has to bring in extra equipment–a bucket truck, in this case–which adds up to greater expense.

The tree’s location also is a factor. If it’s close to the house or garage and the trunk is adjacent to the structure, chances are pretty good there are branches hanging over the roof. This also means we need to bring in more equipment, a bigger crew, and a fine touch to remove the tree without damaging any other property.

The overall health of the tree is the final cost factor. A dead tree costs more to remove than one that’s diseased, because the dead branches are weak and more difficult to remove–we can’t send a crew to climb a dead tree. If the tree is diseased, the infected branches must be disposed of so that the infection doesn’t spread.

Recent Requests We Received From Customers In Clearwater, FL

If I had your number. Small job, tree was cut but left 2 inch stump above ground. Small ornamental tree. Need it ground or cut down the 2 inches so flush to the ground. Looking for best price.

Looking for a company which we can refer and work with on our landscape jobs.