Looking for affordable tree removal service in San Marcos, CA? Great! TreeTriage is at your service 24/7. 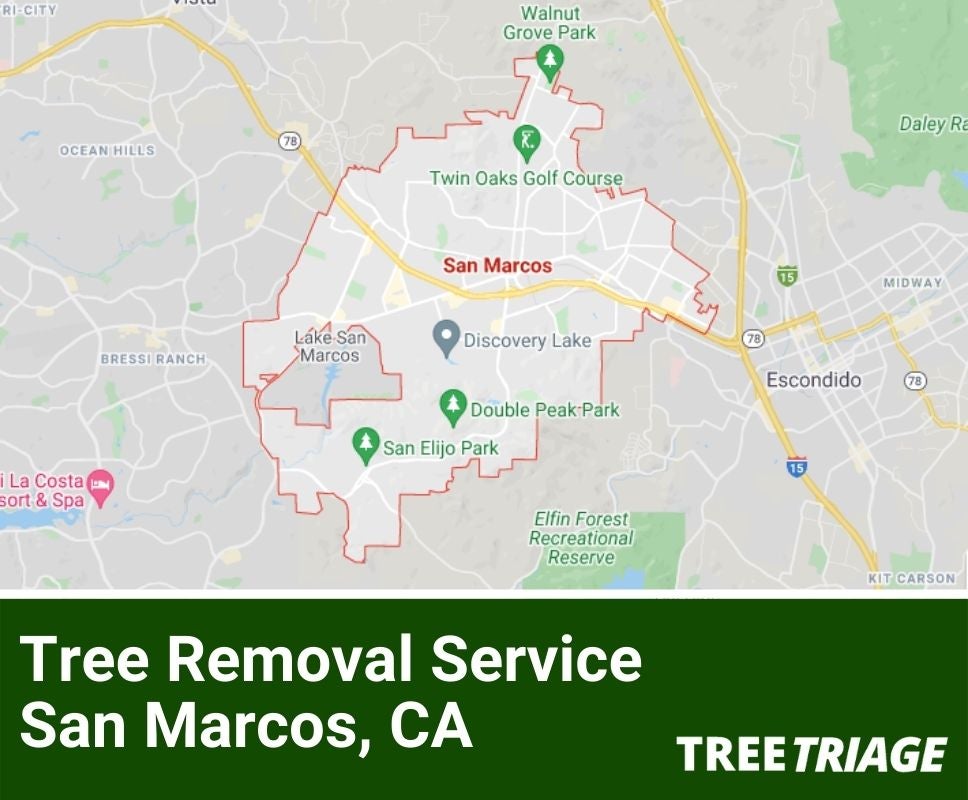 Tell us about your project in the form and we'll get you connected with specialists in or continue reading to learn what you should consider when removing a tree in San Marcos.

What Are the Most Common Tree Issues in San Marcos?

Citrus greening is one of the most common diseases among citrus trees in California and other tropical states. This disease is spread by an insect called the Asian citrus psyllid, and it typically results in bitter and misshapen citrus fruits that stay green after they should have ripened. There is no treatment for trees that become infected with citrus greening, and most die within a few years of the appearance of the Asian citrus psyllid. In the meantime, the fruit and juice they produce are not suitable for consumption and cannot be sold, which can have a significant impact on residents of California, Florida, Georgia, and other states that rely on these fruits as a major part of the state’s economy. For these reasons, owners of citrus trees should carefully monitor their trees for signs of citrus greening and have them removed if symptoms are found to prevent the disease from spreading.

Although Mexican fruit flies generally do not attack citrus trees themselves, they frequently eat mangos and citrus fruits in Southern California, which can have a significant impact on the number of citrus fruits that are able to safely be sold, especially to buyers outside the Southern California area. These fruits should be inspected for Mexican fruit flies and other hungry pests before being moved and sold elsewhere to prevent the spread of these invasive insects.

Sudden oak death, also known as SOD, is caused by a type of water mold pathogen called Phytophthora ramorum. This disease, which is common along much of the West Coast, has no cure and has killed over a million trees in California alone. Sudden oak death most frequently affects coast live oaks and tanoaks, although it can also be found in a wide variety of other species of trees, shrubs, and plants. Some of the most common signs of sudden oak death include spots on the leaves, dead leaves, twig dieback, and cankers or calluses on the bark that allow the sap to seep out.

Although the City of San Marcos is not located along an active fault and is unlikely to directly experience a severe earthquake, low magnitude earthquakes are frequent. Stronger earthquakes along faults in other parts of Southern California can also be felt throughout the region. Although neither of these situations is likely to cause serious damage in San Marcos, some light earthquakes may damage branches, especially of young or weak trees.

Does the City of San Marcos Provide Any Assistance in Tree Removal Problems?

The City of San Marcos offers free yard waste recycling to residents within city limits through EDCO Recycling and Waste Removal. Residents can place a can of branches under four feet long and any other yard waste at their curbs with their other containers on their regular trash pickup day. Free Christmas tree recycling is also available. City residents can drop trees off at the San Marcos Senior Center until mid-January or have them picked up during the two weeks following Christmas. To have trees picked up from their homes, residents need to cut them into pieces that are no more than four feet long and pile them at their curbs on their regular trash collection day.

San Diego Gas & Electric prunes trees and removes brush in San Marcos and throughout San Diego County as needed to meet standards regarding minimum distances from power lines. The electric company may provide a replacement tree if your tree needs to be removed for reasons that are related to your power lines.

Who Is Responsible for Fallen Tree Removal in San Marcos?

In California, fallen tree removal is usually the responsibility of the person who owns the property where it lands. However, California has historically not followed this policy as closely as other states do, and there have been instances of tree owners needing to pay for damage to someone else’s property after a storm.

As a homeowner, you will typically only be responsible for trees that land in your yard. This applies to your trees, your neighbor’s trees, and city-managed trees. The only exception is if your neighbor knew about a problem with the tree that caused it to fall.

Renters are not responsible for fallen trees, including those that land on the property they are renting. You will need to contact your landlord to arrange to have a fallen tree removed.

Landlords are responsible for removing trees that land on their property, but not if their trees land on a neighbor’s property.

As a neighbor, you usually will not be responsible for a tree that lands in a neighbor’s yard unless it is your fault. Refusing to remove a tree you know is diseased, for example, will generally make you responsible for that tree.

How Does the Soil Affect Trees in San Marcos?

Southern California consists mainly of clay soils, which tend to have poor drainage. This can be especially problematic because the area is prone to flooding, and tree roots often sit in waterlogged soil after heavy rain. Adding redwood sawdust, horticulture lava, or fir bark to your soil can help break up compacted soil and create space for air to reach your trees’ roots and excess water to dry.

Although trees in San Marcos generally thrive in Southern California’s year-round warm weather, above-average summer temperatures can be hard on many trees. Most species of trees, including those that are native to the San Marcos area, can overheat if the air around them rises too high. This is especially common when the humidity drops, which tends to happen as the temperature rises because this weather interferes with the tree’s ability to regulate its own temperature through transpiration. Trees that overheat while losing water can also weaken and lose branches, which is quite common in Southern California. Although the temperatures that can actually kill a tree, usually around 115 degrees Fahrenheit, are not common along the coast of California, trees can begin to experience many of these symptoms in any, especially hot and dry weather.

Taking steps to help your trees get enough water is key when it comes to getting them through an unusually hot summer. Although rain may provide plenty of water during cooler months, especially for species that require less water overall, watering your trees is important during a drought. Watering your trees in the morning gives them more time to absorb an adequate amount of water before the sun dries much of what is left in the soil, and adding mulch to the area around your trees is a simple way to help the soil that is closest to them retain water.

Flooding is also common in the San Marcos area. The frequent droughts the area experiences during warmer months make San Marcos more vulnerable to flood damage when the dry soil is unable to absorb sudden heavy rain. The city offers free sandbags to residents when conditions are right for a predicted storm to cause flooding to help minimize damage.

What If Dead Trees Are Near Power Lines in San Marcos?

In California, untrained individuals should not prune or attempt to remove trees that are located within ten feet of an active power line. Residents of San Marcos should contact San Diego Gas & Electric if these problems are detected. Free tree pruning and removal services are generally provided when your power lines make them necessary.

How Much Does Tree Removal Usually Cost in San Marcos?

Tree removal services in the San Marcos area generally range from $275-$2,120, with an average cost of $706. These estimates are somewhat higher than the national average, and some of Southern California’s tallest trees can cost upwards of $2,200 to remove. These figures typically cover the cost of labor for the project, any equipment and machinery that will need to be used, and cleanup. If you are required to obtain a permit to have a particular tree removed, it will usually come with an additional fee.

California is home to many of the largest trees in the world, which can require a larger crew, more specialized equipment, and more time to remove than smaller trees. Although most trees in residential areas do not quite reach the height and diameter of those in California’s national forests, they still tend to be larger than average trees in other parts of the country. Trees between 60-80 feet tall will rarely cost less than $500 to remove, and they can reach $2,000 or more in California if the size is combined with another factor that increases the cost of tree removal.

Removing a tree is not always as simple as cutting it down and letting it land wherever it wants to. Trees that are near power lines or otherwise difficult to get to may take longer and be more difficult to remove than others. Removing trees that are too close to buildings can be difficult to do without damaging the building, especially if the roots need to be removed. Many trees in residential areas need to be cut one piece at a time for space and safety reasons, which can take us longer than simply chopping them down in open areas where there is room to do so.

It is ideal to schedule routine tree removal service with us in advance, which is easier to do when you pay close attention to their condition and growth. Diseased trees and overhanging branches take time to develop, and these usually should not become emergency situations. We do provide 24/7 emergency services, but they will be much more expensive and should only be used during storms or other unforeseeable situations.

Recent Requests We Received From Customers In San Marcos, CA

I need a large tree remove and the stump ground along with two large cypress trees and some rose bushes.

I have a eucalyptus tree that I would like removed in my front yard. Its not very big, maybe 15 feet tall.

I have 3 tall palms that need trimming by ladder. They are as tall as a 2 story house.

need a tree removed from a common area in an HOA.

Tall palm trees to be trimmed.