Looking for affordable tree removal service in Anchorage, AK? Great! TreeTriage is at your service 24/7. 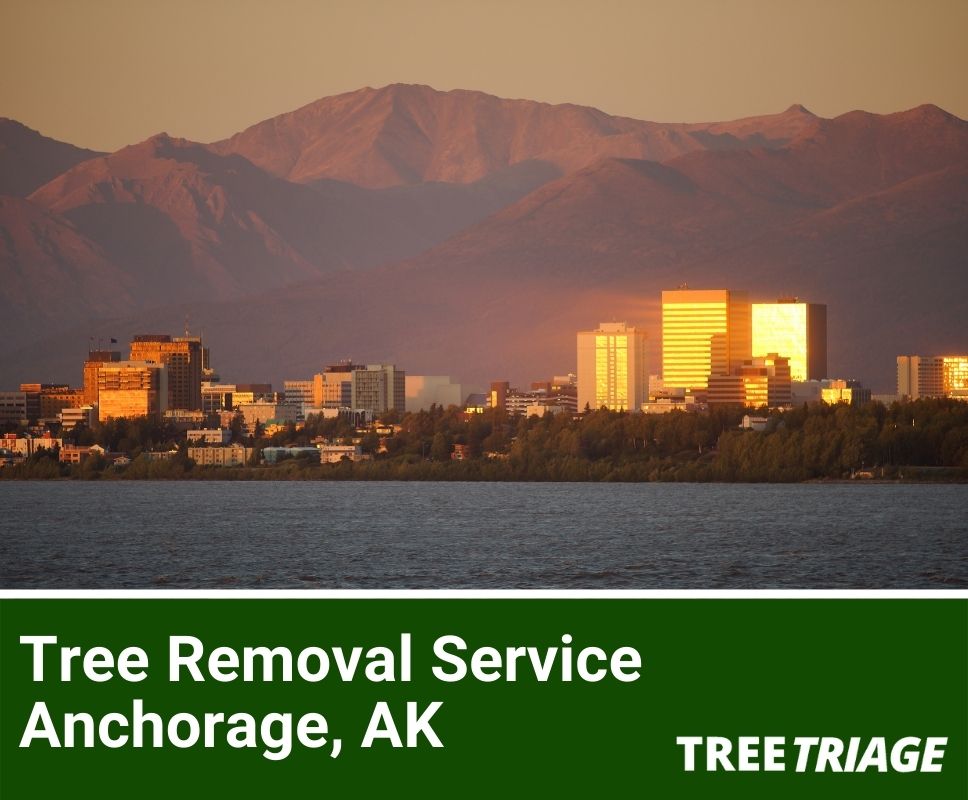 Tell us about your project in the form and we'll get you connected with specialists in or continue reading to learn what you should consider when removing a tree in Anchorage.

What Are the Most Common Tree Issues in Anchorage?

Despite Anchorage’s vibrant wild and plant life, tree canopies have been declining drastically. Spruce, paper birch, quaking aspen, and black cottonwood have continued bowing to threats despite the city’s excellent soils. Most of the challenges can be attested to pest infestation, tree diseases, and changing climatic conditions.

The most common pests feeding on Anchorage trees include beetles, aphids, and a host of other leafminers and leafrollers. For example, the spruce bark beetle has devoured forests of spruce trees across Anchorage municipality and statewide.

The insects usually burrow tiny holes on the bark where they lay eggs. Effectively, they cut short nutrients and water flow to the upper parts of the tree. Once the larvae mature, they move to other trees to create their colonies. Most infestations lead to the death of the trees. However, the pests can be kept off by applying EPA-approved insecticides on the barks.

Another common condition is the spruce needle rust fungus, whose cycle relies on two plants – the spruce tree and labrador tea leaves. The fungus is transported by wind from one plant while halfway through its cycle and completes the cycle in the new host.

Though Anchorage’s climate is temperate, sometimes storms and heavy winds wreak havoc on tree life. Wildfires are prevalent here and are a significant threat to plant life. The situation is made worse by heavy winds that aid fire spread and uproot trees while snapping others. In some parts, permafrost impacts soil quality negatively and consequently ruins tree health.

Does the City of Anchorage Provide Any Assistance in Tree Removal Problems?

Anchorage city does not assist with tree removal. However, it enforces municipal laws that govern the maintenance and care of trees around the city. Property owners are responsible for maintaining their trees. This includes trimming trees to avoid traffic obstruction and safety hazards for those near power lines. They are also expected to remove any nuisance trees, i.e., diseased, pest-infested, dead, or hazardous trees. You may not need to apply for a tree removal permit in Anchorage, but the city expects residents to act responsibly in preserving the trees.

Who Is Responsible for Fallen Tree Removal in Anchorage?

Property line laws are similar across many parts of the nation, and Anchorage is no exception. Landowners are responsible for the maintenance of their trees. In most jurisdictions, this responsibility extends to the public trees on the rights-of-way.

As a homeowner, the city expects you to remove any nuisance or hazardous trees on your property. However, if a well-maintained tree falls and damages your property, your homeowner’s insurance compensation should cater to its removal expenses.

Property insurance only caters to the rented property. Insuring your personal belongings requires taking a separate cover, commonly known as renters insurance. For example, if a tree falls and destroys your belongings or car, the renters’ insurance and car insurance should cover the damage, respectively. For the rest of the property, the landlord’s property insurance should cater to the losses, including tree removal costs. Essentially, the landlord is responsible for organizing the latter.

As the landowner, the landlord should remove any fallen tree on the property. That is if it hasn’t caused any damage. But if a tree destroys insured possessions, the property insurance should cater for the removal costs alongside other sustained losses.

Trees on or near property lines are always a contentious issue. The owners are responsible for their maintenance, but sometimes the neighbors are looped in. If branches are overhanging their property, they have a right to trim them up to the property line, at least in most states. They are also responsible for clearing any branches that snap and fall on their land.

This means if the tree falls on their property, the owner is not responsible for any damages caused. Instead, the neighbor is expected to file a claim with their insurer to pay for the damage. However, if the insurer learns the tree owner neglected it, they can pursue them to recover their loss.

How Does the Soil Affect Trees in Anchorage?

Soils play a central role in tree health, not just in Anchorage but wherever trees grow. Ideal soil conditions are essential for water and nutrient storage, as well as tree support. Usually, soils exist in three grades – sand, silt, and clay. Sand is overly drained, which makes it poor in nutrient and water retention. On the other hand, clay is poorly drained but significant in retaining nutrients. However, due to its extreme compactness, it doesn’t allow smooth nutrient absorption. Silt is in the middle, combining the best qualities of the other two.

These three grades combine in different variations to form either clay, sandy, or loamy soils. Clay soil has a higher clay concentration, often up to 40%, while loamy soil has equal quantities of clay, sand, and silt. Sandy soils have more sand particles than the other two.

Anchorage soil is mainly made of sand, silt, and gravel. It also contains permafrost in some parts. Permafrost is a layer of frozen ground, which inhibits plant root depth. Naturally occurring soils in Anchorage have a low pH of about 4. While some trees thrive in acidic or alkaline soils, most perform best in neutral pH, with a 6.5 being ideal.

Despite the natural state of soils, they can be improved for optimal tree growth. With acidic soils, we recommend liming to raise the pH to an optimal level. Adding organic matter to overly-drained soils also helps improve the texture for better nutrient/water retention and uptake by the trees.

Occasional dry conditions leave behind stressed trees, a situation that increases their vulnerability to disease and pest infestation. Pests are highly drawn to unhealthy trees as they do not have enough sap to flush them out of the burrows.

During drought, the root systems get damaged due to a lack of water. When the rain comes, the damaged roots become susceptible to rot. If the affected roots are not removed, they can spread the disease to the healthy ones, which may eventually lead to tree death.

Anchorage also experiences high winds, which cause a host of problems – from snapping branches, leaving wounds for pests to perch on to drying leaves, causing them to wither and fall. High winds also fan the spread of wildfires, which are pretty common here, especially in spring.

What if Dead Trees Are Near Power Lines in Anchorage?

Anchorage city’s code of ordinances maintains that no trees shall be in close contact with power lines. Landowners are responsible for ensuring all trees near power lines remain trimmed at all times. They are also expected to remove any hazardous vegetation near the lines, including dead and dying trees.

Where a property owner neglects to trim or remove hazardous trees, the city’s director of development services can order the maintenance or removal of such trees by giving a 10-day notice. Once the notice lapses and the owner fails to take action, the director may permit the respective utility company, e.g., Chugach Electric or Municipal Light & Power, to trim or remove the trees.

How Much Does Tree Removal Usually Cost in Anchorage?

Tree removal costs in Anchorage may vary depending on several factors. For instance, we consider factors such as tree size, condition, location, and accessibility when quoting customers. Generally, you should expect to pay between $300 and $1800, but most people spend around $1000 on average.

Size is one of the primary cost determinants, be it in terms of height or thickness. You should expect to pay a lower amount for a smaller tree, say black spruce than you would for a giant Sitka spruce. Trees within the 20-40 ft range usually cost between $300 and $900, while an 80-foot would require $1000 and higher to remove. In the same way, a paper birch, which is often thin, takes less time to saw through the trunk, hence costs much lower than a tree with a thicker trunk.

We often charge customers based on where the tree is situated. For instance, if the tree is overhanging a building or a power line, you should expect to pay a higher cost to cater to the added risk. In most cases, we may need to use either a crane, bucket truck, or both to remove the tree, equipment that may not be necessary if the tree is in an open field. The additional equipment escalates the cost.

Removing a dead or dying tree costs more than a healthy tree. While our team can climb up a healthy tree to cut and rope down pieces of the trunk or branches, unhealthy trees are risky, hence require using equipment instead. Again, removing a tree that has fallen in an open field is much cheaper than one atop a building. Removing the latter has an added aspect of risk, which we factor into the cost.

Recent Requests We Received From Customers In Anchorage, AK

We have a magnolia tree that needs trimming and shaping. It is tall but not big in circumference. Part of it is over our garage. Need Quote!

We'd like to get a quote on removing a Crape Myrtle along with its roots. This tree is located on the west side of our front yard. Thank you!

Cleaning of bushes and removal of already broken branch of a tree. Thanks!

3 shrubs removed from front of house.

Large choke cherry in back yard.